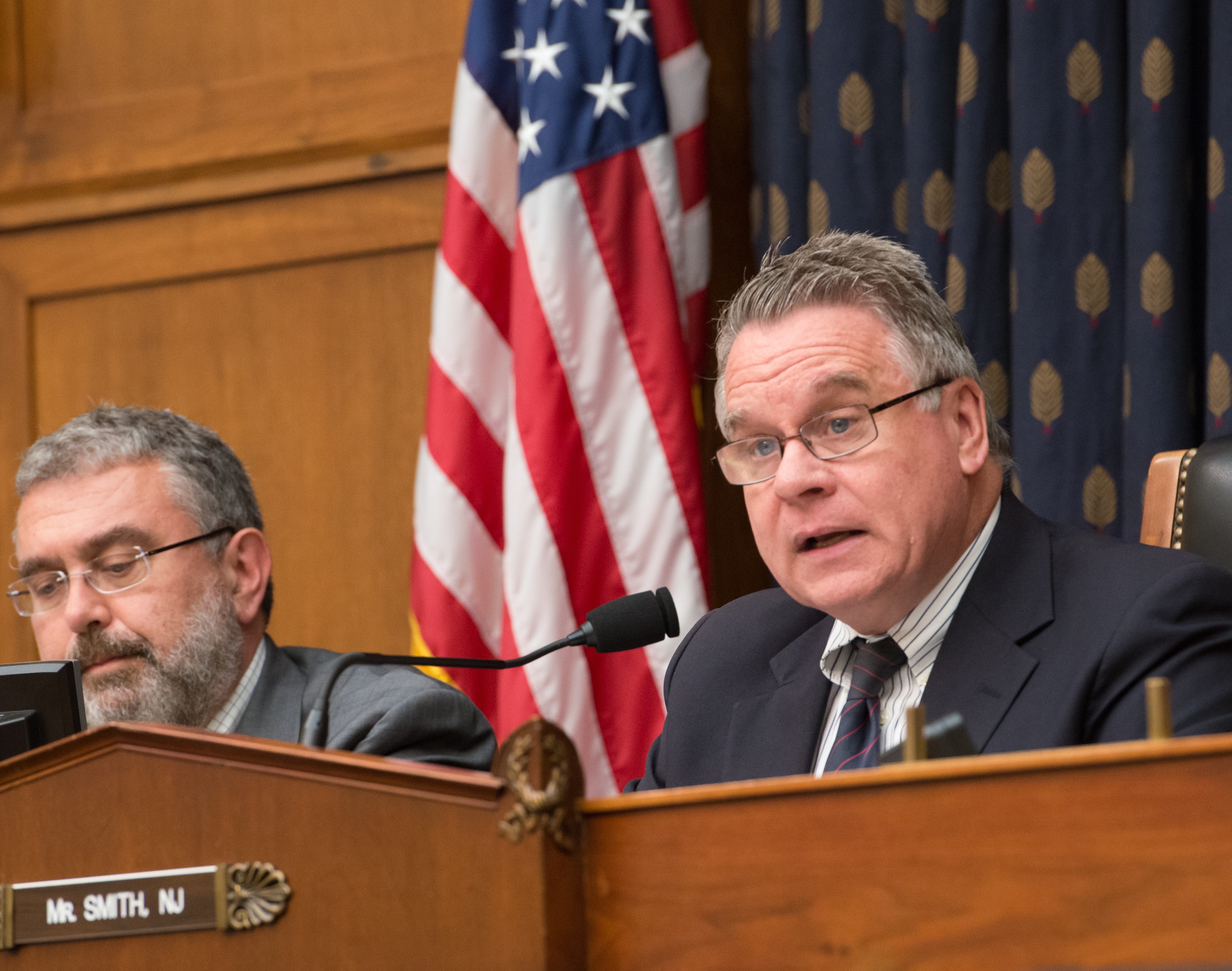 Rep. Chris Smith, R-N.J., speaks during a hearing on genocide in Iraq and Syria held Oct. 3 on Capitol Hill in Washington. Smith, who is senior member of the House Foreign Affairs Committee, chaired the hearing. (CNS/Erin Granzow/House Office of Photography)

U.S. Rep. Chris Smith, R-New Jersey, blasted unnamed "career staff" at the State Department and the U.S. Agency for International Development for inaction that he said will lead to further genocide of Christians, Yezidis and other religious minorities in Iraq at the hands of Islamic State militants.

He said that IS militants began committing genocide against Yezidis and Christians in Iraq in 2014, and "three years later, they are still not receiving the assistance they need from the United States and so their survival in their ancient homelands is in jeopardy."

Smith made the comments in opening remarks at an Oct. 3 hearing he convened as chair of the House Subcommittee on Africa, Global Health, Global Human Rights and International Organizations.

He noted that the State Department and USAID "were invited to testify," but "they were unavailable."

Smith said he has met recently with Mark Green, the new USAID director, and "my hope is that he will act upon that request" for assistance.

"Imagine that," Smith said. "End of Christianity in Iraq."

He said the Christian population of Iraq has plunged from 1.5 million to 250,000 during the past 14 years, since the U.S. defeat of Saddam Hussein and ethnic conflicts that have raged since then.

"I am sad to say that if bold action is not taken by the end of the year, I believe a tipping point will be reached and we will see the end of Christianity in Iraq in a few short years and a loss of religious and ethnic diversity throughout the region -- a loss which will not be regained and could result in further destabilization, violent extremism and terrorism across the Middle East. In other words, ISIS will have been victorious in their genocidal rampage unless concrete action is taken," Wolf said.

He called for the White House to establish an interagency coordinator to "guarantee that the needs of these communities are adequately addressed to ensure their safety and preservation consistent with United States foreign policy."

Militia groups, some backed by Iran, "are filling the vacuum left post-liberation." Wolf called it "part of the Iranian goal of creating a land bridge from Iran" that eventually will ship fighters and weapons to Hezbollah in Lebanon, which would be "a direct threat to Israel and the United States military as well as others in the West."

Smith and Wolf both called for Senate passage of a bill co-authored by Smith and Rep. Anna Eshoo, D-California, called the Iraq and Syria Genocide Emergency Relief and Accountability Act, or H.R. 390.

The measure would help ensure U.S. assistance actually reaches the survivors of genocide. It gives "explicit authorization for the State Department and USAID to identify the assistance needs of genocide survivors from religious and ethnic minority communities and provide funding to entities, including faith-based entities, effectively providing them with aid on the ground," the bill says. "This is essential, because some within the State Department and USAID have claimed they lack the authority to deliberately help religious and ethnic communities, even if they are genocide victims and will become extinct without assistance."

The bipartisan bill passed the full House in June. Besides introducing legislation, Smith has held 10 hearings focused in whole or part on atrocities in Iraq and Syria against religious persecution.

At the Oct. 3 hearing, emotional testimony about sex slavery came from Shireen Jerdo Ibrahim, a 31-year-old member of an extended Iraqi Yezidi family, speaking through a translator. Yezidis are ethnic Kurds who practice a faith derived from Zoroastrianism with elements of both Christianity and Islam.

Before she was able to escape, Jerdo Ibrahim spent more than nine months in IS captivity after militants rounded up her family and hundreds of others near Sinjar in August 2014.

After being shuttled to a couple of jails, "I was sold to a person from Raga city in Syria. In Raga, they tortured me because I refused to talk. From Raga they sold me again to a person from Mosul. I was sold and bought as a cheap commodity more than five times."

Stephen Rasche, director of resettlement programs for the Chaldean Catholic Archdiocese of Erbil in the Kurdistan Region of Iraq, told the subcommittee that since he testified a year ago on the needs of Christians in Iraq, "I regret to say that we have still yet to receive any form of meaningful aid from the U.S. government."

"I wish that I could tell you that in the 12 months that followed that our pleas were heard, and that our plight has found relief," he said. Rasche noted that over the last three years, the Archdiocese of Erbil has repeatedly asked the State Department and USAID for humanitarian help.

Since 2014, he said, the archdiocese has provided almost all the medical care, food, shelter and education for the more than 100,000 Christians who had to flee IS, as well as aid to some Yezidis and Muslims.

Lauren Ashburn, who is managing editor and anchor of EWTN News Nightly, recounted her recent visit to Batnaya, a Christian enclave in northern Iraq liberated by Kurdish fighters in November 2016.

"The Catholic church in the center of town is standing only because ISIS used it as its command center," she said. "But it has been severely damaged and desecrated. A statue of the Virgin Mary is decapitated, and other statues are smashed to bits.

"The face of Jesus has been ripped from paintings, and bullet holes mark where a cross once was. Every Christian symbol I would see has been defaced or obliterated. I couldn't hold back my tears," Ashburn added.