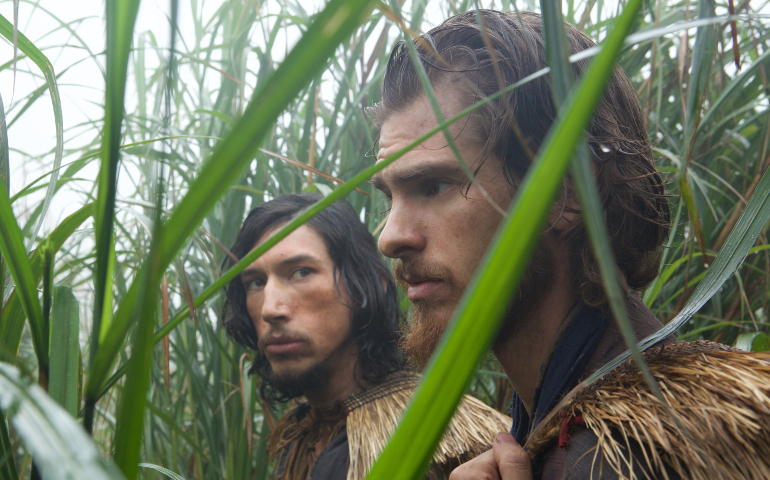 "Silence" is a recent film adaptation by Martin Scorsese of Japanese author Shusaku Endo's 1966 novel. The film tells the story of two young Portuguese Jesuit priests who travel to Japan in the 17th century to find their mentor, Fr. Ferreira (Liam Neeson) who is reported to have apostatized. It is a long journey from Portugal to Rome, Goa, Macau and finally Japan, where Christianity is outlawed.

But this journey is nothing compared to the long spiritual journey of Fr. Rodrigues (Andrew Garfield) once he lands in Japan. He eventually finds Ferreira and discovers the mercy of Christ in a cauldron of doubt — and silence from the Jesus of his youth. If you have been reading NCR's other articles on "Silence," or read the novel, or seen the film, you know that Rodrigues, too, apostatizes by stepping on the image of Christ to save the lives of his fellow Christians. It is a soul-wrenching moment.

The image that guides the film and our Lenten journey is Christ crucified. It draws us, even compels us, to turn our gaze toward Jesus on the cross during Holy Week and on Good Friday in particular. Contemplating the crucifix, we come to understand that Christ is with us in our suffering to comfort us — even if we doubt it. The final scene in "Silence" directs our gaze to the crucifix lying in the hands of the deceased apostate priest Rodrigues. Why does Scorsese do this when it is not in the novel? What are we to make of it?

After re-reading the book and watching the film a record four times, I am struck that amid the revolving paradox between faith and doubt, mercy endures and sustains the narrative. The mutuality of mercy activates the story arcs of those whom I think are the four main characters: Rodrigues, Ferreira, Kichijiro (Y-osuke Kubozuka) and the Japanese Christians epitomized by Mokichi (Shin'ya Tsukamoto). It is impossible, I think, to appreciate "Silence," to even begin to understand it, without recognizing the quality of human and divine mercy functioning as grace in the lives of the characters and how Christ on the cross, with his promise of hope, draws everything together in the end.

What is the quality of Rodrigues' mercy? In his first months in Japan, waiting, ministering and searching for Ferreira, his faith seems invincible. He absolves Christians of their sins. It takes some time for Rodrigues and his companion, Fr. Garrpe (Adam Driver), to learn that Kichijiro is an apostate Christian. The poor man carries a heavy burden of guilt, and Rodrigues absolves him in confession.

When Rodrigues ventures into another village, he gives out crosses and crucifixes and even the beads of his rosary, one by one, as he wonders, "I worry they value these poor signs of faith more than faith itself. But how can we deny them?" At this point, Rodrigues' mercy is paternalistic; he cannot imagine the role one of these "poor signs of faith" will have in his future. Early on, in the shack where the two priests first shelter, Mokichi, a Christian, sees the crucifix around Rodrigues' neck, and, kneeling before the priest as they sit on the floor to eat, presses it to his forehead. Rodrigues takes it and gives the crucifix to Mokichi who kisses it and hangs it around his neck.

Not too long after that, the samurai come to the village to test the people and arrest any who are Christians. Before his own martyrdom, Mokichi presses a small, simple hand carved crucifix into Rodrigues' palm. Mokichi is the one who was puzzled when Rodrigues told the community to trample on the fumie, the image of Mary and Child or of Christ, rather than admit their Christian faith and be killed. Mokichi does not judge Rodrigues, however. Instead, he gives Rodrigues a precious crucifix that he had carved for the jiisama, or lay leader, after the priests had left or were killed.

Rodrigues is very moved. Mokichi explains that this crucifix is the only religious image they had until he and Garrpe came. "But now we have so much more. From you." When Rodrigues shakes his head no, Mokichi says, "I have another. The one you gave me. I will always have it. You take this. Please. In Jesus' name."

It is this crucifix that to Rodrigues, through every suffering, moral, spiritual and physical, represents the presence of Christ in each jarring moment of his long life. It is a symbol, a sacramental; he will carry with him unto his own death aided by the secret mercy of a wife he never asked for or wanted. Mokichi is a man of mercy who has no idea what his loving gesture will come to mean to the padre.

Before they part, Rodrigues tells Mokichi, "Your faith gives me strength. I wish I could give as much to you."

To which the kind, gentle man replies, "My love for God is strong. Could that be the same as faith?"

"I think it must be," Rodrigues answers, as Mokichi folds the priest's fingers around the crucifix.

Ferreira, the priest who stepped on the image of Christ to save the lives of Christians, is now a stoic enigma. He is living as a Japanese person, a Buddhist, writing academic books for the people and even one book against Christianity. After he meets Rodrigues for the first time to convince him to apostatize, we see that the younger man is incredulous that Ferreira could have fallen so far from his own ideal of how a Jesuit priest should be and act. Later, after Rodrigues steps on the fumie to save five Christians, they are forced to work together to identify Christian items being brought into the country by Dutch traders.

The last line of dialogue between the two men occurs when Rodrigues finds a cross hidden in the pocket lining of a pair of sailor's trousers. He hands it over to Ferreira who hands it to the Japanese who dispose of it. When Ferreira sees the look of disdain toward the Japanese on the face of Rodrigues, he quietly says: "We were taught to love those who scorn us."

Rodrigues replies, "I feel nothing for them."

Ferreira shrugs and says, "Only our Lord can judge your heart."

Ferreira has the final word: "I doubt it."

And thus, in this play of words, Ferreira gets to the core of God's silence — that dance between doubt and faith, hope and mercy. He is still Rodrigues' teacher and mentor. Hidden in the older man's words are the mercy of faith and hope. If Rodrigues doubted Ferreira's inner reality before, now he realizes that Ferreira's soul still lives. Grace, that unconditional and mysterious gift of divine presence and help, bolsters Rodrigues so he can now go forward to rebuild his relationship with Christ through trust in God's grace and mercy. And he still has the crucifix that Mokichi gave him. Why does Rodrigues keep it?

What can we say of Kichijiro, who, with Rodrigues, appears in the story from the beginning almost to the end? He is a miserable drunk when the priests find him in Macao. We find out his backstory: After he stepped on the fumie to save his family, he despairs because the samurai killed them anyway.

He finally asks to confess his sins, and Rodrigues absolves him in the name of Christ. But Kichijiro apostatizes again and again, fleeing the scene only to return or be brought back to where Rodrigues is imprisoned, to ask forgiveness, for absolution.

The mutuality of their mercy is shown in one of the most iconic scenes in the film, one I did not notice until my third viewing. It is seared in my memory. As Rodrigues settles into his new reality, a virtual prisoner in his own house, Kichijiro becomes like a servant to him. But the weak man cannot escape the guilt of his many acts of betrayal. Rodrigues, who has every reason to detest Kichijiro for his role in the priest's capture, thanks the man for being with him. He can tell Kichijiro wants to confess again and he refuses him because "I am a fallen priest."

They go back and forth. Kichijiro tells him that he suffers for his many betrayals. Finally, Kichijiro, kneeling, leans toward the priest who lays his left hand on Kichijiro's head and extends his right in a gesture of supplication.

In this silent moment, Rodrigues hears the voice of Jesus, "I suffered beside you. I was never silent."

Kichijiro's journey is not over. The authorities discover an amulet around his neck. When they open it, there is an image of St. Paul on one side and St. Francis Xavier and an angel on the other. He is arrested, and we never see him again.

Matthew Malek, one of the film's executive producers, believes that Endo would have approved of Scorsese's ending of the film, with the close-up of Mokichi's crucifix in Rodrigues' hands, because he would understand that cinema required this hopeful ending in the face of despair. "Endo," Malek told me in an interview, "would have no opinion on how it was done because he would understand what art is."

"Silence" as a work of art transcends human frailty, sinfulness and doubt. "Silence" takes us on a journey we would most likely not take on our own. We are left with a sense of mystery and questions about the choices the characters make, their doubt and faith. The one question we need not ask, however, is about the meaning and quality of Christ's love, grace and mercy when we contemplate his death on the cross and the promise of his resurrection.

After finishing the film (or the novel), list three or more words that describe your own faith. Share them with others if you can.

—from Faith Stripped to Its Essence: A Discordant Pilgrimage Through Shusaku Endo's Silence (ACTA)

[Sr. Rose Pacatte, a member of the Daughters of St. Paul, is the Director of the Pauline Center for Media Studies in Los Angeles. "Silence" will be released on DVD March 28.]

A version of this story appeared in the March 24-April 6, 2017 print issue under the headline: Divine mercy functioning as grace.