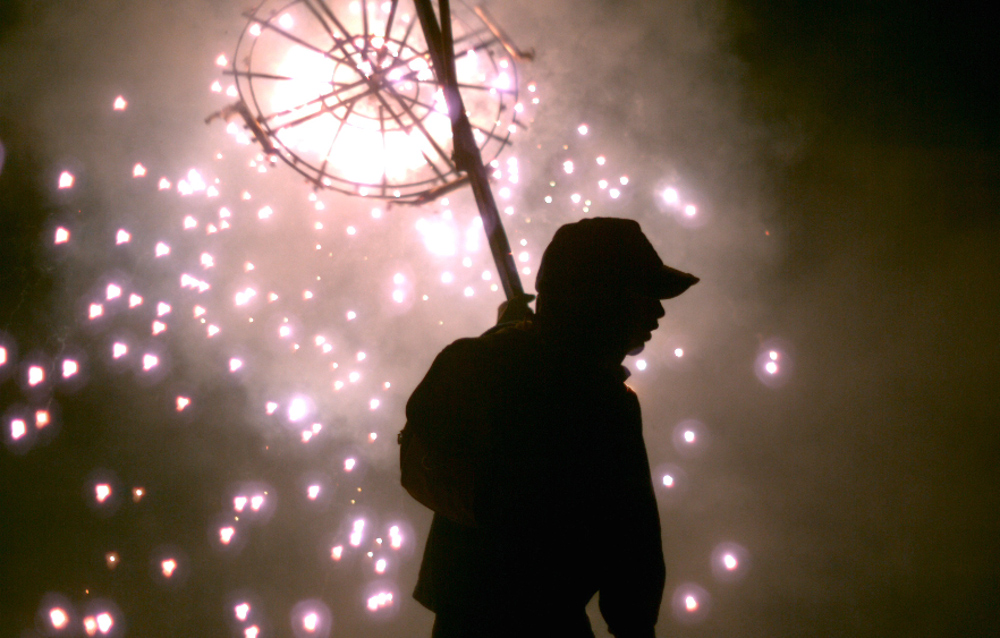 A scene from the film "Brimstone & Glory" (Oscilloscope Laboratories)

In the opening sequence, we see a man quickly darting out of harm's way as he lights with a match what looks like homemade fireworks set on a wooden frame. Igniting in rapid bursts that spell out "Bienvenido San Juan de Dios," the fireworks display joins a cacophony of others that usher in a street procession of a Catholic saint statue.

We have just entered the northeastern Mexican municipality of Tultepec during the 10-day period in March commemorating the feast of San Juan de Dios, a 16th-century Portuguese-born saint who is considered the patron of firefighters. Ironically, he is also the adopted patron saint of Tultepec's firework-makers.

A documentary is commonly understood as a factual recording of life as it happens. But in Viktor Jakovleski's Spanish-language film "Brimstone & Glory" — from Court 13, the group that gave us the critically acclaimed "Beasts of the Southern Wild" (Benh Zeitlin, USA, 2012) — the imaginative use of stylistic options interweaves a mytho-poetic layer into a straightforward, albeit astonishing, slice of Mexican religious folk culture.

The camera follows an adolescent boy twirling firecrackers on each hand while running to join other kids at play. His name is Santi, the son of Tultepec firework-makers. He narrates a short version of the saint's life, describing how he saved a number of patients from a burning hospital building and was miraculously free of any burns or injuries.

We then see a close-up shot of Santi still twirling the firecrackers, but rendered in slow motion — his smiling face intermittently bathed in light and shadow as the lilting musical score rises to a crescendo.

We are no longer just in Tultepec. We are invited into a liminal space, a surreal threshold where the curtain that separates finitude and transcendence has been partially drawn. Through the eyes of a child, we are able to behold the sublime beauty of the fireworks in awe and wonder.

For the months building up to the two major events of the San Juan de Dios fiesta, both of which have only bare allusions to the saint's spirituality apart from the literal motif of fire, some 30,000 firework-makers are hard at work making the necessary preparations. Requiring direct contact with gunpowder and volatile liquids, the tasks at hand are fraught with real, palpable danger. 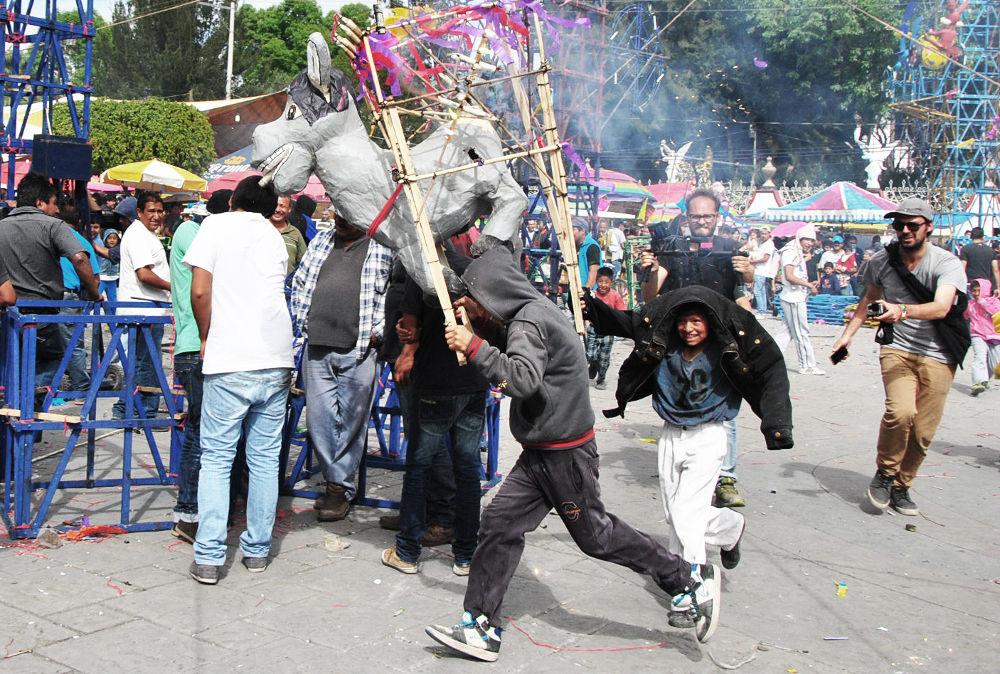 Within this bubble in time, the Tultepec community is given a freeing moment, a chance to experience a glimmer of eternity in a life that is all too often marked by the stigmata of human struggle. (Oscilloscope Laboratories)

The first of the events is the burning of the castillos, where castle-like structures are ignited for a spectacular fire and light show. Perilously tall and supported only by flimsy wooden frames stacked on top of each other, the piece-by-piece building of the castillos is a hypnotic, nail-biting trip.

To achieve this, Jakovleski strapped a GoPro camera on the head of Chincolas, one of the chief builders, so that we, the audience, climb up the structures with him, and get an unnerving bird's eye view of more than 100 feet. It is difficult not to admire the artisans' audacity and nerves of steel.

On the night of the "burning," the towering infernos spit uncounted slivers of untamed fire for thousands of thrilled spectators. For sure, these are not the benign, digitally precise fireworks displays from your usual Fourth of July celebration or a night at Disney World, but Santi, who is shown in close-up, is bewitched by the magic of it all.

The more awaited event of the two is the burning of the toritos, where colossal, mobile papier-mâché bulls are ignited and pushed across town by a frenzied multitude, like a fireworks version of the San Fermin fiesta's "running of the bulls" in Pamplona, Spain. Colorful works of art on wheels, the toritos themselves are a sight to behold, no minor miracle of folk creativity and ingenuity.

When the bulls detonate into a grand fireworks display, the film presents a dramatic montage of scenes, a dreamscape painted in light. Essentially shooting low-tech with high-tech, Jakovleski lenses the event with a loaned state-of-the-art Phantom camera. The visual effect is impressionistic, infusing the scenes with a mesmerizing cosmic glory. Set to a rousing musical score, we witness how, in a dance of euphoric daredevilry, the men of Tultepec frolic dangerously within the range of the shooting sparks.

From the optic of the outsider, the sparks are a rainfall of fiery darts — a threatening situation of insane recklessness. But through the eyes of Santi, the sparks are stardust — a celestial event of inspired madness. Within this bubble in time, the Tultepec community is given a freeing moment, a chance to experience a glimmer of eternity in a life that is all too often marked by the stigmata of human struggle. Credit, of course, goes to San Juan de Dios, the fireproof saint.

"The scars on our skin are from when the saint reaches down to pull us from the fire," Santi explains in a tone of pure innocence.

As I virtually journeyed into the world of the Tultepec firework-makers in "Brimstone & Glory," words from the book of Isaiah rang through my mind, "When you walk through fire you shall not be burned, and the flame shall not consume you." 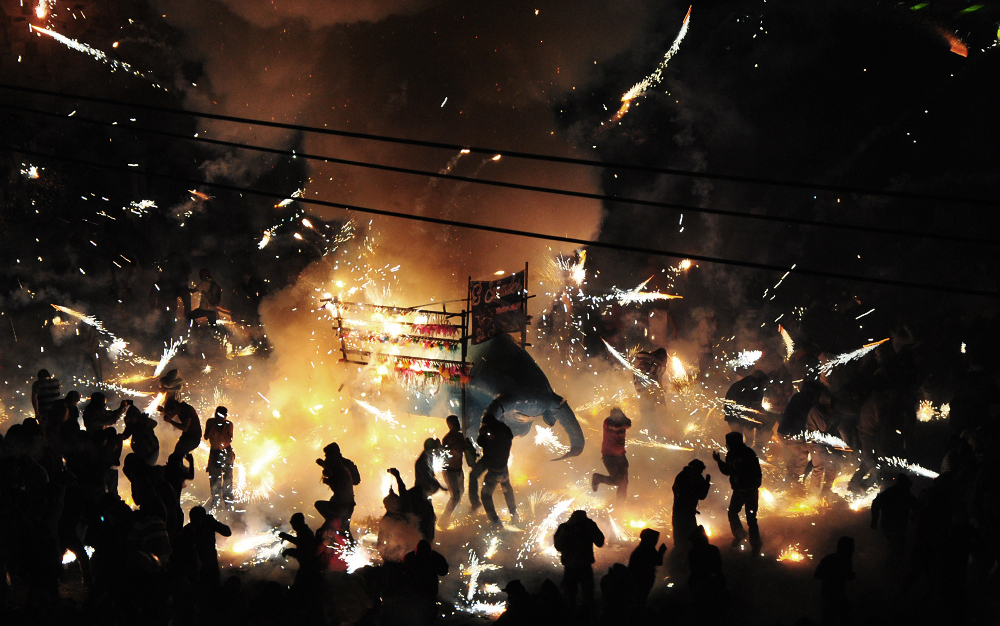 We witness how, in a dance of euphoric daredevilry, the men of Tultepec frolic dangerously within the range of the shooting sparks. (Oscilloscope Laboratories)

Yet the film exposes the shadow side of the celebration — eyes bloodshot from scorching, smoke-filled air inhaled by young and old alike, missing fingers from the hands that work in the cottage industry that feeds the town. The Mexico News Daily reports that in the 2018 festival alone, more than 500 people were hurt from the pyrotechnics revelry.

Curiously, the paper also reports that this year, most injuries were minor and there were no fire-related deaths.

Who am I to question Santi's narrative that the good saint had, indeed, delivered his people from the flames?

[Precious Blood Br. Antonio D. Sison is associate professor of systematic theology at Catholic Theological Union and author of the book The Sacred Foodways of Film (Pickwick, 2016). "Brimstone & Glory" is available on DVD and video streaming from Court 13 and Department of Motion Pictures.]

A version of this story appeared in the June 1-14, 2018 print issue under the headline: A glimmer of eternity.