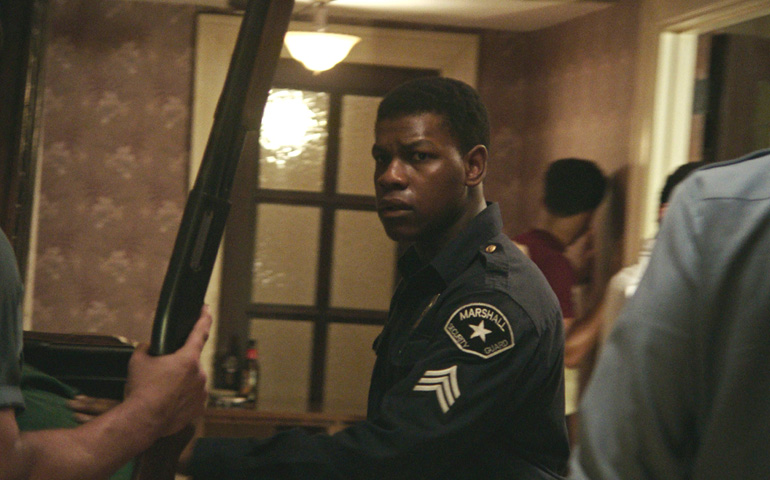 John Boyega stars in a scene from the movie "Detroit." (CNS/Annapurna Pictures)

In 1966 Martin Luther King Jr. told Mike Wallace in an interview, "I think that we've got to see that a riot is the language of the unheard." On the third night of the Detroit riots in July 1967 something so egregious happened at the Algiers Motel that it almost defies telling. Yet Kathryn Bigelow, the fearless Oscar-winning director of The Hurt Locker (2008) and Zero Dark Thirty (2012) and Oscar-winning Mark Boal through sight and sound give voice to the unheard in the Detroit uprising with empathy and deeply felt outrage.

The film opens on Sunday night, July 23, 1967. Police raid a "blind pig" or unlicensed club. Someone throws a bottle at police who have arrested and gathered more than 80 people outside waiting for transport to jail. After the police leave people begin looting stores on 12th Street. A Molotov cocktail is thrown. Fires break out and chaos spreads. City police, state police and the National Guard are called in.

On the evening of July 25, Martha and the Vandellas are performing "Nowhere to Run" at a downtown Detroit theater. A new group, The Dramatics, yet unsigned to a record deal, are in the wings waiting to perform. They are excited because Motown executives are in the audience. All of a sudden, the concert is cancelled because of the riots and everyone is told to leave. The lead singer, Larry Reed (Algee Smith), cannot believe their big chance is gone, just like that.

The band members take a bus towards home but are forced to get off. The young men separate with Larry and his band mate heading toward the Algiers Motel. They book a room in the annex and then hang out with a group of brothers and two white girls from Ohio. Somehow not everyone is taking the violence in the city seriously. Carl (Jason Mitchell) has a toy gun (or a starter gun; it's unclear) and he shoots it out the window toward a line of National Guardsmen. Greene (Anthony Mackie) is just home from Vietnam. He tries to stop Carl but it's too late.

It's no joke, however, when three Detroit cops, headed by the 24-year-old Officer Krauss (Will Poulter), enter the motel annex and round up everyone they can find. Melvin Dismukes (John Boyega) is a security guard from a local business who tries to help calm things down (or maybe ingratiate himself with the guards?). Determined to find the shooter and the gun, a night of sheer terror unfolds perpetrated by the cops that will leave three men dead, several beaten and all terrified, at the motel.

Dismukes becomes the scapegoat for the brutal actions of the police and all four are arrested and eventually tried for murder.

Hannah Murray who plays Julie Ann, one of the white girls traveling around that summer, told me at the screening I attended that it took a month to shoot all the scenes in the Algiers Motel. I cannot imagine how the filmmakers and actors were able to stay in character and sustain the violence and fear of that night over so many days. Bigelow makes watching the horror a visceral experience for the audience that intrigues as it repels. It made me shed tears, though I am not sure if it was from anger or frustration that since the suffering and injustice of that night so long ago almost nothing has changed when it comes to police getting away with murdering black people.

The intense dramatic violence in that small motel annex felt claustrophobic. Bigelow knows how to make you feel everything.

Will Poulter is an excellent young actor who stands tall and menacing at 6'2". I first encountered him when watching the lovely 2007 film "Son of Rambow." He played a redeemable 13-year-old bully then but has now certainly grown up. His arched eyebrows and blank stare lend such menace to his visage that he doesn't have to say a word to instill terror and intimidate his captives that he has lined up against the wall.

I suppose the story's arc and demand for justice of some kind required the depiction of the trial that took place after. Actually, there were separate trials beginning in 1968 but in the film the three policemen and Dismukes are all tried together. I understand why the trial is included (with John Krasinski as the defense attorney) but I did not find the court scenes truly satisfying; I think the trials deserve their own movie. On the other hand, the short shrift given the idea of justice for the cops and those killed or terrorized by them in the swift, choppy, one-sided trial, especially Krauss, may be a way of showing exactly what happens today. White cops get off and trials do not render justice.

All the actors give more than credible performances; no one overreaches. Direction is tight and focused. Oh, so focused.

"Detroit" does indeed give voice to the oppressed, even at the distance of five decades. If one takes a cinema divina approach to the film, after lectio (attending), meditatio (meditating), and contemplatio (contemplating), comes oratio (praying) and finally, actio (action). What then, must we do (Luke 10), after watching a historic drama such as "Detroit"?

Just as "Detroit" hits theaters nationwide August 4, a small documentary first shown at Sundance in January is in release entitled "Whose Streets?" it's a five-chapter, on-the-ground look at the killing of Michael Brown on August 9, 2014, and the rioting — or, as some would say, uprising — that occurred after. It's nonlinear and doesn't pretend to be chronological or precise. Its somewhat chaotic moments are real footage of what took place and interviews with people who were there and protested afterwards. They mark the anniversary not of Michael Brown's killing but the one-year mark for the day now ex-cop Darrell Wilson was acquitted of his murder. "Whose Streets," by filmmakers Sabaah Folayan and Damon Davis is an impressive, angry asphalt bookend to Bigelow's "Detroit."

One can do cinema divina with "Whose Streets?" too. The incidents are more recent and the threat of these shootings, show trials and uprisings happening again more immediate.

No, not much has changed. What then must we do?