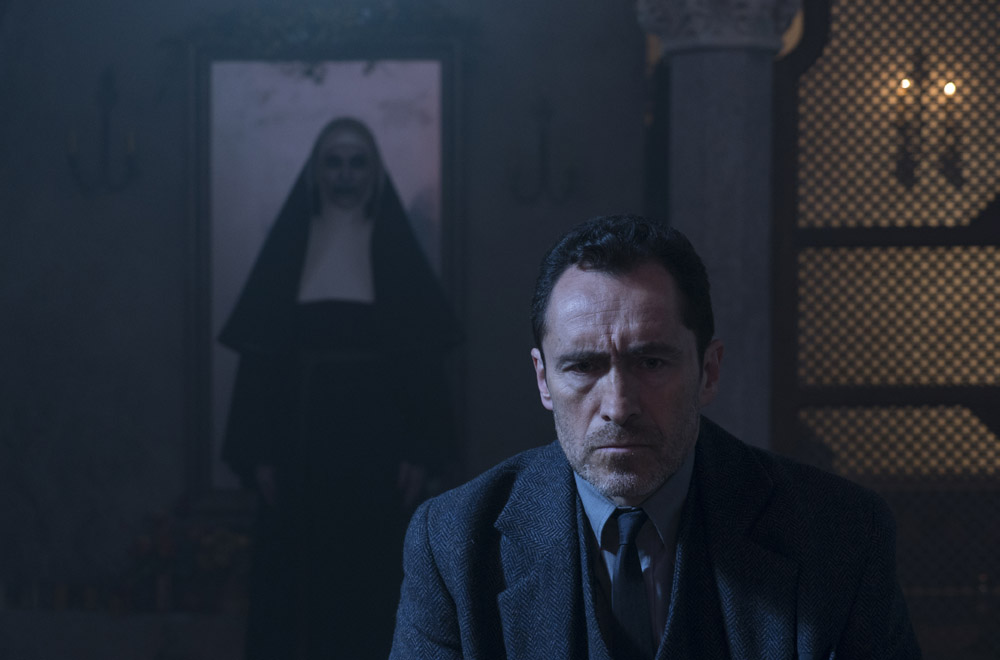 Demián Bichir as Father Burke and Bonnie Aarons, left, as the title character in "The Nun" (Cos Aelenei/Warner Bros. Entertainment Inc)

As I begin this review, let me say that there are two Catholic theological aspects of this film that are accurate: one is that the devil exists, and the other is that Mary, the Mother of Jesus, will show us the way.

"The Nun" is the fifth exorcism-inspired film of "The Conjuring/Annabelle" franchise. With a screenplay by Gary Dauberman (co-writing the story with James Wan, director of the first two "Conjuring" films), who wrote two of the "Annabelle" films and co-wrote "It" (a horror film I really liked), and directed by Corin Hardy ("The Hallow"), "The Nun" is a scare-fest with a very thin plot, one-dimensional characters, and a premise that shows little familiarity with actual Catholicism. In fact, I was more bothered by this than the sight of possessed nuns with gory faces infesting the night with fright.

At the international press day in Mexico City, Warner Bros. put on an impressive experience for those of us fortunate enough to attend. The screening and interviews took place at the Desierto de los Leones, a former monastery of Discalced Carmelites built in the very early 1600s. Located about an hour outside of Mexico City (depending on traffic), today it is part of a beautiful national park. The monastery itself is still very primitive and if you are the type to scare easy, who knows what you might see after seeing a horror film about, well, nuns and devils. Two actors took us through rooms and a cemetery set up as the monastery in the film. It was very clever and by far the most immersive experience I have ever had at a press day! 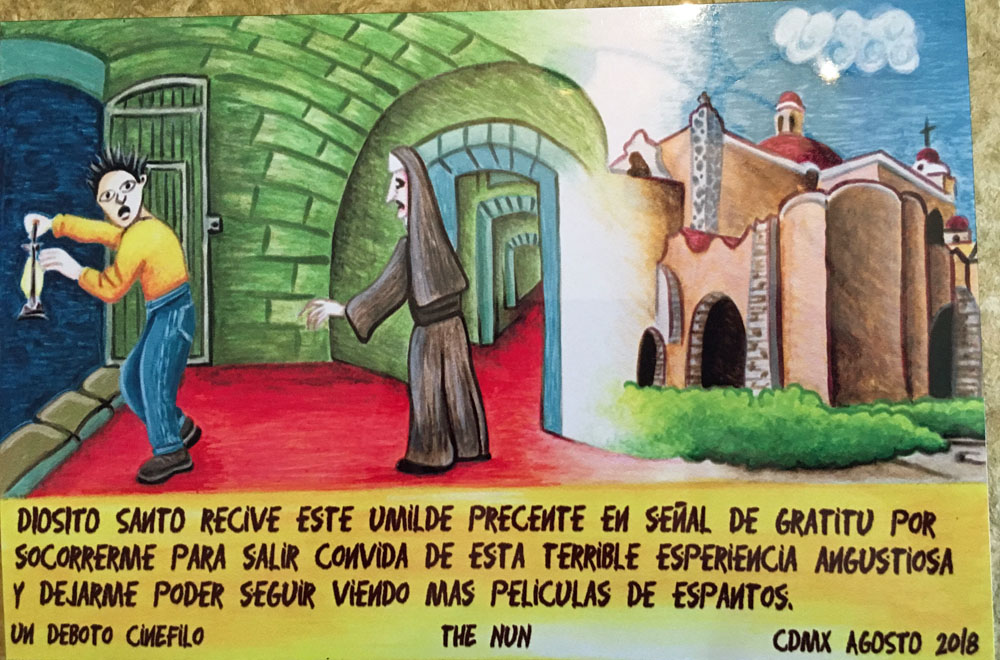 An ex-voto, a painting on a metal plate as an act of devotion, a gift from the studio the author found in her hotel room (Rose Pacatte)

If it hadn't been for the gift each journalist found in their hotel room after the press interviews, I would not be very well disposed toward this film. But they gave us a traditional Mexican "ex-voto," a painting on a metal plate as an act of devotion. The prayer reads, "Dear God, please receive this humble gift as a grateful offering for helping me survive this terrible and anguishing experience and letting me continue to watch horror films. - A devoted moviegoer."

I had to laugh. I won't take "The Nun" too seriously if you won't. 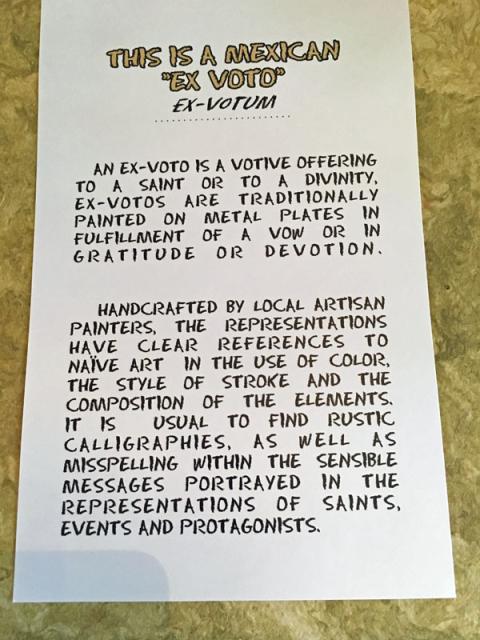 An ex-voto, a painting on a metal plate as an act of devotion, a gift from the studio the author found in her hotel room (Rose Pacatte)

The film opens in 1952, a prequel to events that will unfold in "The Conjuring 2" (2016) where a nun, Sister Valak (Bonnie Aarons), shows up in the dreams of Lorraine Warren (Vera Farmiga), a real-life character who with her husband carry out exorcisms. Flash back 20 or so years in the past. A young nun in a monastery in Romania has killed herself, for reasons unknown. The Vatican assembles a commission to study if the ground has been desecrated, or if evil has taken over the cloister. Cardinal Conroy (David Horovitch) summons Father Burke (Demián Bichir), a troubled priest he knows has experience with exorcisms and a novice from a teaching community, Sister Irene (Taissa Farmiga — Vera's younger sister). The cardinal knew her as a child who had experienced eerie religious visions of a nun. Believing these are the best persons to investigate, he sends them to the remote monastery in post-war Romania.

The two arrive at the local village and meet Frenchie (Jonas Bloquet), a Canadian who has stayed in the village to help out the people. He also delivers supplies to the monastery, leaving them in the cave beneath that also contains a large freezer — and a portal to the convent above. He has something disturbing to show them.

Burke and Irene (who arrives in street clothes and changes into her full habit at just the right moment) are greeted by a nun and shown to rooms where they will sleep. It doesn't take long for the two to begin following noises, Burke with a flashlight and Irene with a lantern.

They soon come to a door, "a portal" marked "Finit hic, Deo" (God ends here). Of course, they must go beyond to discover what made the nun kill herself. But when they are lost, they realize the message on the statue of the Virgin means something: "Mary will show you the way." They are pointed to a very holy relic (that if I describe will reveal too much of the narrative) that will redeem them.

Of course, the two, and eventually Frenchie, encounter the nun who is possessed by the devil, along with others that I will leave to your imagination to figure out. Chases, escapes and even a live burial ensue — plenty to keep you scared of walking the dark, cold stone floors and narrow passageways of an ancient and remote mountain top castle in Romania in the middle of the night.

To the writers' credit, there are plenty of crucifixes (that spin mysteriously) and rosaries and even a passing mention of the Eucharist — though there is no sign that anyone understands what the Body of Christ means in the face of real diabolic possession (where a demon[s] takes possession of a person without their permission), obsession (demon-inspired irrational thoughts such as suicidal ideation), oppression (external torments) or infestation (that can affect dwellings, things and animals).

Exorcism of demons in the film is shown through frequent invocation of the Father, Son and Holy Spirit, and Fr. Burke using a cross to cast out the devil — but he has a very difficult challenge in front of him.

If you are a Catholic who is reasonably knowledgeable of the faith, but you like horror films, you can appreciate that the devil does enter through "portals" that human beings open to him. In a film, the only way you can show a portal is visually, though here it is difficult to understand the spiritual malady that created it in the first place as a way to invite the devil into the monastery. The solution is also one that no Catholic exorcist would ever use, but then you couldn't have a film franchise.

Some of the spiritual portals in our time are pornography, astrology, tarot cards, use of horoscopes and playing with Ouija boards. One needs to remember that the church investigates cases of alleged possession carefully, including the mental health of persons before performing an exorcism. (If you are interested in more information on the Church and exorcism, read The Rite: the Making of a Modern Exorcist by Matt Baglio.)

At the press day, I asked the director and two key actors what they did to prepare for the film, if they did research or had a consultant. Bichir said that he learned much about Catholicism from his grandmother, so he was familiar with the ethos in which he was working. He was also very impressed with John Paul II's visit to Mexico when he was a child. However, for his character he imagined himself as a strong fighter, as one who combatted the devil and evil. For Farmiga, she admitted that she only had a day between finishing one film and departing for Romania where the film was shot over two months in 2017, so most of her research was done watching YouTube videos and "The Nun's Story" (1959) to learn how to comport herself as a nun. She fulfills her role very well, though the thin and staggered storyline must have been a challenge.

When I asked Corin Hardy if he did any research or if he just watched all the other devil movies to prepare, he admitted that he only watched the other exorcism movies — he is a true fan of the genre and was intrigued by Dauberman's script. In fact, he showed us one of several notebooks where he sketched out the characters for the film demonstrating his notable artistic ability.

Hardy did say that a local priest did come and bless the set but this is as close to a consultant as they got. He also said he wished that screenwriter Gary Dauberman could have been there to answer my questions. 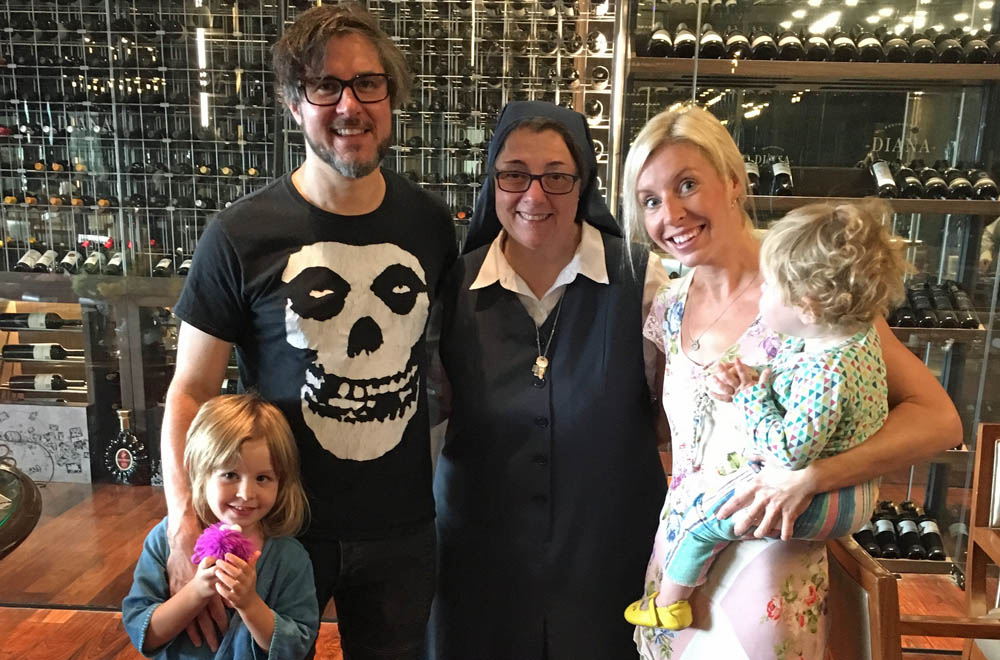 The author with director Corin Hardy, his wife and two daughters (Provided photo)

The next day at breakfast, before leaving Mexico City, Hardy brought his wife and two daughters over to my table to say hello. I had given him a rosary ring the day before that I had blessed at the Basilica of Our Lady of Guadalupe, and he reminded me that he promised to wear it on a chain (it was too small to wear). It is very hard to critique a film harshly when you meet the director, and he turns out to be a really nice man with a lovely family. Truly, I wish that Hollywood would imagine what they don't know because they don't even know what they don't know. Consultants would make for a better movie — I am convinced of it. These people watch too many movies!

A final word: "The Nun" is not intended to be a vocation movie, in case you were wondering (not). I suppose you could say it makes Catholic nuns look trite and clichéd if you think horror is not a valid genre — I happen to think it is a valid form of artistic expression. Isolation, darkness, fear and unknowing are some of the key tropes of horror movies. Catholic images and teaching, along with characters in red vestments, white habits and collars, and sacramentals such as crucifixes and rosaries are ideal for cinema, because it is a visual medium. The image of a nun is iconic and turning the cultural fear of nuns (though there are no rulers in this film) into figures and icons of horror was going to happen eventually. "The Nun" does it very effectively; the production quality is top-notch. I am sorry they revert to suicide as a plot device; suicide is so prevalent today in real life and it, like anything else, can feed someone's fragility.

Because this a horror film about the devil, well, I took a bottle of holy water with me to the screening at the ancient monastery. Several other journalists laughed but were happy to be sprinkled with it just the same. I'm not sure filmmakers get what they are really dealing with. But if people come away believing the devil is real, well then, that's a good thing.