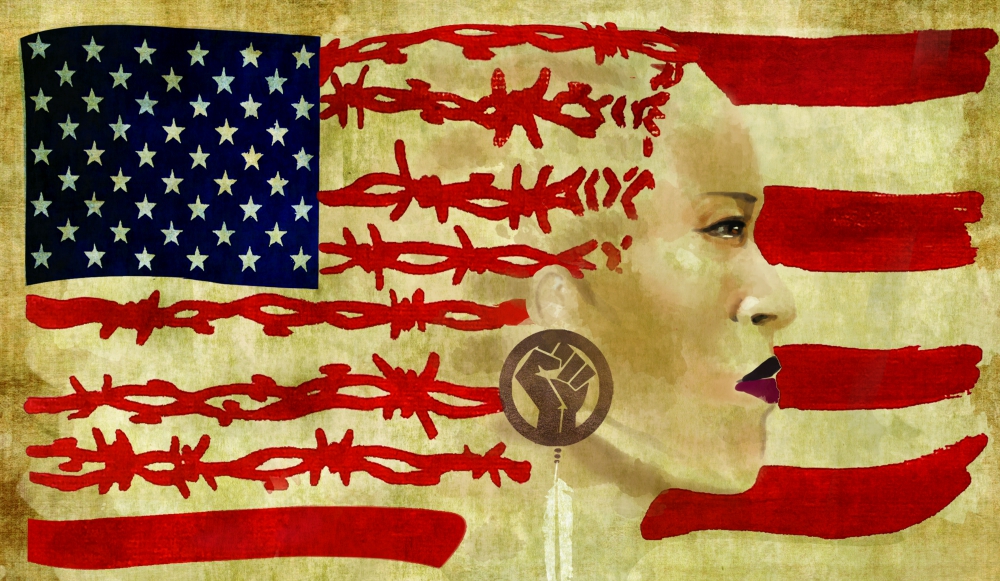 When Liza Jessie Peterson tried to get her play "The Peculiar Patriot" produced in 2003, she was met with rejection from every off-off-Broadway theater she approached. No one would touch it. Her frustration became so great it eventually landed her in jail, where she found a captive audience.

She remained in the criminal justice system until last October. After 14 years, her play is now premiering at Harlem's National Black Theatre. 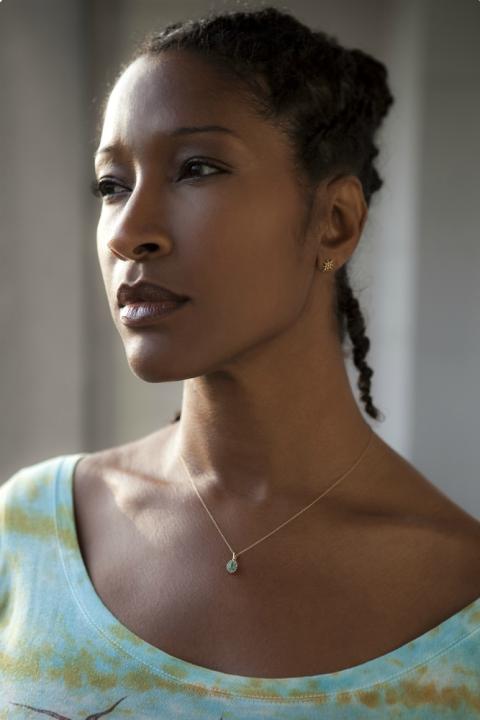 Peterson wasn't an inmate during that time. She was an actress and poet working, as she had since 1998, as a teacher and counselor at Rikers Island, New York City's largest jail, which is ranked one of the 10 worst in the country according to a 2013 report by Mother Jones. From those experiences, she shaped her one-woman, 90-minute play, which is being co-produced by Hi-ARTS (formerly known as the Hip-Hop Theater Festival). It runs through Oct. 1.

"No one back then was talking about prisons the way they are now," Peterson said. "It wasn't a subject that interested people. It might have been a little too edgy. The term mass incarceration was not in the language."

So when the New York theater community wouldn't receive her, she knew one that would.

"That was the reason why I took it on the prison tour," she said. "I took the script and took it to audiences that appreciated it. They received me and I am grateful. They saw me and I saw them."

The play is set in the waiting room of an upstate New York prison where Betsy is visiting her best friend, Joann, filling her in on the neighborhood gossip and launching into scathing indictments, laced with humor, against racism in the criminal justice system.

Peterson, who is in her 40s, talked about her work in the quiet black box theater at Hi-ARTS, which is one of many arts groups sharing space in a creatively converted former public school in East Harlem. Wearing a black "I am the temple" T-shirt, black jeans, large gold hoop earrings with an additional longer feathered one in her right ear, several rings of varying sizes and with her brown hair piled on her head, Peterson is a commanding figure at just over 6 feet tall. Even at the end of the third day of "intense" rehearsals with director Talvin Wilks, she is eloquent and passionate about her subject, which she calls slavery revisited.

"Our country is rooted in the system of slavery," she said. "The 13th Amendment declares slavery is illegal except for the punishment of a crime. Prisoners are allowed to be slaves. They're not protected by the abolition of slavery."

The play's title comes from a "sanitized" term used during the time of slavery, "the peculiar institution." Peterson, who calls herself an artivist, said mass incarceration is peculiar, and anyone who supports the war against racism and poverty is a patriot.

Among her acting roles, Peterson appeared in the Oscar-nominated documentary "The 13th." And she was a consultant to Bill Moyers for his documentary "Rikers: An American Jail." It was at Rikers, a seven-jail complex in the East River, that Peterson began touring her play, eventually appearing in 33 facilities around the country.

Over time, the zeitgeist changed, she said, citing especially the 2012 publication of Michelle Alexander's The New Jim Crow: Mass Incarceration in the Age of Colorblindness, which "opened up the narrative."

Peterson's play has changed structurally over the years with the help of performance residencies and a dramaturg. She's added current information and multimedia features to make it more theatrical.

"I believe everything happens for a reason," Peterson said. "When I first wrote it, society wasn't ready to receive it. I wanted to do it in a theater but I disappeared into the rabbit hole of prison. It was divine timing. I didn't plan or orchestrate it. All the frustration and creation lined things up for now. I couldn't have planned any better. It was nothing short of orchestrated by God." 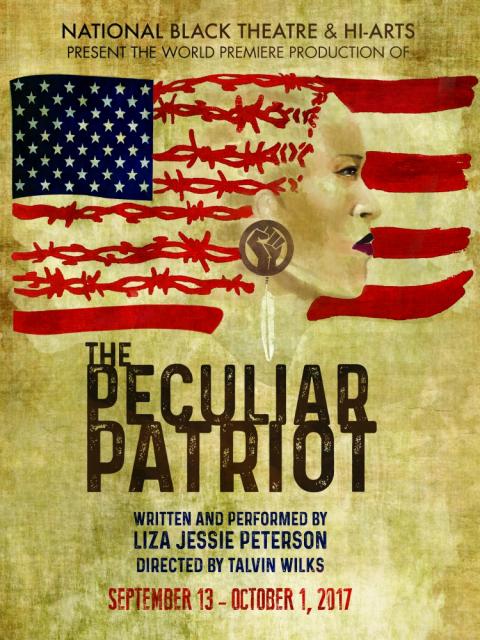 The format she chose, one character, worked well through all of that touring and will do so again now that she has signed with a touring agent. She used a black woman "because our voices are rarely heard."

Betsy, whose real name is LaQuanda, makes her voice heard during the play. She was given her nickname years before in juvie by a counselor because her last name is Ross and she was making a quilt. Just get her going on the racism of the system, especially the profit motivation.

"Soon as you hear the handcuffs go ka-klink, you hear the cash register go cha-ching," she says. "We straight cash money crops."

And the beneficiaries, Betsy explains, are the rural white towns where prisons are built, bringing jobs in construction and eventually at the facility, not to mention the spinoff enrichment of the manufacturers of jumpsuits and other prison wares, the commissary, the phone company, diners, rest stops, strip malls and the bus companies that transport loved ones.

"The whole community gets a facelift," Betsy says. "Yes, crime does pay, for certain people and certain communities."

Peterson said the privatization of prisons creates the financial drive and motivation for profit.

"There's a financial reward for increasing the number of people behind bars," she said. "Are they being incarcerated for crimes or to maintain profit margins? It's slavery created for profit. It's the same dynamic with the racial disparity, with those predominantly black and brown working literally on plantations for corporations.

"It's white supremacy, about an economic and socioeconomic system created to maintain the power of a specific group through the exploitation of another group. It's about looking at dismantling white supremacy if you really want to get at the root of it."

Prisons are built largely in white rural areas because they bring salaries, benefits and pensions to places that have lost industries, Peterson said.

"Why wouldn't they want a job there, but why is prison the only solution? We need to reimagine a society that doesn't need to rely on prisons for economic sustenance. If we're one of the wealthiest nations in the world, why do rural white communities have only prisons to rely on to feed their families?"

Peterson said black and brown youths are much more likely to be incarcerated for minor crimes like selling firecrackers or fighting in school than are white youths.

"The numbers tell it. I've worked there 18 years and I could count on one hand the number of white kids and have fingers left over."

From her work with adolescents at Rikers, and from her experience being in a relationship with someone who was incarcerated, she knows the toll it takes on everyone. For those on the outside, it could mean up to five hours travel one way for a couple hours of visiting with a loved one they often can't even touch.

"It's a financial, emotional and psychological strain," she said. "That person is not there. You can't pick up the phone and call them. Everything is regulated and monitored. It takes a toll on the spirit. You're worried when you leave, but there's nothing you can do. You can't pop up and visit when you want."

Peterson left Rikers in October to promote her first book, All Day: A Year of Love and Survival Teaching Incarcerated Kids at Rikers Island, New York's Most Notorious Jail. She said it was difficult to turn off what she heard and experienced there.

"As a human being and an artist, I'm wired to be compassionate," she said. "It's hard to witness suffering and hear people's traumas and not carry that with you. The multiple stories from multiple children created a floodgate."

And she carries with her the reactions her play drew during talkbacks from those at Rikers and other prisons where she performed.

"They always asked me, they implored me, to take it to the outside world so they will know we're here. I thought it was so powerful and touching. They wanted to make sure people get the message outside so they won't remain forgotten, to make their voice visible and heard, to put a human face on a statistic."