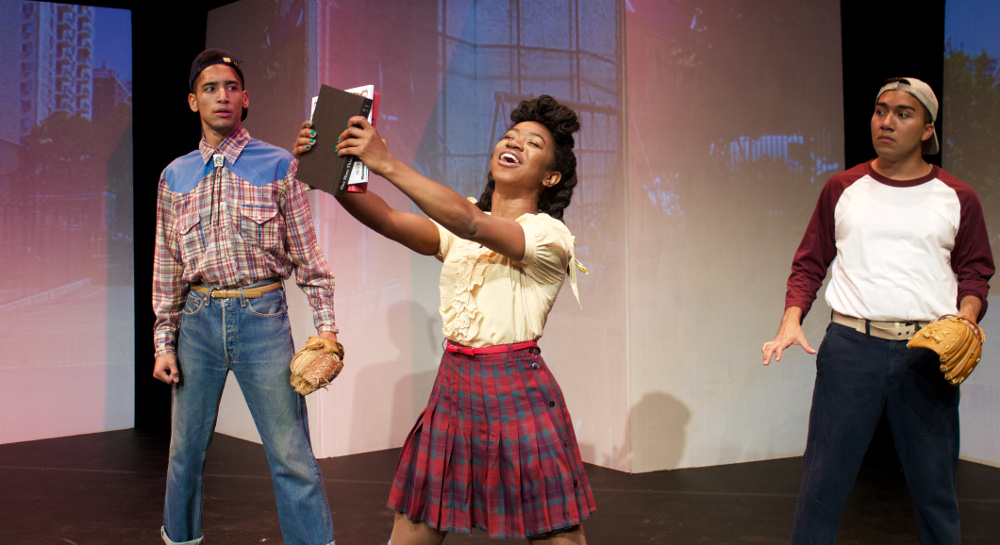 A production of "Pedro Pan" during the 2015 New York International Fringe Festival with Joey Lozada as Roger, Destinee Rea as Wendy and Luis E. Mora as Pedro (Stephen A. Elkins)

As a child, Rebecca Aparicio was fascinated by one particular piece of her mother's jewelry: gold stud earrings that were uneven, not perfectly round, and represented the story of a life being broken apart and remade.

Those small objects symbolized a traumatic event in her family's history. What Aparicio didn't know is how much her family's plight was connected to that of thousands of other families. It wasn't until 2013 when searching for a topic for a children's musical she had been commissioned to write that Aparicio began to see the larger picture.

Now she is bringing together the personal and the historical in "Pedro Pan," a musical about immigration and family that will be presented in this summer's New York Musical Festival. She wrote the show's book, and her husband, Stephen Anthony Elkins, wrote the music and lyrics.

"Regardless of one's immigration status, these are human stories," Aparicio said. "The show has taken on a shape we couldn't have imagined."

The couple, who recently celebrated their 10th wedding anniversary, talked about their upcoming production in a 42nd Street deli, a block from the Acorn Theatre where "Pedro Pan" will have its five-show run July 10-14. The musical tells the story of one fictional Cuban boy, Pedro, and how he becomes Peter in America, using the historical backdrop of Operación Pedro Pan, one of the world's largest political exoduses of children. Between 1960 and 62, more than 14,000 children were sent from Cuba unaccompanied by parents who feared for their futures under the new government of Fidel Castro. 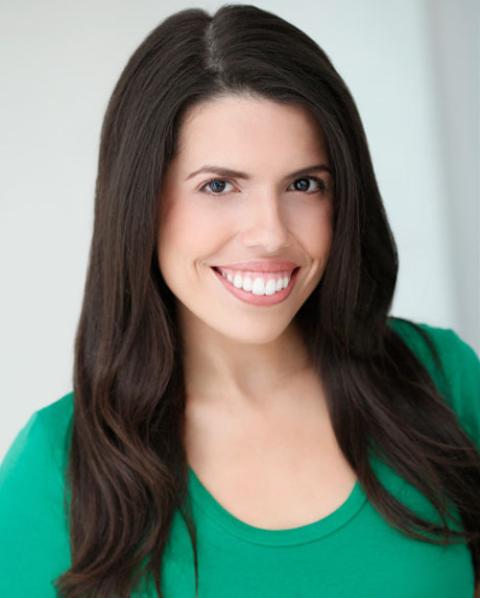 A Cuban-American who was born in Miami, Aparicio had never heard of Operación Pedro Pan until she was commissioned to write a Hispanic-themed children's musical and was told to incorporate her Cuban culture and fairy tales. In her research she found many of the fairy tales not to her liking.

"There were a lot about cockroaches," she said. "That's not what I'm interested in."

When she discovered the historical immigration story, she knew she had found her plot line.

"I understood that because it was my parents' story."

While her parents weren't part of Operación Pedro Pan, both had to leave Cuba when they were 8 or 9 — during that time and for the same reasons — with one parent left behind. An uncle came by himself in 1965. None knew if the families would ever be reunited.

Aparicio grew up hearing their stories, such as the one about the earrings, which had been a gold chain her mother received from her grandmother when she was born. Because nothing of value could be taken out of Cuba, Aparicio's grandmother had the beloved 24K gold chain melted into earrings so that a treasure from Cuba might be taken to the new life.

"The story of my mom getting on a plane and how she'd had these earrings made for her so that she could take it with her and being scared that the guards would notice their value and take them away, these were our bedtime stories," Aparicio said. "Her earrings were just one of the many tiny connections we had to the birthplace of my parents that we could not visit." 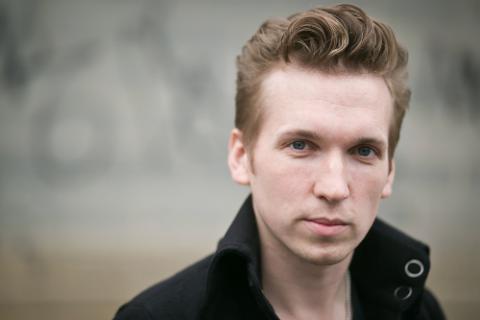 When she discovered Operación Pedro Pan, Aparicio could incorporate that movement and her parents' experience into the larger theme of immigrant children.

Over the five years Aparicio and Elkins have been developing "Pedro Pan," it has evolved from a short children's musical to a full-length show for a general audience. The core has centered around Pedro's experience of being put on a plane by himself so he could live with an aunt in Brooklyn. Among the adjustments they have made is deepening the role of the adult characters, especially creating a more difficult adjustment for Pedro and his aunt, a single woman suddenly charged with caring for a child for an undetermined time period.

"It resonated with adults because of the subject," Elkins said. "We realized there was a lot more of the story asking to be told."

The Pedro Pan movement was new to Elkins, as was all of Cuban culture when he met Aparicio in 2004 at Alabama's University of Montevallo and they started working on musicals together.

But over the years they have been together he "fell in love with the music." He started learning it informally with the help of more than two dozen CDs Aparicio's father gave him.

"When this project came around, I used this influence I had been studying for the last 10 years or so," he said, explaining that the music he wrote for the show is a mix of classic musical theater with Cuban music from the Pedro Pan era, drawing from traditional Cuban music like the bolero and the son, which feature the acoustic sounds of piano, percussion, trumpet and bass.

Although Catholicism is not central to the musical, it was a major force behind Operación Pedro Pan. With Catholic schools shut down in Cuba and priests and nuns being expelled, the church became a major player behind the movement to get the children out. Under the guardianship of the Miami Diocese, Msgr. Bryan Walsh, who ran the Catholic Welfare Bureau, arranged visas and helped find homes for the children around the country and in church-run camps in Southern Florida.

Aparicio grew up Catholic, and the couple was married in that tradition. They now worship at Christ Church Bay Ridge, an Episcopal parish in Brooklyn where Elkins is the music director.

"Pedro Pan" received a New York Musical Festival reading last summer, and the couple has been helped by the feedback they received. They also were honored with a New York Musical Festival Reading Series Award, guaranteeing them a slot in this year's full-production lineup, along with a $5,000 subsidy. From the show's initial production at the New York International Fringe Festival in 2015, it has touched people emotionally. The political theme has struck audiences more as well.

"The message has gotten more and more important," Aparicio said. "There wasn't the animosity toward immigrants as there is now. It's grown and grown and is getting scarier. For children who are immigrants, this is a difficult time." 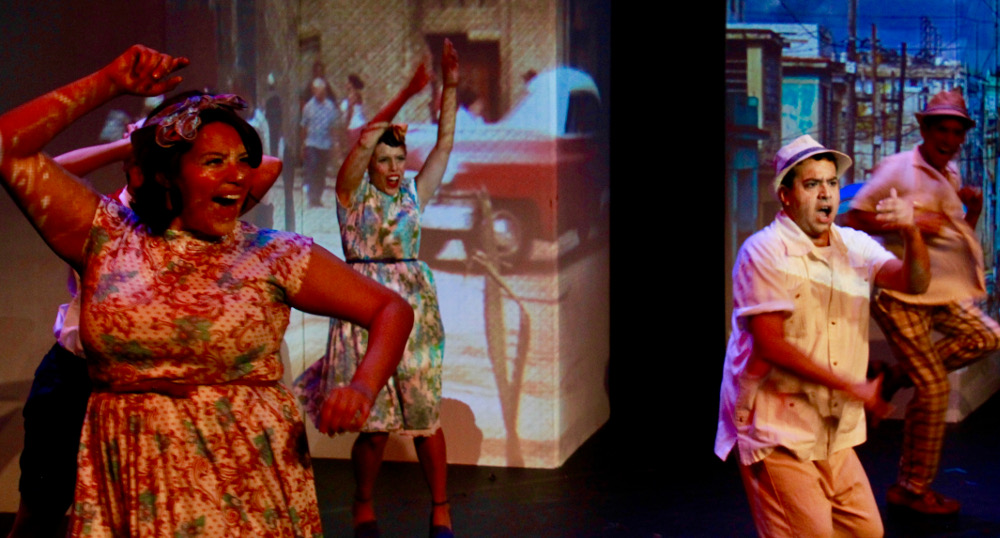 But the writers' intent is not to push a cause.

Aparicio longs to go to Cuba to see where her parents lived and went to school. Her grandparents have described that world to her "street by street" over the years. But she is making no plans.

A version of this story appeared in the June 15-28, 2018 print issue under the headline: An immigration story whose time has come.