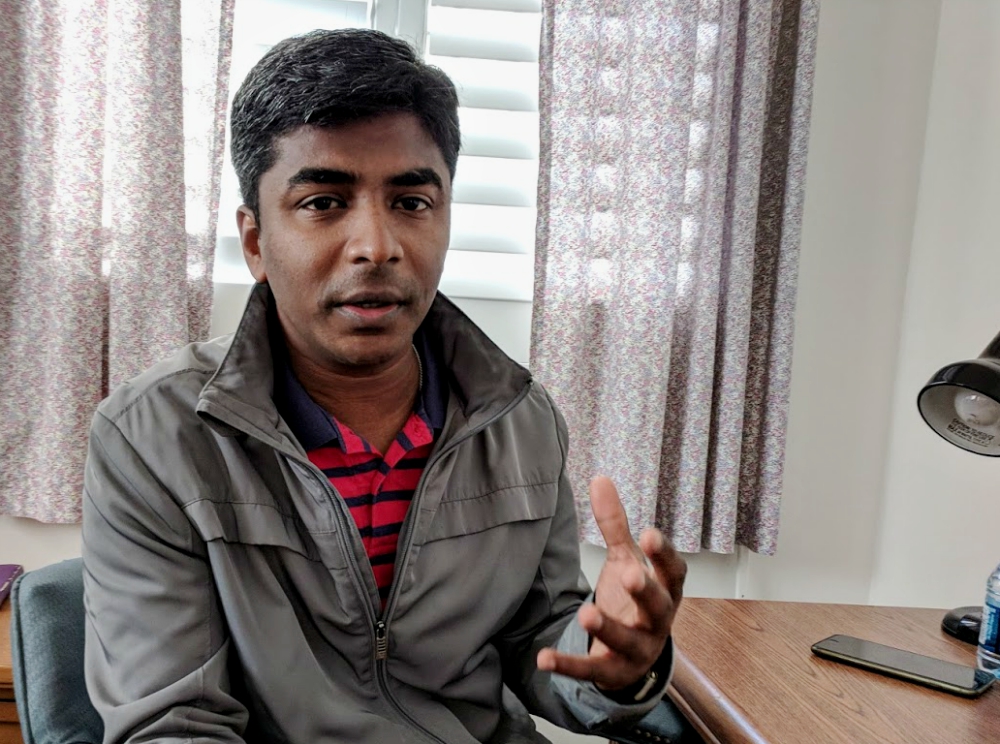 An earnest lawyer asks Jesus in the Gospel of Luke: "Who is my neighbor?" Jesus responds by telling the story of a Samaritan who went out of his way to help a person in need.

In his new documentary, "Who Is My Neighbor?", Redemptorist Fr. Charles Vijay Kumar of Bangalore, India, asks the same question, responding that our neighbors today are refugees and migrants.

A brief preview of the new film was screened at the symposium "The World on the Move: Migration and Immigration in Uncertain Times," held Jan. 23-25 and sponsored the CSJ Center for Reconciliation and Justice at Loyola Marymount University in Los Angeles.

Kumar came to the United States in 2014 to study film and television at Loyola Marymount. His first documentary film was "Trafficked in the U.S.," which told the story of two human-trafficking survivors and their journey to a new life.

The new film, which tells stories of migrants in the U.S. and around the world, is to be completed in October. Initially, he planned to work on a short film on migration and a Christian response, but decided to film a longer documentary covering the issue.

Kumar believes that his position as a filmmaker who studied at Loyola Marymount and is a member of an international religious congregation that serves the poor and most abandoned gives him a unique voice.

"I approach the issue as a novice, open to listen and learn, in many ways like the audience to whom I want to tell this story, thus giving me a unique perspective to shape this story," he said.

When the film is done, he plans to submit it to film festivals and launch it in private screenings.

NCR interviewed Kumar at the January symposium. His responses have been edited for length and clarity.

NCR: Where did you film this documentary?

Kumar: We began filming primarily in the United States. I wanted to see the Christian response to the crisis, so I interviewed church leaders, priests and other Redemptorists working in the migrant community.

We started in New Jersey with Redemptorist Cardinal Joseph Tobin of Newark. I went around with him to see the work of the archdiocese for the migrant communities. In many ways, it spills over toward the church in America's thinking about these issues of migrants and refugees.

From there, I went to our Redemptorist parish in the Bronx [New York], where we have a center for migration working in collaboration with a nonprofit organization. We interviewed four or five immigrants who have received help from the center. They have a difficult life. One of them was a 19-year-old young man who just arrived to New York a week before. He talked about his treacherous journey across the desert in Arizona.

We then went to Mississippi. The primary story that I have been following extensively is of an immigrant family with five U.S.-born children helped by Redemptorist Fr. Mike McAndrew in Greenwood, Mississippi. It is a story of an undocumented migrant father who has been in detention for more than 18 months fighting deportation. The five kids were affected by the absence of the father. We filmed the story as the case unfolded.

We also filmed in different continents. For Latin America, I chose Brazil. We filmed in São Paulo with the help of the Scalabrinians, who have a big mission for the immigrants with housing, legal, educational and other assistance.

For Asia, I chose the Philippines, as it is a country that sends out people. It was a unique story of migration, as the migrant worker reality is so institutionalized by the country. We filmed in Manila and a rural area in Batangas.

For Europe, we went first to Southern Italy, a place called Marina Schiavonea, where the Redemptorists have a parish. Here is a story of refugees and their families who fled their countries in Africa and Eastern Europe. They were saved by the coast guards of Italy.

The tragedy over there is that people are given documents with a refugee status to enter Italy, but no assistance is available for them. It is the Catholic or Christian community that is helping out — Caritas or individual parishes are pooling resources and trying to feed these people. They are living in such a deplorable condition.

We also filmed in Venice. There we filmed the work of Redemptorist Father Luigi, who is a chaplain to the Filipino community. He helps the migrants with various needs, like filing tax papers, or helping them find housing.

We also filmed in Rome. I interviewed our superior general, Fr. Michael Brehl, to see the perspective of the Redemptorists worldwide. We also filmed a story about a church that is turned into a tent house for homeless people. It is fascinating to be homeless in the heart of Rome.

I had a crew that filmed a Filipino migrant in Moscow. Moscow has a lot of internal migration, but also migrants from other countries. Completing the European segment, I filmed an Eastern-rite bishop of the Ukrainian diaspora in Paris who shared his take on migrants and refugees.

We also filmed in South Africa and along the border of Mozambique. So often, the world knows about migration from Africa to Europe. There is a large number of immigrants that go south. South Africa's border is known as the bloodiest border, I am told.

How do you think this documentary will do in the U.S.?

The primary purpose of the film is to address the present immigration issue in the U.S. and across Europe. With the current political situation and debate, there is so much confusion among the people of goodwill.

That's my target audience — people of goodwill, whichever side they are. There is a message for them in this film. We are trying to put faces of migrants to those numbers. When we hear that according to the U.N. statistics in 2015, there were 244 million migrants worldwide, that number is difficult to imagine. In addition, I'm trying to show people that this is not an American story; this is a global story.

The purpose of the film is to show a Christian response. As a Catholic missionary, my faith is telling me that the church has a role to play in the world. In history, the church always stands up for Gospel values. I want to take that route in this film.

What do you think this movie can do to for people in the pews?

I want to put forward concrete stories of migrants. Let them see these people's stories and ask them what our faith is calling us to do.

What have you learned from this experience so far?

This has changed me in such a big way. As a filmmaker who is trying to tell a global story, there is a tendency to talk of generalities and concepts. When I sit and talk to a person, it is an encounter. I understand his or her struggle. That helps me to be in touch with my humanity.

A version of this story appeared in the Aug 24-Sept 6, 2018 print issue under the headline: Redemptorist filmmaker focuses on our 'Neighbor'.