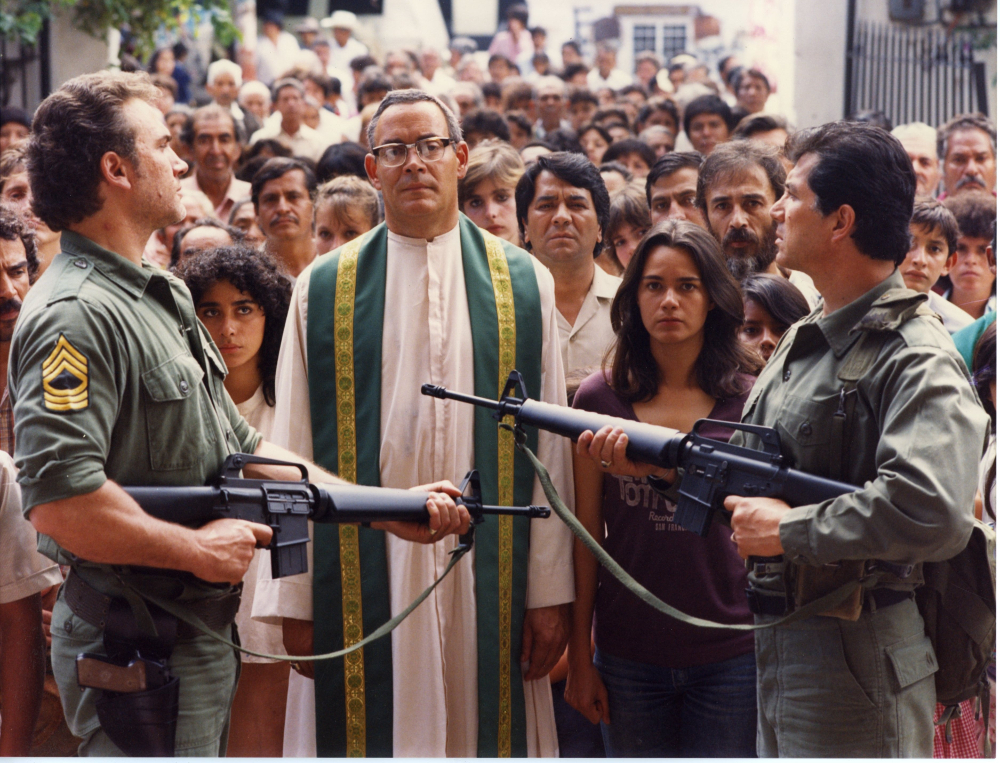 The year, 1977, the circumstantial background, the turbulent presidential election in El Salvador. With his hands, the 60-year-old bishop cups water from a basin and washes his face. That day, in the capital San Salvador, he passively witnessed how armed military men terrorized a busload of voters from the city's poor sector as they made their way to the polling station. Just earlier, he had tried to caution his Jesuit friend Rutillo Grande, pastor and social activist, about "going too far." As he splashes water on his face a couple more times, he is stopped midstream by a colleague bearing the news: "You have been appointed archbishop."

In the biopic "Romero" (John Duigan, 1989), the inaugural Mass of newly appointed archbishop of San Salvador Óscar Arnulfo Romero, gives us an unambiguous picture of his centrist theological and sociopolitical perspective; he is the "safe choice." Conservative members of the church hierarchy, and prominent figures of the oligarchy dominate his bevy of well-wishers. "I come from a world of books," he declares from the pulpit. "We in the church must keep to the center watchfully, in the traditional way, but seeking justice."

But as the story arc unfolds, Romero, in a state of inertia, is drawn into a gradual conversion experience, not just in a general sense, but in the specific trajectory of a "conversion to justice." It is by the portrayal of such a conversion that the film offers insight to Romero's deepening spirituality that would lead him to a prophetic, liberating solidarity.

I find Jesuit activist Peter McVerry's description of the three-stage process that leads to a conversion to justice an illuminating lens through which we can understand Romero's transformation in the film.

The first stage, a "conversion of the feet," is that latent doubt and discomfort when, after some form of sharing in the experience of the poor, we realize that our incapacity to love our marginalized brothers and sisters has a lot to do with our over-attachment to the comfortable lives we live. We become open to this realization not from paper cuts we get on our fingers from reading, but from the mud we get on our feet from immersion.

Early in the film, Romero faces new encounters at the edge of society where poor Salvadorans are hard-pressed on every side. This brings about a real "dis-ease" in him, especially as he continues hobnobbing with San Salvador's rich and powerful. The camera works well to capture nuances and close-up shots of Raul Julia, the gifted actor who plays Romero, revealing subtle emotional hints; his face is a threshold of a simmering crisis of belief.

A "conversion of the head" is that juncture when we are "called to social analysis." We come to a realization that there are structural causes for poverty and suffering, and for as long as our values and assumptions remain unexamined, we are complicit in this social injustice.

Again, the film is replete with sequences that lead Romero to a more clear-eyed social analysis. In one scene, panning shots display a collage of disturbing, real-life photographs of the victims of military atrocities as the archbishop listens to the stories of the bereaved families. This layer of realism works to convey that the scales have fallen from Romero's eyes; he now sees the "view from below," the barefaced reality of the ongoing human tragedy and its structural causes. Inevitably, he begins to distance himself from members of society's elite he once called friends.

Finally, a "conversion of the heart" involves an actual, committed response after having journeyed through the two previous conversions. Catholic social teaching and theologies of liberation refer to this turning point as an "option for the poor."

The film brings this to deeper focus in the "barracks" scene when Romero heroically attempts to re-enter the church in Aguilares that the military had occupied and desecrated. Twice, he was threatened with gunfire and literally kicked out the church building. Just as all hope seemed lost, Romero — now garbed in priestly vestments — attempts to return a third time. But he is no longer entering the church alone; the faithful had gathered around him, and in procession, they enter the building as the church. In his homily, the archbishop's message resonates with the very heart of the reign of God: "You are the church, you are the people of God. You are Jesus in the here and now."

The year, 2017, the circumstantial background, the rising xenophobia and racism in the United States. Or the refugee crisis in Italy and the Mediterranean. Or the violent drug war in the Philippines.

It also happens to be the centennial of Blessed Óscar Romero's birth.

Purposefully, "Romero" is the film for us to revisit at such a time as this.

[Precious Blood Br. Antonio D. Sison is associate professor of systematic theology at Catholic Theological Union, Chicago, and author of the book The Sacred Foodways of Film. "Romero" is available on DVD and video streaming from PaulistProductions.org.]