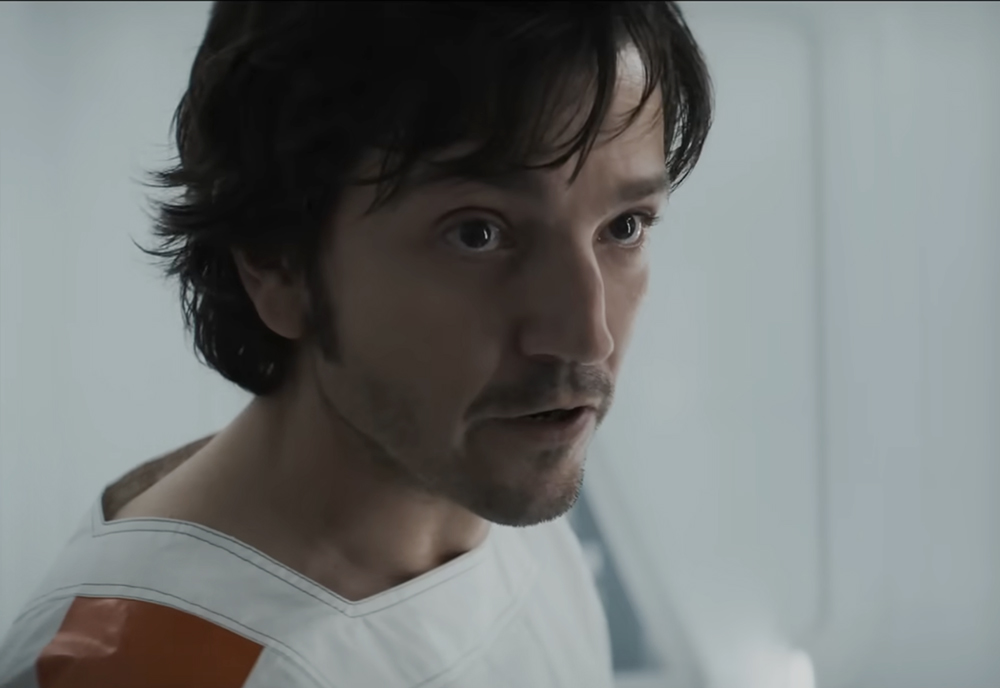 My husband is the "Star Wars" aficionado (nicer word than dork, as in "the dork side") in the family: Since the first "Star Wars" movie release in 1977, seeing those movies once is enough for me. The Walt Disney Company, having bought the rights to the "Star Wars" franchise, has been making spinoff miniseries as fast as they can, and my husband has an app for that. I watch with him sometimes, but he has to remind me where the newly imagined characters fit into the overall "Star Wars" timeline.

The latest Disney series, "Andor," is about a freedom fighter who predates the first "Star Wars" movie, which is actually the fourth main "Star Wars" movie chronologically. Cassian Andor appears in the movie "Rogue One," which came out in 2016, but the same actor, Diego Luna, is now playing his younger self in "Andor." Got all that?

If not, no worries. The thing that struck me about "Andor," now that I have watched all 12 episodes, is Andor's time in prison. Convicted on trumped-up charges, Andor is sentenced to six years hard labor in a facility that mass produces a cumbersome, unidentifiable part of something mechanical: The human cogs are making cogs.

The inmates must work in teams. If their daily output isn't satisfactory to the prison authorities, the whole team suffers searing physical punishment. The prison itself is surrounded by water, reminiscent of Alcatraz, so that escape seems impossible. The facility floors are wired to shock the daylights out of any perpetually barefoot inmate stepping out of line.

Prisoners are seen in the Disney+ series "Andor." (Courtesy of Disney+)

My caution radar went off when Andor first arrives at the prison. Having worked in a prison for many years, I make it a policy not to watch movies or TV shows about prison, because I find the depiction either too brutal to watch, or too erroneous to bear, or both. It's sort of like watching a movie or TV version of a Catholic Mass and realizing the writers did no research: The standing and sitting are all wrong, or the parts are out of order. The smallest mistakes take your mind out of the story.

But to my surprise, even though "Andor" is set in a galaxy far, far away, the writers have nailed the prison experience.

For starters, nothing sensational happens with the preexisting prisoners the moment Andor arrives, no gang fights or riots or rapes. What Andor quickly experiences, along with his fellow inmates, is the boredom of prison. Everything is the same every day, the work, the food, the clothing, the schedule, the monotony.

Then there is the deprivation. Inmates are given exactly enough to survive and do the work, but no more. There is the sense of anonymity, that one's humanity now matters nothing more than a number in the system.

There is the soul-crushing but casual cruelty on the part of the guards, cruelty for the sake of cruelty, the manifestation of power corrupting those who wield even a bit of it. But there is also the way the stronger or smarter or younger or more able-bodied inmates help the faltering prisoners as best they can without getting in trouble themselves.

All of this background to the actual plot of "Andor" lines up with my time working with inmates in a state prison library.

A seemingly throwaway part of the prison segment in "Andor" actually broke my heart with its accuracy. The inmates grill the newly arrived Andor for news of the Empire's resentencing guidelines that have doubled their time, and he doesn't know. "The Public Order Resentencing Directive," they prod him. "The P-O-R-D!"

But what they want to know has not made the news. "This guy never heard of it," one prisoner realizes. No one on the outside cares.

The men I worked with followed new proposals and developments in the criminal justice system passionately, and were always hungry for news that the local papers and nightly broadcasts didn't really cover. No one on the outside reported regularly on the details of bills before the state legislature, AB this or SB that. The anguish in this prison in a remote part of the galaxy rings absolutely true. As did the despair and hopelessness that lead one of Andor's fellow inmates to end his life.

By not peppering the prison with the usual trademark "Star Wars" weird aliens and lovable droids, the "Andor" writers get prison right. They spark the viewer's compassion for the suffering of incarcerated humans.

The prison subplot even culminates in Episode 10 with an unexpected and breathtaking act of self-sacrifice by an older prisoner. Well done, writers.

Related: 'Star Wars: Andor' shows us hope in the darkness

Those of us who have never been in a prison, either as an inmate or a visitor or a worker, don't usually spare a thought for what goes on inside one. We don't worry about the poor conditions or unjust sentences or institutional mistreatment that inmates might endure, because we think they deserve to be there. They did something bad to go to prison in the first place, after all, so why waste time on their fate? They have earned whatever misery they get; the more deprivation, the better.

But as Dostoevsky once observed, "The degree of civilization in a society can be judged by entering its prisons." The way we care for those on the margins matters.

A version of this story appeared in the Jan 20-Feb 2, 2023 print issue under the headline: Sadly, 'Star Wars' series 'Andor' gets prison right.