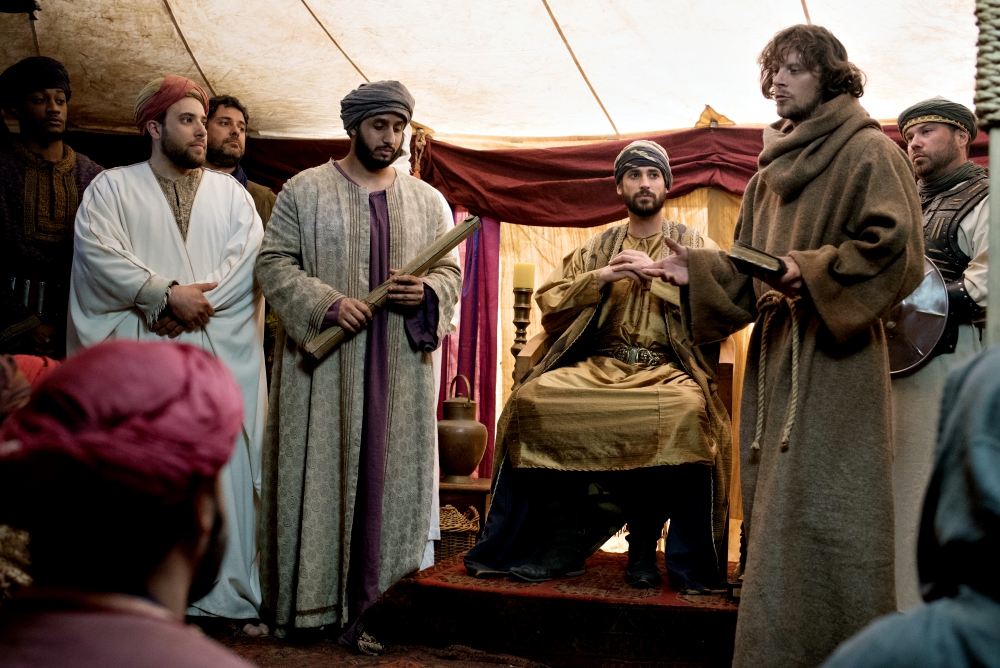 St. Francis of Assisi (Alexander McPherson) appears before the court of Egyptian Sultan Malik al-Kamil (Zack Beyer) in a scene from the documentary film "The Sultan and the Saint," which premieres on PBS Dec. 26. (UPF)

What impact can one encounter make?

While details are scarce about the meeting between St. Francis of Assisi and Sultan Malik al-Kamil of Egypt in the 13th century amid the Fifth Crusade, it has become an important symbol of interfaith dialogue and the pursuit of peace, even in the midst of great conflict.

The historic meeting of the two faith leaders will receive a fresh look Dec. 26 on PBS, at 8 p.m. Eastern, in the new docudrama "The Sultan and the Saint," which blends scholarly, documentary-style interviews with dramatic reenactments of the story and with Academy Award-winning actor Jeremy Irons as narrator.

"It just seemed like this is a story for our time," writer and director Alex Kronemer told NCR. "This idea that a simple Christian friar met with a mighty Muslim leader and together they had a relatively brief encounter that had enormous consequences."

The story of "The Sultan and the Saint" itself began 30 years ago, when Kronemer, during a trip to Assisi, Italy, encountered a Giotto fresco depicting the meeting between Francis and al-Kamil.

"It seemed incredible that such a thing had happened, and I kind of wanted to know more about it then," said the Muslim filmmaker, who developed the docudrama with Unity Productions Foundation.

"The Sultan and the Saint" offers a deeper exploration into a story that many Christians and Muslims may know of in passing, but are hazier about the details.

The meeting between Francis and al-Kamil took place in 1219, amid the Fifth Crusade, in Damietta, an important Egyptian port city on the Nile River where Christian soldiers were attempting a siege. At that point, the Crusades, the violent effort by Christians to recapture control of Jerusalem, had stretched more than 100 years.

There are few historical accounts of the encounter. In the film, Francis is depicted as seeking to end the Crusades through preaching the Gospel. While the meeting did not bring about peace, Franciscan historian Fr. Michael Cusato said in the film, the encounter represented a "faith exchange," as both men testified to God's role in their own lives and were able to "listen to the other's perspective, allowing God to be God in the lives of both of them." 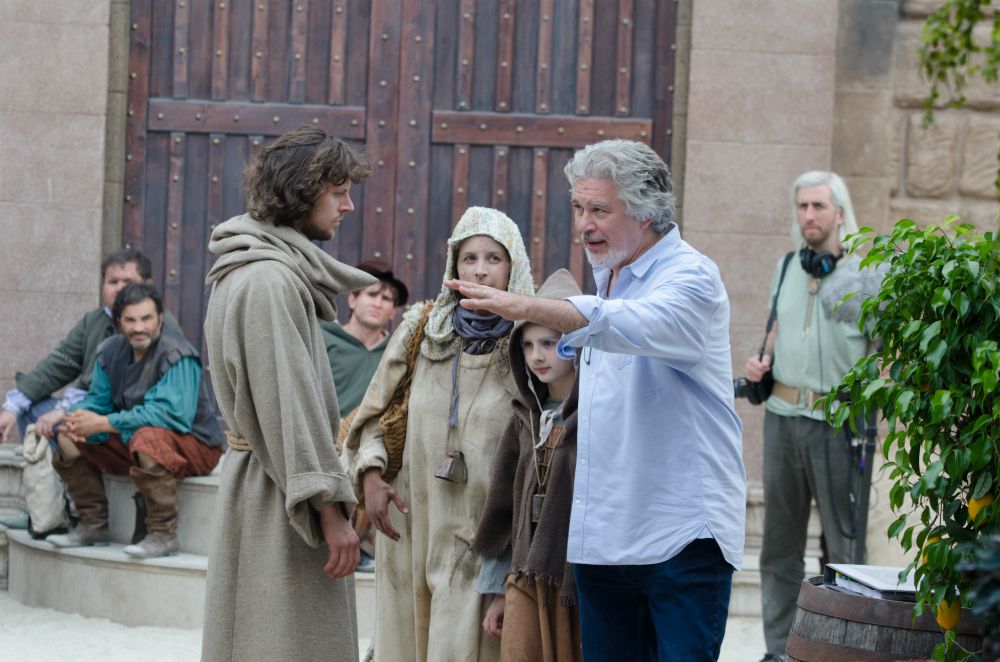 Director Alex Kronemer, right, works with Alexander McPherson, who plays St. Francis of Assisi in the documentary film "The Sultan and the Saint," which premieres on PBS Dec. 26. (UPF)

Kronemer hopes that "The Sultan and the Saint" can model anew how Christians and Muslims can meet one another in dialogue while also providing a medium to cultivate greater understanding, in a present day when heightened global tensions and angry and debasing discourse bear eerie similarity to the setting in which Francis and al-Kamil met.

At its outset, the film explores the beginnings of the Crusades from the perspectives of neuroscience and developmental psychology, where research has shown how dehumanizing rhetoric — such as using terms like infidels, pagans and nonbelievers — can break down basic human tendencies toward morality and empathy and can compel people to take up arms and fight other people.

"There was inflammatory rhetoric, dehumanizing characterizations of the other, quote unquote, that led to an enormous amount of violence and conflict. Not just between Muslims and Catholics for over 150 years, but also began some of the earliest persecution of Jews in Europe," Kronemer said.

Some of the efforts toward a rejuvenated Christian-Muslim encounter have already occurred.

Prior to the post-Christmas national premiere, a series of pre-screenings across the country brought together believers of the two largest world religions to not only watch the film but to meet one another face-to-face to learn more about their faiths and each other.

One of the nearly 80 screenings took place in Cincinnati in May, with a sold-out crowd of 450 people filling the Midwestern city's historic 20th Century Theater. Hosted by the Edward B. Bruggeman Center for Dialogue at Xavier University and the Islamic Center of Greater Cincinnati, the screening included a panel discussion afterward with speakers from the Islamic Center, Xavier and the Cincinnati Archdiocese.

Shakila Ahmad, president and board chair of the Islamic Center, said the film offers a powerful avenue for "breaking down the unknown by knowing one another" and finding real points of connection, whether it be in a shared identity as Americans or through mutual goals to seek the best opportunities for their children."

"It's an opportunity to really build relationships that are not there that are causing angst and fear and sometimes outright hatred for people that we think we hate but we don't even know them," she said. 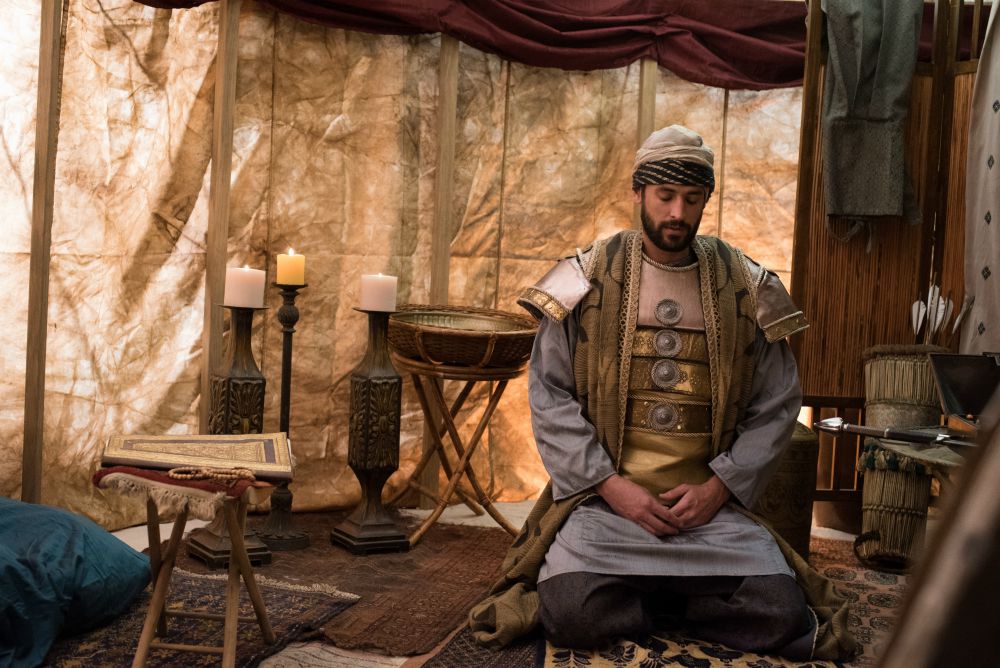 Actor Zack Beyer portrays Egyptian Sultan Malik al-Kamil in the documentary film "The Sultan and the Saint," which premieres on PBS Dec. 26. (UPF)

After the screening, the Islamic Center invited attendees to their monthly "Know Your Neighbor" event a few days later, where people could visit its mosque and other facilities. About 80 people came, many of whom had viewed the film. The center and archdiocese have since partnered in other dialogue initiatives.

A regular presence at many of the screenings throughout the country in the past year was Franciscans. The Franciscan Action Network worked closely with Unity Productions Foundation in promoting the film, and several communities of Franciscan sisters assisted with some of the documentary research.

"In this time, in this climate, in our country — in the world, actually — but in our country of rising Islamophobia, we thought it was very important for Franciscans and other Christians to learn more about true Islam and its commitment to peace," Franciscan Sr. Marie Lucey, associate director of Franciscan Action Network, told NCR.

The push to foster understanding between the faiths comes at an important time, particularly for Catholics.

A 2016 report from the Bridge Initiative at Georgetown University — titled "Danger & Dialogue: American Catholic Public Opinion and Portrayals of Islam" — found nearly half of U.S. Catholics could not name similarities between Catholicism and Islam, and just 14 percent held favorable views of Islam, with one-in-three admitting to unfavorable views.

In addition, the study found Catholic online media portrayals of Islam often place the faith within the context of violence and terrorism, with headlines skewing negative and anger the primary emotion conveyed. Roughly half of Catholics (45 percent) see Islam as encouraging violence more than other world religions.

In researching the story of Francis and the sultan, Kronemer learned that the region of North Africa where al-Kamil ruled was a diverse society where Muslims and Christians lived together. What's remarkable, he told NCR, was that it was lost, showing that even diverse societies can switch and peace can be lost.

"Getting back to what inflammatory rhetoric and dehumanizing language can do, it should make us all be very careful of how we behave and even how we speak to each other," he said. "Because there's no automatic break that can be applied that will stop things from spiraling out of control. They can spiral out of control unless we are making a conscious effort to be vigilant against that."

At the first screening of "The Sultan and the Saint" in November 2016 in Washington, D.C., with 1,400 people in attendance, Unity Productions Foundation presented Lucey with a peace award for her interfaith work.

Her Sisters of St. Francis of Philadelphia community stands as a successful example of Christian-Muslim encounter through its ongoing dialogue, now six years strong, with the Zubaida Foundation, based in Yardley, Pennsylvania.

"The relationship has developed, I would say, into a real friendship," Lucey said.

Noor Phillips, a member of the Zubaida Foundation's interfaith committee, called the friendship with the Franciscan sisters "a wonderful journey and one I wish to last for a very long time."

The gatherings, held every few months, began from a desire among the sisters to better emulate St. Francis' friendship with the sultan. Since then, the communities rotate between meeting at the Franciscan motherhouse and a mosque.

From the beginning of their conversations, no topic or question has been off the board, whether that's identifying the proper terms and titles associated with their religions, or learning the basic tenants of each faith. As the relationship grew, similarities between Christianity and Islam became apparent.

For starters, both are Abrahamic faiths that believe in one God. Going deeper, both faith traditions share the values of peace, love of neighbor, service and care for creation. Islam views Jesus as a prophet, and Muslims believe that the Virgin Mary gave birth to him. They also hold Mary in reverence, and she is referenced in the Quran.

"I believe that we all have the same God and we all were called to God in a way that we understand," Phillips said. 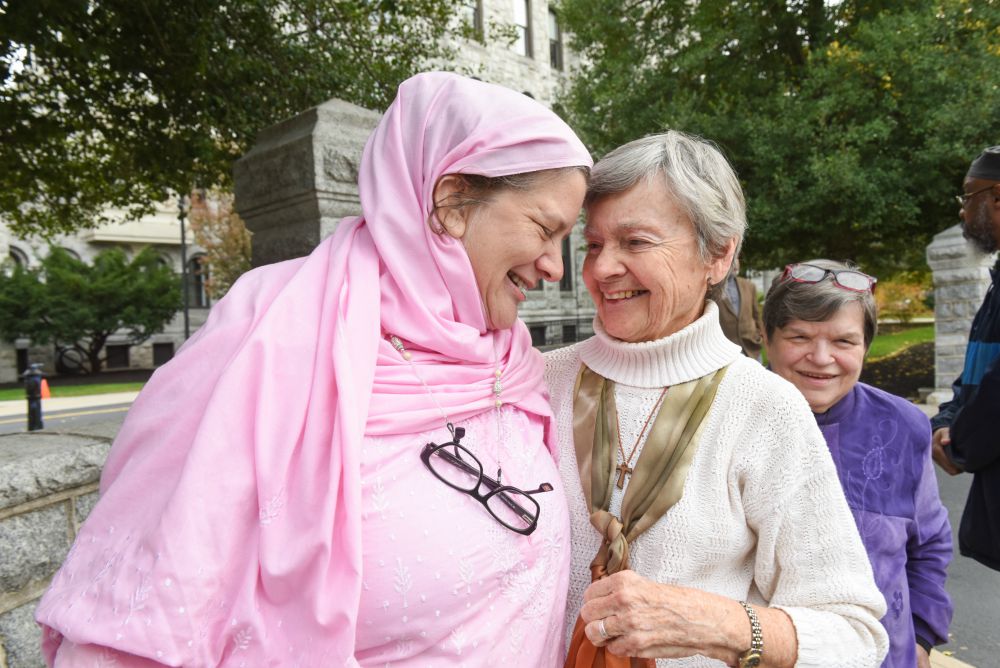 Differences are also discussed, such as those within each theology, and distinctions in leadership structures.

More than anything, the gatherings serve as a deeply spiritual time for all who take part.

"For both of us, it recharges us, because we find so much godliness in each other," Phillips said.

The Franciscans got involved in "The Sultan and the Saint" through this connection, as Phillips introduced one of the film's producers who spoke at an interfaith Eid dinner they hosted.

Lucey said connecting with the film was also a learning opportunity for the sisters, who knew well the story of Francis' visit, but less about the sultan. With the film, she's learned about his education and upbringing, as well as his desire for peace with Christians.

She described one scene where al-Kamil refused the calls from a group of Muslims to tear down a Christian church, and another where the sultan, with the Crusaders caught in a Nile floodplain, sent bread and barley to the camp rather than wiping out its army.

"It certainly broadened and deepened my understanding of this particular story and its relevance for our time," Lucey said.

She hopes that "The Sultan and the Saint" will spur more communities to develop relationships with their Muslim neighbors, whether through service projects and other interfaith actions, or simply ongoing dialogues like the Franciscan sisters have with the Zubaida Foundation.

"Muslims and Christians are the two largest religions in the world, so I think it's important for Christians and Muslims to get to know each other, and to share understanding," she said.