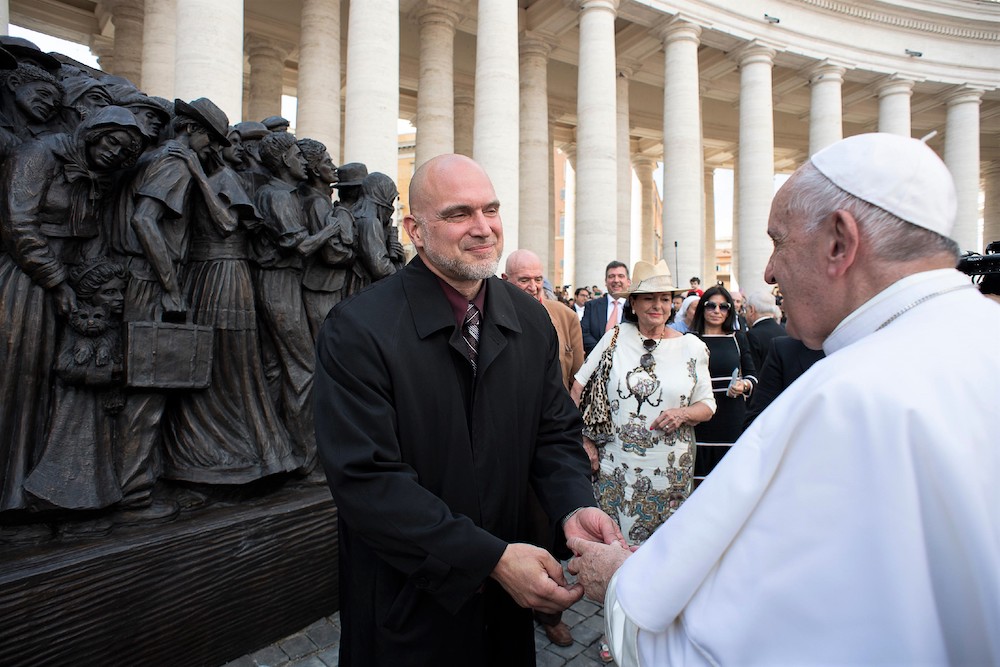 Pope Francis greets sculptor Timothy Schmalz at the unveiling of the monument to migrants and refugees, "Angels Unawares," at St. Peter's Square on World Day of Migrants and Refugees, Sept. 29, 2019. (Itravella/Wikimedia Commons)

Timothy Schmalz sees Jesus in the homeless, the hungry, the sick, the prisoners, the desperate refugees and migrants. He views himself as an evangelist who preaches worldwide, not with his mouth, but with his hands, casting the least among us from Matthew 25:31-46 into exquisite — and haunting — life-size bronze sculptures.

The 50-year-old Canadian Catholic's most famous sculpture, "Homeless Jesus," depicts a gaunt man lying on a bench covered by a thin blanket, with enough space for someone to sit at his exposed feet, which bear the nail wounds of his crucifixion.

Schmalz says he hopes that "Homeless Jesus" — now displayed outdoors in more than 100 cities worldwide — evokes in others the same epiphany he recalls when he spotted a shivering homeless man under a thin blanket on a bench in downtown Toronto at Christmastime in 2011.

"I just stared at him, and I couldn't stop thinking of Matthew 25, and then: 'That's Jesus. That's the least of my brother,' " Schmalz says. "I couldn't get that image — or those words — out of my head. I believe it was a true encounter with the divine at that moment."

In other desperate souls living on the streets of Toronto, Schmalz saw vague reflections of himself as a young sculptor.

A destitute art school dropout — he had hated what passed for contemporary art and wanted to sculpt in the tradition of master Christian artists like Michelangelo, Gian Lorenzo Bernini and Auguste Rodin — Schmalz lived four years in his early 20s in a tiny room in a mostly abandoned factory in Toronto.

He slept on a wooden board that doubled as a sculpting bench and had no kitchen, rare heating and sporadic water service in the toilet and sink down the hall. Outside ambled sex workers, people dealing illegal drugs, people who were homeless.

For the first time in his life, Tim Schmalz identified with society's castoffs.

"Living on a board made me relate to the marginalized; I was one of them for four years," Schmalz says.

During that time, he holed up for 15 hours a day, casting Jesus and Mary and saints.

"I basically lived as a cloistered monk in my studio," says Schmalz, a muscular, bearded man with a shaved head who now lives with his wife and young son and daughter in St. Jacobs, Ontario, a quiet hamlet southwest of Toronto.

Schmalz's way of hearing, seeing and sculpting the Word would propel him from a young self-taught artist living in an old factory to a well-known sculptor meeting Pope John Paul II and later Pope Francis at the Vatican. 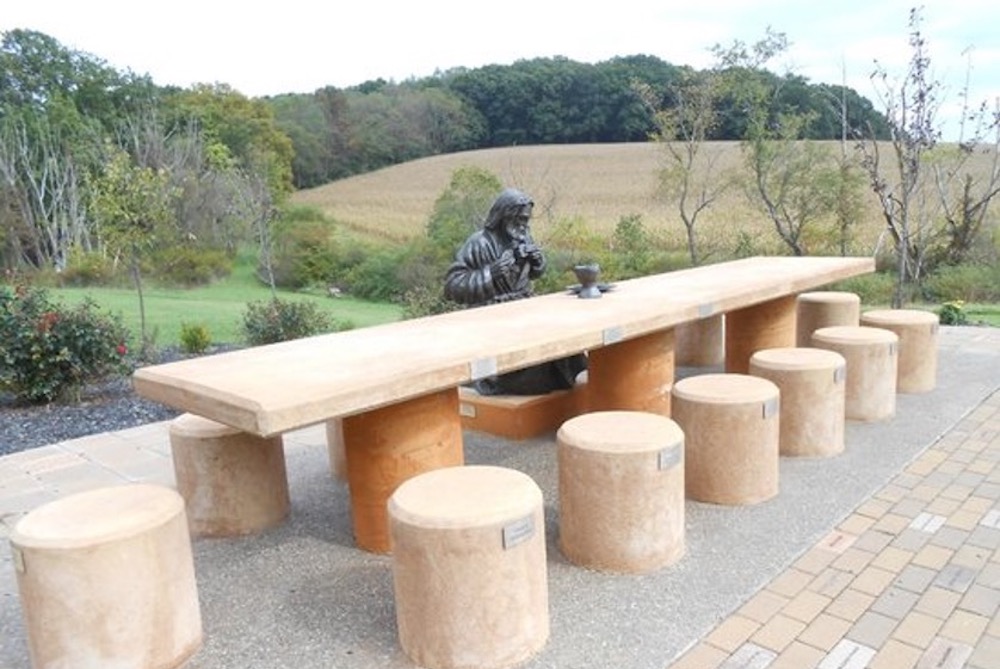 Both pontiffs lavishly praised and blessed Schmalz's works, including "Homeless Jesus," which Francis had installed in 2018 outside a former Vatican palace, Palazzo Migliori. Now 50 homeless men and women who stay in the former palace pass "Homeless Jesus" every day.

Schmalz's sculptures invite us to touch the wounds of the sick, the hungry, the imprisoned, the naked Jesus; to gaze into his downcast eyes; to sit at one of the 12 empty seats at "The Last Supper" sculptures in Michigan, Florida, Pennsylvania and elsewhere.

The sculptor also knows God transcends race and ethnic groups. He's sculpted an African Jesus, now displayed in an archdiocesan atrium in Atlanta, and an African body of the crucified Christ for a Catholic shrine in Tanzania. He's working on an African Mother and Christ child and plans sculptures featuring other racial and ethnic groups.

"I always thought, 'How would Jesus like to be sculpted?' " Schmalz says. "I think Jesus would want to be represented in art exactly how he represented himself. And if you look at Matthew 25, he didn't just say it's good to feed the hungry, it's good to give to the poor. He said, 'When you help the poor and the hungry, you are helping me, and if you do, you go to heaven. And if you don't, you go to hell.' "

But while popes and millions of the faithful have embraced Schmalz's take on Jesus identifying with the marginalized, not everybody has.

"Some call it creepy, insulting to Jesus or say it doesn't reflect well on their communities," Schmalz says. Others, mistaking "Homeless Jesus" for a dead man, have dialed 911.

For more than a year, though, "Homeless Jesus" had no home. Catholic Church leaders rejected proposals to install it, among other places, outside St. Patrick's Cathedral in New York and St. Michael's Cathedral in Toronto. 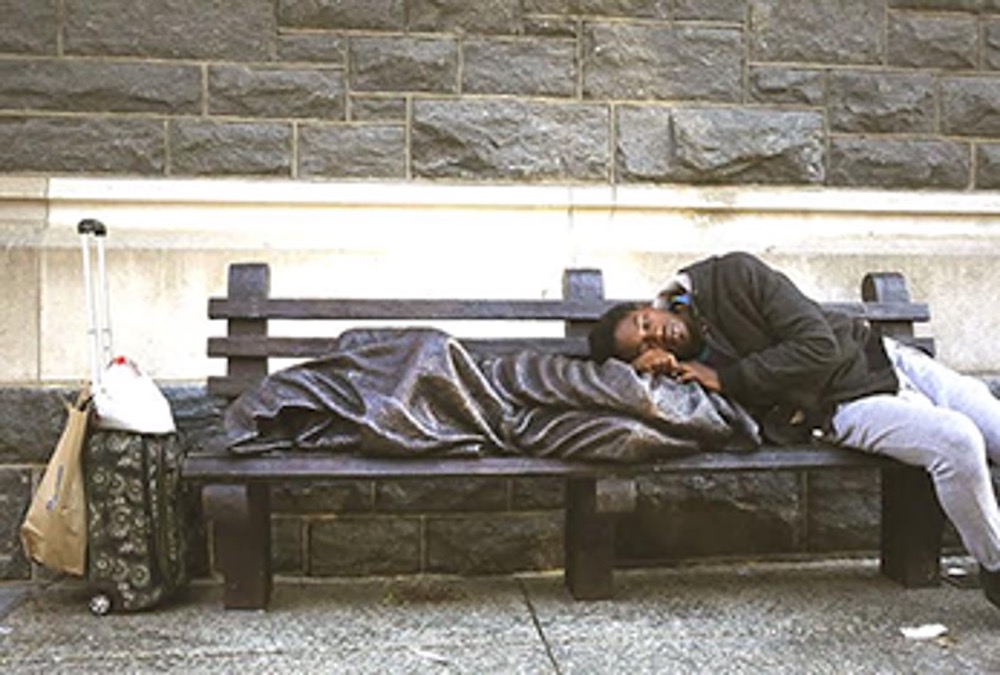 "Many say 'Homeless Jesus' is shocking, but I respond that it's only as shocking as the Gospels," Schmalz says. "Part of the Bible is about comfort, but it is also meant to challenge us."

It seems fitting that Jesuit Fr. Peter Larisey, the priest who finally found "Homeless Jesus" its first home, at Regis College in Toronto, had been a spiritual director, an inspiration, an anchor to Schmalz for three decades.

Schmalz stayed in touch with Larisey — who had been an art lover and author with a doctorate in art history from Columbia University and counseled many young artists — until the priest died of COVID-19 on April 30 in Toronto.

"A lot of people said, 'You don't just become a hermit and sleep on a board and do your artwork,' but Father Peter said, 'This is absolutely amazing; this is wonderful.' He taught me the spirit is found, yes, in the church, but also in love for everyone, and spirituality is found in and outside the church in that love."

Fr. Ray Chase, the pastor of the 180-year-old St. Vincent de Paul Church in downtown Baltimore, has long been a fan of Schmalz's work — and had on his desk a miniature "Homeless Jesus" he bought on Amazon a few years before the installation of the life-size version amid the trees outside the church in July 2018.

In Baltimore, where more than 3,000 people are homeless any given night, Chase says: "To me, 'Homeless Jesus' is an appreciation of how full the incarnation is. What it means is we have to see beyond the labels — homeless, addict, alcoholic, mentally ill, dirty, prostitute — and see Christ in the other person. We just can't follow the nice things or the important things Jesus says. We have to struggle with how to help the least among us and see what Jesus sees in that person, that they are genuinely loved for who they are."

Chase suggests "Homeless Jesus" might also provide some comfort to the marginalized.

He recalls the homeless alcoholic man he saw in late 2018.

"He was sitting at Jesus' feet and lying across Jesus and embracing him, and there was just something so poignant about that," Chase says. "I want to believe he found some comfort there." 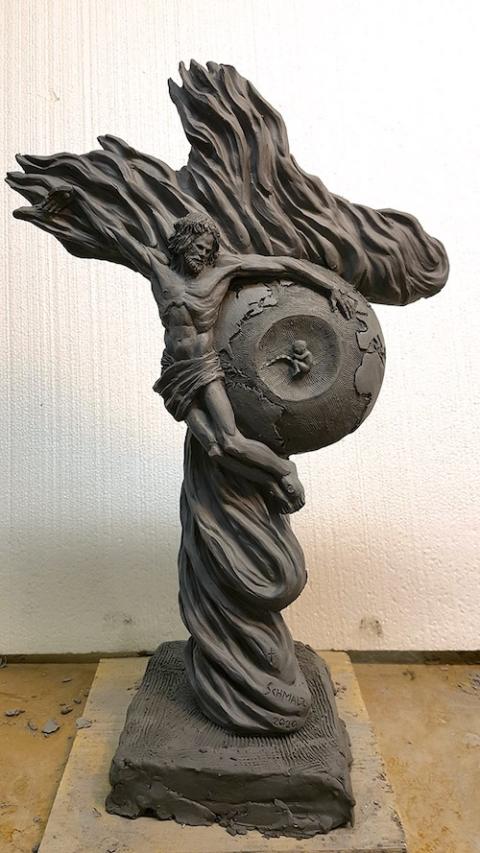 Clay model of "Jesus 2020" by Timothy Schmalz shows Christ hanging by his left wrist on a crucifix in flames. His right arm embraces the Earth, an unborn child at its center. (Timothy Schmalz)

Schmalz's latest works prove as timeless as the Scripture and as timely as today's headlines.

"Angels Unawares," installed in St. Peter's Square on World Day of Migrants and Refugees last September, commemorates migrants throughout history fleeing genocide, slavery, war, hunger, persecution. The 20-foot-long, 11-foot-tall bronze monument portrays 140 migrants and refugees crammed in a boat. Among them: Joseph, Mary and the infant Jesus fleeing to Egypt; enslaved Africans seeking freedom; Irish driven from their country by the potato famine; Native Americans on the Trail of Tears, forced to abandon their homelands; a Hasidic Jew escaping Nazi Germany; Central Americans seeking new lives across the U.S. border; a Muslim forced out of Syria by civil war.

Schmalz found inspiration for the monument, as he has for many of his works in the past four years, as he sculpted it for a year while listening to 15 hours of Bible passages daily on CDs set on repeat function. A single line in Hebrews 13:2 inspired the "Angels Unawares" sculpture: "Do not neglect to show hospitality to strangers, for thereby some have entertained angels unawares."

"Health Care Prayer" — another timely piece, in clay form that will be cast in bronze later — shows a health care worker in a mask and other protective gear kneeling over the Earth. And praying. An angel stands behind them during the COVID-19 pandemic. (Schmalz says he intentionally left the gender unclear). The angel's hands rest on the worker's shoulder, her gaze fixed on the globe.

His right arm embraces the Earth, an unborn child at its center, the hope of new life and light amid the darkness of a world pandemic and the flames of hatred and divisiveness in these febrile times.