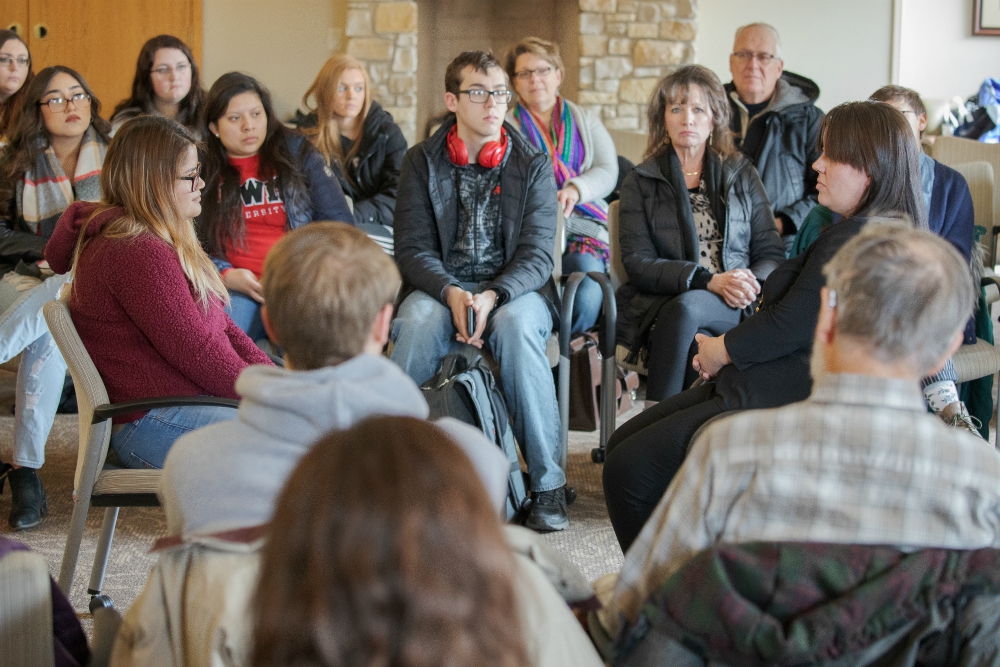 Heather Rivett, right, an actor in "The Visiting Room," sits facing an audience member during a performance March 4 at Lewis University in Romeoville, Illinois. (Joseph Glatz)

They start with an imaginary barrier, the "fourth wall" that separates performers from their audience. During a performance of "The Visiting Room," audience members take turns sitting in a chair on stage, facing an actor in another chair who speaks to them directly, as if they were really visiting a prisoner.

The result is an experience that makes some audience members visibly emotional and that draws them into a post-show discussion with the actors. 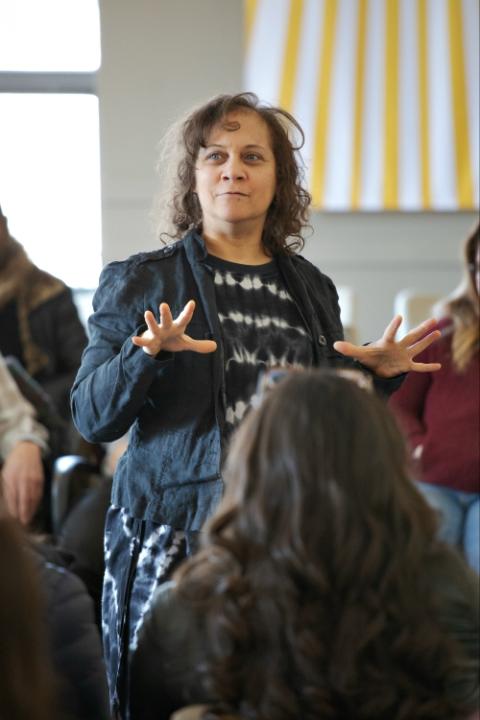 Audience members often say some version of "I can connect with part of your story and now I understand a lot more about how people, everyday people, end up in the prison system," said Mars Caulton, a program facilitator for Still Point. She led the creative writing aspects of "The Visiting Room" while Álvarez directed acting.

After receiving that audience response at similar shows, Caulton decided to make "I was just like you" the first writing prompt for the 12-week theater workshop that created "The Visiting Room." The workshop was offered to residents of Grace House, a voluntary transitional program in Chicago for women exiting prison, sponsored by St. Leonard's Ministries.

"People have strong emotional responses to that piece because you have someone looking into your eyes, telling you, 'I was just like you. I cared about these things. I had a loving mother. I liked to date.' " Álvarez said.

"But then, of course, to some degree this person is also not like you because their life journey has taken them on a very, very different path. ... It kind of forces us to realize that some of us are born with privilege, and that means that we don't have to make certain choices in our lives that could lead to being in prison."

Seeing people moved by their poetry and acting — Caulton said about a third of the audience at their opening performance was weeping — can be a powerful experience for the actors, as can feeling that they are helping change people's thinking about criminal justice and incarceration.

It allows them "to feel that they have something helpful to contribute to society, and I think that performing for audiences who have not been in jail feels a little bit like that, like contributing to the public conversation about incarceration," Álvarez said.

While the program at Grace House is relatively new, Still Point has been working with incarcerated women for more than 20 years, starting just a few years after its founding in 1993 by Lisa Wagner-Carollo.

Wagner-Carollo wanted to work in her own community as well as raise consciousness about social justice and spirituality through traveling shows. The Persephone Project, which began by working with women who were still in federal prison, was a response to that desire.

It eventually led to the writing and acting workshops at Grace House. They meet for two hours each week and pay actors for attending rehearsals and performances. The program helps participants build job skills and gives them a "new perspective on themselves," Wagner-Carollo said.

"Just to see that they can accomplish things, set a goal and follow through, I think is very empowering," she said.

Yet working with recently incarcerated women presents its own set of challenges.

While some people in the program might have experience with some theater or performance, most don't; participants aren't recruited on the basis of experience.

Because they are in transitional situations, many women drop out of the program. A class could start with over a dozen but shrink dramatically. "The Visiting Room" was down to four actors by its first performance, and now has only two.

Some participants might have trouble with being on time, reliability or self-discipline, Álvarez said, while Caulton brought up complications that can arise related to transportation, ankle monitors and parole restrictions. "These are women that have complicated lives, but frankly most of us do," she said.

Both Caulton and Álvarez agreed that the program can be "therapeutic" for those involved, as it helps them to reflect and open up.

Caulton tries to make it explicit from the beginning that writing involves choices about how much participants are ready to share.

She starts with humorous warm-ups "because right away if you're not willing to be vulnerable and be silly in front of people — you're gonna absolutely refuse to make animal sounds with us if we're doing some funny game — well, then this probably isn't for you, and you're probably not going to stick with it because you've got to be able to get out of the box."

Part of the point, she said, "is to help women try on different shoes. The shoes that they already had on have a good likelihood of landing them back where they started a few years ago, so we're actually trying to help women develop some different ways of walking in the world, and some of that has to be the ability to get silly and laugh at yourself."

Those who stick with the program often express how much they've learned or how hard it's been to speak about difficult subjects for the first time, Caulton said.

One actor, Heather Rivett, moved into Grace House in 2016 and enjoyed the program so much that she's returned to participate again even though she's moved out. It helped her to overcome a fear of public speaking and to be more open.

"Because of them I speak more freely about my past and what I've been through and what I've done and where I'm at now," Rivett said. 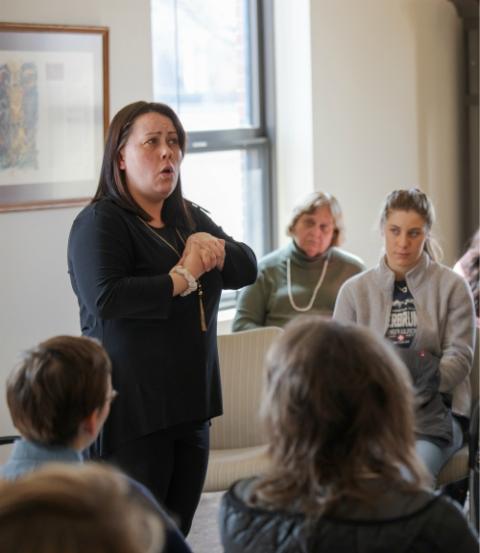 "I was kind of iffy about telling my story, but you never know who you can help, or who's going through the same thing and just doesn't want to or doesn't know how to talk about it. I would say if I can just help one person I feel successful, and they helped me be able to do that," she added.

Rivett says she comes from a "private" family where going to prison was "unspeakable." But when she shares her story through poetry, "they absolutely love it and they have become more open."

Rivett's favorite piece in "The Visiting Room" is an "I am from" poem that participants created from a popular template that asks people to fill in specific objects, people, places and experiences from their past. "We thought it was going to sound really silly, but it told a really awesome story and I feel like our audiences loved it," she said.

Rivett "read that poem to her father after we had workshopped it and gotten it into its final form," Caulton said. "She said that her usually not terribly emotional father cried when he heard this poem about the different things in her childhood that stuck with her."

Spoken-word poetry can be "more moving than just writing a whole long essay," Caulton said. "You kind of cook the water out of it when you do spoken-word."

Another piece that stood out to Caulton was also one that Rivett performed, a childhood story performed near the end of the show that ended up serving as its much-needed comic relief.

"The show is about women coming through the prison system, starting with challenges in their life and then coming out, returning home, and looking to transform their life," Caulton said. "There should be a sense [that] there's something joyous near the end of this."

A version of this story appeared in the July 26-Aug 8, 2019 print issue under the headline: 'The Visiting Room' creates connections.