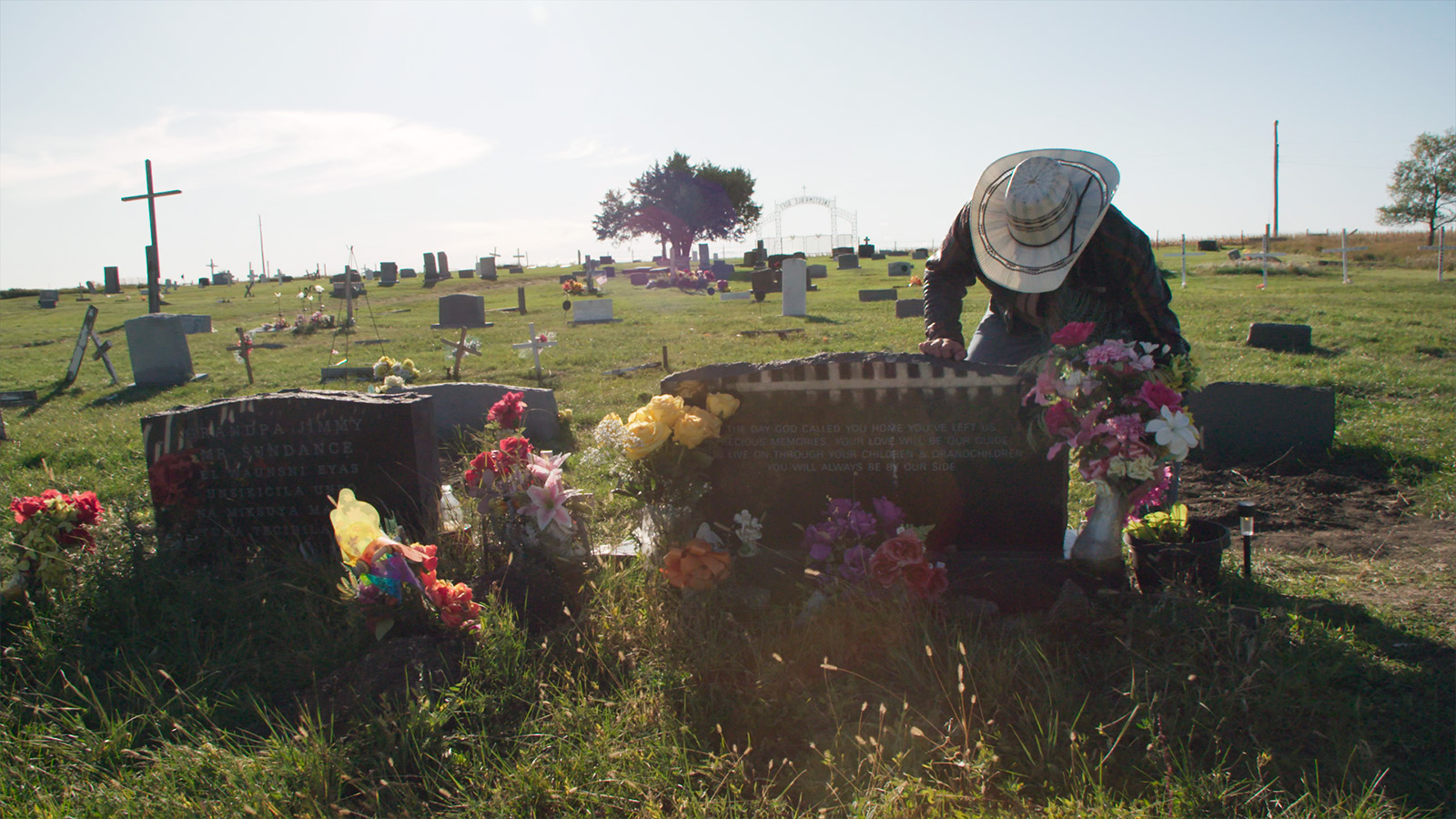 Julius visits a graveyard in the documentary “What Do You Believe Now?” (RNS/courtesy of Good Docs)

In 2002, filmmaker Sarah Feinbloom interviewed six millennial teenagers about their faith traditions for a documentary titled "What Do You Believe?"

Those millennials included Anthony, a Catholic who struggled to reconcile faith and peer pressure; Mazouza, a Muslim who confidently wore hijab; and David, a Jew who said he hoped he believed in God but wasn't sure after he learned about the Holocaust and slavery and saw loved ones struggle.

They also included Carina, who felt the culture's emphasis on excess conflicted with her Buddhist values; Morgan, a pagan who believed "the earth is a magical place"; and Julius, who practiced his traditional Lakota beliefs and trusted that "God is everywhere."

What Do You Believe Now? (Official Trailer) from GOOD DOCS on Vimeo.

Seventeen years later, Feinbloom is back with "What Do You Believe Now?"

She caught up with each of the millennials featured in her first film, now in their 30s, to chronicle how their faith has changed since they were teenagers.

Pew Research Center data has characterized millennials as "nones" — those who are religiously unaffiliated. Fewer young adults belong to any particular faith than did their parents' and grandparents' generations — even when they were the same age, according to Pew.

But that doesn't mean millennials are uninterested in religion and spirituality — at least, not the ones Feinbloom has followed now for more than a decade, she said.

"Every documentary filmmaker, they sort of have this idea that they're going to try to help and make things better. In Judaism there's an expression called 'tikkun olam' — repairing the world, bringing all the different shards of glass that have been shattered back together," she said.

"That's what I hope is happening, and I hope the film also kind of opens that up."

"What Do You Believe Now?" will make its world premiere Sunday (Oct. 6) at the Mill Valley Film Festival in San Rafael, California. And the filmmaker said she hopes it will give viewers a glimpse into the lives of their neighbors who may believe differently than they do, but who still love their children and worship God and love who they love, just like they do.

Feinbloom talked to Religion News Service about how she reconnected with the millennials she interviewed 17 years ago and how their faith journeys mirror the national trends.

What made you decide to revisit these millennials' stories?

To be honest, I really never planned to do a follow-up. Over the years, I showed the original one in many, many places, and people would always ask me, "Well, what happened to them? You should do a follow-up." And I would think to myself, "Oh, no, it was so exhausting. I still owe money on credit cards. I can't do a follow-up." But somehow in my unconscious or subconscious, I kept lugging around the original tapes. I had 200 hours of footage.

I made the film before Facebook and any social media, but when Facebook became popular, I started to hear from some of them. Julius found me, and that was thrilling. And then he wanted to talk to me, and he said, "Sarah, I really think you should do a follow up. I want to talk about what's happening on the reservation."

I ended up speaking to him, and I'd already kind of known there was a lot of youth suicide on the reservation. But that really motivated me. So when he asked me, it was kind of like I felt a responsibility to heed his call, because I feel connected to all six of them in very deep ways and grateful to them — I think of them like my children.

Where did the idea come from for the original film — to talk to teenagers from a number of different faith traditions and hear what that meant to them?

I'm Jewish, so I was raised with an awareness that we were a minority and that Jews had been persecuted. I had that in my head, but when I was 7, my mom came out as a lesbian. That was also a long time ago before it was really accepted the way it is. And so, all of a sudden, I was kind of thrust into this national debate that was going on about should we take children away from their parents. That debate was very much fueled by the religious conservatives who objected to homosexuality. And so there I was, this little kid, afraid I was going to get taken away from my mother, and I was exposed to a certain kind of Christianity that was very exclusive and rejecting of my family. That kind of commenced my lifelong preoccupation with what is religion for and why is it used for these purposes?

Fast-forward, I was teaching in the Boston public schools, and I had one Muslim student who wore the hijab, and she was just so isolated and misunderstood. I was looking around and thinking, you know, we talk about diversity and we talk about women's rights and a lot of things, but where is the conversation with young people, especially where they can learn about other religions?

As I did my research, (I learned) this is one of the most religiously diverse countries in the world. I wanted to show that. I wanted to make sure marginalized voices and perspectives were included. I wanted my students to be able to kind of wrap their heads around what does it mean to live in a religiously pluralistic society.

I know you probably don't want to give too much away, but was there one millennial's story that particularly surprised you years later?

I was surprised that Mazouza took off her veil and (was) really interested in the way she reinterpreted Islam in a kind of feminist way — but also she wouldn't necessarily see it that way.

I was lucky all of them took an interesting turn — some of them, very sad. Some of them, they're happier than when they were teenagers. But they all kind of did something interesting and with a twist. None of their outcomes were similar to each other.

Did you come away with any common theme from these millennials' faith journeys? It seems like that theme might be: There is no one way that faith progresses or a journey that it makes.

As I delve back into this, I was reading the Pew Research Center's research about the nones and what was happening with millennials. So I was kind of going, did I capture this trend? What is this trend?

There are these interesting trends of young people moving away from organized religion, but that doesn't mean they're not interested in these big theological spiritual questions. They are.

I think that's really cool. Some of the people who write about the nones say it's really like a crisis because these institutions are losing membership, and that may be true, but what is emerging to me is fascinating.

Do you feel like these millennials' stories fit those trends we hear discussed about millennial religion or spirituality?

It's cool to look at the six of them and say, maybe this is happening with them. Like Carina (is wrestling with questions like): I really want to believe in Jesus and that's not necessarily what I was raised with, but I need it. Can I be both? Do I have to define myself?

I think that's fascinating. I think it's all being expedited by the internet and by people being able to find ideas that they might not have had access to.