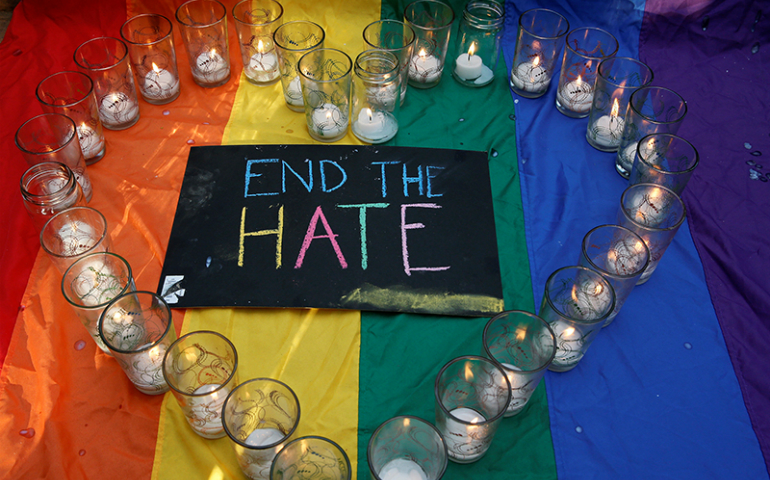 University of the Philippines students display glasses with lit candles and a placard as a tribute to those killed in the Pulse nightclub mass shooting in Orlando, Fla., during a protest at the school campus in Quezon city, Metro Manila, on June 14, 2016. (REUTERS/Erik De Castro)

The 2016 election — with its polarizing campaign and surprising result — produced not only an unexpected president. It also gave us several of the year’s biggest religion news stories.

And while religion gave billions of people meaning in their lives and inspired good deeds, in news coverage it was linked to bloodshed and blamed for fueling bigotry.

Here is a recap of key stories and trends this year:

Sometimes a number tells us a lot. This year, that number was 81. That was the percentage of white evangelicals who, if the exit polls were accurate, cast ballots for Trump. They helped sway the vote in a way that suggested predictions of the decline of “white Christian America” may be premature.

Despite some pretty outspoken reservations on the part of some influential conservative Christians about Trump’s character, he also had his Christian boosters. For so-called Trumpvangelicals, a man whose predatory view of sex seemed more in tune with the movie “Animal House” was worthy of the highest office in the land.

And it followed the rejection of primary candidates who seemed to more clearly espouse their conservative values.

But can they count on the brash real estate tycoon and reality TV star who has been, it seems, on both sides of almost every issue?

So far, yes. The conservatives’ hand in his victory — some of them believe it was actually God’s hand — seems to have led the president-elect to stack his Cabinet with religious conservatives — including a climate change denier and a national security adviser who called Islam “a political ideology hiding behind a religion.”

What’s in a name?

Given evangelicals’ support for Trump, some started questioning the label. They felt the movement had become politicized and its ideals were falling by the wayside. And some just couldn’t identify with the evangelicalism of some key pro-Trump pastors, especially those who promise riches as a reward for faith.

“Any definition that includes both a health and wealth prosperity gospel teacher and me is a word that’s so broad it’s meaningless,” Russell Moore, president of the Ethics & Religious Liberty Commission of the Southern Baptist Convention, told RNS evangelical beat reporter Emily McFarlan Miller.

What is clear is that the election exposed deep fissures in American evangelical Christianity.

One fissure that broke open separately from the election was over the theological view of nonevangelicals, and in particular Muslims. It began last December when Wheaton College began termination proceedings against professor Larycia Hawkins after she donned a Muslim veil and asserted that Muslims and Christians worship the same God.

It was meant as a gesture of solidarity with American Muslims but was seen by administrators and donors at the school, known as the “evangelical Harvard,” as a violation of its statement of faith. Hawkins eventually departed Wheaton, leaving unanswered the question of how far evangelicals can go in accepting the legitimacy of other faiths’ views of God.

Religious bigotry in the campaign

“I think Islam hates us,” he said after proposing a ban on immigrants who profess the faith, which he later modified.

He justified profiling American Muslims and surveillance of American mosques. And he attacked the Gold Star parents of Army Capt. Humayun Khan, a Muslim U.S. soldier killed in Iraq, after his parents took the stage at the Democratic convention to endorse Hillary Clinton. That led to an outcry against the Republican candidate, but Muslims reported widespread harassment by his supporters.

Many American Muslims are worried about their future under a Trump administration. But at least they have a new and, to some, surprising ally. The American Jewish Committee formed a partnership against bigotry with the Islamic Society of North America, both concerned by the vitriol Trump campaign unleashed against minorities.

A portion of the anti-Muslim sentiment could be considered a fearful reaction to the immigrant crisis and the violence stemming from political and theological conflicts within the Islamic world, much of it fueled by jihadi violence and the 13-century-old Sunni-Shiite schism.

After more than half a decade, the war in Syria has killed more than 400,000 people and sent millions fleeing. There was at least some relief across the border as Iraqi government and Kurdish Peshmerga forces backed by American advisers and air power pushed Islamic State militants out of key cities in the north, opening up the possibility for refugees — including many Christians — to return to their homes. Many living on the Nineveh Plain had been threatened with death if they didn’t convert to Islam or agree to pay a tax.

In Europe, a man ISIS claimed afterward was its “soldier” drove a Renault cargo truck through the beachside French city Nice, killing 84 people and injuring hundreds. Two weeks later, armed men stormed a church in northern France and slit the throat of a priest as he was celebrating Mass. The attacks were cited when several French beach towns decided to ban burkinis.

There were massive bombings of churches in Pakistan and Egypt. Atheist bloggers, academics and a Hindu priest were hacked to death in Bangladesh.

And in the United States, a Muslim man opened fire in a gay nightclub in Orlando, killing 49 people, and swearing allegiance to ISIS leader Abu Bakr al-Baghdadi.

Was there any good news?

Not all stories were depressing. With his Oct. 31 visit to Sweden to mark the beginning of the 500th anniversary of the Protestant Reformation, Pope Francis took a big step toward healing a division that rivals the Sunni-Shiite rift, if not in length of time then in the wars it generated.

Speaking of bygones, a Catholic pope and a Russian Orthodox patriarch met for the first time — in Cuba of all places — since the East-West Schism of 1054. But an attempt to hold the first pan-Orthodox council in 1,200 years fell short because of a Russian boycott.

And while the world seemed to grow accustomed to Pope Francis' papacy, he did cause a stir by appearing to suggest that remarried Catholics should be able to receive Communion.

In North Dakota, under the flags of 280 Native American nations and sustained by their spiritual practices, the Standing Rock Sioux tribe rallied to stop the construction of a pipeline planned through what they consider to be sacred grounds.

In Oregon, United Methodists at their General Conference grappled with demands for LGBT equality and formed a panel to consider them. And in Britain, Anglican primates voted to suspend the LGBT-affirming U.S. Episcopal Church from certain policy decisions.

After a year of downbeat developments, few may have regrets about it ending. Indeed, some may even curse 2016. Here's to hoping that next year brings better news, religious and otherwise.