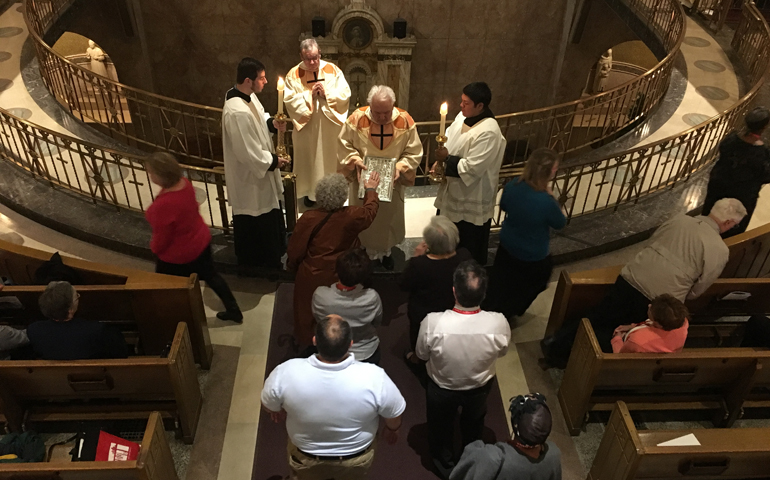 Detroit synod members take their oath of fidelity on the Book of Gospels Nov. 18 at the Opening Mass at St. Aloysius in Detroit.

It is difficult not to draw parallels between the "Motor City Makeover" and the Detroit archdiocese's new evangelization initiative called "Unleash the Gospel." As Detroit embarks on a revitalization effort for a city that once held nearly three times the population that currently resides there, a similar effort is happening within the archdiocese.

On an unseasonably warm November day, 400 members of the Detroit archdiocese's "Synod '16" filed into St. Aloysius Catholic Church to discuss that effort. The majestic three-story church stands in stark contrast to the dilapidated, abandoned and run-down buildings that surround it.

Joe Kohn, director of public relations, has been with the archdiocese for 13 years. He has seen the changes and challenges the city and archdiocese have gone through, and he feels that the context of the city's issues is key to understanding the importance of the synod and the topics discussed.

"Detroit, like many other cities, we have seen a decline in the Catholic population, but more so than a lot of other cities in the United States," Kohn told NCR. "We have seen precipitous decline and growing racial divide over the past several decades. That context certainly is important to Synod '16."

Detroit Archbishop Allen Vigneron is intimately aware of these difficulties. When Vigneron took the reins of the archdiocese in 2009, it was losing $1.2 million in cash every month, according to the archdiocese's website.

"Part of the challenge we face in our community is that we've been through some very tough times and we're a community whose way of just civic living has been very challenged and people themselves have just felt powerless," he said.

Kohn explained that more than 30 schools have been closed or merged since 2005. Around the same time, Detroit filed for the largest Chapter 9 bankruptcy, as reported by the Detroit Free Press.

"Like a lot of organizations that subsist in our city, we've had to reorganize structurally, we've had to part with some churches and to adapt to shifting populations, especially in the city, a quickly decreasing population," Kohn said. "That kind of thing has been the groundwork for [Synod '16]."

Despite the issues, the archdiocese continues to "rise again," a translation of the Latin social media hashtag (#resurgetdetroit) the archdiocese uses for the synod. The phrase was coined by Fr. Gabriel Richard after a Detroit church was destroyed in a fire. The full phrase, "We hope for better things. It will rise from the ashes," is also the city motto for Detroit.

The city and archdiocese started their "rise" in 2012, when the archdiocese balanced its budget. In 2014, Detroit exited their bankruptcy case.

"What we've done in recent years in terms of pastoral planning with our parishes in terms of fundraising, getting a lot of our parishes on good financial footing, that has all been in earnest and anticipation of redoubling ourselves toward the mission of our church. And Synod '16 is a very special part of that," said Kohn.

Vigneron talked to NCR prior to Synod '16 about the importance of refocusing the mission of the church and archdiocese.

"When I came back to Detroit in '09, we were in a mess civically, economically," he said. "Those were the times when people were talking about the possibility of General Motors going bankrupt. And one of the things I saw, leaders who could get back to the core mission ... they were able to take their community forward. And I think we're doing very much the same thing."

Vigneron's own innovative approach came in the form of the New Evangelization Initiative, which later transformed to the Unleash the Gospel team after Synod '16 was announced. Throughout the initiative, parishioners in the archdiocese were invited to be a part of the discussions through parish gatherings, and praise and worship nights. Kohn said tens of thousands of Catholics have been part of the lead-up to the synod, something the archdiocese did not anticipate, he said.

"The fact that we're talking about acting, being engaged and moving forward has provoked, been a catalyst for a lot of energy," said Vigneron.

"By my temperament, I'm not a very adventurous person," he added. "And this has been like John Paul said, a launch out into the deep water, and it is turning out to be so very rewarding."

Five years after the creation of the initiative in 2011, the synod became a reality Nov. 18-20.

Vigneron's excitement was palpable at the opening Mass for the synod on Nov. 18 and he thanked the synod members for the "generosity you have shown in opening your hearts to this synod."

After Mass, members moved the next block over to the Westin Book Cadillac Detroit Hotel to begin their work. While in synod sessions throughout the weekend, members broke off into small groups to discuss 46 propositions categorized into four themes: individuals, families, parishes and archdiocesan central services. The propositions had been synthesized from 11,000 responses gathered in the spring during 240 parish meetings called Parish Dialogue Gatherings.

According to The Michigan Catholic, the archdiocese's newspaper, these are the propositions that garnered the most support in each category during the synod:

While the propositions played an important part, many synod members felt some of the more fruitful discussions weren't the ones that received the most votes.

Members often talked about their excitement to be part of the synod and the change it has already brought in their respective lives.

Parishioners from the Detroit archdiocese came out to support synod members as they walked from their meeting space to mass throughout the weekend. (NCR/Kristen Whitney Daniels)

"It's a historical moment in time, in the history of the church and I am just so privileged to be here at this time," said Sr. Margretta Wojcik, who was representing her order, the community of the Sisters of St. Francis of Sylvania, Ohio, at the synod.

Synod member Jacob Kanitz, who represented St. Gabriel Parish in Ida, Mich., added that the spiritual preparation required of members was "refreshing" and felt it helped him to better prepare for the event.

Vigneron said that part of the excitement is due to member's "buy-in" to the synod mission.

"This tag line of 'band of joyful missionary disciples' comes from Pope Francis," he said. "And I think it has resonated greatly with people. I hear people themselves quoting it, so that to me is an indication that it resonates with them. I just feel there is a tremendous amount of buy-in and excitement about this moving forward in the life of the church."

"Archbishop Vigneron has done a lot of things in the last probably two years ... out in the parishes and the archdiocese of working towards having us being more of an evangelizing community, understanding what it really means to be a Catholic. That we're called to be a disciple and we're called to evangelize," said Ashe.

Claudia Gomez, a synod member at one of the Spanish-speaking tables, hoped that the synod would result in a "new DNA" for the children growing up in the church.

Synod members gather for the closing mass at St. Aloysius in Detroit on Nov. 20. Almost 400 lay and religious members from the Detroit archdiocese gathered during the weekend to discuss the needs of the people and the church. (NCR/Kristen Whitney Daniels)

Although many members mentioned the joy surrounding the synod, that doesn't mean members shied away from some of the more difficult topics.

Leon Dixon, a synod facilitator and director of black Catholic ministries for the archdiocese, saw progress being made at the synod, but also feels there is room for improvement.

"I think [people of color are] being heard, but not to the levels we thought it would be," said Dixon. "I'm not diminishing what's happening now because considering where we came from, we've come a long way. … There's always room to take it up one notch."

As part of the archbishop's focus of addressing racism in the community, he met with Dixon and other African-American leaders in the church for an "informal caucus."

One of the more hopeful moments for Dixon came when he saw that many tables had voted cultural competency as a priority. "Now we're going to have to be intentional about what is it culturally that we're not doing. I think that's the most important take away," said Dixon.

Michael Byrnes, the Detroit auxiliary bishop recently named coadjutor for the Agana, Gaum, archdiocese, also oversaw the organization of Synod '16 and was happy to see the topic of racism come up in many discussions.

"I'm really, really grateful to build within our parishes a capacity to welcome the 'other,'" he said. "I mean we were naming things of ethnicity, of race, gender and sexual orientation. … It doesn't matter who you are, what you're dealing with. And now this is going to take a while to grow but that was named in the last session and got a lot of support."

Many also talked about the synod beginning the process of healing for an archdiocese that has faced many difficulties.

"I think the archbishop calling the synod at this time, in our nation, and in our city and in the time of the church, that there's a great purpose to that. And there's a lot of hope that there will be some new life that's breathed into the church," said Rahki McCormick, an expert advisor, whose focus was campus and young adult ministry for the synod.

"I think this is the beginning way of the archdiocese bridging that gap between the church and the Detroit community," he said. "I think sometimes ... there's been a kind of disconnect between the church and the city and I think this is a good start for rebuilding relationships, because we had a lot of school closings in the city and I think that affected a lot of people."

Byrnes, a native of Detroit, acknowledged that the archdiocese needed to pay better attention to all of the "wounds" caused by the city and church mergers. "We don't know exactly how we would respond to that. We know we have to and that was something that got lifted up strongly," he said.

Eyes will be on the archdiocese and the archbishop as they sift through the information gathered during the synod. Many will look to see how the momentum generated by the synod translates into practical results. Official results of Synod '16 won't be released until June 4, 2017, Pentecost Sunday.

Byrnes, who will be leaving to fulfill his new role in Guam in January, is confident that the archbishop's words will result in action.

"He's got a huge vision, this isn't just about becoming more pious, this is really about taking action for social, neighborhood transformation," he said. "The wounds in the city of Detroit are deep, especially wounds in the family. And he's got a tremendous heart for that. We can't just stop at 'Jesus save me, so that I can go to heaven.' It has to be 'Jesus, save me, so that I can help heal the world.' And I think [the synod members] caught his heart for that."