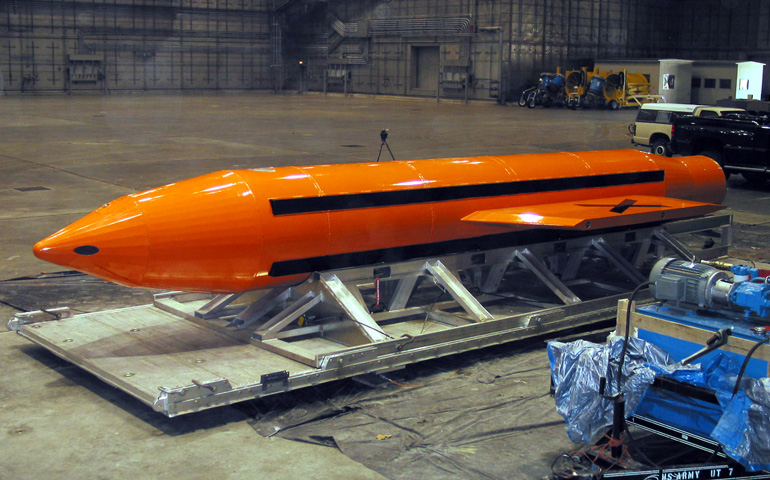 A Massive Ordnance Air Blast (also known as the Mother of All Bombs) weapon is prepared for testing, March 11, 2003, at the Eglin Air Force Armament Center.

Like most baby boomers in America, I was raised in the thick soup of post-World War II paranoia known as the Cold War. Each year at St. Euphrasia Elementary School in Granada Hills, California, we were shown a nine-minute, black-and-white film entitled "Duck and Cover." Made in 1951 by the U.S. Federal Civil Defense Administration, it told the story of Bert the Turtle, who knew just what to do when an atomic bomb was dropped on him:

If you don't remember or are too young to have seen this film, over and over, I encourage you to check it out on YouTube. The light-hearted musical theme that plays throughout – "Dum dum deedle dum dum" – is both childlike and chilling.

Our government actually expected us school children to believe that in the event of nuclear war, dropping to the linoleum and putting our heads under our tiny laminate desks was going to save us.

Interestingly enough, we girls were also told by the Carmelite nuns showing the film that we were to manage this lifesaving maneuver while ensuring our panties never showed from under our plaid uniform jumpers.

Because, I suppose, modesty is paramount, even as one is being vaporized.

The threat of nuclear annihilation was just as real to me as was the likelihood of meeting Satan around every corner. The nuns prepared us for each situation — the latter with a prayer invoking instant protection from Jesus and the angels and saints — and the former with Bert the Turtle's example. In both cases, I spent a lot of time and energy in the 1960s and '70s worrying about my sudden doom, whether spiritual or physical, or both. I was a serious kid.

Jump to 1986. My daughter Chelsea (now 30 and a mother herself) was born in July of that year. Right before her birth, her dad and I had moved into a tiny rental house in Simi Valley, California. The one bedroom home was in a quiet neighborhood, nestled into the base of the foothills at the west end of Simi Valley.

I loved it there because it was Chelsea's first home, and each evening, a salty breeze flowed over those low hills, shaking the leaves in the peach trees and cooling the desert air. On the other side of the hills, there was only flat orchard land between us and the Pacific Ocean.

One sunny autumn morning, when she was about three months old, her dad had gone to work, and I was at the sink, washing dishes. Chelsea was in a bouncy recliner seat, on the floor. She was looking up at me, and I was talking away to her as I wiped a pan dry.

Suddenly, there was a bright flash outside of the large kitchen window. Then a huge boom, which rattled the glass, followed instantly by a deep sonic rumbling that shook everything in the house, including us.

The rumbling went on and on. I dropped the pan in the sink, looked down and saw Chelsea's baby seat trembling slowing across the vinyl floor. My hands shook as I unbuckled the plastic clasp of her tiny seat belt, scooped her out of her chair, crushed her to my chest and ran straight for the closet in my bedroom.

How ludicrous is it that in that horrible moment, when I knew that it had finally happened, that an atomic bomb had been dropped on us and it was end of the world, all I could think of was Bert the Turtle? Dum dum deedle dum dum. …

I pushed the hanging clothes aside and shoved the shoes on the floor out of my way. I crouched on the carpeted floor of the closet, holding my tiny girl, rocking and praying. I prayed for her father at his job, for my brothers and parents, for his family and mine. Chelsea stared up at me, her dark eyes wide and surprised and rapt. What on earth was her mother doing?

Because I was. So sorry. So ashamed that I had not made this world into which she was born any better before she came into it. That we grown-ups, time after time, throughout history, seemed to have done such a poor job of taking care of each other, and the earth. We couldn't seem to stop hurting each other, playing war games with real casualties, and now it was too late.

There was an eerie silence in its place.

I looked down at Chelsea, and she stared up at me, her brown eyes huge in the half light.

I pushed open the closet door with my shoulder, got on my knees then stood, holding her. I listened. Nothing.

I walked tentatively out of the bedroom, down the hall and to the front door. As I turned the knob, I looked down at Chelsea and said, "OK. Here goes."

We stepped over the threshold into the sunny morning air. Birds chirped. Dogs barked. A slight breeze stirred the trees.

I sat down in the grass in our front yard, holding her in my lap, and stared at the sky. Was it over? Was more coming or were we really OK? And if everything was OK, what on earth was that? The flash, the boom, the rumble. What happened?

Now in 1986, we didn't have cell phones, or the internet. I couldn't Google it to see if there was some local news feed telling me what occurred.

I took baby Chelsea back into the house and called her dad at his office, which was about five miles away. He said he and everyone there had felt it, too, and like me, they had all hustled into their Bert the Turtle drill positions. And then nothing.

Later that day, he called me back. He said one of the ladies at his office was married to a man who worked for Rocketdyne, which had a facility just over the hills at the east end of Simi Valley, in Canoga Park. They had tested an engine for the space shuttle that morning. That explained the flash, the boom and the rumble we had all felt.

Three years later, in 1989, the Berlin Wall fell. Then in 1991, the USSR disbanded, and the Cold War as we knew it was officially over. My youngest son Duncan was born in 1992 into what I believed was a safer world. The echoes of the Bert the Turtle song faded from my consciousness, and my three kids never reported any films like that being shown in school.

On Thursday, April 13, the U.S. led by Donald Trump dropped what was described as "the largest non-nuclear bomb" on what was called an "ISIS cave network" in Afghanistan. CNN said that this was first time this "mother of all bombs" had been used in battle, and reported that between 36 and 94 ISIS operatives had been killed. No civilian casualties were listed.

The next day, The Daily Express reported that Vladimir Putin-led Russia revealed that its military possessed what it called the "father of all bombs." Their bomb is supposedly "four times more powerful" than ours.

A few days later, I was babysitting Chelsea's two-year-old daughter Mary. I was scrubbing the pots and pans which I had left to soak overnight, while she sat on the rug at my feet, coloring in her "Finding Dory" coloring book.

She looked up at me, her big blue eyes so reminiscent of her mother's brown ones.

I crouched down and held my arms out, and she jumped up to give me a hug. As she squeezed her chubby arms around my neck, my eyes stung with hot tears. I found myself thinking of the mothers and children in places like Afghanistan, of the families just trying to exist there, to stay alive. No amount of ducking and covering could save them. And I fear the same is true for us, too.

I found myself whispering into Mary's tiny perfect ear, "I am sorry. I am so sorry."