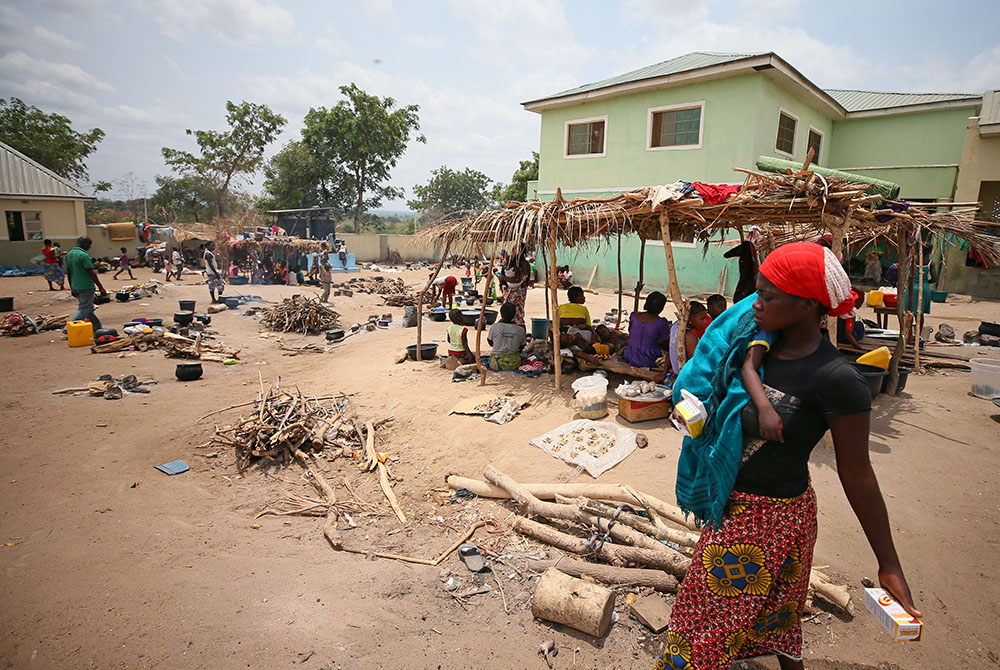 A woman carries a child through a camp in the state of Benue, Nigeria, April 11, 2018. The Catholic Diocese of Makurdi and others condemned the killings of two priests and 17 parishioners of St. Ignatius Catholic Church in the state. (CNS/Afolabi Sotunde, Reuters) 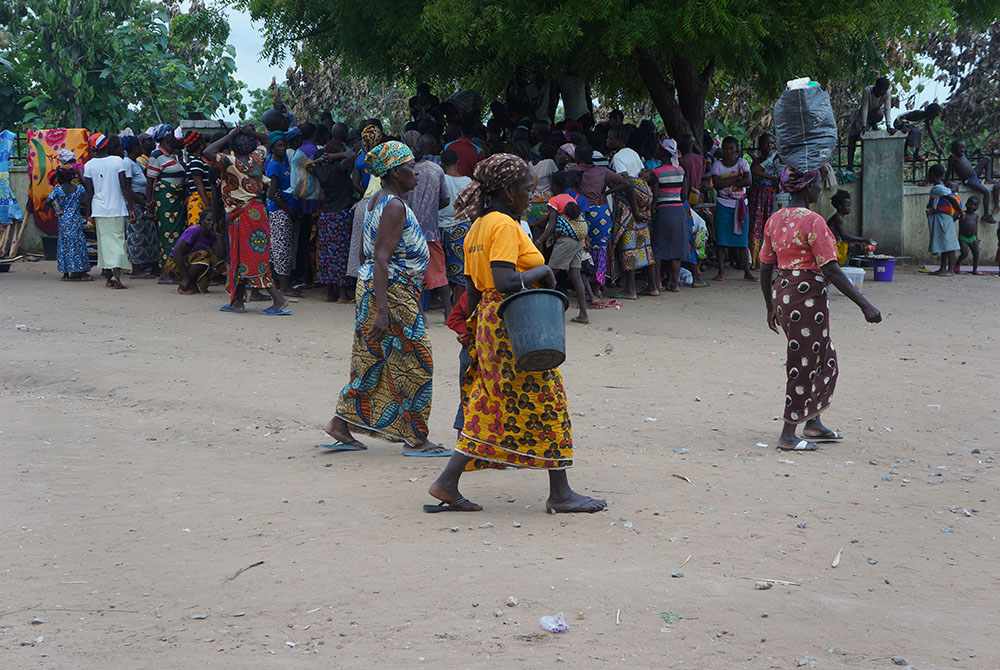 Displaced persons deserted their communities after the attacks by armed herders on January 1, 2018. That month, 73 people, mostly local farmers in Benue, were killed and about 100,000 were displaced. (Patrick Egwu)

On a sweltering Monday afternoon, Jeremiah Ancha sat on a wooden bench in front of a makeshift camp for displaced people in Benue state, in Nigeria's middle belt region. Widely known as the country's food basket because of its extensive agriculture, the state takes its name from the lower Benue River, which flows through it.

Ancha, 48, used to cultivate local crops like millet, corn and cassava on his farm in his home community. But increasing attacks by cattle herders from the Fulani ethnic group have forced him and his neighbors to desert their farmlands and ancestral communities for safety.

In January 2018, according to Reuters, 73 people, mostly local farmers in Benue, were killed and about 100,000 were displaced. Since then, the number of displaced people has spiked to about 500,000, according to the International Organization for Migration and local emergency agencies that respond to the humanitarian needs of some 20 camps for displaced people in the state.

Ancha, who fled his village with his wife and five children, still remembers the traumatic events of that day.

"Our house and farmlands were destroyed when they came, and even now, they still attack at night," he says. "Since they attacked our village, this is where we have been living." 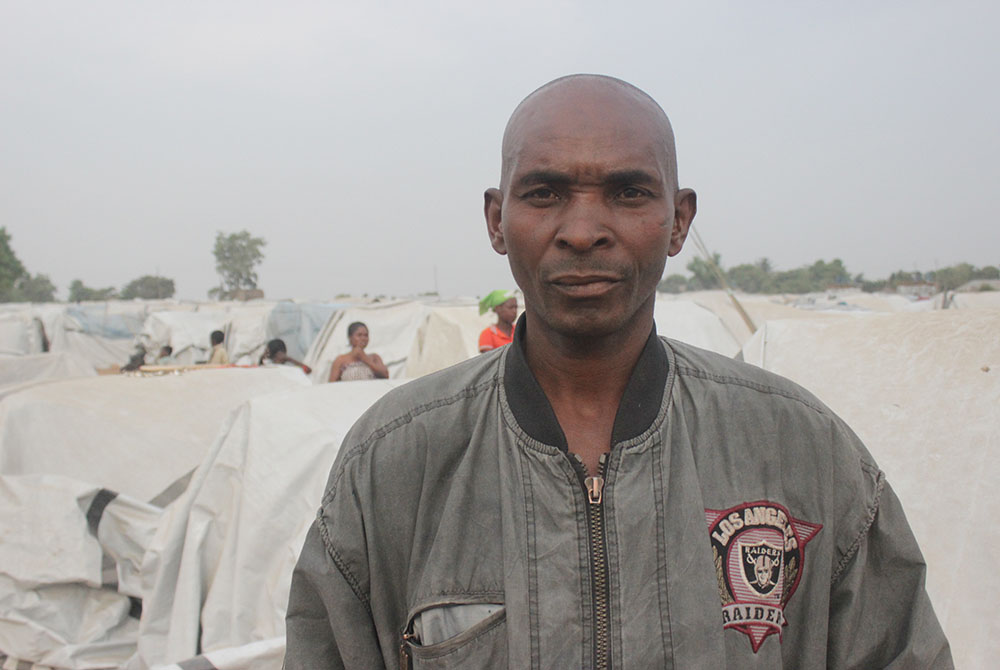 Jeremiah Ancha, pictured in a camp for displaced people in Benue state, in Nigeria's middle belt region, escaped with his two wives and children when the herdsmen attacked on Jan. 1, 2018. (Patrick Egwu)

For decades, the middle belt region has seen rising conflict between local farmers and cattle herders, who migrate regularly with their livestock from the northern part of the country to the south, which has arable land for grazing. This causes friction between the herders and farmers who accuse them of invading their ancestral territory and destroying their farmlands.

The government's proposed policy of allowing open grazing has sparked controversy. Open grazing is the practice of allowing cattle to roam freely in open fields and other land. In doing so, however, the cattle destroy crops, and many people oppose open grazing, calling for the construction of ranches instead. Climate change has aggravated the problem, as the herders are faced with drought and the encroachment of the desert onto grazing land in the north.

The conflict is worsening Nigeria's displacement crisis. Between 2009 and 2018, the number of internally displaced people in Africa rose from 6.4 million to 17.7 million, and more than 2.5 million of them are in Nigeria, according to the United Nations High Commissioner for Refugees, or UNHCR. The humanitarian crisis in the camps is exacerbated by food insecurity and severe malnutrition, the agency says.

Sub-Saharan Africa also hosts more than 26 percent of the world's refugees — 6.3 million in 2018, compared to 2.3 million in 2008, according to the UNHCR. This is partly because of ongoing crises in Nigeria, the Central African Republic and South Sudan.

The government in Benue, the state most affected by the grazing conflict, passed an anti-grazing law in 2017. The law bans herders and their cattle from entering its territory for grazing and imposes a five-year jail term for offenders.

The cattle herders are mostly Muslims, while the farmers are Christians. In Nigeria, a large and diverse nation, Islam is dominant in the north and Christianity in the south. Benue, in the middle belt, is predominantly Christian, with a few clusters of Muslim communities.

In 2018, two Catholic priests and 17 parishioners were killed by herders in Benue during an early morning service. Local parishes in the region have also been attacked, and other killings of Christians have sparked protests across the country.

The Catholic Bishops' Conference of Nigeria and parishioners in the country have regularly condemned the killings and staged protests and demonstrations.

According to the International Crisis Group, the herder-farmer conflicts in Nigeria have at times been deadlier than the Boko Haram insurgency in the country's northeast. In 2016 alone, an estimated 2,500 people were killed and tens of thousands were displaced across the country.

A recent report by the group said the attacks have increased tension between the cattle herders and farming communities, with over 8,000 people killed and more than 200,000 displaced since 2011. Many have sought refuge in neighboring countries.

Critics say the government's response over the years has been inadequate. Nigerian President Muhammadu Buhari is a Muslim from the Fulani north. Nigerian Catholic communities and other Christian leaders have accused him of protecting his cattle-herding kinsmen and not doing enough to end the killings. The Catholic bishops have urged parishioners to protect themselves, saying the government has failed to protect them.

Attacks have increased since Nigeria imposed a lockdown March 30 in an effort to stem the spread of the coronavirus. The middle belt region, which produces a large percentage of the country's food for domestic consumption and export, has been affected most. More than 50 people, mostly Christian farmers, have been killed by armed gunmen since the lockdown began, according to CSW.

By Sept. 4, Nigeria had registered more than 54,000 cases of COVID-19, with 1,051 deaths and more than 42,000 recoveries, according to Nigeria Centre for Disease Control, which is responding to the pandemic along with the Ministry of Health.

"Last week, some villages were attacked and more than 10 people were killed in the process," Paul Tekina, another villager at the camp said. "When this happens, the police go there, but before they arrive, the attackers have already disappeared."

Besides the human toll, the conflict has caused a drop in agricultural income in the region. A 2015 report by Mercy Corps, a global aid organization, says Nigeria's economy is threatened by decadeslong disputes between farmers and pastoralists in the region, and that ending the crisis could add $13.7 billion in annual revenue to the treasury.

The U.N. World Food Program warns that by the end of 2020, COVID-19 could push the number of people suffering from acute hunger to more than 250 million, many of them in Africa. The World Bank predicts the pandemic will drive sub-Saharan Africa into its first recession in 25 years and could also spark a food security crisis on the continent because of declines in food imports, higher transaction costs and reduced domestic demand.

Now that they are away from the places where they were attacked, Ancha and other farmers, most of whom are Catholic, have started cultivating farm produce for this growing season, which began in March. Agricultural extension workers and volunteers from urban areas are also assisting the farmers with awareness programs about how to adapt to climate change during the farming season.

"Now we cultivate what we eat here," says Ancha, who lives with his wife and five children at the camp, about two hours by road from Guma, his home community. But he looks forward to the day when he can return to his ancestral home, where he had lived all his life until the attack. "If this continues, we will remain here," he says of the attacks, "but if it stops, then we can go home and start all over again. Everyone here wants to go home."