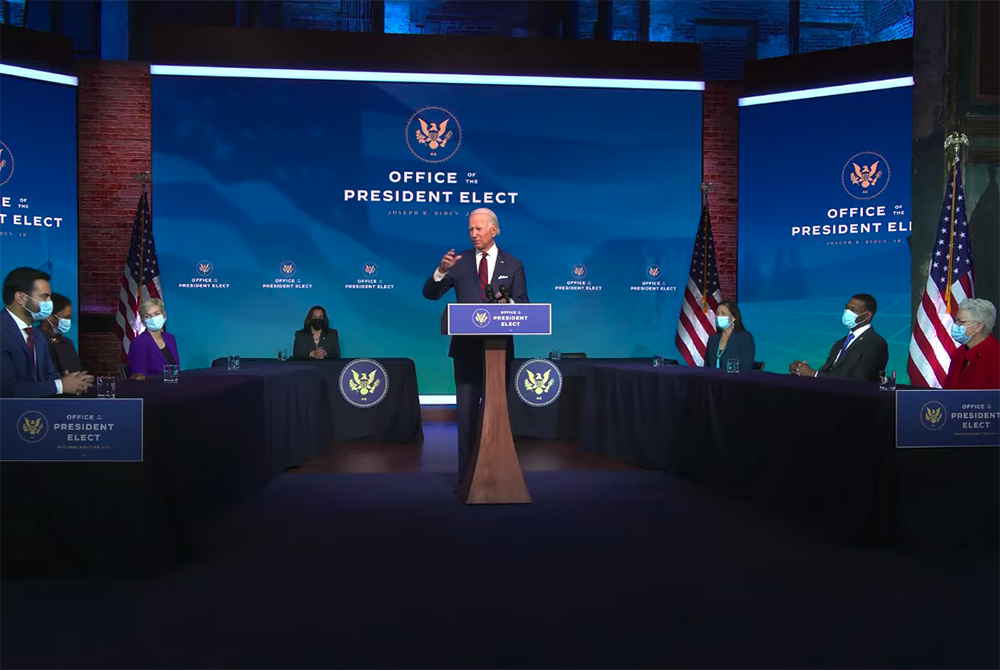 Once Joe Biden takes the oath of office Jan. 20 as the 46th president of the United States, the hard work of enacting his bold climate agenda will begin in earnest.

To aid in that massive task, Biden has assembled a Cabinet, perhaps the most diverse in U.S. history, that has embedded backgrounds in environmental issues throughout its ranks.

Faith-based organizations that have worked with several of the Cabinet selections say these prior records raise optimism that environmental and climate justice will not be limited to a handful of departments, and that the federal response to climate change under the Biden administration might ultimately match the severity of the crisis.

Biden, who will be the nation's second Catholic president, has named climate change among the four crises he aims to address in the next four years, along with racial justice and the coronavirus pandemic and related economic collapse.

"Just like we need a unified national response to COVID-19, we need a unified national response to climate change," Biden said in a Dec. 19 speech in which he unveiled his climate team appointees. "We need to meet this moment with the urgency it demands, as we would during any national emergency. And from the crisis, we need to seize the opportunity to build back better than we were before."

In what some have called the most progressive climate plan put forth by an incoming president, Biden has proposed spending $2 trillion and creating millions of new union jobs to pivot the country to clean energy and net-zero carbon emissions no later than 2050. The target for achieving net-zero emissions in the nation's electric grid is 2035. 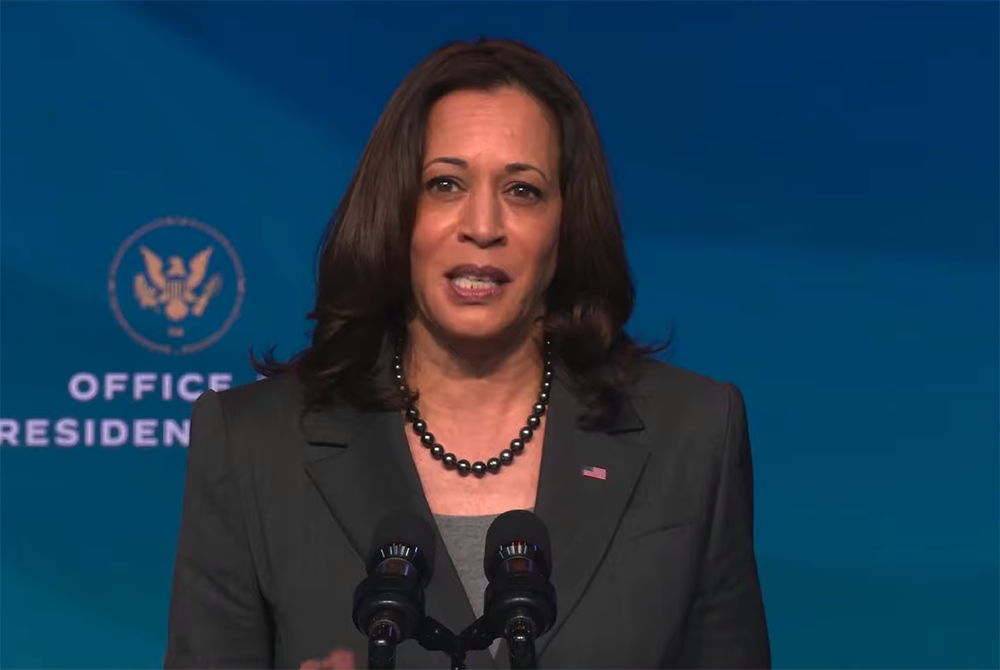 "Humanity still has the ability to work together in building our common home," said Vice President-elect Kamala Harris, quoting Pope Francis' 2015 encyclical "Laudato Si', on Care for Our Common Home."

With Democrats set to hold a slim majority in the U.S. Senate, the prospect of passing climate legislation has increased, though unless Democrats end the filibuster, those bills will still require bipartisan support. In lieu of legislative action, the incoming president will have to rely on executive action and his Cabinet.

Through his selections — whose confirmations by the Senate may be delayed by the impeachment trial of outgoing President Donald Trump — Biden has tapped officials with strong climate and environment backgrounds, and not just for the typical environmentally focused posts.

For instance, he named Xavier Becerra, who as California attorney general led lawsuits against Trump's environmental rollbacks, to head the Department of Health and Human Services. And at Treasury, Biden appointed Janet Yellen, a former Federal Reserve chair who supports addressing climate change and has advocated for a carbon tax.

Such an all-hands-on-deck approach was recommended by the Climate 21 Project, which produced a series of memos with input from more than 150 experts on how the next president can implement a whole-of-government response to climate change beginning on Day One. 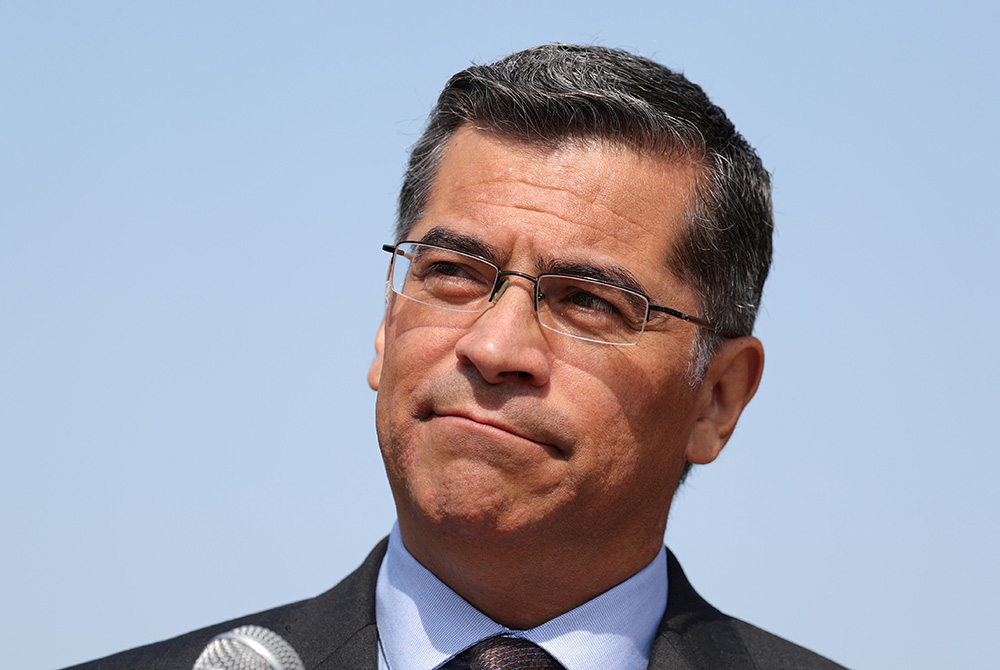 California Attorney General Xavier Becerra is seen in this 2018 file photo. He is President-elect Joe Biden's nominee to head the U.S. Department of Health and Human Services. (CNS/Lucy Nicholson, Reuters)

"I really feel this is a good way to go," Brown said.

The Climate 21 Project put forward recommendations for 11 federal departments and offices, including the Justice Department, State Department, the Office of Management and Budget and U.S. Environmental Protection Agency.

To lead the EPA, Biden nominated Michael Regan, current secretary for North Carolina's Department of Environmental Quality. He would be the first Black man to lead the agency that has regulating authority over greenhouse gas emissions, air and water pollution, and toxic sites.

Environmental groups like the Sierra Club and 350.org applauded Regan's selection, as did the National Black Environmental Justice Network, whose executive committee said in a statement that naming the former EPA official "shows that the commitment to environmental justice as a cornerstone of President 'Biden's Build Back Better' plan is firm."

In introducing his climate team, Biden said Regan "shares my belief in forging consensus and finding common purpose." In North Carolina, building consensus between a Democratic governor and Republican-controlled General Assembly was a central part of the job, said Susannah Tuttle, director of North Carolina Interfaith Power & Light, who has worked with Regan since his time as southeast regional director of the Environmental Defense Fund.

That background, as well as his North Carolina experience in rebuilding environmental protections undone by previous administrations, should serve Regan well in Washington, she said. As the Tar Heel State's top environmental official, he established the state's first environmental justice advisory board, which played a critical role in the settlement he oversaw last year with Duke Energy for the nation's largest coal ash cleanup. 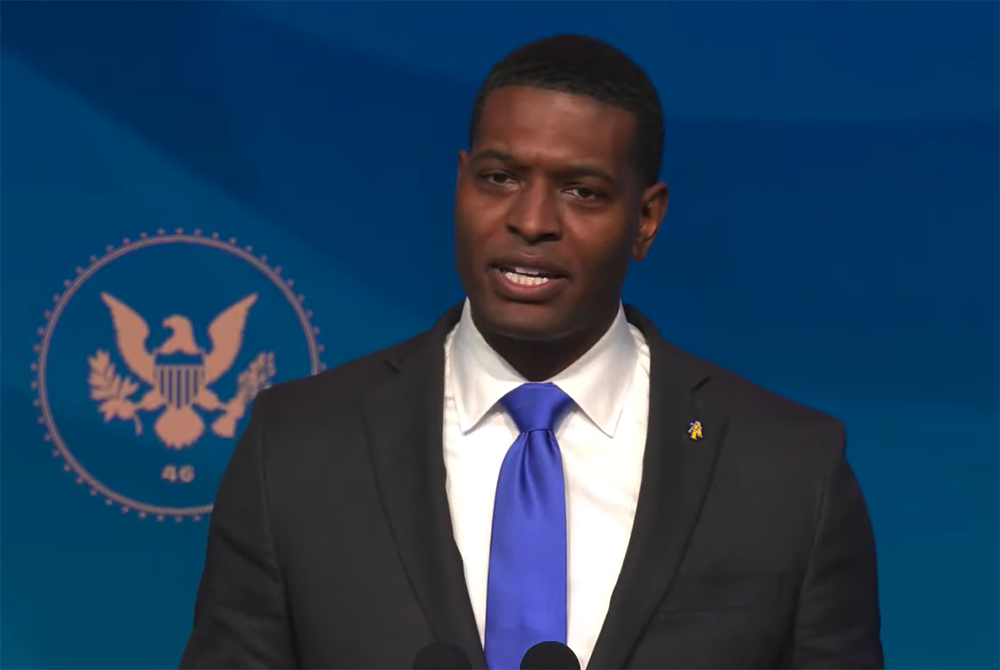 As North Carolina Interfaith Power & Light worked to block the natural gas-transporting Atlantic Coast Pipeline, Tuttle convened a meeting between Regan and community members concerned about the project. In July 2020, developers announced they were canceling the project.

Tuttle called Regan "a devout man of faith" and said that despite some questions about whether he would prioritize environmental justice, his roots in eastern North Carolina make him acutely conscious of the injustices facing frontline communities and communities of color.

"He's very familiar with the landscape, literally and figuratively," she said.

Personal experiences are likely to play a guiding role for the incoming Interior Department secretary. Deb Haaland, a House representative from New Mexico, would become the first Native American in a Cabinet position and the first to lead the federal office that oversees the nation's public lands and plays a leading role in the federal government's relationship with Indigenous tribes.

The selection of Haaland, a member of the Laguna Pueblo, was celebrated by many environmental groups and especially by Native Americans. In a statement, the Pueblo Action Alliance said Haaland will bring a unique understanding of the cultural importance of protecting ancestral lands, and her nomination provides "the sovereign tribal nations a chance to be an integral voice when it comes to how our lands and waters are managed." The tribe's lands, outside Albuquerque, are home to the world's largest open-pit uranium mine. 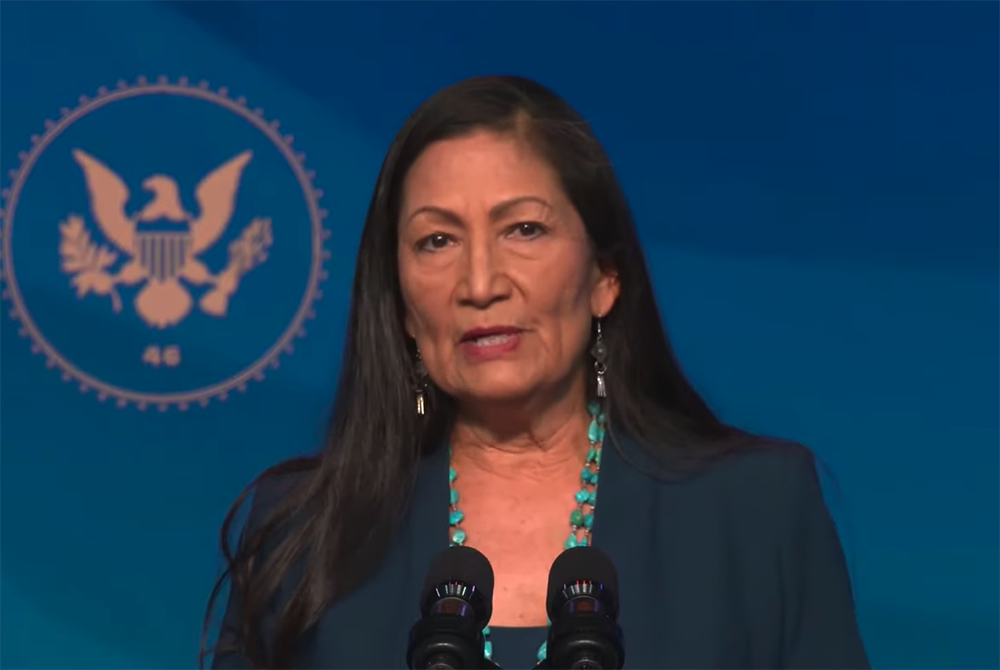 Brown told EarthBeat she was "very pleased" with Haaland's nomination and believes she'll bring a spiritual element to land-use decisions. Since joining Congress in 2018, Haaland has met numerous times with New Mexico Interfaith Power & Light, including attending a Way of the Cross event. She has discussed with the faith-based environmental group her support of the Green New Deal and the "30x30" goal of conserving 30% of U.S. lands and waters by 2030.

Other Cabinet picks also have experience with climate and environmental justice.

As California's attorney general, Becerra established an environmental justice division within his office. That department has become an important intermediary for the Environmental Justice Project of the Diocese of Stockton's Catholic Charities and the communities where it works. Jonathan Pruitt, a program manager, said the division has helped residents raise concerns about pollution and health issues related to new development projects — particularly warehouses of companies like Amazon and Wayfair — as cities and counties attempt to fast-track them during the pandemic.

"He's really changed his team's environment to be there for the people, to really listen and then also to provide strategies," Pruitt said. At Health and Human Services, he added, Becerra will be able to help connect environmental justice issues across departments at the highest level of government.

Another returning Obama administration official is Tom Vilsack, who is set to return to the Department of Agriculture he led throughout Barack Obama's time in office.

During the campaign, Biden, Harris and Vilsack each visited the farm of Matt Russell, director of Iowa Interfaith Power & Light, where they discussed how farmers can help solve the climate crisis. Russell said the Biden administration "appears to be serious about doing both the political work and policy development to empower Americans to take climate action."

Russell has known Vilsack, a former Iowa governor, for more than two decades, and the two Catholics have worshipped together. But enacting Biden's progressive environmental agenda will take more than a "reboot" of Vilsack's prior tenure at Agriculture under Obama, he told EarthBeat. 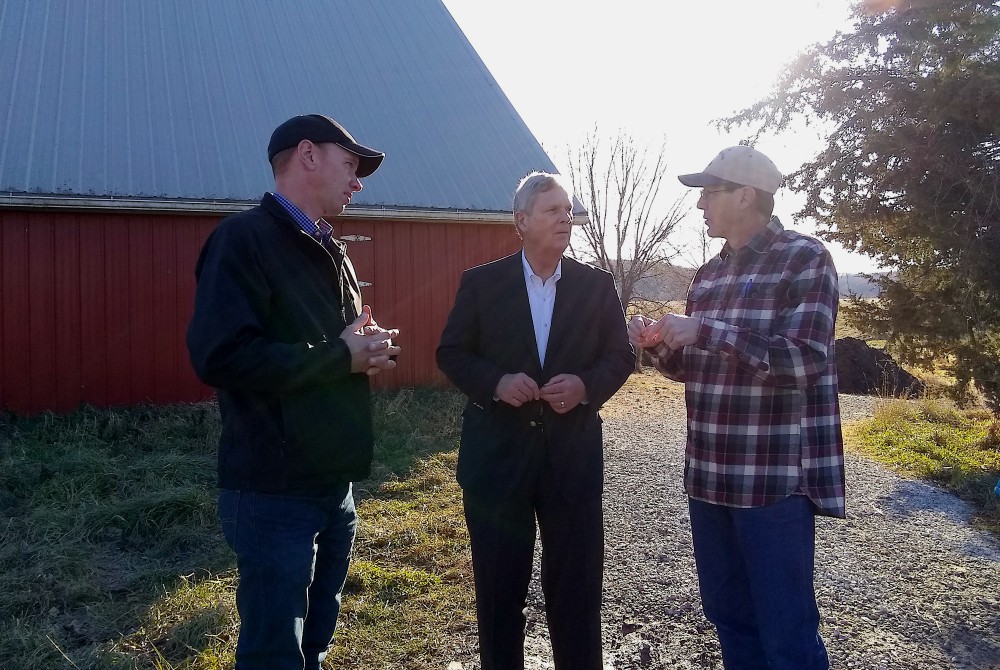 At the time, the department was seen as too close to "Big Ag" and criticized for doing little for small and minority farmers. Russell said Vilsack must bring communities of color and other groups that historically have experienced discrimination to the table to provide new leadership and develop new proposals.

"We’re going to need to help Vilsack move the Biden-Harris agenda from and through rural America," he said.

The National Black Environmental Justice Network said Biden's appointees are cause for "hopeful optimism," though it stressed that the emphasis on diversity cannot stop with leadership, but needs to extend throughout the staffs.

"The opportunity to forge a political path forward that is transformative will only come about if there is a bold plan and bold leadership that is connected to the vision of equity and justice for everyone," the network's statement said.