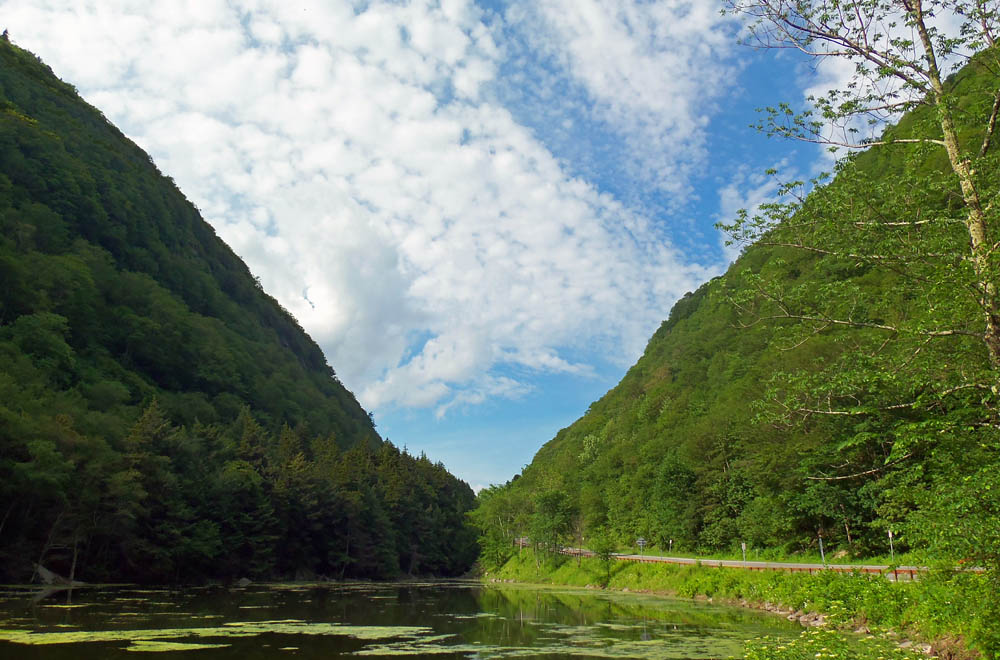 I always thought cloves were something you put in spice cake. Or maybe used to mull cider.  While indeed a spice, cloves are also a special word for a special kind of mountain pass.

While driving through the Catskill Mountains in early July, I entered two cloves. A clove is a pass through large mountains, the place where walking people used to walk and driving people now drive. New York's Route 145 from Tannersville to Phoenicia connects two mountains through a clove.

I grew up with a grandfather who was a rural mail carrier in the Catskills Mountains. Whenever it snowed and I got a snow day, I was delegated to drive with him to deliver the mail. We delivered it during "rain, sleet or snow."

We often started our day in Tannersville and went down through Phoenicia. In the afternoon we delivered to the no-longer-existing Ashokan Reservoir towns; they were submerged when the reservoir grew. We would arrive home around 3 p.m. My maternal Grandpa Waterman didn’t say much but he did stop to smoke a cigar when we had our bag lunches.

I should say a quick word about the reservoir. It delivers the water to New York City — and I love its taste. I actually think, romantically if not scientifically, that New York City water is the best in the world. Attachment to place is like that. It doesn’t need science.

The story of origin in my family is also likely fictional. It is said that we "Osterhoudts" on my father’s side stole a horse in Tannersville and had to move down the road to Kingston. My father’s mother Lena remained a gambler all her life and made her living on the road, gambling for money.

My mother's mother Ella was a different sort. She read devotionals every day, went to church as often as possible and was usually constipated and "blue" much of the time. She did not like that story about her daughter’s husband. She feared it was true but she wanted to imagine that she came from a different and better place. She fashioned herself one of those good immigrants who should be allowed into the country. Lena, on the other hand, knew she was undeserving.

Often on the weekends Ella would talk Jack Waterman (my grandpa) into taking her for a drive. I don’t know why he’d want to drive a seventh day in the week but he often complied. Thus we would bundle up into his car, the one used for the mail, and head to Haverstraw. I didn’t know at the time there were cloves there. But there were.

Cloves spiced up the travel. They were the smart ways people traveled. They made the passage easy.

The word "clove" itself has a fascinating origin with deep Dutch roots. That etymology helps explain how cloves became part of the vernacular of the landscape in this part of New York.

While I was growing up in Kingston in the 1950s, a new bridge, the Kingston-Rhinecliff Bridge, was built across the Hudson River. It was the only thing anyone in my large extended family ever talked about. Over and over, and then over and over again, they said, "It will change everything." And it did.

The places we inhabit habituate us. They give us habits of going out and coming in. They make passage easy.

The more we know the roads, the more we love them.