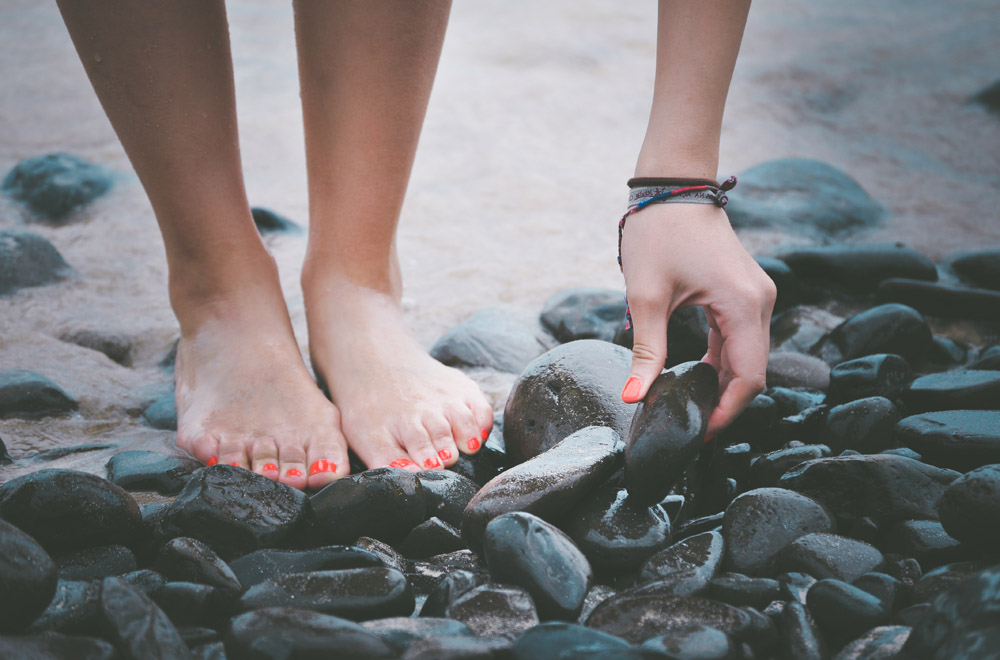 Have you ever wondered about the proliferation of nail salons? There is one in every small town, dozens in every city and here in New York City, seemingly one every two blocks.

Why do humans enjoy ornamentation of their nails? Why are there so many colors? Are all those chemicals really useful?

In my congregation at Judson Memorial Church, some of the young men paint their nails with the same vigor as the women. While you can still find a female or two with natural nails on her hands and feet, more likely at least the feet are going to be colorful.

Yellows are in; blues too. Red is just one color along rows of different colors, likewise with pink, in the nail salons.

I once had a powerful experience while having my nails done. I decided I didn’t like a woman, often Asian, bending down in front of me. (I am Euro-American.) So I learned to paint my own nails. As I reflected more on that experience, I kept thinking of the foot-washing ceremonies many of us conduct during Lent. There is clearly a lot going on in the pedicure and ornamentation experience.

Books abound on beauty in nature, which obviously includes beauty on the body.

In his book The Evolution of Beauty: How Darwin's Forgotten Theory of Mate Choice Shapes the Animal World — and Us, Richard O. Prum, a professor or ornithology at Yale, argues that evolution is at the heart of ornamentation in animals. We ornament ourselves to attract mates.

Apparently Darwin had a mixed attitude towards ornamentation. He actually thought that some beauty was harmful to the continuity of the species — he picked out the feathers in a peacock's tail as particularly maladaptive. He thought there was a lot of useless beauty in the animal world and was uncomfortable with it.

So, what about painted nails on the human? Is this beauty useless or useful?

I often see older men in nail salons having their nails clipped. Why? Because they can no longer bend down to do it themselves.

Aging itself is likely maladaptive to a strict Darwinian. Once a man or woman can no longer breed, doesn’t their hanging around eating food and breathing air conflict with strict evolution? From that perspective, you could argue that older people, like me, are "uselessly" beautiful as well. One of the most often repeated statements among us elders is "I just don’t want to be a burden on my family." Clearly, the elder himself or herself is aware of evolution and its commandments to the species.

I lived near four adolescent ospreys on the beach for two weeks this summer. They held a kind of dominion over the marshes. They flew in circles at the edge of the bay too, back through the emerald green of the marsh (what a great color for nails) and then repeated their flight pattern.  Their parents were around as well.

When viewed from below, the birds displayed a black-and-white striation mixed with their adolescent grayness. That mixture of colors would do well in a high-end boutique or hotel lobby.  I wasn’t surprised to see that one of the wineries on the east end of Long Island (where we were) had named itself "Osprey Dominion." The sign is in the bird’s beautiful colors and even mimics its pattern a little.

Wine might also be one of those beautifully useless things. Obviously, we could live without it but who would want to?

You may be thinking I have set up a strange and useless problem, that of the utility of beauty and evolution’s own oppressive utility. Reproduce, it says. Carry on. Make babies. Survive. To me, it all sounds a little Stalinesque without painted nails or wines or peacock feathers in a jar on top of your desk.

My grandfather used to suck the egg out of egg shells and then paint the eggs. He was an egg artist. And he died long before he became a burden on his family.

There are plenty of burdens in life — great necessities to produce and to reproduce. Why not add a little beauty to the mix?

Beauty is not a burden, as any peacock, fully displayed, will tell you.