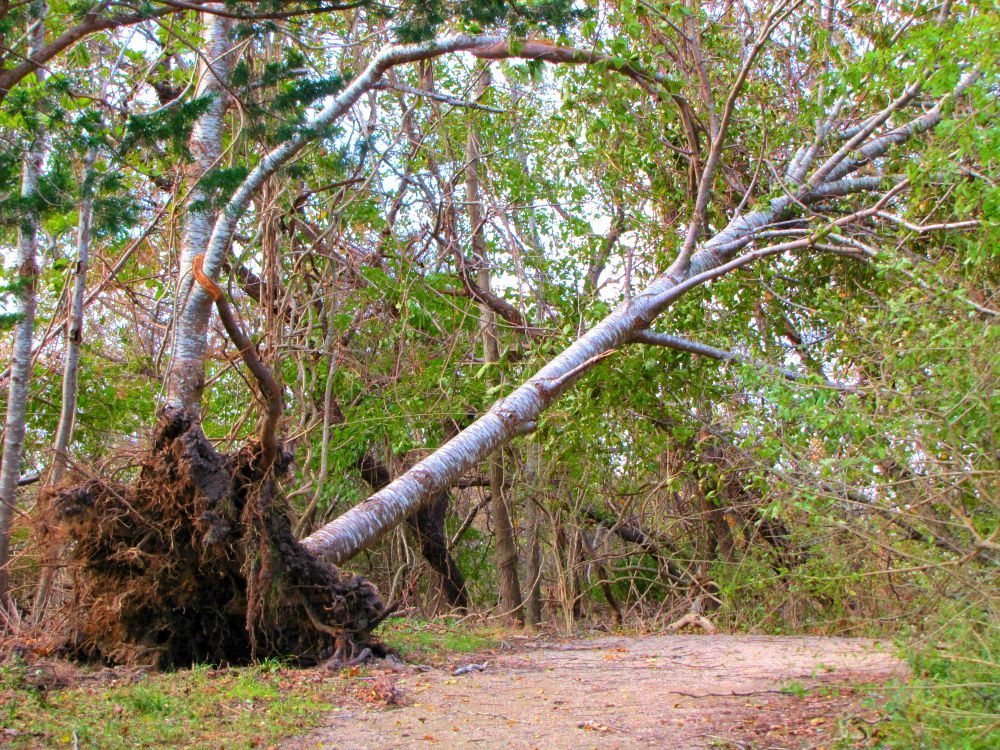 I live in New York City nine months of the year but spend the summer in Hopewell Junction, fewer than 100 miles to the north.

On May 15, Hopewell experienced a microburst — which is, as the National Weather Service describes, an intense, localized column of sinking air within a thunderstorm that can cause extensive damage. The previous weekend, I had gone up to Hopewell to plant the garden, harvest the lilacs and enjoy early spring from an upstate state of mind.

The microburst, which contained three tornados, had uprooted the two largest trees on our property, both over 75 years old.

The two huge trees were blown out by the root ball, while 21 others also went down. We also lost a lilac bush. Part of the roof on the 279-year-old house was taken out, and the path to the chicken coop was destroyed, as was the chicken coop fence.

Compared to Hurricanes Katrina or Irma or Sandy, these damages were minimal. I have some insurance that has covered some of the damage.

My dog had been alone in the house, as the caretaker was out. She called the next morning to tell us that the power was out. (It remained out for six days.) She brought our dog and herself back to the city — and in an act of stewardship also brought the contents of our freezer with her. In the freezer were dozens of bags of wild mushrooms, the bounty of many walks on the paths through the woods, now strewn with trees uncountable.

Haven't I seen what happened in Puerto Rico? Was I not in New Orleans after Hurricane Katrina? How important are a few wild mushrooms or a chicken coop?

The chickens weren't even up yet as they were still over-wintering in their winter home. Imagine, I keep imagining, way too repetitively, if the birds had been there. By the time I got up to review the damage, they would all have been living in Poughkeepsie. Then again, since the roads were closed for six days, they would not have met the usual fate for chickens crossing the road.

Why was I so worried about a couple of people and their freezer full of mushrooms?

It made me think of the World Central Kitchen that chef José Andres set up after the 2010 earthquake in Haiti that has since fed thousands of people impacted by natural disasters. Arriving days after Hurricane Maria hit Puerto Rico, the D.C.-based non-profit and its many volunteers have since served more than 3.4 million meals to people across the island. They are now hard at work in Guatemala in the aftermath of the eruption of Fuego Volcano.

My small question is one so clearly dwarfed by Puerto Rico and more. But why am I having a mild breakdown over the loss of 23 trees?

One is that there is nothing like direct experience of climate change to get your attention. The May weather was not only extremely damaging to strong trees, it was out of season.

Secondly, I am a little neurotic in the first place. I worry the weather and have always worried the weather. People call me a weather nerd … and they aren't being flattering. Whenever I asked my mother if we could have a picnic, when I was truly a child instead of untruly an adult, she would answer, "Let's wait and see. It will depend on the weather."

Third, I love trees. I especially loved the one big maple tree, with gorgeous red and yellow leaves, that went down. It anchored the center of our property.

In the winter, it was bare boned and wafting. The snow touched it with an artistic grace. In the fall, it had colors that made tropical birds weep. In the spring, it had baby buds that got the bird's attention; it held our best bird feeder and the finches gave the light green of the spring bud a contrasting yellow that caused New York designers to ache. And in the summer, its deep healthy green was a place of shade. My best cat is buried in that shade. (I never liked the other big fir tree that much, so I have little grief for it.)

I don't claim a better crisis with these multiple downfalls. I am not in competition with people who still don't have electricity. I can't find a way to privilege my grief. But my grief is real.

I am sure eventually I will see that the property is "improved" by this loss as all my well-meaning friends and family keep saying, "Look, at least you will have more sun."

I did experience some solace by reading about "the secret lives of trees" and how they are alive and communicate with each other and with the land around them. I didn't feel quite as neurotic. I always thought my big tree was communicating to me regularly, almost every day I was on the land.

For now, you can send a sympathy card or refer me to a good "nature" grief group or wait with me for the next storm. After the next storm, we'll set up a kitchen and cook up some saved mushrooms. Between now and then, I will remain a doing-good-better activist.

And I will memorialize that tree I still love.