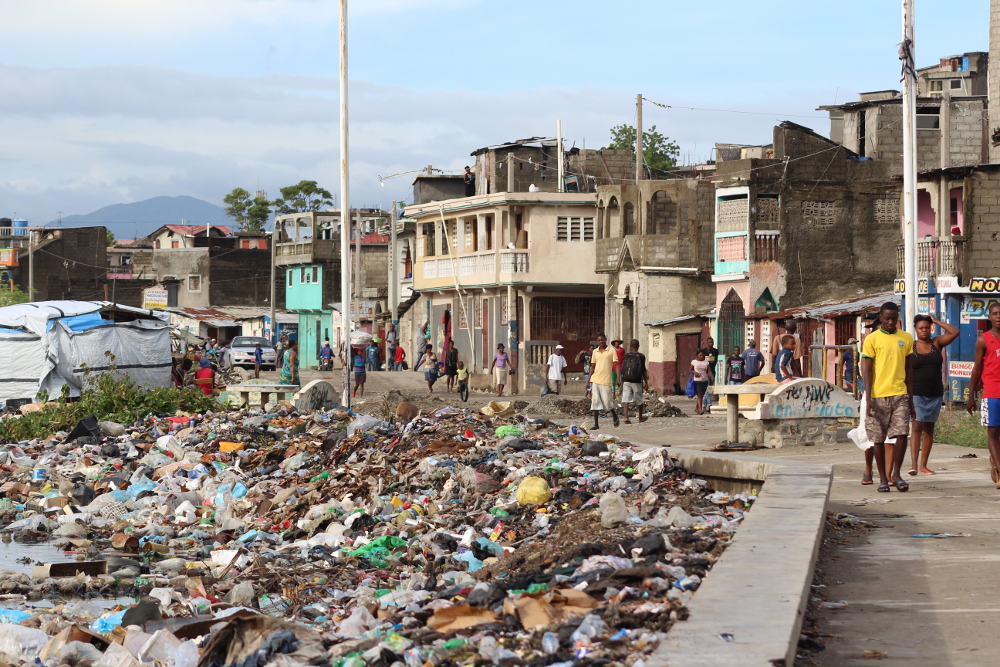 On coastal areas near the capital of Port-au-Prince and in other cities in Haiti, trash is strewn on the streets and on canals. (GSR photo/Chris Herlinger)

It is never difficult to spot Haiti's environmental vulnerabilities — they are linked to every other problem in the country.

On coastal areas both near the capital of Port-au-Prince and in other cities like Cap-Haïtien, on Haiti's northern tip, trash is strewn on the streets and on canals, sometimes building up so thickly that causeways of refuse are used to cross over a waterway.

Last September, not far from a trash-littered river that snakes through a coastal area of Cap-Haïtien called Nan Bannann, I spoke to local residents there about environmental threats that encompass not only the worries about polluted waters, but also of coastal flooding from hurricanes.

Gray clouds emanating from Hurricane Maria looked threatening, and residents like Farah Jasmin said there is little they can do when floods threaten except evacuate elsewhere and wait it out.

"From September through December, people are worried," Jasmin said of the most critical months of Haiti's yearly hurricane season. "We're the most vulnerable because we live by the sea."

Luckily, Maria just brushed northern Haiti. But residents say local authorities have not paid sufficient attention to the area's problems, like the rubbish-filled coastal areas. They would like to see the area cleaned up, but it's a task they can't do by themselves. Nor do they feel they can move elsewhere permanently. "We don't have the money," Jasmin said. "We suffer."

Such sentiments don't surprise Michel Edouard Alcimé, deputy director for Jesuit Refugee Service in Ouanaminthe, a city located on the border of Haiti and the Dominican Republic, and about 40 miles west of Cap-Haïtien.

Alcimé's primary job is focused on the flow of migrants along the border, but it is impossible not to see how major social problems in Haiti are all related to each other and, in the end, tied to poverty, he said. "Everything is linked to the economy."

"Look at the problem of the environment," he told me in an interview. One of the most common symbols of Haiti's environment woes is deforestation, something seen everywhere, from the mountains near Cap-Haïtien down through to other mountainous areas near the southern coastal city of Jacmel.

On either stretch, you will see the effects of deforestation — trees cut to their roots because people use the wood for charcoal as an inexpensive way to cook. 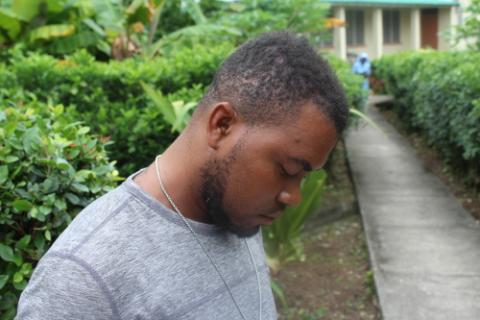 Alcimé recalled seeing a family he knows cut down a fine, healthy, fruit-giving mango tree on their property. The family told Alcimé, "We know that every year this tree gives us mangos. But we had to do it for the charcoal."

The need for charcoal stems from a need for cheap fuel and energy. But the result of trees being cut down en masse and exposing hillsides makes already impoverished areas more vulnerable to mudslides during heavy rains and to winds caused by storms.

A more robust government could do more to enact environmentally friendly legislation and regulations, Alcimé said. But that would be a massive undertaking in a country where there is essentially "no control" when it comes to the environment, he said.

"It's not just 'conscientization' " — becoming aware of and acting on social problems, he said. It's also about applying rules. And, of course, "to improve the situation of the people everywhere."

That is not easy. Before visiting Cap-Haitian, I visited the city of Les Cayes, along Haiti's southern coast. The city and the surrounding area were badly affected by Hurricane Matthew in 2016. 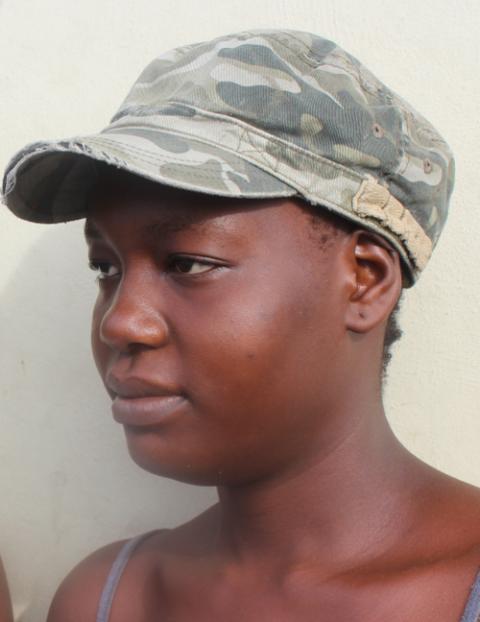 While the city's cleanup and rebuilding had patched up visible scars, many challenges still remain and problems are all interrelated, as I found out in talking to Boyer Jean Odlin, 28, a young professional who once worked an administrative job in Les Cayes. Out of work since Matthew hit Les Cayes, he said food was scarce after the hurricane and remains so for many people still struggling with the hurricane's aftereffects.

"We are Haitians. Sometimes we go without food for two days or more," he said. People get by, he said, from loans from friends and family and by doing day-labor jobs, which is Odlin's means of support right now, he told me.

Odlin believes governmental bodies did not carry their weight in emergency and subsequent reconstruction efforts. His residence was flooded during the hurricane and he lost everything — computer, food, clothing — and noted there is no government assistance for survivors like him.

Nor does he see any long-term effort to address issues like environmental vulnerabilities.

If there were more commitment on the environment from a stronger government, he said, life might be better for Haitians like him. There has to be a way to build better houses, make coastal areas less vulnerable to natural disasters and take more of a role in creating jobs. "The government is responsible in a way," he said.

It may be, but the government is neglecting basic infrastructure, as I found out at the end of my assignment.

Chris Bessey, the Haiti country representative for Catholic Relief Services, said that since the "Haitian people face many challenges, from natural disasters to the daily struggles of making ends meet … environmental issues such as deforestation, soil degradation and shifting climate patterns only exacerbate these challenges." 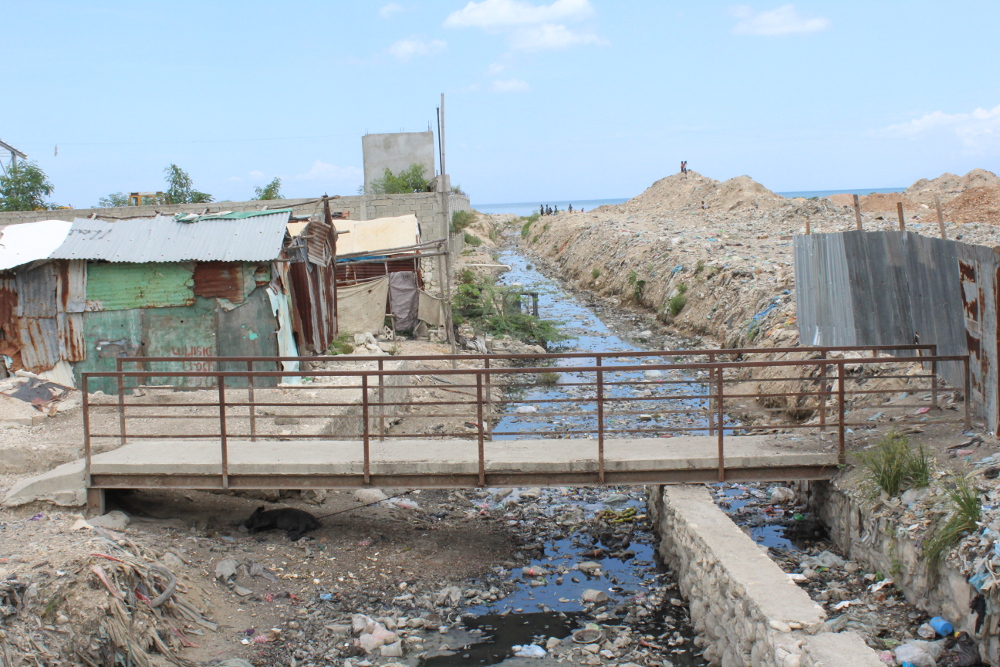 "We are Haitians. Sometimes we go without food for two days or more."

"We are all seeing how natural disasters are increasing in intensity as well as the devastating effects on people in their paths, " Bessey told NCR. "Communities in Haiti, especially farmers, are trying their best to adjust accordingly, but more is needed."

Leaving Cap-Haïtien for Port-au-Prince — normally a six-hour trip on road — I and colleagues and a driver from Catholic Relief Services discovered a set of challenges: A truck accident blocked the most accessible road back to the capital, and other motorists told us it could take a full day to respond to the accident and remove the truck from the mountainous roadway. So, we had to turn around, retrace our steps back to Cap-Haïtien and then take another route.

Along the way, we had to cross numerous rivers with no bridges. But then we got stalled for nearly two hours near Ennery, in the western department, or province, of Artibonite, awaiting a damaged truck blocking passage across one river to be overturned and then moved.

Up to that point, we had avoided rain. But just as we left the area, we ran into about 20 minutes of severe downpours that might have been related to the effects of Hurricane Maria. In all, it took us 12 hours to return to Port-au-Prince.

All of this pointed to Haiti's vulnerabilities — many grounded in Haiti's uneasy relationship to the environment.

Is there hope? One person who believes so is Sr. Bernadette D'Souza, an Indian member of the Society of the Daughters of the Heart of Mary I met in Haiti two years ago. She is concerned about environmental issues partly because of her previous mission work in Rwanda, a country committed to a clean environment.

As a relative newcomer to Haiti, D'Souza acknowledged in an email that among the first things an outsider to Haiti will notice are "empty plastic bottles thrown anywhere and as a result drains clogged and water stagnates in certain places especially when it rains."

But efforts of various kinds are being made, she said, including efforts to recycle waste and reduce the use of plastic bottles. One manufacturer is now making stoves that use fuel from sugarcane waste rather than charcoal. 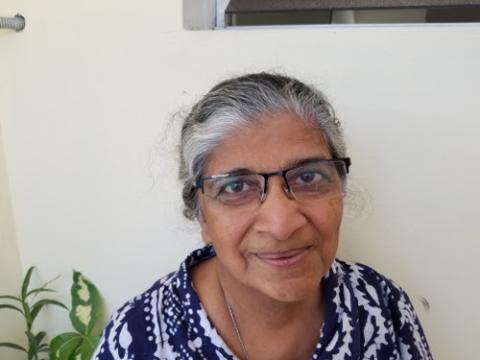 A group of Franciscans, D'Souza said, has initiated a project "to construct a plant that manufactures bricks, sheets for roofing, vases for plants from plastic and paper waste." That project still faces hurdles, she said, including finding land to construct a plant "that is not harmful to the population."

"There is still a long way to go in Haiti but I feel small steps are being taken," D'Souza said. "Education has a big role to play in the process of systemic change. I have seen in certain places billboards that say in [Haitian Creole] 'Haiti en wout de changmans' — Haiti is on the way of change. So we can hope for the best and wait for the day to see this country totally transformed."

"In the meantime," D'Souza said, "I will try to be the change that I want to see in Haiti."

[Chris Herlinger is international correspondent for Global Sisters Report. Translation assistance was provided in Ouanaminthe by Harry Voltaire and in Les Cayes by Ulrick Louijeune.]

A version of this story appeared in the April 6-19, 2018 print issue under the headline: Haiti's environmental woes.