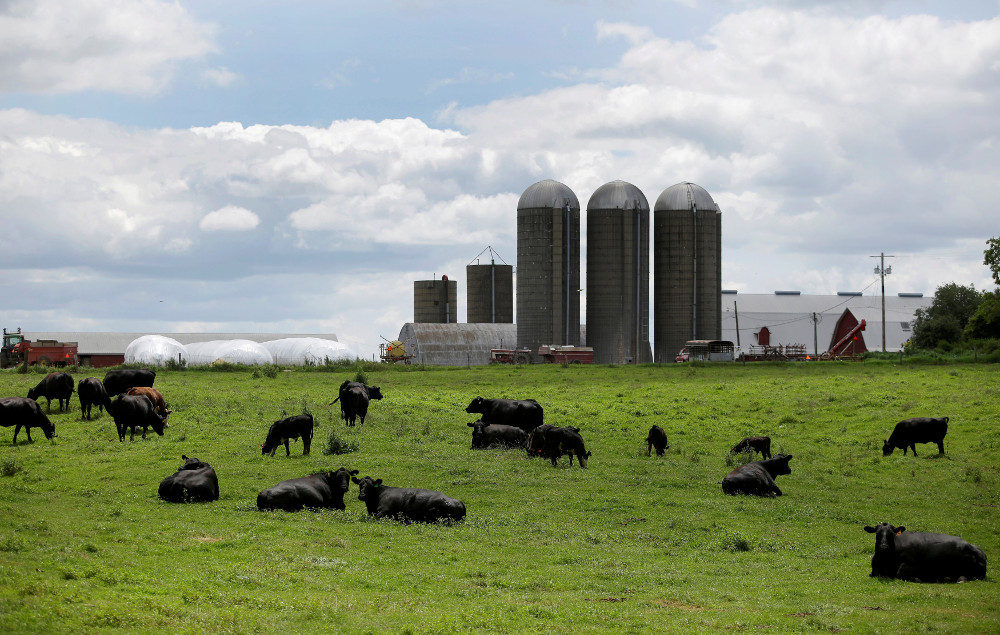 Cattle rest in a field outside a farm in late July in Peosta, Iowa. Congress has passed an $867 billion farm bill with strong bipartisan support and President Donald Trump is expected to sign it into law soon. (CNS/Joshua Lott, Reuters)

The farm bill that passed both houses of Congress by wide margins doesn't have money in it to protect endangered species, but it did preserve one that had been on the threatened list: bipartisanship.

"We were so excited that the Senate acted like grown-ups," said Sr. Simone Campbell, executive director of Network, a Catholic social justice lobby.

"They actually did governance, and they had hearings, and Sen. (Pat) Roberts (a Republican) from Kansas: I rarely agree with him on anything, so this was an amazing project he led, focused on the needs of the people involved," Campbell said Dec. 13. "It was far beyond partisanship in actually trying to make government work."

Jim Ennis, executive director of Catholic Rural Life, was happy Congress acted relatively swiftly. This was the first time a farm bill passed without needing an extension of the expiring version since 1990, when George H.W. Bush was president.

Not all farmers will reap benefits from the farm bill. "We've got lots of folks hurting in rural communities," Ennis told CNS Dec. 14, "but you can't put everything in one bill. You just can't."

Campbell, a Sister of Social Service, gave Roberts, chairman of the Senate Agriculture Committee, credit for "listening to many of the agricultural workers in Kansas who use SNAP (the federal Supplemental Nutrition Assistance Program) in the off-season."

Farmers who hire the farmworkers, she said, "depend on their workers being able to eat," and Roberts saw this "through the eyes of the farmworkers and the farmers."

She added Roberts was "helped by the changing politics in Kansas, which has moved significantly away from the hyperpartisan, punitive approach. ... I think it was a combination of his experience, the experience of his people, and the November election."

Campbell also lauded Roberts' Democratic counterpart on the committee, Sen. Debbie Stabenow of Michigan: "She has worked hard to put together a very collaborative relationship with him, so together, they could create a bill they could be proud of."

One point of contention between the original House and Senate versions was a provision in the House bill that would have imposed stricter work requirements for SNAP eligibility, with stretches of SNAP ineligibility growing longer each time a recipient failed to report their work, or looking for work, in a timely manner. The House ultimately removed that from its version of the bill.

"We actually got most of the stuff that we wanted," Campbell told CNS in a telephone interview. While she said she sees farm subsidies as "a little excessive," the final bill "maintained pretty much the existing protections for farm runoff and the fertilizers used and that sort of thing. So I don't have complaints on that side. Certainly, after what we were facing in the House, I'm certainly not complaining about the nutritional title.

"It's a rare day for me to not complain about something."

"They decided we can't keep doing that to our farmers," Ennis said of the extensions lawmakers passed in all the previous farm bills over close to the last 30 years.

"It helps, too, that the (Republican-led) House felt under pressure due to the change in leadership (in January)," he told CNS. "They have the control now, but in the future, they would be losing control. So they made some concessions, but passed something they can live with."

Having a farm bill in place, he added, gives farmers "stability for planning for next year."

Dairy farmers, while they will see gradual opening of Canadian markets as sources for their goods under this bill, would be one focus of a future bill should one be submitted, Ennis said.

"There are a lot of dairy farmers hurting right now because of low prices," he added. "It's just very difficult to find markets that will pay a reasonable price."

Ennis said the future of family farms, with a focus on dairy farmers, will be the main topic in a future issue of Catholic Rural Life's quarterly magazine.

In a Dec. 12 statement, the Rev. David Beckmann, a Lutheran minister who is president of the Christian citizen anti-hunger lobby Bread for the World, praised the bill for its inclusion of added funding for employment and training pilot projects — including funding prioritizing specific populations such as older Americans, former prison inmates, people with disabilities and families facing multigenerational poverty.

It also makes and funds a new program allowing health care providers to give prescriptions for low-income people to buy fresh fruits and vegetables.

The farm bill eliminates a requirement in the federal Food for Peace program to sell U.S. food commodities overseas to pay for life-saving food and nutrition programs; the complicated requirement had been cutting about $70 million from food aid each year. The legislation also gives the McGovern-Dole Food for Education program more flexibility to purchase from local farmers and markets, which will improve the nutritional quality of the food for preschool and school feeding programs in foreign countries.

The farm bill, Beckmann said, "will be an important lifeline for millions of families experiencing hunger in both the United States and around the world."