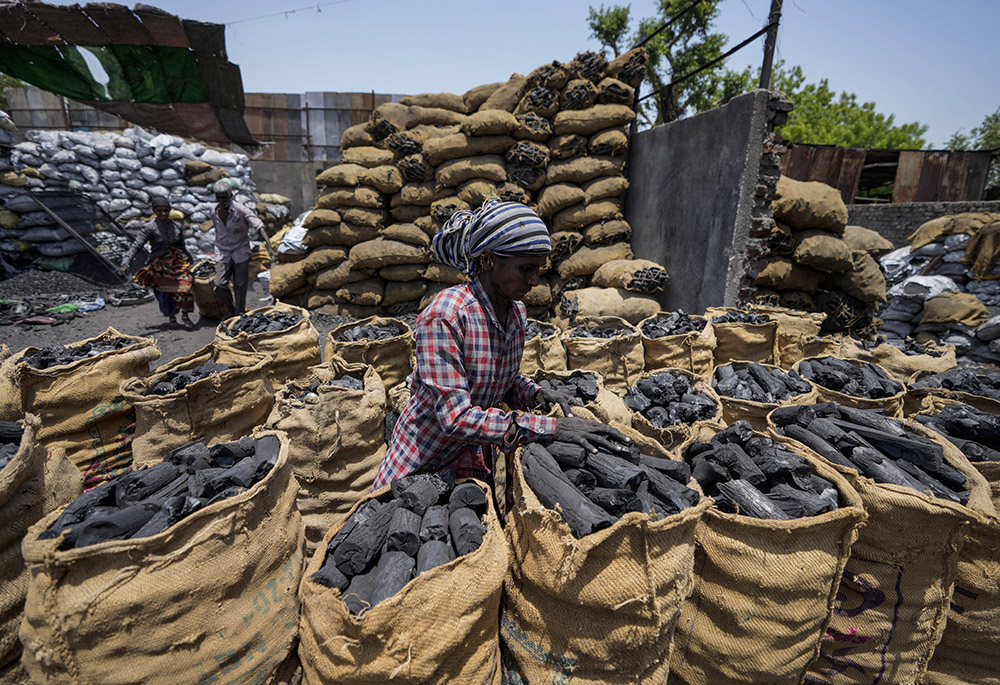 A woman works at a coal depot May 2 in Ahmedabad, India. (AP photo/Ajit Solanki, file)

As world leaders prepare for the next United Nations summit on climate change, representatives of world religions have lent support for a proposed international treaty to facilitate a fair and rapid phaseout of fossil fuels that drive global warming.

A letter issued Nov. 2 and signed by more than 50 religious institutions, representing millions of members worldwide, urges nations to develop, adopt and implement a "Fossil Fuel Non-Proliferation Treaty" that would immediately halt expansion of new fossil fuel projects, outline a road map for a fair and equitable end to existing fossil fuel production, and ensure a "just transition" to 100% renewable energy globally by providing economic and technological assistance to communities and countries who need it, particularly in the Global South.

The burning of fossil fuels, namely coal, oil and gas, is the primary driver of climate change that since the Industrial Revolution has heated the planet 1.2 degrees Celsius and is on track to push warming to 2.8 C by the end of the century, according to the latest emissions gap report from the U.N. Environment Programme. In the past decade, when attention on the impacts and threats of climate change has been at its highest, nearly 90% of global carbon emissions came from the burning of fossil fuels, according to the U.N. Intergovernmental Panel on Climate Change.

The multifaith letter comes just days before heads of state and diplomats gather in Sharm el-Sheikh, Egypt, for the start of COP27, the 27th U.N. climate change conference (Nov. 6–18).

"The science surrounding the most urgent danger facing humanity is undeniable: to be good caretakers of our common home, we must act and phase out the production of fossil fuels," the faith letter stated.

The religious leaders said that "too many" coal mines and oil and gas wells are under production and will lead to global temperatures blowing past the 1.5 C target within the Paris Agreement. They argue that a fossil fuel treaty is necessary due to the "painstakingly slow" responses to date by governments to keep climate change in check, fossil fuel companies further hindering efforts, and the "glaring disconnect" between nations' long-term pledges to reach net-zero emissions and present-day expansion of new fossil fuel production. 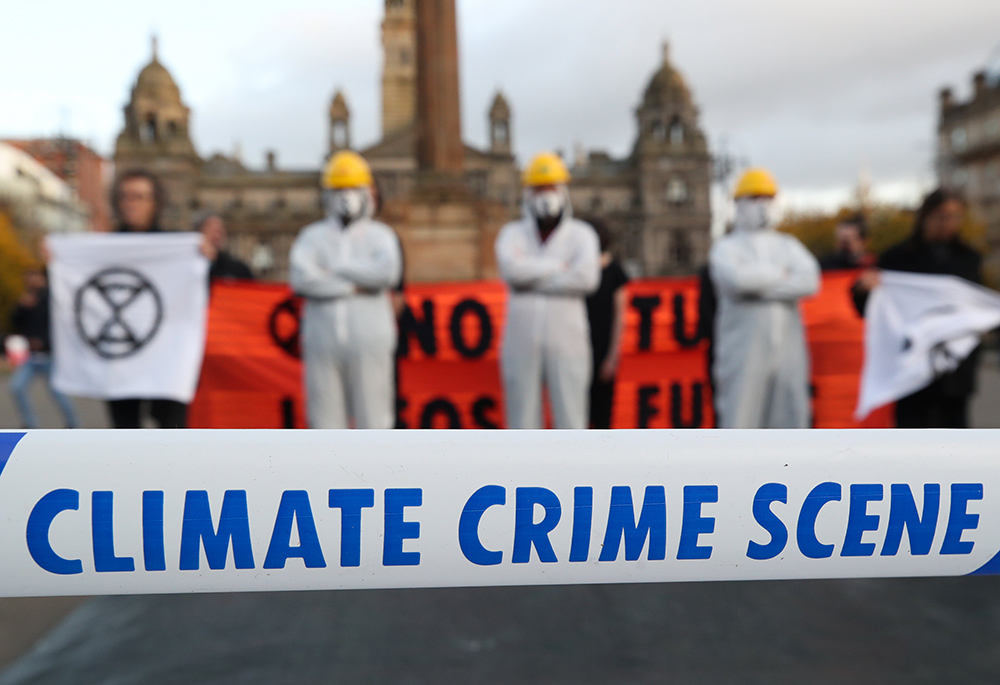 The continued extraction, refining, transport and burning of fossil fuels is not only releasing greenhouse gas emissions that are heating the planet at alarming rates, the faith leaders said, but posing serious health impacts to communities through pollution and by destroying ecosystems.

"These costs are disproportionately paid by those who are most vulnerable to, and least historically responsible for, the consequences of climate change — lives lost, homes and farms destroyed, and millions of people displaced. It is our moral imperative to protect those most in need and to uphold the human rights of future generations by employing clean and sustainable sources of energy," they wrote.

The letter is supported by two global faith-based environmental networks, GreenFaith and the Laudato Si' Movement. It will remain open to signatures until it is delivered to world leaders at COP27.

Momentum has grown this year behind a fossil fuel treaty. At the U.N. General Assembly in September, Nikenike Vurobaravu, president of the Pacific island nation of Vanuatu, became the first head of state to endorse the treaty. Others like Timor-Leste and Tuvalu have followed suit, as have 70 cities across the globe. Last month, the European Union's law-making body passed a non-binding resolution calling on its member nations to work on developing a Fossil Fuel Non-Proliferation Treaty.

The World Health Association along with nearly 200 global health associations have endorsed the treaty, as has the World Council of Churches.

At the same time, the push for a treaty to end the use of fossil fuels comes as energy concerns mount in part from the Russian invasion of Ukraine, which has led some countries to seek new sources of gas and coal as they boycott Russian energy reserves.

Treaty advocates say the war, and its impact on rising energy costs, only underscores the need for such a global deal.

Svitlanka Romanko, a climate activist who founded the Stand with Ukraine campaign urging bans of Russian fossil fuel imports and a former staffer with Laudato Si' Movement, has argued that the Paris Agreement's omission of the words "coal," "oil" and "gas" reinforces the need for a complementary mechanism to end the use of fossil fuels. The Glasgow Climate Pact reached last year at COP26 was the first time in U.N. climate negotiations that a final document directly stated the need to reduce the use of fossil fuels, though a last-minute language change shifted it from "phase out" to "phase-down."

Romanko said the faith community "can play a crucial role" in building a moral case for the treaty to end fossil fuels.

Support for such a treaty has come from inside the Vatican and other Catholic spaces. Cardinal Michael Czerny, head of the Dicastery for Promoting Integral Human Development, has called it "essential" as a complement to the Paris climate accord.

"All new exploration and production of coal, oil, and gas must immediately end, and existing production of fossil fuels must be urgently phased out," Czerny said at a July press conference on Pope Francis' Season of Creation message that addressed leaders at COP27 and the COP15 summit on biodiversity.

Among the religious groups that signed the treaty-endorsing letter were two dozen Catholic institutions, including the Latin American and Caribbean Religious Confederation (CLAR), the Pan-Amazonian Ecclesial Network (REPAM), the Amazonian Ecclesial Conference, the Churches and Mining Network and the Latin American and Caribbean Catholic Bishops Council (CELAM).

Argentine Archbishop Jorge Eduardo Lozano, CELAM general secretary, joined in urging governments to draft a Fossil Fuel Non-Proliferation Treaty, calling it "a tool that can preserve the good of our Common Home."

"Corporations, governments and financial institutions must stop initiating new oil and gas exploration, and replace fossil fuels with energy sources that are friendly to the planet and those of us who inhabit it," he said in a statement.

Representatives of Buddhism, Judaism and Islam also signed onto the multifaith letter, including Soka Gakkai, a Buddhist organization with 12 million members in 150 countries, Islamic Relief Worldwide, the Jewish climate group Dayenu, and the Church of Sweden.

"Religious communities worldwide have supported binding international agreements on nuclear weapons, debt relief, tobacco, land mines, and more," Hening Parlan, environmental head for the 30-million-member Indonesian Islamic organization Aisyiyah, the women's movement of Muhammadiyah, said in a statement. "We believe strongly in the importance of a Fossil Fuel Non-Proliferation Treaty and a just transition and we are committed to supporting it."