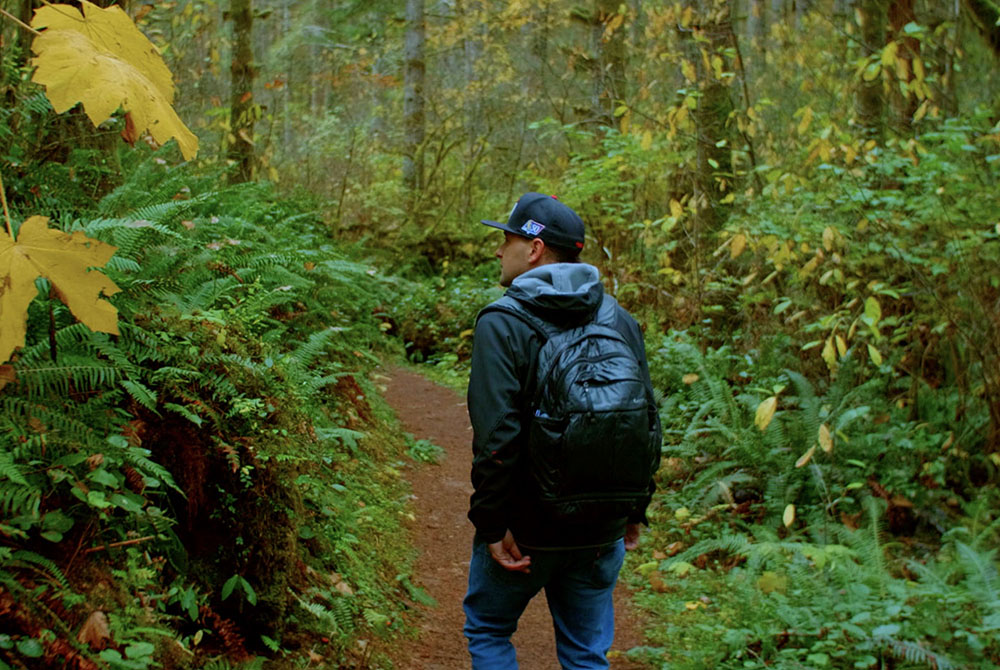 We behold a panoramic shot of the ocean, painted in a diffused monochrome blue by an overcast sky. The waves hypnotically dance to a mystical musical score. Shortly after, we are following a man as he walks deep into a lushly forested trail.

Then the image of the ocean fades back in, this time, viewed from the balcony of what appears to be a hotel room in the early evening. In the shadows, we see the silhouette of a woman walking to the railing and looking toward the horizon.

The title credits, "maɬni — towards the ocean, towards the shore," appear for a few seconds and then, in a flicker, we find ourselves underwater, moving through aquatic reeds. The ambient sound, aqueous and submerged, accompanies us, viscerally evincing a journey that is inward as it is outward. 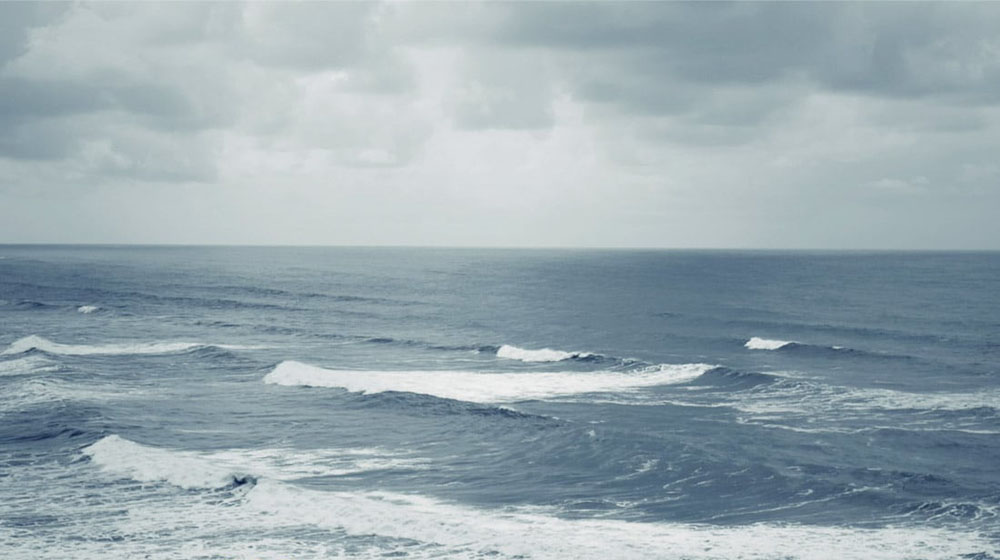 The cyclic ebb and flow of life, death and afterlife inspirit "maɬni" (pronounced "moth-nee"), the first feature-length film of Indigenous American artist and filmmaker Sky Hopinka, who is credited for direction, cinematography and editing, among others. Of Ho-Chunk and Pechanga ancestry, Hopinka is known for previous works that consisted of experimental, often biographical docu-shorts, intimately focused on Native American reflections.

He paints similar brushstrokes in "maɬni," but on a longer, 82-minute canvas, allowing him to offer spaces for meditative immersion in the waters of Chinook Indian culture and worldview.

Jordan Mercier and Sweetwater Sahme, the two people we encounter in the opening sequence, are relatively young Chinook Indians contemplating questions about the here and the hereafter. Both live in reality of cultural cross-pollination that is the United States. Jordan speaks in Chinook Wawa subtitled in English; Sweetwater, the other way around.

They never meet in the film, but their paths constantly crisscross in the mythic narratives, pulsating rituals and holistic beliefs that form the soul of their people. This can be clearly appreciated in the way Hopinka integrates spoken passages from the Chinookan origin-of-death myth alongside their personal stories, and also in the interludes of ethnopoetic imagery that make visible the enduring presence of Indigenous cultural heritage in a world that relentlessly threatens to erase it.

Oneness with earth, water and sky is an audiovisual motif that runs throughout the film, raising a subversive mirror to our consumerist culture blighted by a deficit of spirit and driven by domination. In his noted work American Indian Liberation: A Theology of Sovereignty (Orbis, 2008), Osage scholar George "Tink" Tinker asserts, "In Indian cultures, people live and experience themselves as part of creation ... rather than living as separate from creation with the freedom or even responsibility to consume it at will."

Yet, it's worth pointing out that in "maɬni," not once does Hopinka engage in deliberate cultural and social critique; he merely allows the power of the moving image, film qua film, to invite deep reflection. Image after image, the reverential appeal to the beauty and sacredness of the natural world affirms "what ought to be," in the face of the deficient and distorted "what is."

While the film mesmerizes in its painterly beauty — it was shot in the coastal and forested environs of Oregon — Hopinka does not so much idealize Indigenous peoples as appreciate them from the lens of a compassionate observer.

Jordan prefers to speak in Chinook Wawa, but he is also a regular guy who drives a truck and who dotes over his small child with his wife by his side. Sweetwater has a childlike sense of wonder, musing over a mysterious opening behind a waterfall and what might lie beyond. Raised by a single mother, she admits to recovering from addiction. Being pregnant, she is soon to be a single mother herself. 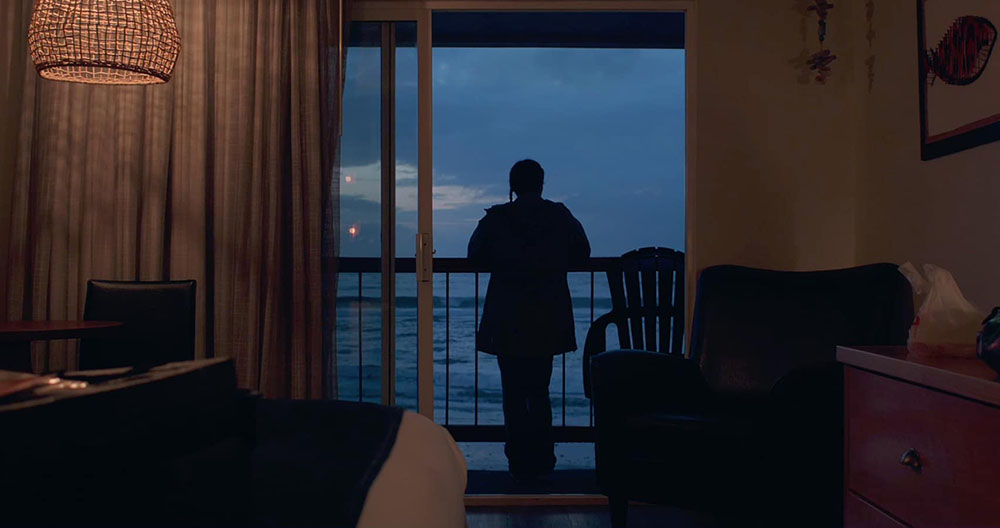 At a later turn, Sweetwater is back at the waterfall, allowing the rushing water to wash over her, while gesturing with open hands. Both characters are participants in the life-death-afterlife cycle, answers in via to their own questions.

An indoor venue is bursting at the seams with members of the Confederated Tribes of the Grand Ronde Community, which includes more than 30 tribes and bands from Western Oregon, Northern California and Southwest Washington. One of the leaders introduces a song as "New Beginnings," signaling the community to move forward to the promise of a new day, notwithstanding yesterday's misfortunes.

As the men begin singing and drumming, women of all ages spontaneously dance, circling the space with a graceful synchronicity. "If you sing, if you drum, if you dance, you do so for those who can't." Jordan's words from an earlier sequence eloquently resonate here. Members past, present and future are ushered into the circle by the collective heartbeat of tribal drums.

Even as an uninvited guest, I was caught up in the spirit of the dance, so ancient yet so new, and I was moved to tears. To virtually witness such an organic and eloquent expression of wounded hope was a humbling, awe-inspiring experience.

Classifying "maɬni — towards the ocean, towards the shore" as a documentary does not quite do it justice. It is an Indigenous weave. It is dreamscape. It is participation. It is a promise. It is.

[Precious Blood Brother Antonio D. Sison is associate professor of systematic theology at Catholic Theological Union in Chicago with a research interest in global audiovisual culture. He is the author of the upcoming book The Art of Indigenous Inculturation (Orbis, spring 2021). "maɬni — towards the ocean, towards the shore" is available for rental streaming from Sky Hopinka, www.skyhopinka.com.]