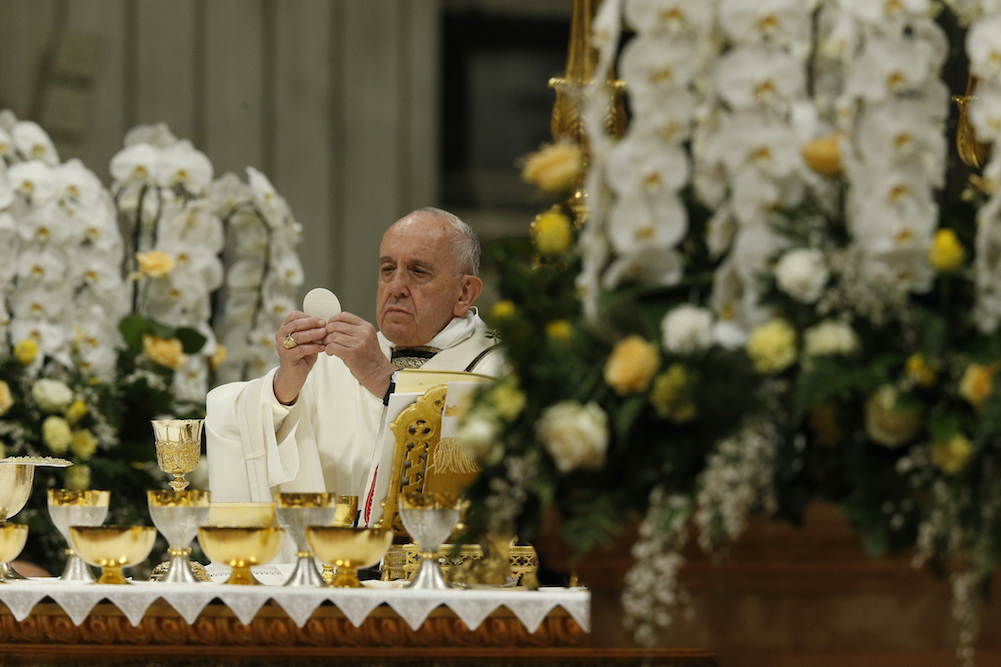 Pope Francis celebrates the Eucharist during the Easter Vigil in St. Peter's Basilica at the Vatican April 20, 2019. (CNS/Paul Haring

One of the distinctive features of the second person of the Holy Trinity is that the eternal word — and only the word, not the Father nor the Spirit — enters into creation as part of creation. God freely and lovingly surrenders the trappings of divinity in order to become one with and part of the material world (Philippians 2:6-11).

Our liturgical calendar marks a number of moments when we acknowledge this profound truth of faith. At Christmas, we celebrate the incarnation, when God the son becomes flesh of the world (sarx in Greek) and makes a home among humanity and the whole family of creation. Ordinary time recounts the preaching and deeds of Christ, as well as his miraculous engagement with the natural world. During Holy Week, we commemorate the last days of the Lord's life, recall the real precariousness and vulnerability of his passion and death and rejoice in his bodily resurrection from the dead.

But the presence of Christ in the world is not a one-time-only event marked by the life and death of Jesus of Nazareth, as if it were a historical marker merely worthy of post-factum commemoration. Rather, God's continued presence to us in the material world is precisely what the sacramental life of the church is all about. This is especially true at Mass.

When we gather at Eucharist, we celebrate the manifold ways Christ continues to enter into the concrete reality of creation. The Second Vatican Council's dogmatic constitution on the liturgy, Sacrosanctum Concilum, reminds us that Christ is "always present in His Church" and that during the celebration of the Mass, Christ is present in the presider, the assembly of the baptized, the holy Scriptures proclaimed and the Eucharistic species of bread and wine shared. Whether we consider the presence of Christ in our neighbor or the sacramental presence of Christ in the gifts of the altar, both reflect God's continued self-offering and closeness to all creation.

Pope Francis echoes the profundity of God's choice to communicate God's self to us in the ordinariness of time and space. Writing in "Laudato Si', On Care for Our Common Home," he says: "Encountering God does not mean fleeing from this world or turning our back on nature."

Furthermore, the pope highlights that the sacraments are themselves significant not only as a means of God's grace to the human family, but to all of God's creation.

The Sacraments are a privileged way in which nature is taken up by God to become a means of mediating supernatural life. Through our worship of God, we are invited to embrace the world on a different plane. … For Christians, all the creatures of the material universe find their true meaning in the incarnate Word, for the Son of God has incorporated in his person part of the material world, planting in it a seed of definitive transformation.

In a way, just as we can say with confidence that Christmas is a solemnity of all God's creatures, as I explained in my Christmas column, we can also say that the sacramental life of the church has ecological import. For this reason, when we gather to celebrate the Eucharist, we celebrating something of cosmic significance.

The Eucharist is not simply a means by which humanity receives the sacramental presence of Christ, as if the bread and wine were mere vehicles of the divine for us humans alone. Rather, the Eucharist is the privileged place where God is now present to our world as part of that world. As Francis explains, again in Laudato Si':

It is in the Eucharist that all that has been created finds its greatest exaltation. Grace, which tends to manifest itself tangibly, found unsurpassable expression when God himself became man and gave himself as food for his creatures. The Lord, in the culmination of the mystery of the Incarnation, chose to reach our intimate depths through a fragment of matter. He comes not from above, but from within, he comes that we might find him in this world of ours. In the Eucharist, fullness is already achieved; it is the living center of the universe, the overflowing core of love and of inexhaustible life. Joined to the incarnate Son, present in the Eucharist, the whole cosmos gives thanks to God. Indeed the Eucharist is itself an act of cosmic love.

Others have likewise tied the celebration of the Eucharist — in which human creatures in all our finite corporeality and fragility gather in thanksgiving to receive the sacramental presence of Christ in earthen elements formed from wheat and wine — to the broader community of creation. Famously, Jesuit Fr. Pierre Teilhard de Chardin composed a poetic reflection on this theme titled "The Mass on the World" in his 1961 book Hymn of the Universe.

More recently, the late philosopher and spiritual writer Beatrice Bruteau wrote in a 1990 article titled "Eucharistic Ecology and Ecological Spirituality," that we needed to renew the story we tell about the Eucharist and the world. She called for a shared vision of our "Eucharistic planet," by which she meant that Christians would take seriously the significance of God's presence in the material world, especially in light of environmental catastrophes and the idolatrous application of Christian Scriptures to justify our ecological abuse of nonhuman creation. Bruteau explains:

A sense of the Eucharistic Planet, of the Real Presence of the Divine in the world, is something we need now for the protection of the planet. It may be that biblical religion has encouraged Western civilization to take unfair advantage of the natural environment under the belief that it was given to humanity by God for purposes of human exploitation and has no rights of its own. It may be that we need to tell ourselves a new story about how we fit into the general scene and what it's all about. I don't dispute that. But I would like to emphasize that on the basis of the Gospel we can say something quite constructive and very exciting that will give us the new story and a vision of the wholeness of the planet.

Such considerations of the connection between the Eucharist and the material world challenge us — especially in an age of catastrophic climate change — to rethink the relationship between our sacramental worship and the way we live our lives. 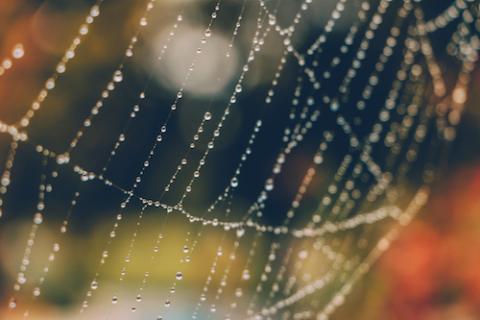 As Sacrosanctum Concilium asserts, the Sunday celebration of the Eucharist is the source and summit of our faith. We bring our whole selves to the Lord's table, and we go forth from that celebration renewed in our baptismal call to follow in the footprints of Jesus Christ. It is a time of renewal and recommitment, an opportunity to "be what you can see, and receive what you are," as St. Augustine famously exhorted the faithful in an exhortation on the Eucharist 1,600 years ago (Sermon 272).

When we look at the blessed sacrament, do we see the earthen, material, fragile and finite web of creation of which we are a part and God lovingly chose to enter?

When we say "amen" to the proclamation "the body of Christ," do we recognize that we are also affirming the goodness of the world that God freely created and renewing our responsibility to care for this world as it already cares for us?

When we consider the importance of the Sabbath day, do recognize what Francis proclaims in Laudato Si', that: "Sunday is the day of the Resurrection, the 'first day' of the new creation, whose first fruits are the Lord's risen humanity, the pledge of the final transfiguration of all created reality"?

May we approach Christ in the Eucharist with a renewed sense of the ecological significance of the sacrament we share, the divine gift we receive, the communion in which we are called to participate and the duty we have as members of the body of Christ to "care for our common home." Anything short of that may constitute an ecological sin of omission at best or a form of idolatry at worst.

A version of this story appeared in the March 6-19, 2020 print issue under the headline: The ecological significance of the Eucharist.