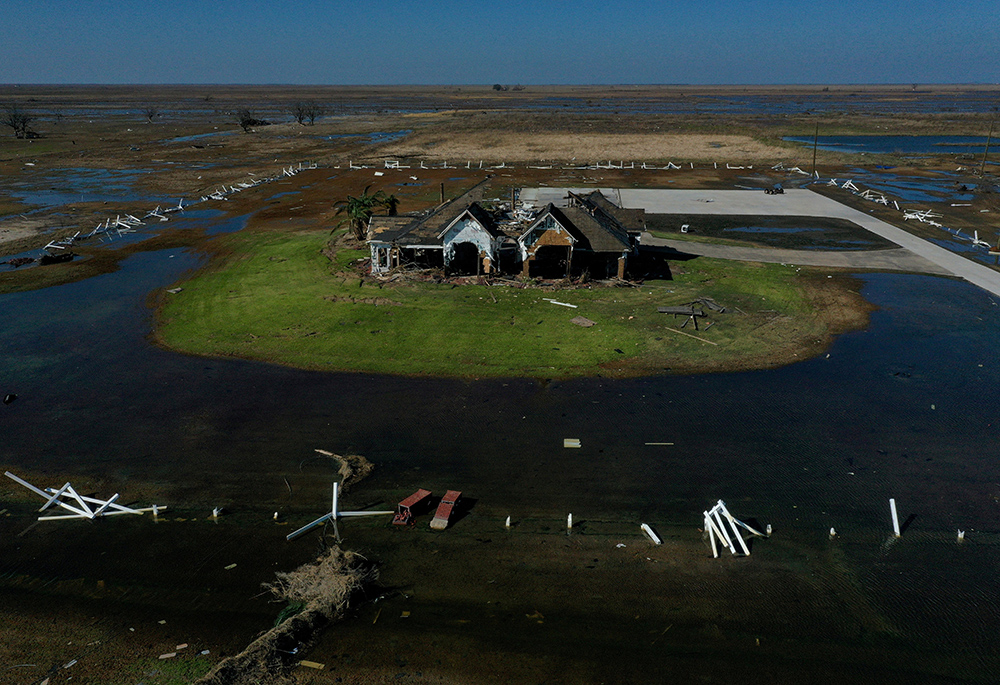 A home is seen destroyed in the aftermath of Hurricane Delta October 10, 2020, in Creole, Louisiana. (CNS/Reuters/Adrees Latif)

The story starts off simple enough.

A woman starts a social justice group at her Catholic parish.

During one particular meeting, she begins to talk about "Laudato Si', on Care for Our Common Home," Pope Francis' 2015 encyclical on ecology.

But she was quickly cut off.

"We shouldn't rock the boat," she said her pastor told her, as he felt the papal teaching document, the first ever devoted entirely to issues of the environment and humanity's relationship with the rest of the created world, was too controversial.

The anecdote, which did not name the parish or priest, was collected as part of the global church listening process that Francis has invoked through the synod on synodality. It was included in a report compiled by the Catholic Climate Covenant at the invitation of the U.S. Conference of Catholic Bishops as part of the synodal process.

From January to June, Catholic Climate Covenant conducted a series of virtual listening sessions, online surveys, reflections with college students and more to give voice to the joys, hopes and, more often, "expressions of sorrow and disappointment" of U.S. Catholics with their church's response to Laudato Si' and climate change. Approximately 300 people, the majority women, participated, and the report was made public in late July.

Throughout the sessions, a near-unified message emerged: lay Catholics who have heard, embraced and worked to live out church teachings on the Christian responsibility to safeguard God's creation feel little to no support from clergy, bishops and dioceses, and in some cases direct opposition.

"The overarching takeaway was the need for unified support from U.S. dioceses and archdioceses to make Laudato Si' and climate change a priority," the report said.

That discovery was not a surprise for Dan Misleh, founder of Catholic Climate Covenant, who has learned often of stories like the woman rebuffed by her priest.

"I've been working on this issue for 16 years, and so I've kind of heard it all," he told EarthBeat.

But he hopes that the synod process will ensure the wider church hears it, too — a message increasingly from the laity that there is resistance within the U.S. church to addressing climate change and other environmental issues, even as Francis and the Vatican have elevated them as urgent priorities for Catholics and all people. 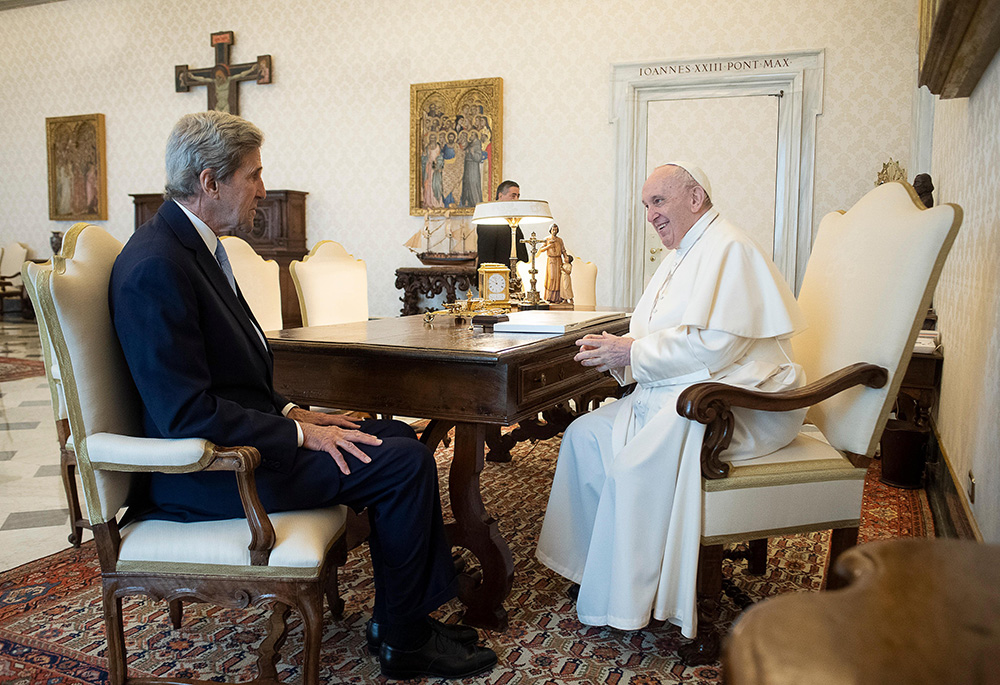 Along with the lack of institutional church support, Misleh said another main takeaway from their synod listening sessions came from young adults, who are concerned by climate change but feel a disconnect between their college campuses, where the issue is discussed and engaged, and their home parishes where it's ignored or devalued.

"It's just not being supported or nobody's talking about it. Or nobody wants to talk about it because it's still seen as a political issue instead of a moral issue or a scientific issue," he said.

The Covenant synodal listening sessions included responses from a small group of students at Creighton University. It also drew on feedback that young adults across North America delivered directly to the pope in February as part of a virtual synod listening session organized by the Vatican and Loyola University Chicago. During that session, one student bluntly told the pope that "U.S. Catholic leaders' failure to share and enact the church's own climate teachings is disillusioning young people." 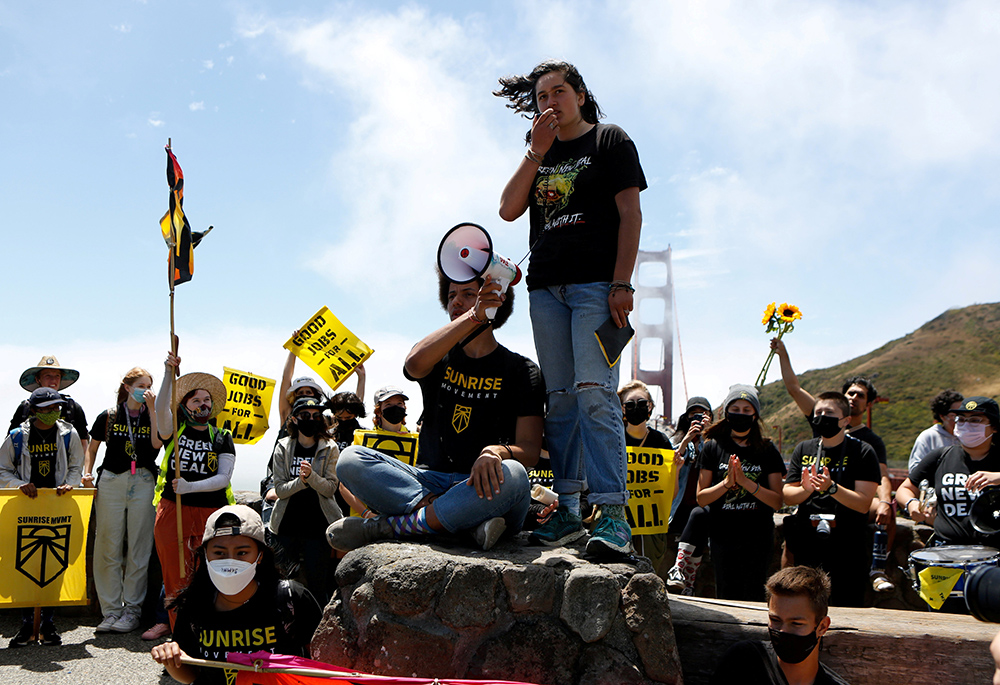 In their feedback to the Covenant, Creighton students said they rarely hear climate change discussed in their home dioceses or connected to church teaching in homilies. One student described a sense of "idleness and ignorance" among priests. Another considered neglect of climate change as irresponsible. And a third expressed confusion when fellow Catholics describe themselves as "pro-life" but deny the environmental threats facing people and the planet.

"These testimonies from Catholic students revealed the failures of individual dioceses and parishes to implement the teachings of Laudato Si' and the resulting frustration and disappointment at this failure," the report stated.

Throughout the synod report, respondents said that creation care has become politicized and "stigmatized" within their churches, pointing to factors like money and the belief that pastors and bishops see climate change as more a political, rather than moral, issue.

One woman shared that her parish pushed back on creation care efforts because a large donor had ties to the fossil fuel industry. Another respondent said that their diocese, which was not identified, ran negative articles on Laudato Si' in the diocesan newspaper, which the respondent said "made it virtually impossible" to implement ecologically focused programs. Overall, silence from priests and bishops, a pattern documented in a recent study, "created an environment of apathy and indifference," the report said, that has made creation-focused initiatives an "uphill battle."

Despite a lack of support from the church hierarchy, the report indicated efforts to respond to the call to care for creation continue.

Many participants said they've started creation care teams or devised Laudato Si' action plans, and many drew inspiration from the example of Francis and the work of religious communities, particularly women religious who have long been leaders in environmental action. But those steps so far haven't led to more institutional engagement, which listening session participants believe is essential for a more robust church response to the global climate crisis.

Students suggested the Catholic Church could do just that by spreading its teachings on valuing and preserving creation in every parish and diocese, and for the church to use its power and influence "to enact meaningful discussions and solutions for climate change." Within the church, they recommended moves to better educate Catholics, reduce greenhouse gas emissions, divest from fossil fuel companies and urge advocacy.

Misleh said the report shows there are a lot of U.S. Catholics who approach climate change and environmental threats not from a place of politics "but from the perspective of their faith." And they want to see the same from church leadership.

"I think that's the motivation for a lot of people. So I hope that the bishops, the universal church hears that people do care about these issues because they are trying to authentically live their faith," he said.

Read this next: US Catholic church is failing to respond to climate emergency, theologian says
Read this next: Church's multiyear initiatives on synodality, Laudato Si' and Eucharist intertwine
This story appears in the Synod on Synodality feature series. View the full series.