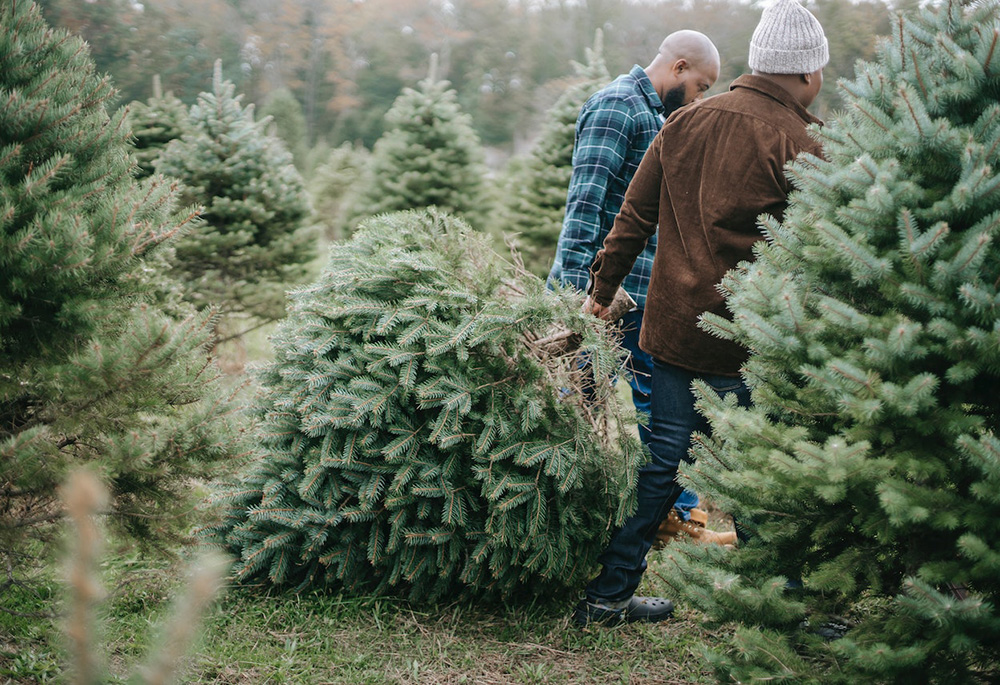 We might not think about buying a Christmas tree and decorating it as a ceremony. But the actions we ritually perform to carry out this annual tradition suggest otherwise: a journey to select a tree we then bring home to adorn with objects imbued with deep meaning, surrounded by people important to us. Unwritten yet "sacred" rules guide the process.

Twenty-five to 30 million live Christmas trees are purchased in the United States each year. Add to that countless artificial trees set up in homes, stores and churches. That prevalence surely makes it one of the most widespread — if mostly unrecognized — American ceremonies.

And this ceremony is still developing and unfinished.

While the ceremony of the Christmas tree draws on centuries of sacred tree traditions from multiple faith perspectives, the Christmas tree attained its incredible cultural power in the U.S. in the last century, expanding outside religious settings and into secular spaces that one might think are the furthest from sacred ceremonies. 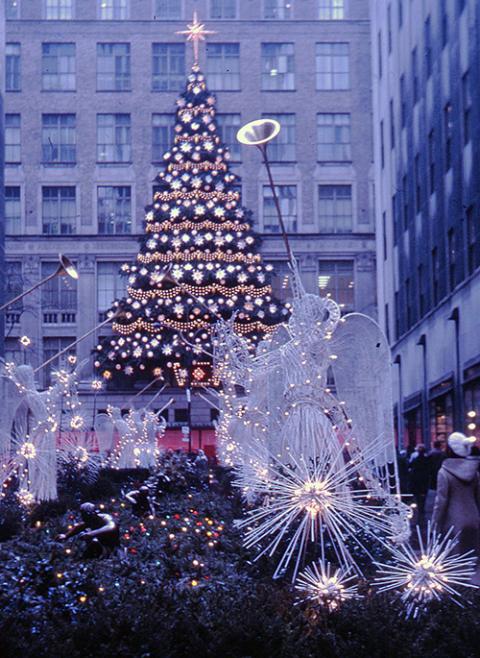 The Rockefeller Center Christmas tree is pictured in 1970 in New York (Wikimedia Commons/Phillip Capper from Wellington, New Zealand, CC BY 2.0)

Now the Indigenous traditions of North America are adding the latest stage in the Christmas tree tradition, calling us to complete the ceremony by honoring the sacrifice of the tree. By doing so, the Christmas tree will help us enter into deeper relationship with the land and see the land's love for us.

The Christmas tree was an important part of the spirituality of Nicholas Black Elk, the Lakota holy man made famous by the book Black Elk Speaks. In a letter the now Servant of God wrote in January 1908, he detailed the Christmas celebrations of a number of Pine Ridge communities, where the people "had Christmas tree." On Dec. 23, he went with one community to cut their tree.

"I went to the hill in the trees," Black Elk remembered, "and they did a great honoring of me."

The importance of the Christmas tree for Black Elk flowed from Catholic tradition and the Sun Dance, a ceremony around a cottonwood tree traditionally practiced by Plains Tribes and now by tribes across North America. During this four-day fast and dance of purification, the cottonwood tree gathers in and renews the people.

Lakota educator Dave Archambault Sr. wrote in 2016 that there is "a fundamental likeness and comparison behind the meaning of a Christmas Tree and a Sundance Tree." For Archambault, "both are traditions that embody and symbolize a good way to be with one another."

The main difference between the Sun Dance and Christmas tree traditions is land. Typically, we do not harvest a Christmas tree with a ceremony that honors its sacrifice and connects us to the land.

Neva Standing Bear explained in Lakota Texts: Narratives of Lakota Life and Culture in the Twentieth Century how her community addressed that difference by honoring the Christmas tree in the same way they honored the Sun Dance tree.

Key to this approach is asking permission and making an offering. For Christmas, Standing Bear said the people went out on the land and chose the tree together, they "laid tobacco around it and they prayed." Like with the Sun Dance tree, a young girl and boy made the first cuts, then the people carried the tree together to the church without letting it touch the ground.

From a Lakota perspective, the tree is not just a symbol onto which we project meaning but a being that prays with us. At the church, people decorated the Christmas tree with traditional prayer ties, each offering specific petitions. 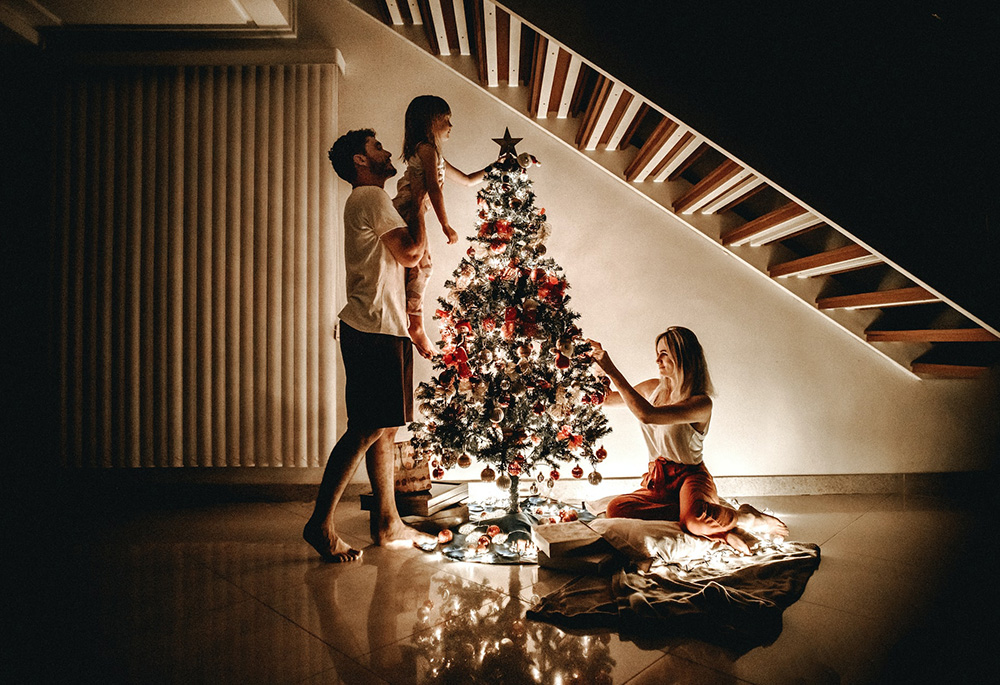 "Some people say thanks, and some people want peace," Standing Bear recounted. "Or some people are sick, so they want to get better, or they suffer something, so they also put something on the tree for that reason," she continued.

When the Christmas season was over, the tree was not thrown away, but respectfully helped on its journey back to the earth. In this case, it was burned in the fire for the Inipi, or sweat lodge, for the purification of the people.

There is a circularity to the Christmas tree tradition in the Lakota context, the bridging of the old and new, of the land and the people. In it, we see the multifaceted work of Indigenous ceremony that Robin Wall Kimmerer describes in her runaway bestseller Braiding Sweetgrass.

Ceremony unites people in a common vision and forges spiritual connection to land and relatives on which people depend. "Ceremonies transcend the boundaries of the individual and resonate beyond the human realm. These acts of reverence are powerfully pragmatic. These are ceremonies that magnify life," says Kimmerer.

Like for Black Elk and Standing Bear, the Christmas tree bridges the old and new for us today, only in reverse.

Contemporary, American, non-Indigenous society has a few meaningful civic ceremonies, like graduation, Kimmerer argues, but the "ceremonies that endure are not about land; they're about family and culture, values that are transportable from the old country. Ceremonies for the land no doubt existed there, but in a sense they did not survive emigration in any substantial way."

Except for the Christmas tree. The Christmas tree tradition came from "the old country" and not only survived, but expanded in importance here in Turtle Island, an Indigenous name for North America. The Christmas tree ceremonially stands in the middle of our families, communities and our nation, and like the Sun Dance, renews us — magnifying life. 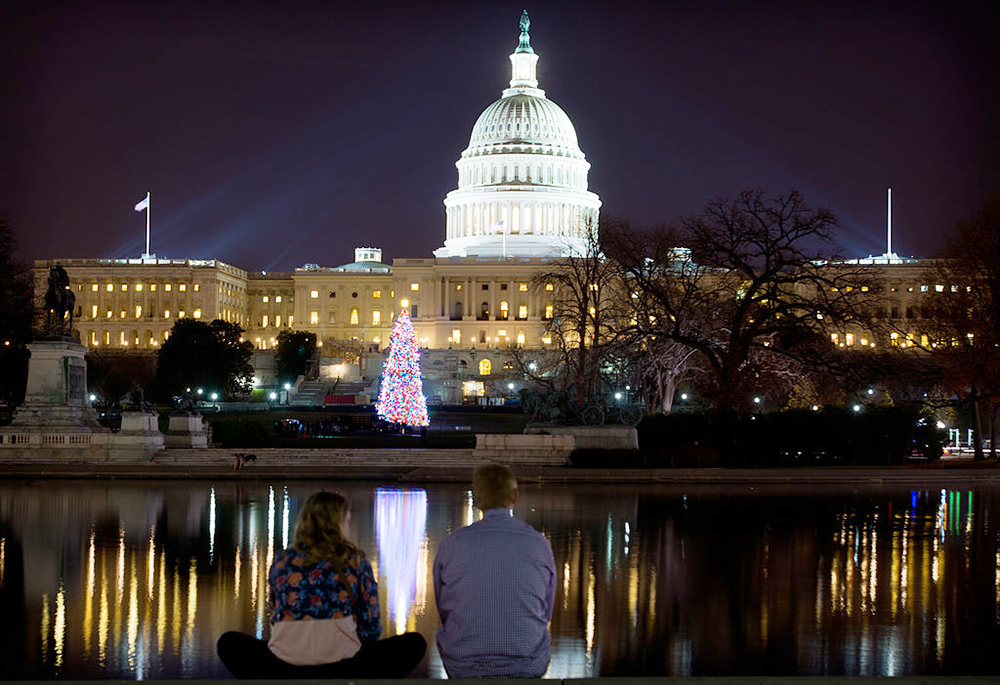 The lit 2012 U.S. Capitol Christmas Tree, from the Blanco Ranger District of the White River National Forest near Meeker, Colorado, decorated with handmade ornaments, draws visitors to the Capitol grounds, shortly after being turned on, Dec. 4, 2012. (Wikimedia Commons/U.S. Department of Agriculture, CC BY 2.0)

We only need to add our ceremonial gratitude to fully participate in the circular call and response between the people and land, what Kimmerer calls a "relationship of loving respect and mutual caregiving." Something that has already happened at one of America's most important Christmas tree ceremonies.

When the Utes of southwest Colorado provided the nation with the 2012 Capitol Christmas Tree, they chose the "tallest and most beautiful looking tree in the forest," Bradley W. Hight, vice-chairman of the Ute Mountain Ute Tribal Council explained. They honored it before cutting with a ceremony from the Sundance Way and sent it on its journey to the U.S. Capitol to help bind the people of Turtle Island together.

Many of us already carry out a Christmas tree ceremony in our homes, whether we have thought about it in that way or not. If we follow the example of our elder sisters and brothers on this land, we can imagine new practices informed by but not taken from them: make an offering, ask permission and honor the gift of the Christmas tree's life and the work the Christmas tree does.

"There is wisdom in regenerating [ceremonies from the old country] here, as a means to form bonds with this land," said Kimmerer. We can grow the roots of the Christmas tree tradition in a meaningful way by not only recognizing our part in the ceremony, but also the role of the tree and all to which it points during this season of renewal.