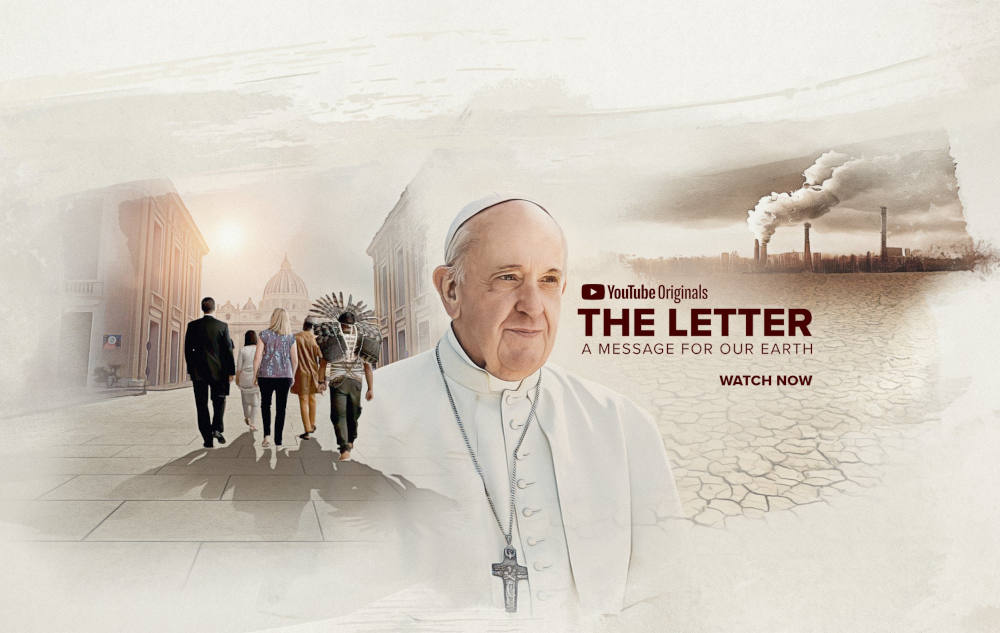 Pope Francis and global activists are pictured in a banner for the new YouTube Originals film on the pope's encyclical, "Laudato Si', on Care for Our Common Home." The film launched Oct. 4, feast of St. Francis of Assisi, the same day the Holy See acceded to the Paris Agreement. (CNS photo/YouTube Originals)

The Vatican hosted the global premiere of a new documentary on the urgent need to address climate change on the feast of St. Francis of Assisi, the same day the U.N. Framework Convention on Climate Change and the 2015 Paris Agreement entered into force for the Holy See.

The two events Oct. 4 helped mark the feast of the patron saint of animals and ecology, and the namesake of Pope Francis.

The Vatican became a formal party to the U.N. convention in July and declared at the same time that it intended also to formally join the 2015 Paris Agreement.

"Both documents will enter into force for the Holy See, in the name and on behalf of the Vatican City State, on 4 October 2022, the Solemnity of St. Francis," said a joint statement by the pontifical academies of Sciences and Social Sciences and the Vatican Secretariat of State's section for relations with states.

It was the same day a new film was launched at the Vatican for the world premiere of "The Letter: A Message For Our Earth," based on Pope Francis' 2015 encyclical letter, "Laudato Si', on Care for Our Common Home."

Presented by YouTube Originals, the film was written and directed by Emmy-winner Nicolas Brown and produced by the Oscar-winning production company "Off the Fence." It was made in partnership with the Laudato Si' Movement, the Vatican Dicastery for Promoting Integral Human Development and the Dicastery for Communication.

In the seven years since the pope's landmark encyclical was published, "the environmental crisis of our common home has worsened drastically," Cardinal Michael Czerny, prefect of the integral development dicastery, said at a Vatican news conference Oct. 4.

Czerny said that the documentary shows how "the ecological crisis is happening now."

"The time is over for speculation, skepticism and denial, and certainly for irresponsible populism. Apocalyptic floods, mega droughts, disastrous heat waves, catastrophic cyclones and hurricanes have become the new normal. They continue today. Tomorrow, they will get worse," the cardinal said.

Czerny said "The Letter" presents a new opportunity for all people, especially those on the peripheries represented by the film's main protagonists who are typically ignored in global environmental summits, to engage in a dialogue about the environmental challenges facing the planet and possible solutions to them.

"This beautiful film, heartbreaking yet hopeful, is a clarion cry to people everywhere. Wake up. Get serious. Meet. Act together. Act now," Czerny said.

At the news conference, Hoesung Lee, chair of the Intergovernmental Panel on Climate Change, called the day "a special day for the alliance between science and faith."

He praised the pope's letter, both the encyclical and the film, as being in dialogue with science and emphasized action was urgently needed.

"The scientific community welcomes the opportunity to engage with artists and the people of faith. Both faith and art hold a great convening power and can inspire genuine collective climate action," he said.

Lee added that he welcomed the Holy See's entry into the Paris Agreement, an action he said "injects new momentum into the global race to implement solutions to the climate crisis."

"The IPCC assessments clearly point out that climate impacts and risks are becoming increasingly complex and more difficult to manage, and that accelerated and equitable climate action in mitigating and adapting to climate change is critical to sustainable development," he said.

"The next few years will be critical. There are ways to improve our chances of success," with international cooperation key to achieving the climate goals under the Paris Agreement, Lee said. "The stakes have never been higher, and we should be the source of the solution to this crisis."

The film "The Letter" features activists representing wildlife, Indigenous peoples, young people and the poor — the voices of those who are least listened to, but are the most impacted by the consequences of climate change, Brown said at the news conference. The film includes their meeting with Pope Francis last year to talk about their national and personal challenges and what needs to be done.

The film is streaming for free at theletterfilm.org and YouTube Originals. People were encouraged to host viewings on a large screen at their parish, school or local community in order to encourage dialogue and action.

Asked about the encyclical's "patchy" reception within the church in the seven years since its release, Czerny said that "maybe one of the enemies of Laudato Si' is the word green," in that categorizing the document in such a way allows people to cast it aside due to preconceived beliefs. He also challenged journalists to report more on the encyclical and the ecological crises facing the world.

"I'm very hopeful that the film will bring Laudato Si' into places and amongst people who haven't, as Lorna said, opened the book," the cardinal said. "But I also hope that the many different factors will come together so that we start taking this more seriously and more deeply and more universally."