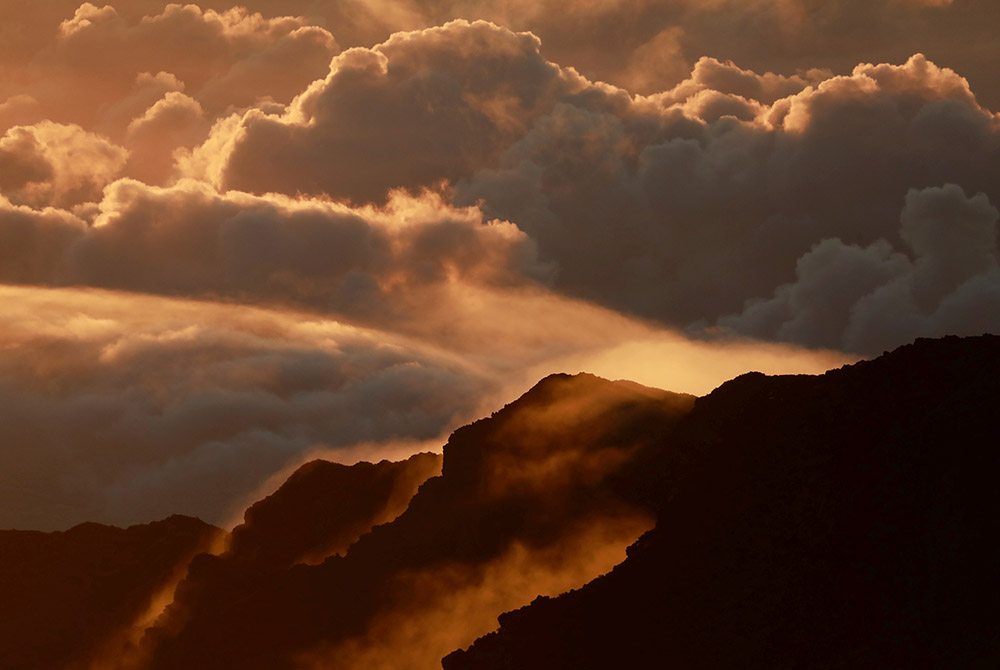 Light illuminates a crater during the sunrise at Haleakala National Park on the Hawaiian island of Maui Oct. 9, 2018. (CNS/Navesh Chitrakar, Reuters)

The world is home to many religions, yet there is common ground in the belief that the Earth, itself a common home, must be respected and protected in the face of growing environmental threats. 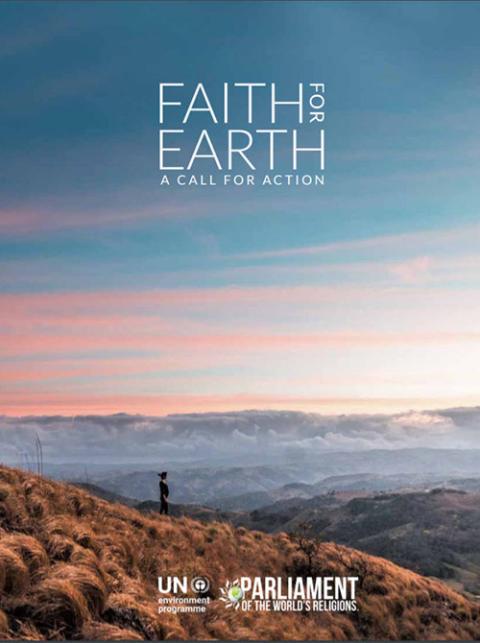 That is the main focus of a new book, Faith for Earth: A Call for Action, from the United Nations and the world's religious communities that spotlights the shared reverence and responsibility across faiths toward the environment, and their collective resolve to take actions to preserve it.

Faith for Earth was released Thursday by the U.N. Environment Programme and the Parliament of the World's Religions during the Faith for Nature Global Conference, held in Skálhol, Iceland. The 57-page book, available online and in print, describes how many religions view the natural world and their duty to safeguard it. Those faith-based perspectives are paired with scientific explanations of the multitude of crises threatening the planet's oceans, atmosphere, ecosystems and people.

A first version of the book was published in 2000 under the title Earth and Faith: A Book of Reflection for Action. In the 20 years since, "the planet has undergone profound and rapid changes," reads the preface, among them climate change, accelerating species extinction, collapsing ecosystems and "deepening human suffering."

"The decades ahead present us with a crucible of moral choices," David Hales, climate action chair for the Parliament of the World's Religions, writes in an opening message. 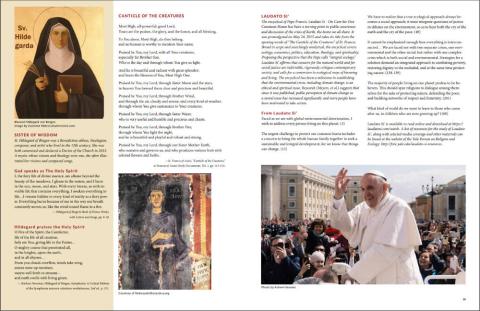 "Scientific evidence documenting the crisis is undeniable and grows with every passing day. At the same time, there has been a surge of faith-based action and advocacy on behalf of the environment from religious groups everywhere. The response is coming from every corner of the world, reflecting both the diversity of the ways we define our relationship with nature and the essential unity of values at the core of all our hope," the book states.

It adds, "It is time, as never before, to call on our faith, our values, our religious teachings and traditions — on Faith for Earth. And it is time for action."

The book's faith section was authored by Kusumita P. Pedersen, professor emerita of religious studies at St. Francis College, in Brooklyn Heights, New York. It presents teachings on creation and the environment from a dozen faiths, including Christianity, Buddhism, Baha'i, Sikhism, Daoism and Islam, as well as a number of Indigenous traditions. 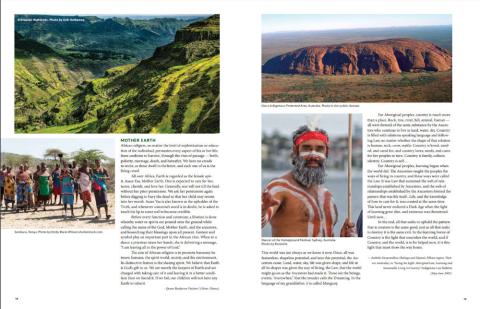 The book quotes a number of prominent faith voices, including Pope Francis, Ecumenical Patriarch Bartholomew of Constantinople and Mohandas Gandhi, along with St. Hildegard of Bingen, Passionist Fr. Thomas Berry and Rabbi Arthur Waskow, and cites passages from the Book of Genesis, the Hadith, Navajo chants and Jainism texts.

The prayers, hymns and texts featured in Faith for Earth show how different belief systems have often used similar language in describing the world.

"O Mother Earth! You are the world for us and we are your children," reads the Hindu hymn "In Praise of Mother Earth." 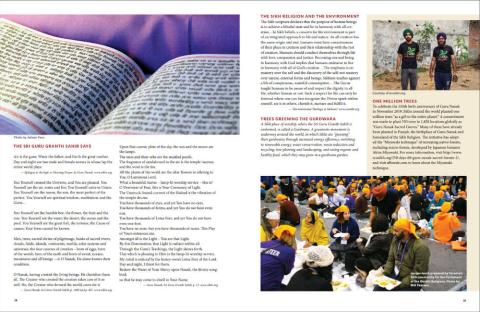 "Praised be You, my Lord, through our Sister Mother Earth, who sustains and governs us, and who produces various fruit with colored flowers and herbs," St. Francis of Assisi wrote in his "Canticle of the Creatures."

"Air is the guru; Water the father; and Earth the great mother. Day and night are two male and female nurses in whose lap the entire world plays," reads a passage in the Guru Granth Sahib, the central Sikh scripture.

"Heaven is my father and Earth my mother and even such a small creature as I finds an intimate place in their midst," wrote Neo-Confucian philosopher Chang Tsai in his 11th-century "Western Inscription."

At the end of the faith section, the book summarizes eight points of agreement across religions regarding humans' relationship to the environment. Among them:

Along with teachings, Faith for Earth focuses on how many religious communities have responded to the call to care for the earth. One shared focus across faiths has been trees. 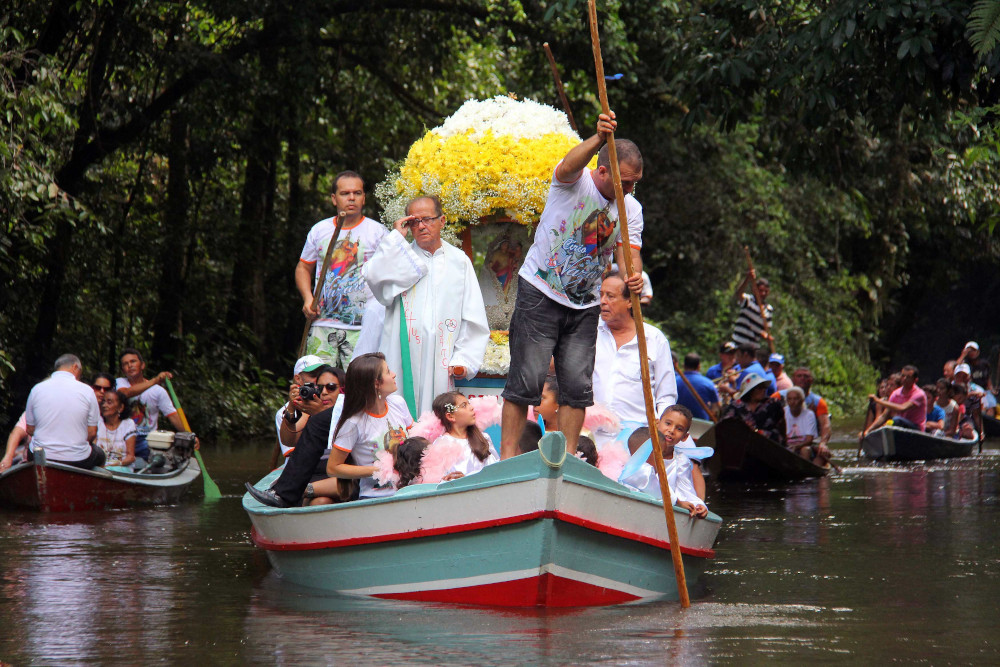 Pilgrims travel in boats as they accompany the statue of Our Lady of Nazareth during an annual river procession and pilgrimage along the Apeu River to a chapel in Macapazinho, Brazil, Aug. 3, 2014. (CNS/Reuters/Ney Marcondes)

Many Shinto shrines are found in forests, which are then viewed as sacred, leading in recent decades to the preservation of the area's ecosystems and raising environmental awareness. In November 2019, Sikhs celebrated the 550th birthday of Guru Nanak by planting 1 million trees. Catholic dioceses and groups in Africa have also emphasized tree plantings.

Since the early 1990s, some Buddhists have ordained trees, wrapping traditional orange cloths around them, to draw attention to deforestation, while those living in the Himalayan Mountains have networked to take steps to protect the local environment. Elsewhere in the Himalayas, the Chipko movement, especially prominent among Hindu women, began holding vigils in the early 1970s to stop logging in the region. And the Interfaith Rainforest Initiative today is a global effort to end tropical deforestation.

The book also highlights measures that religious communities have taken to live out stewardship in their own actions, such as the Sisters of Earth network of Catholic women religious and their commitment to eco-justice and sustainability.

Sikhs have also worked to "green" their houses of worship, known as gurdwaras. And earlier this year, 500 rabbis and Jewish leaders issued "Elijah's Covenant," a letter calling for action on climate change and support for refugees fleeing disasters.

The practice of a "Green Ramadan" has gained in popularity among Muslims, which includes conserving food at the traditional Iftar evening meal each night to give to people in need, adopting a more plant-based diet and using less disposable products and more reusable items. Last year, the Fiqh Council of North America, which provides guidance to Muslims on the continent, called for Muslim investment firms to develop fossil fuel-free portfolios that include investments in clean energy.

The U.N. has produced guidelines to help houses of worship reduce energy use and become more sustainable. With buildings responsible for roughly 30% of greenhouse gas emissions worldwide, the U.N. said green adaptations by the globe's estimated 100 million-plus houses of worship would be "a massive demonstration of commitment to sustainability."

Said Iyad Abumoghli, director of the U.N. Environment Programme's Faith for Earth Initiative, "Our challenge is not that we don't know what to do — it's how quickly we can do it. … We’re calling on everyone — countries, cities, the private sector, individuals, and faith-based organizations to become part of the flourishing global interfaith movement that is increasingly bringing people together to protect and sustain life on Earth."

A version of this story appeared in the Dec 11-24, 2020 print issue under the headline: Environmental threats.