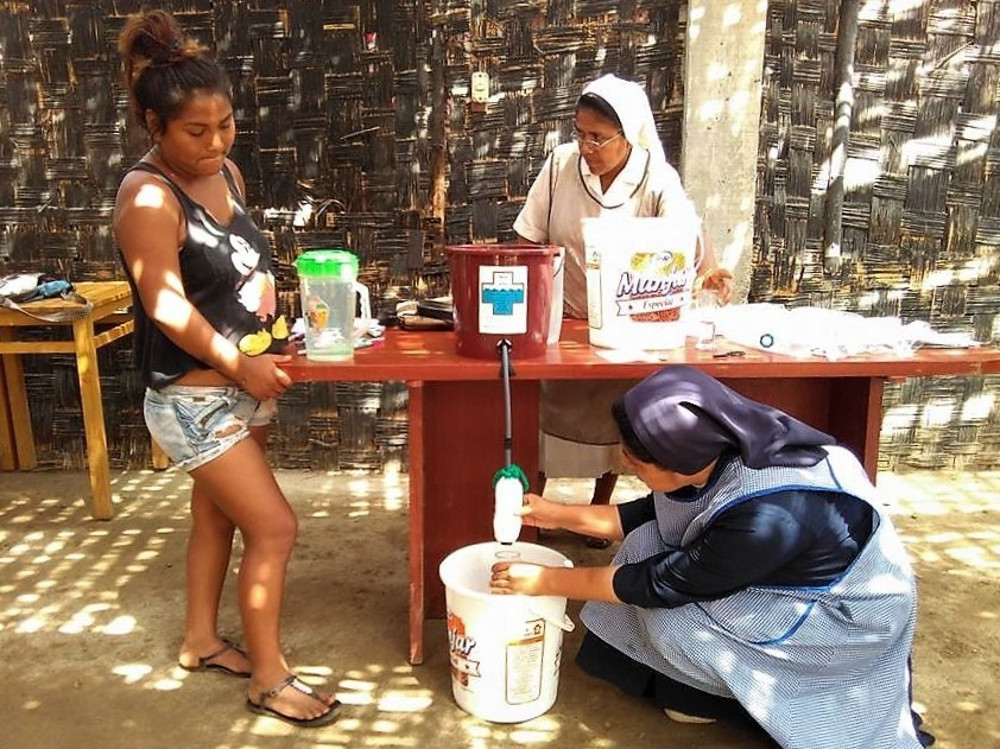 After flooding and landslides in Peru, Water With Blessings partnered with the Daughters of Charity of St. Vincent de Paul to distribute water filters and provide training on their use for survivors. (Provided by WWB Mission Partners)

Water literally is both the gift of life and a threat of death. In my home of New Orleans and many places like it throughout the world, we know too well the death-dealing power of water. While we have spent billions to build a levee system to protect people and buildings, the failure to rebuild aging sewerage pipeline infrastructure exacerbates larger fiscal crises. We can't live with too much of it, and we can't live without its life-giving and cleansing powers.

In Genesis, water is both the source of life-giving creation and the chaos of the flood. In Exodus, water becomes a weapon against the oppressive Egyptians. Physical thirst is a symbol of the deepest human desires for eternal life and love in God.

The prophet Isaiah calls "all who are thirsty" and "have no money" to drink and eat until they are filled. And just as the heavens pour rain and snow on the earth to make it fruitful, so Isaiah reminds us that God is "generous and forgiving" (Isaiah 55:1, 7, 10).

Jesus is the living water of salvation (John 7:38). During the Easter liturgy, the Easter candle is lowered into water three times, depicting how Christ was lowered into, and rose from, the tomb. There is no more integral religious symbol of the possibility of the transformation of death into life.

Although 71 percent of Earth is covered with water and the adult human body is at least 60 percent water, there is no law that guarantees access to clean water. The Compendium of Social Doctrine of the Church states that "the right to safe drinking water is a universal and inalienable right."

Yet this Earth Day we may not realize how a water crisis impacts at least one in every three people globally and nearly 10 million people in the United States. The people of Flint, Michigan, are not alone in their struggle for clean, accessible and affordable water. If infrastructure and costs are not addressed immediately, more than 40 million American households will likely face a crisis in cost and/or access.

Imagine a life without water. Privileged Americans take for granted our access to, and use of, clean water. Yet nearly 850 million globally — about one in every nine people — lack access to safe water. And 2.3 billion people have no access to a toilet. We Americans have not given this national and global crisis the attention it deserves.

According to a 2017 study, Michigan State University researchers found that water prices need to increase by 41 percent in the United States over the next five years to cover the costs of replacing aging water infrastructure and adapting to climate change. That means that more than one-third of all Americans may not be able to afford water by 2020.

In states like Alabama, Arkansas, Kentucky, Louisiana and Mississippi, as many as 83 percent of residents are at high risk of becoming unable to pay their water bills. These include people who live in rural and urban areas.

The American Society of Civil Engineers' 2017 infrastructure report card issued U.S. drinking and wastewater grades of D and D+, respectively. According to the American Water Works Association, an estimated $1 trillion is necessary to maintain and expand service to meet demand over the next 25 years.

Nevertheless, the Trump administration and many libertarians believe water is merely an economic good to be privatized for monetary gain regardless of its impact on the poor. Privatization and deregulation threaten both access to, and affordability of, clean water.

May we recognize how water unites all people to the Earth, to one another and to God.

This Earth Day, people of faith must address this fundamental pro-life issue. Catholic Climate Covenant and Eco-Jesuit, among others, regularly offer action tips to implement the environmental encyclical of Pope Francis, "Laudato Si', on Care for Our Common Home."

Water.org provides an outstanding example of the kind of creative social innovations necessary to care for both the Earth and our most vulnerable brothers and sisters. Water.org utilizes micro-financing as a way to build local infrastructure, increase water access, and reduce water costs to millions of people throughout the world.

Perhaps there is no more apt symbol for our time than water. Many march and cry out to God for justice and the need to be cleansed of the moral and political scandals that wreak havoc upon the most vulnerable in our society. May we find in water our shared vulnerability and humanity. May we recognize how water unites all people to the Earth, to one another and to God. It is time we extend its affordability and accessibility to all.