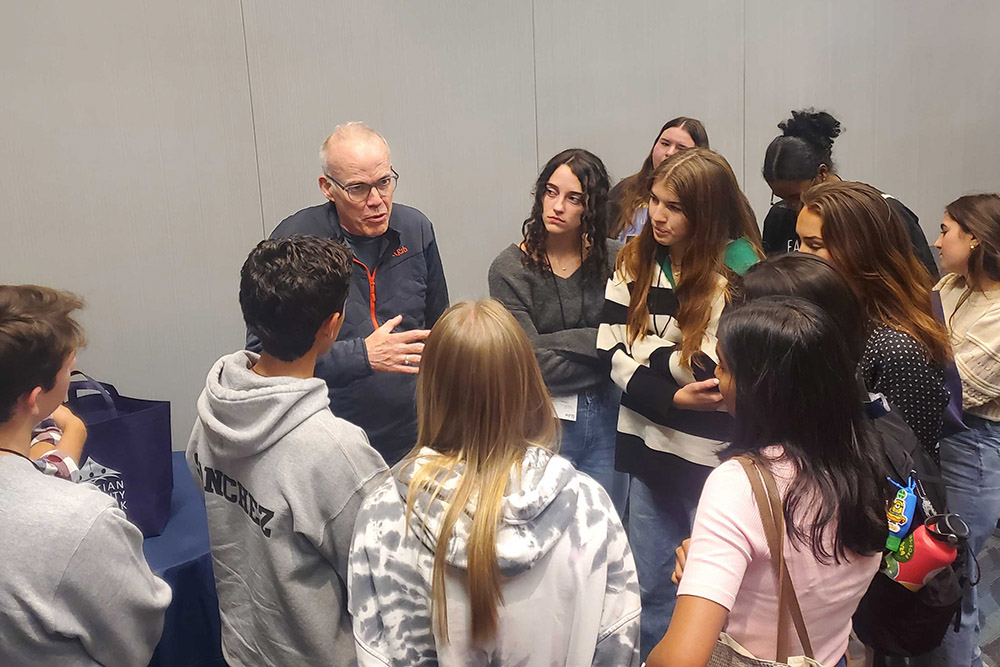 Environmental activist and writer Bill McKibben talks with attendees after a breakout session at the 25th annual Ignatian Family Teach-In for Justice on Oct. 22 in Washington, D.C. (EarthBeat photo/Brian Roewe)

In rallying a hall of 1,500 Jesuit and Catholic school students to take on the global challenge of climate change, environmental activist and writer Bill McKibben wasn't just speaking to them. He was also addressing their elders.

"Young people have done their job," McKibben told the audience Oct. 22 at the 25th annual Ignatian Family Teach-In for Justice, referring to the youth-led strikes, walkouts and protests over the past several years that have elevated climate change, an issue perhaps more than any other that will define their lifespans, in the national and international consciousness.

"I get a little worried, however," he continued, "because sometimes I hear people my age, and I'm in my 60s now, say, 'Well, it's up to the next generation to solve this problem.' Which seems ignoble and it also seems impractical. Because however intelligent and however idealistic and however energetic you are, you lack the structural power to do this by yourselves. You need older people, too."

McKibben, the founder of the global grassroots climate advocacy group 350.org, which has led international protests and fossil fuel divestment campaigns, said that young people bring energy and "a moral authority" to the crisis of climate change. But older generations, like those over 60 who are part of his new "Third Act" campaign, he added, can augment that with financial and political power accumulated over the course of a lifetime — with baby boomers and the Silent Generation together accounting for 70% of the nation's financial assets.

"You know what old people do? Old people vote. ... So if you want to take on Congress or you want to take on Wall Street, it's a good thing to have some older people backing you up," he told the crowd of mainly teens and 20-somethings, urging them to encourage their grandparents to get involved.

"Once we've melted the Arctic, nobody has a plan for how we freeze it back together again. So we need action fast." 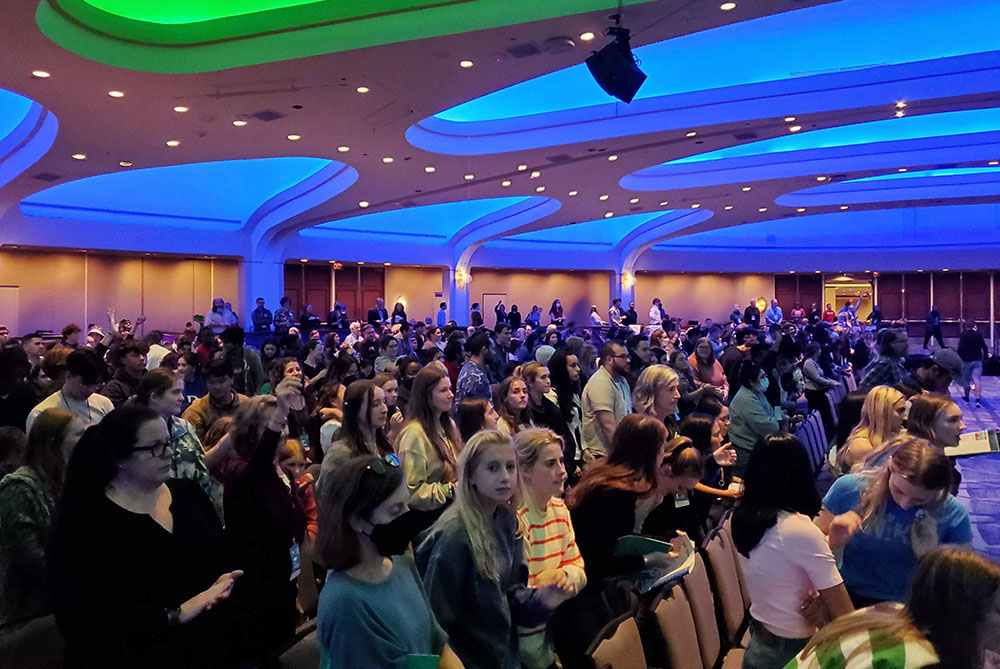 The audience for Bill McKibben's talk at the 25th annual Ignatian Family Teach-In for Justice on Oct. 22 in Washington, D.C. (EarthBeat photo/Brian Roewe)

McKibben, a contributor to The New Yorker and author of more than a dozen books, including his latest, The Flag, the Cross, and the Station Wagon, made the remarks during the opening keynote of the 2022 Ignatian Family Teach-In for Justice.

This year's Teach-In marked a quarter-century of the annual gathering, which emerged as a response to the murders of six Jesuit priests and two companions in El Salvador in November 1989. The gathering is considered the largest annual Catholic social justice event in the U.S.

After first bringing students to Fort Benning in Georgia to demonstrate outside of the U.S. Army School of the Americas — where soldiers involved in the Jesuit murders were trained — it relocated in 2010 to the nation's capital to focus on legislative advocacy. Two days of conference sessions were followed by many of the student groups heading to Capitol Hill to engage their members of Congress on the issues that matter to them, including immigration and the environment.

In his speech, McKibben connected climate change to increasing migration around the world, including at the southern U.S. border. He recalled that in 2020 the Atlantic experienced its largest hurricane season on record. That year, Hurricanes Ada and Iota caused extraordinary damage in Central America, destroying roads, bridges and farmlands and led many people to leave home and head north.

"I can't tell you what their legal status will be [when they reach the U.S. border], but I can tell you what their moral status is: They did not cause the problem that they're now suffering from. They release about one-fifteenth as much carbon as an American in the course of the year," McKibben, a Methodist, said. 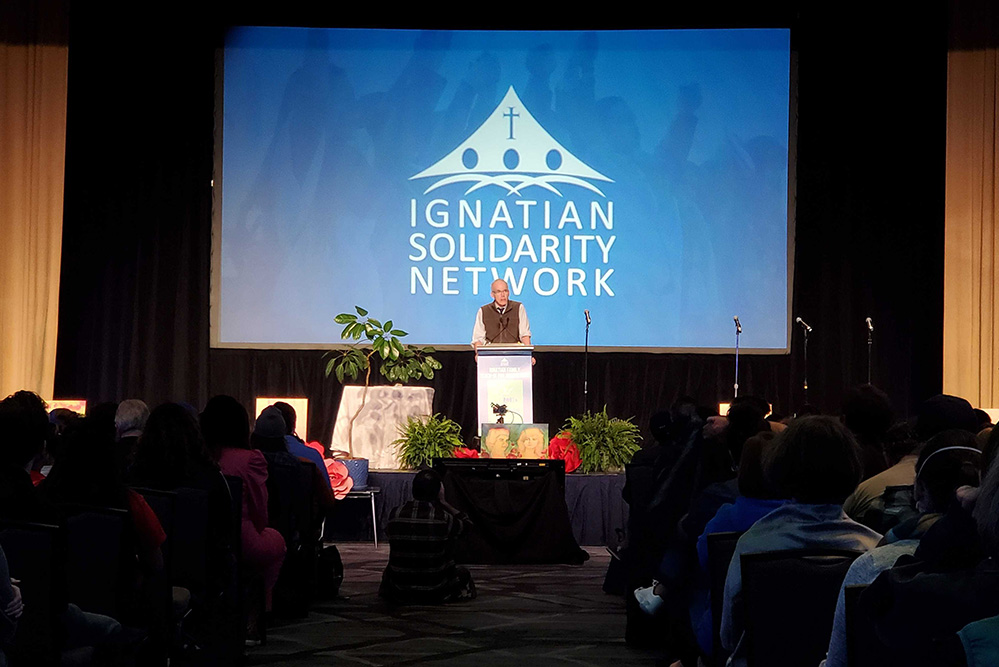 What separates climate change from other important political issues is its ticking clock, he said, so that even winning slowly can be a loss if critical and irreversible tipping points are surpassed that set in motion the most disastrous consequences from a warming world.

Already, average global temperatures have risen roughly 1 degree Celsius since preindustrial times, and many of the effects of climate change that scientists projected decades ago have begun manifesting, from extreme rainfall and stronger storms, to soaring temperatures, persistent droughts and massive wildfires. Scientists have stated that slowing global warming is still possible through massive reductions in heat-trapping greenhouse gas emissions this decade and reaching net-zero emissions by midcentury.

"That 1 degree is going to become 3 degrees Celsius, 5 or 6 degrees Fahrenheit, in the course of your lifetime. And if we let that happen, then we will not have civilizations like the ones we're used to," he said.

Offering advice to students, McKibben said in his earlier days he thought that scientists and writers providing data and evidence on climate change — that it was happening, caused by human activities and posed cataclysmic threats to the planet — would be enough to win the argument and sway leaders to take the necessary action. But he underestimated the role of money and power of the likes of the fossil fuel industry.

That revelation led him to pivot from writer to activist, and in 2009 he founded 350.org with seven college students at Middlebury College in Vermont, where he still teaches.

Along with organizing major climate protests around the world, 350.org was a leading catalyst in the fossil fuel divestment movement that to date has seen more than 1,500 institutions, representing more than $40 trillion, shift finances away from fossil fuels. That includes many faith-based institutions, including seven U.S. Catholic schools.

Joseph Miscimarra, one of the leaders of Fossil Free Marquette and now with Jesuit Volunteer Corps Northwest, told EarthBeat that that group's successful effort to press Marquette University to divest would not have occurred without support from organizations like 350.org and the Catholic Divestment Network.

"350.org gave a full guide online with how to start a campaign, how to tell stories, how to recruit people, how to center people who are most affected by climate change," he said.

While President Joe Biden recently signed into law more than $300 billion to address climate change — the largest such investment in the nation's history — McKibben predicted further action from Congress won't come anytime soon, especially if Republicans take control after the November midterm elections. That will turn attention to state and local governments, as well as the financial institutions that continue to fund fossil fuels. 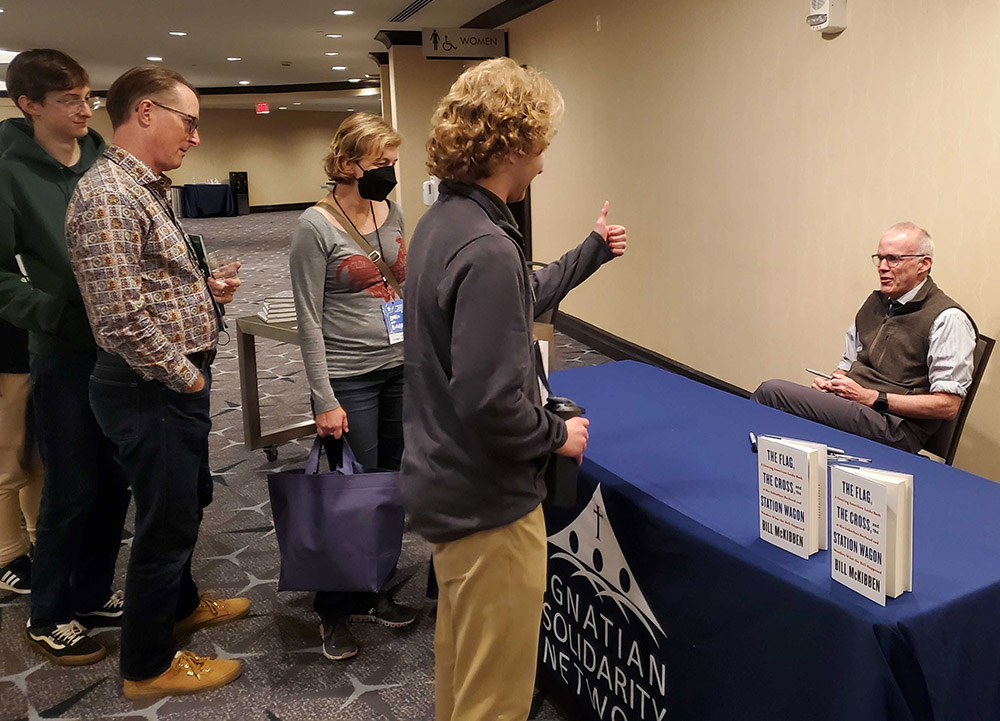 During a follow-up breakout session with more than 200 people, McKibben responded to a question about how he avoids burnout and exhaustion in climate advocacy by encouraging everyone to spend time outdoors. "It's a good reminder of why we do the work," he said.

Samantha Castro, a freshman at St. Peter's University in Jersey City, New Jersey, appreciated McKibben's focus on older generations alongside her own.

"I feel like we're constantly pulled to go and call to action," she told EarthBeat.

"So often we see younger generations taking the lead and leading the charge on everything related to climate justice," he said. "So I'm glad that he, as someone of an older generation, is imploring other people his age to follow our lead."