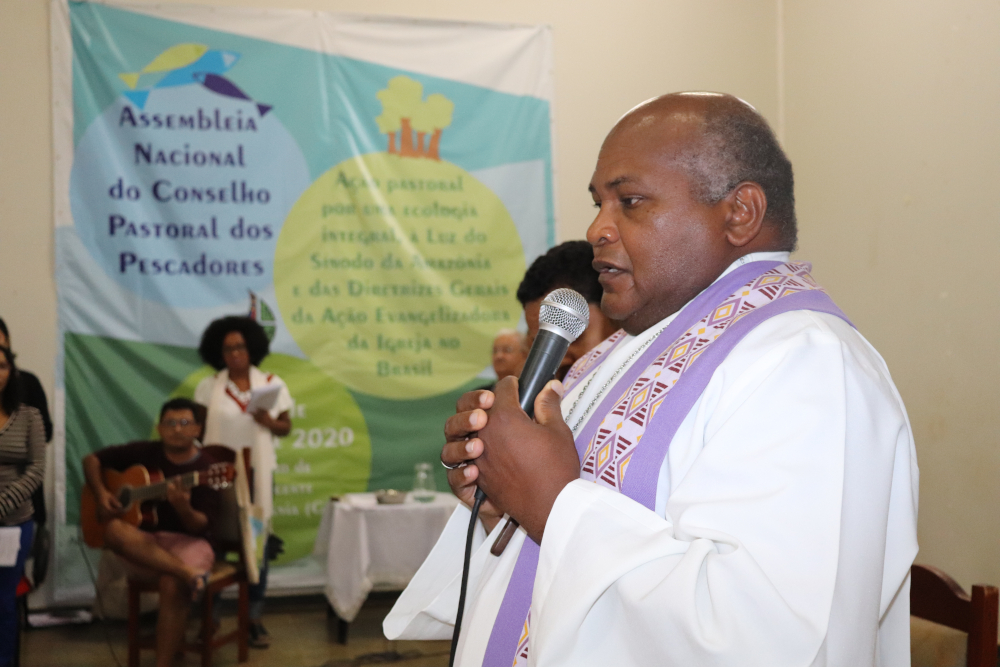 Bishop Jose Santos Mendes of Brejo, Brazil, speaks to Catholics in this 2017 photo. Bishop Mendes is a leader in the "Life by a Thread" campaign, which strives to give more visibility to environmental threats and to use "Laudato Si'" and the Synod of Bishops for the Amazon as a guide. (CNS/courtesy CPP/Ingrid Campos)

With the objective of giving more visibility to the increased violence against those who defend social and environmental rights, Brazil's Catholic Church has launched the "Life by a Thread" campaign.

"There have been verbal threats in person, over the telephone, over the internet, and people have even said there have been attempts on my life, but I guess they were subtle because I did not notice anyone was trying to hurt me," Sr. Marie Henriqueta Ferreira Cavalcante, a member of the Sisters of Charity, told Catholic News Service.

Cavalcante, who is also the coordinator of the Brazilian bishops' justice and peace commission, has a major role in the fight against human trafficking in the Amazon region.

"The trafficking network has a very large capillarity, there is a lot of diversity in the network," she said about the threats to her and her group while they try to help young people, especially girls, who are lured into prostitution and slave-like conditions.

The "Life by a Thread" campaign was scheduled to be launched in March but had to be postponed because of the advancement of the new coronavirus. Trips were suspended and the training seminar was transferred to a virtual platform.

One of those leading the campaign is Bishop Jose Santos Mendes of Brejo, president of the Brazilian bishops' social action commission.

He said the campaign seeks to promote and strengthen nonviolent mechanisms for the defense and self-protection of communities and leaders threatened; denounce at national and international levels the spread of the culture of hatred, threats and impunity, as well as the recent policies to dismantle the rights acquired by peoples and communities; and defend and promote effective public policies to protect communities and leaders threatened.

Data from the bishops' Pastoral Land Commission shows that from 1985 to 2019, nearly 2,000 people were murdered in the rural regions of Brazil, but only 122 cases were tried. The number of indigenous leaders killed in conflicts in 2019 was the highest in at least 11 years, commission data shows.

Mendes said the first area of focus will be the Amazon.

The campaign has a direct link to Pope Francis' "Laudato Si'" encyclical as well as last year's Synod of Bishops for the Amazon, said Mendes.

"Integral ecology in the defense of the traditional peoples," Mendes said to describe the connection between the "Life by a Thread" campaign to "Laudato Si'."

This is the first concrete action taken by Brazilian bishops since the synod. Mendes said the reality of threatened communities and leaders was one of the claims that stood out in the multiple consultations held in the region.

"We listened to 200,000-300,000 people when we were preparing for the synod," he said. "What we heard from many of them was 'We are being threatened.' That is why the urgency to start in the Amazon region."

For Cavalcante, the campaign starting with the Amazon region is fitting.

"The number of people around the region being threatened is very large, especially those who are fighting to save lives and nature," she said.

Although there are currently many Catholic groups and nongovernmental organizations working to try to keep those threatened alive, Cavalcante welcomed the campaign, saying, "When our work receives support, it receives visibility, a support mirror."

"It shows we are annoying and pressuring someone," she said.