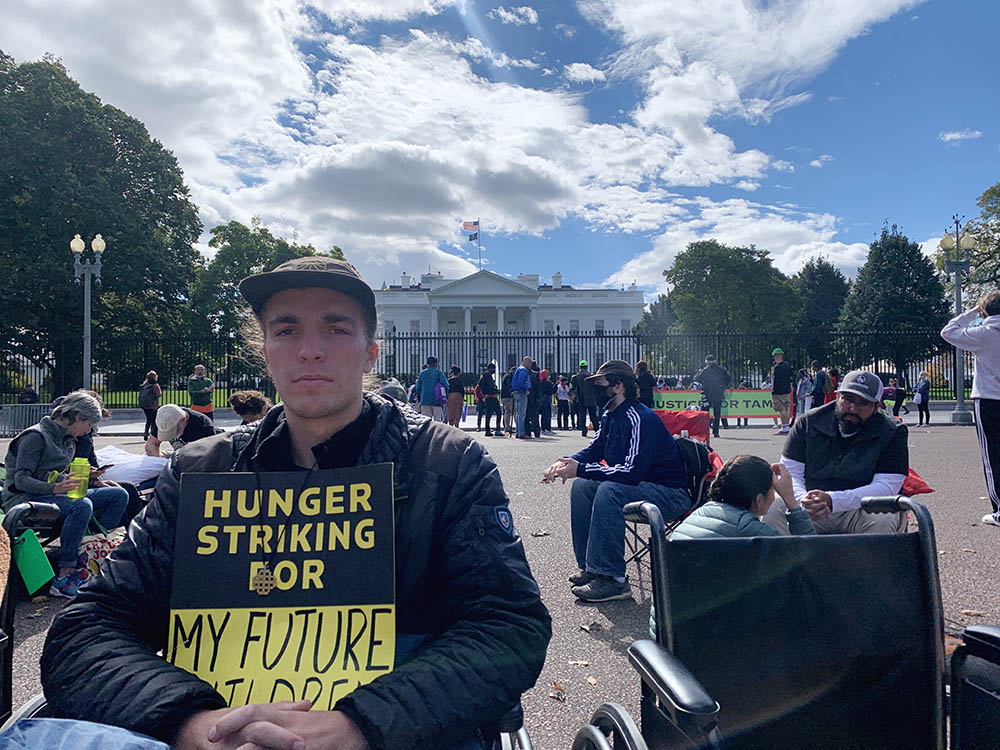 Paul Campion, 24, and four other members of the climate-activist Sunrise Movement have been on a hunger strike outside the White House since Oct. 20, demanding that the Biden administration and congressional Democrats deliver on the climate-related legislation currently before Congress.

A native of Silver Spring, Maryland, Campion studied environmental science at Loyola University Chicago. Inspired by the Sunrise Movement's dedication to fighting for a Green New Deal, he launched the group's Chicago hub, and says he has been "organizing with full heart and spirit ever since."

This interview, conducted Oct. 26, has been edited for length and clarity.

NCR: What role does your Catholic faith play in your life?

Campion: It's really important to me. I grew up in a Catholic family, going to parochial elementary and middle school. I went to Gonzaga College High School, a Jesuit high school [in Washington, D.C.], and a Jesuit university. Ignatian spirituality and my Catholic faith [are] at the core of who I am, my values and how I live my life. Today, I live in a Catholic Worker house in Chicago. It's at the center of everything. I live, work and breathe it.

Why did you start this hunger strike?

I grew up in a big family, five kids, and we would have family dinner together every night. [When I was] in middle school, there was a day my dad didn't take a plate of food, and I was a little surprised. He's got a killer metabolism — he eats a lot of food.

So I asked him, "Dad, why aren't you taking some food tonight?" And he said it was Ash Wednesday, and that he was fasting as a part of entering the season of reflecting on how he was building a loving world through his actions and his life. Growing up, I remember hearing the readings about Jesus spending 40 days in the desert in a fast, so those stories and that practice and tradition [were] introduced to me through my faith.

[Several of the hunger strikers] have spiritual or religious backgrounds. ... Last week, we were seeing how Biden was just not fighting for his own agenda, not fighting to deliver the climate legislation that we need to save our lives and have clean air, clean water and a good future. And a few of us were reflecting on what else can we do? [We had] a real sense of the urgency and the magnitude of the moment. And we were reflecting that a hunger strike might be a tactic.

For me, it was something familiar, because I've done one-day fasts for faith reasons. It was scary to contemplate and to say, "I think I can do this. I think we can do this. It's worth our trying". [I was] also inspired by [the] history of MLK and Gandhi. We felt like it was something we could take on, and we'd be stepping into that history, that legacy, too.

How does your faith sustain you in this hunger strike?

It's really hard to do a hunger strike. I'm really hungry. I would love if they met our demands today, and we could go eat tomorrow or this evening. [My faith has] shown up in a few ways for me. I've been carrying this Kairos cross with me, and it's a reminder for me that God is in all things and this is God's time. I'm bringing my full self to that.

And we've done some morning reflections and groundings. Some friends have sent me prayers and meditations. And I've been doing some reading at night. All of that has been helpful and [has helped me feel] connected, as opposed to disconnected and isolated.

What would you say to President Joe Biden, who is also Catholic, right now?

[West Virginia Sen.] Joe Manchin is also Catholic, and [so is House Speaker] Nancy Pelosi. And I know that each of us have heard so many times in our lives the Beatitudes: Blessed are those who hunger and thirst for righteousness, for they will be satisfied. Blessed are the peacemakers.

Biden, I know that I've never heard blessed are those who failed to deliver on their climate justice promises or who let Joe Manchin and his fossil fuel money gut their climate plans at the expense of so many people and so many lives on the line.

And I would ask them to dig deep into their conscience and really think about the choice that they have and what is their faith and their conscience calling them to do? And if they really wanted to get into it, we could pull out Laudato Si' and talk all about it. But I think I would just challenge them. 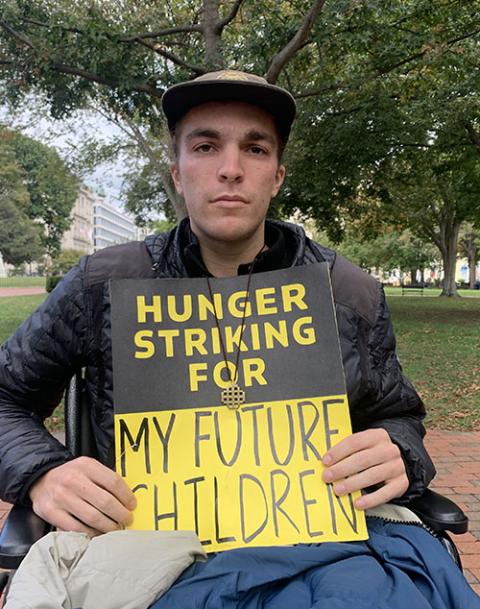 What do Laudato Si' and Pope Francis mean to you?

I was graduating high school in 2015, when Laudato Si' came out, and my relationship with the hierarchical church is complex, as is everyone's. But Laudato Si' was pretty inspiring, because it laid out a much different vision for what it could look like for us all to live here together on our common home. ... The integral ecology that Francis talks about is really about how we are living together in relationship with one another and with our communities and with everything.

It means a radically different distribution of wealth, it means a radically different distribution of how we power our lives, so I was pretty inspired by it. It was finally something that I felt like I could resonate with, that was coming from the top. I was also discerning for myself what I was going to study in college. It was that, amongst a bunch of other things, [that] led me to reflect on how [do] I want to study? Who do I want to be? What do I want to do?

So I chose to kind of start jumping in and learning about the climate crisis. I studied environmental science in college, as I thought that might be the best way to learn about it, and started organizing on my campus around renewable energy. I chose to go to Loyola, [which] had an Institute of Environmental Sustainability and a climate action plan in part informed by Laudato Si', so it felt like a place where I could be impactful and learn, grow in my values and in living them out within a context that would be supportive.

What would your message be for fellow Catholics?

My broader message would be to really sit with one of the core questions that has been really helpful for me: Where are the deepest desires of my heart meeting the deepest needs of the world? And how can I live that each day, particularly around climate and this fight right now?

My other challenge to Catholics would be to get involved and get active. Politics can seem disconnected or can seem like a different world, but it bears down to who has decision-making power and who they're using it for. My whole life, there [have been] so many people in decision-making power who have, by and large, been using it for the wealthy and the few, instead of fighting for all of us.

Together, we have a lot of power, and organizing your community and organizing with your church and with your family and your friends to fight for and make real the changes that we need in society, to benefit each of us and our neighbors, is a really important way for us to live out the call and the example that Jesus laid out for us when he walked with us.