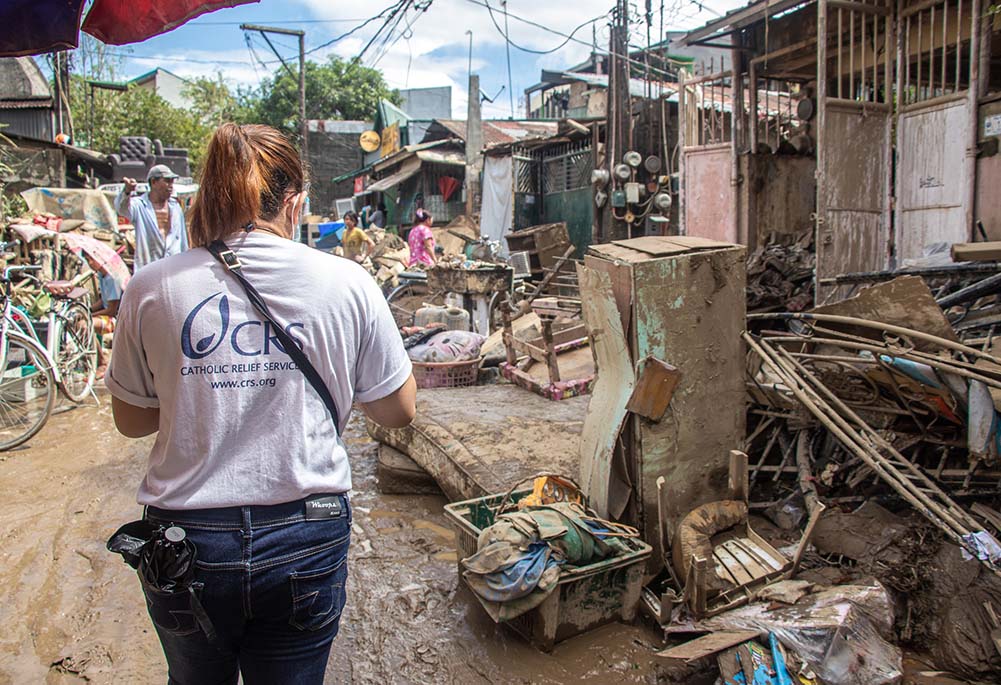 The mountainous village in northern Ethiopia where Yohannes Subagadis lives looks far different today than when his father, grandfather and ancestors farmed it for generations.

What were once beautiful landscapes of trees and grass along steep slopes dissected by rivers and streams has become a region stricken by increasing and severe droughts and floods that wash away nutrient-rich soil, and with it a critical lifeline for the agrarian community.

"When climate change meets poverty, as it has in the Horn of Africa, it is a kind of perfect storm of challenges," Subagadis, Africa coordinator for livelihoods and landscapes for Catholic Relief Services in East Africa, said during an Oct. 4 press conference launching a new CRS climate action initiative.

The Horn of Africa, among the regions most vulnerable to climate change, is heavily reliant on farming, with 3 in 4 people living in poverty, dependent on agriculture and natural resources for their survival. The worst drought in 40 years has pushed nations like Somalia on the brink of famine, with 22 million people in the region at risk. Worldwide, upward of 100 million people could be pushed into poverty by 2030 if accelerated actions to limit climate change aren't taken, according to the World Bank.

It's those real-life impacts of a warming world in Subagadis' village and elsewhere that CRS, the U.S. church's international humanitarian and development organization, aims to lift up with its "One Planet, One Family" campaign to engage U.S. Catholics more fully on the issue of climate change. 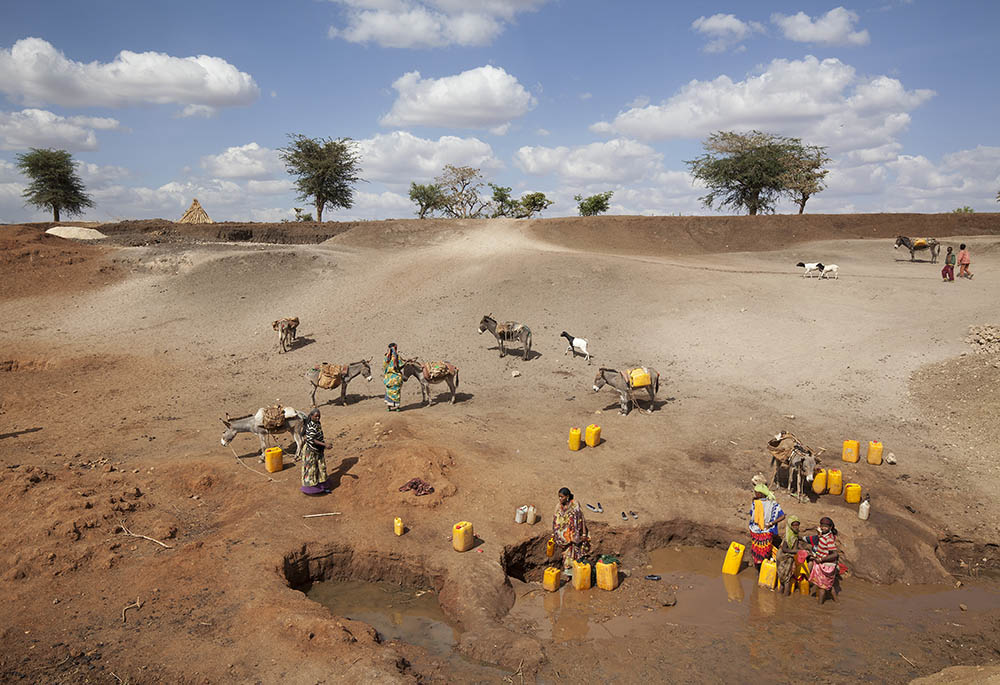 Women search to collect water in Ethiopia's Oromia state, where the in 2016 worst drought in 50 years left rivers and lakes completely dried out. A CRS project in the region works to enhance adaptation to climate change. (Catholic Relief Services/Petterik Wiggers)

The effort seeks to educate Catholics more about climate change, how it is severely impacting people today and is expected to only worsen in years to come without substantial reductions in heat-trapping greenhouse gas emissions and steps to enhance resilience to a changing climate. It is part of the wider Caritas Internationalis "Together We" multiyear global campaign asking Catholics to take actions to combat poverty and conserve nature in the spirit of integral ecology and solidarity that are key themes in Pope Francis' encyclicals Laudato Si' and Fratelli Tutti.

The campaign provides prayers alongside tools and resources to lobby elected officials for more aggressive climate responses — such as increased payments for the international Green Climate Fund — as well as fundraise for communities facing floods, heat waves and droughts right now.

It is also asking dioceses to encourage people to take part, and developing resources for priests to engage conversations on climate change, as well.

"We still can do something to help our fellow human beings adapt to this changing reality," Bill O'Keefe, CRS executive vice president for mission, mobilization and advocacy, said during the Oct. 4 press conference. He said it was a "really significant day in the history of CRS."

"I'm not exaggerating when I say that everywhere [in the 110 countries] CRS works, when you talk to farmers they will tell you that the climate has changed out from under them," he said.

Agricultural techniques and crops in place for generations are less effective and reliable, he said, while rain patterns have shifted and become more irregular. That's the case in Guatemala, said Lheslye Pérez, CRS chief of party in the Central American country, where unpredictable rains have been accompanied in recent years with destructive tropical storms.

CRS teams have also observed how climate change is exacerbating hunger, migration and violence, including in Burkina Faso in Africa's Sahel region, where a political coup broke out at the end of September.

The summer of 2022 has seen a wave of extreme weather, from severe drought in East Africa, historic flooding in Pakistan, relentless heat waves and wildfires in Europe and the U.S., and massive hurricanes in the Caribbean. In many cases, scientists have said that increasing global temperatures have contributed to the intensity of such events.

With the campaign, CRS is looking to tap into what they believe are high levels of concern among U.S. Catholics and a majority of Americans about climate change both domestically and abroad, according to results of a survey it commissioned. 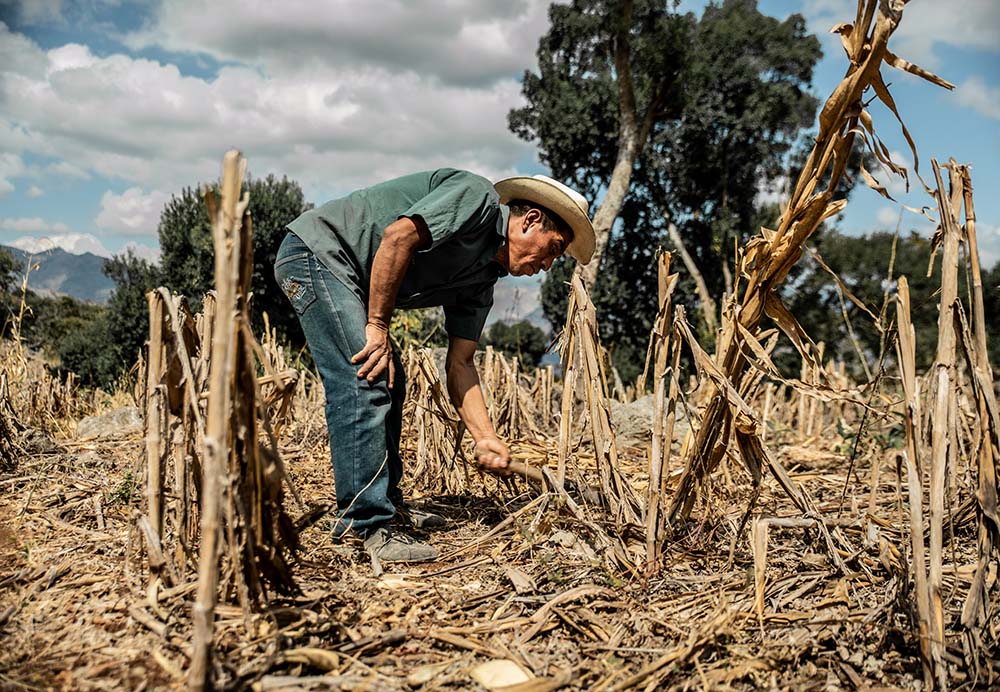 Silverio Mendez tends to a field in this 2019 photo in Barrio El Cedro, Chiquimula, Guatemala, part of a region known as "the dry corridor" due to extended droughts. Catholic Relief Services has worked with him and other farmers to use cover crops as a means to improve soil quality and its ability to hold moisture. (Catholic Relief Services/Julian Spath)

The survey, conducted in August among 2,009 adults by New York-based research firm Big Village, found 81% of Americans overall were somewhat or very concerned about climate change's impact in the U.S. and 75% concerned about impacts in other countries. In both cases, Catholic concerns were even higher (85% and 78%, respectively).

Three in 4 Americans in the poll somewhat or strongly agreed that immediate actions are necessary to limit the impacts of climate change in the U.S., with 69% saying the same for other countries. More than half of U.S. adults felt the country has a responsibility to help other nations on climate change.

In both cases, concern about climate change and support for doing something about it were highest among young adults and Hispanic and Black respondents. Gen Z respondents were 12 times more likely than other generational cohorts to express fear about the impacts of climate change in open-ended responses.

Catholics were five times more likely to view climate change as a shared responsibility compared to non-Catholic respondents. In terms of what the U.S. can do, Americans in the survey listed reducing emissions and helping people adapt to climate change as their two priorities.

The survey carried a margin of error of plus or minus 2.2 percentage points. 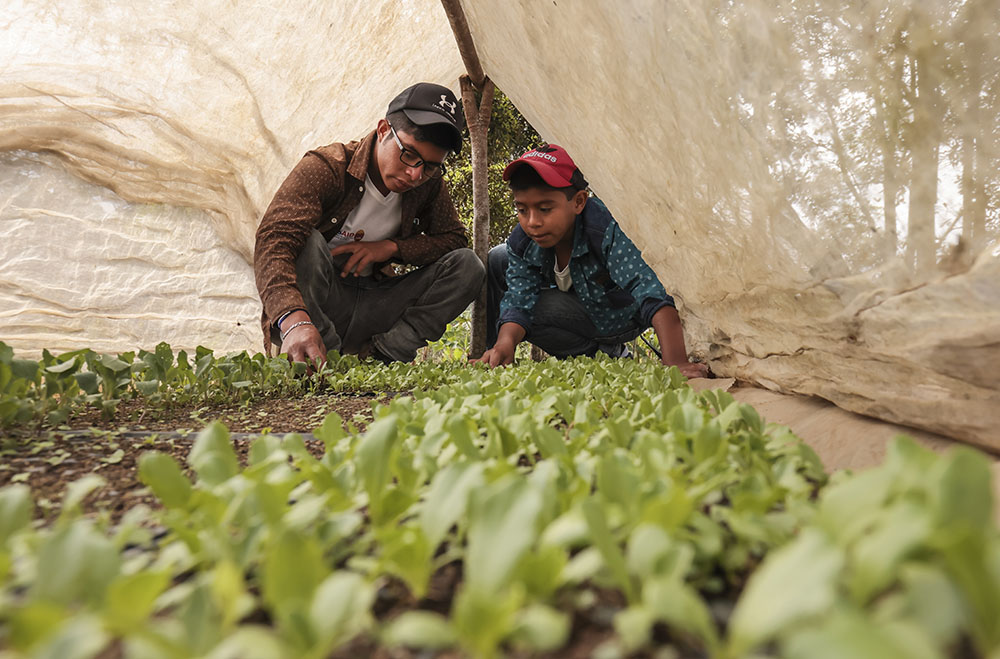 Part of the CRS climate campaign aims to educate more people about the ways it is working to assist communities around the world to adapt to climate disruptions in their region and to become more resilient when storms, droughts and extreme weather arrive. Interventions include climate-smart agriculture practices, water conservation and storage, and helping families and schools grow their own food.

In Ethiopia, along with helping to provide food and water to meet pressing needs, CRS is also developing climate adaptation programs, such as an early warning system for farmers of forecasted dry spells or droughts, to allow them to prepare and adjust crops, for instance from long-cycle to short-cycle varieties.

Subagadis called the program "really lifesaving for the millions of families who rely on the land to earn a living" in the Horn of Africa, where for many "the slightest change in the weather can mean life or death."

Another facet of the CRS campaign is advocacy, where a main focus is the Green Climate Fund — a United Nations program where wealthy nations, including the U.S., pledged to commit $100 billion annually by 2020 to developing countries to assist with climate mitigation and adaptation measures. Those pledges have fallen short and the target date has been pushed to 2023, while funds for adaptation so far (roughly $20 billion) are half of promised levels. 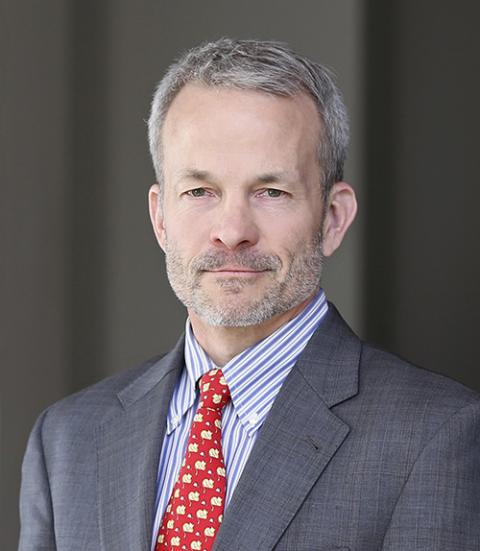 "There's a long way between what's being provided and what the needs are going to be," O'Keefe said.

CRS has also supported the Global Food Security Act, which was included in the House reauthorization bill and is being considered in the Senate, and succeeded in getting language around climate-smart and nature-based agriculture in the bill.

Looking toward the COP27 United Nations climate change conference, set for November in Egypt, CRS will be sending representatives and working with other Caritas chapters to advocate for world leaders to provide "loss and damage" compensation to countries already impacted by climate-fueled disasters.

The climate attitudes survey found that while more than half of Americans reported taking steps like recycling and reducing water use to lessen the impact of climate change, less than 1 in 5 said they supported an organization working on climate change or had joined a group action. Each of the actions were more common among Catholics, and especially young Catholics.

CRS officials are hoping to build off that and create new momentum through their new campaign by offering U.S. Catholics and others who have taken small steps to limit their environmental impact to generate more substantial, mass responses to climate change.

"That's really the opportunity of this campaign," O'Keefe said, "to take this passion and commitment to doing something, and helping people to take more concrete, meaningful, collective responses that will really impact the core problem."