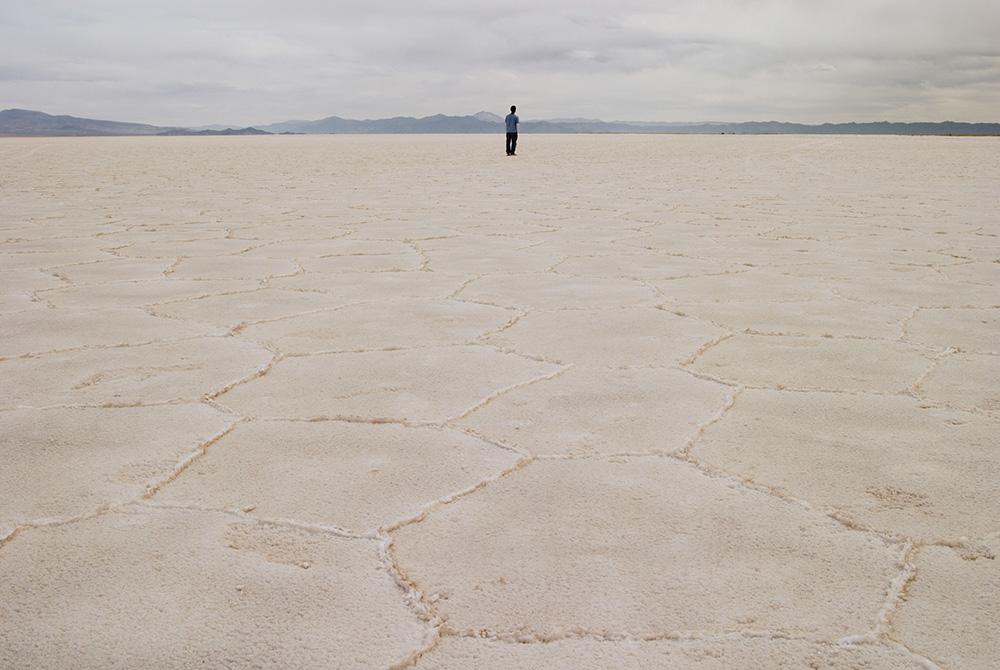 A person stands on the salt flat Salar de Arizaro, in Salta province, Argentina. In Salta and Jujuy provinces, Indigenous communities, whose livelihood depends on the extraction of salt from great deposits, oppose lithium mining, which directly impacts their existence. (Newscom/Tetra Images/Roberto Westbrook)

Catholic church leaders in Argentina are speaking out against several high-impact projects involving mining, fossil fuels and industrial use of water in the South American country. Although they say President Alberto Fernández has shown more willingness to discuss such issues than former President Mauricio Macri, they oppose what they call the persistence of a predatory economic model.

Since his inaugural speech in December 2019, Fernández has repeatedly mentioned Pope Francis' 2015 encyclical "Laudato Si', on Care for Our Common Home" and has employed some of its terms, such as "common home," on different occasions.

He also has taken concrete measures, such as restoring the Environment Ministry, which Macri had downgraded to a secretariat, and he has defined the fight against climate change as one of his top priorities.

"But several endeavors, some of them involving environmental violations, have been allowed to go on or were even incentivized by the government," said Claudia Huircan, a coordinator of Justice, Peace and Integrity of Creation for the Claretian Missionaries in Argentina, Chile, Paraguay and Uruguay.

One effort opposed by the church is a bill introduced by Congressman Omar Félix, an ally of Fernández, which would reduce the proportion of biofuels in the fuel sold in the country. 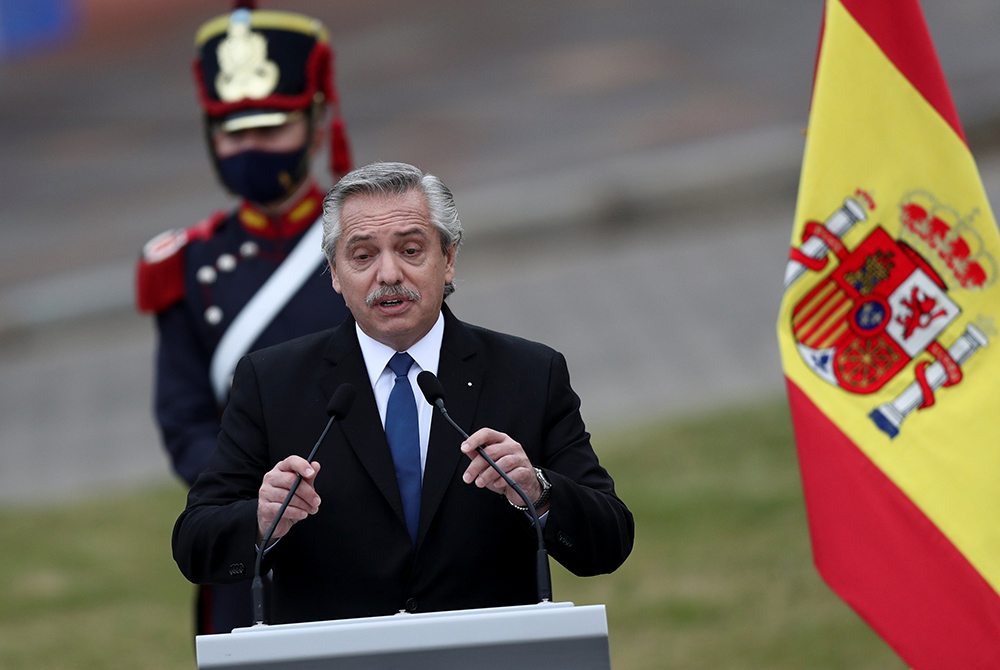 A law established in 2006 established that at least 5% of vehicle fuel sold in the country must be biofuel, but the percentage has been raised since then to 12% for gasoline and 10% for diesel. The new bill would reduce the proportion of biofuel to 5% again, allowing it to drop to 3% if biofuel prices caused an excessive increase in overall fuel prices. Between 5% and 7% of Argentina's sugarcane, corn and soy currently goes to biofuel.

Félix, who leads the Chamber of Deputies' Energy and Fuel Commission, told reporters that he fears that high international prices for corn and soy could lead to increasing fuel prices in Argentina, spurring a general rise in costs and inflation.

The Argentinian bishops' lay-led Justice and Peace Commission published a letter June 1 on the importance of biofuels and criticized Félix's bill, saying that it would cause "a direct regression in Argentinian environmental policy."

The document emphasized that Argentina signed the Paris Agreement and has committed to progressively moving away from the use of fossil fuels for transportation.

"I believe our letter has generated an interesting debate. We have been talking to Félix and other congressmen and their teams. Everybody agrees that the proportion of fossil fuels should be reduced," Humberto Podetti, president of the Justice and Peace Commission, told EarthBeat.

He said he still thinks the bill can be changed before it is approved by Congress. "We felt a good spirit of collaboration between the church and the government," he added.

The commission calls for biofuels to be produced sustainably, without using pesticides and prioritizing products that couldn't be used to feed animals or people, such as sugarcane bagasse.

But despite the current administration's apparent willingness to improve legislation, he said, there are constraints on government decisions.

"The government has to pay its foreign debt, so it needs foreign currency, which it gets by exporting monoculture products," such as soy and corn, Podetti said. "The international finance system impedes many governments from applying Pope Francis' principles concerning the environment." 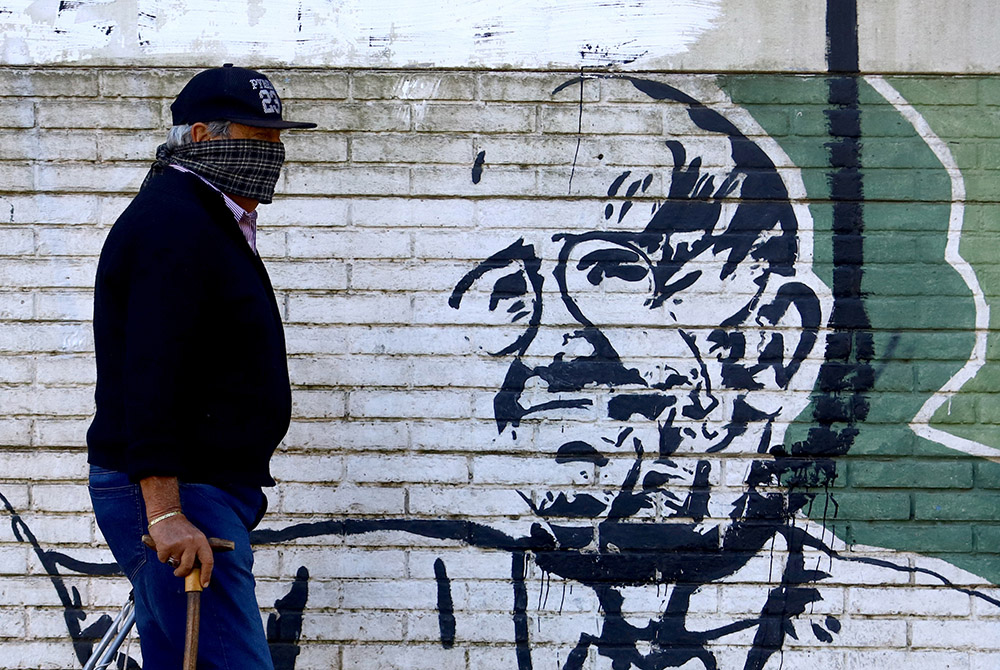 A man wearing a scarf as a protective measure against COVID-19 walks past a mural depicting Pope Francis on Easter, April 12, 2020, in Buenos Aires, Argentina. (CNS/Reuters/Matias Baglietto)

Huircan of the Claretians, who is also a member of the Argentinian team of the Churches and Mining Network, argues that in countries like Argentina, governments tend to side with big corporations, which manage to keep their power regardless of the ideology of the current national administration.

In her home province of Chubut, in Argentina's southern Patagonia region, Catholic groups have joined Indigenous and environmental movements in the struggle against a regional bill that would establish so-called "sacrifice zones" — areas where large-scale mining projects could be developed.

Chubut's meseta, where the "sacrifice zones" may be created, is a vast area of semi-arid, sparsely populated tablelands with just a handful of towns and villages. Many are communities of Indigenous Mapuche-Tehuelche people, who traditionally raise sheep, and who consider the meseta part of their sacred land.

"The local communities have been rejecting any kind of mining in Chubut since 2000," Huircan said. A law passed in 2003 banned open-pit mining in the province, but legislators added a loophole at the last minute. As a result, if the zoning bill is approved, Canadian-based Pan American Silver Corp. may soon be allowed to develop its Navidad project, considered one of the world's largest undeveloped silver deposits.

The deposits are located in an area covering about 38.6 square miles. A company executive has said the Navidad project's "footprint" would cover about one-tenth that area, but a company technical report indicates that Pan American Silver, through its Argentinian subsidiary Minera Argenta, has its eye on a total area in the region that is about six times the Navidad project's size.

According to a report by scientists at the state-run National Scientific and Technical Research Council's Centro Nacional Patagónico, the mining project would threaten the Chubut province's water supply. Large underground water reserves have been discovered in the meseta, and authorities have admitted that they lack the ability to monitor water use in the region effectively.

Since the local government began to move the project forward, the church has become more outspoken in its opposition. In January, Bishop José Slaby of Esquel, Archbishop José Gimeno Lahoz of Comodoro Rivadavia and two of his auxiliary bishops published a letter in which they criticized the speed with which authorities were trying to approve the bill.

"We propose that every change in the use of natural resources in the province must result from discussion that includes all social actors, and we recommend as a mandatory condition that a social license be achieved before a bill is introduced to the legislature," the document read.

"Social license" is a term used in many Latin American countries to indicate that a company has the surrounding communities' consent to go ahead with a project, although it often is not clear what constitutes such a license.

In the letter, the bishops expressed concern for the rights of Indigenous communities in the area. Several Mapuche-Tehuelche groups live in the region and most of them have consistently rejected the mining plan. Two small communities, Gan Gan and Gastre, would be directly affected, but the potential impacts on the aquifers and the Chubut River are unknown.

Four local communities, accompanied by the bishops' national Indigenous pastoral team, filed a complaint against the bill introduced in Chubut, arguing that the Indigenous groups had not been consulted about the project. A judge ruled in their favor in May, halting the approval process, but on June 15 an appeals court overruled the lower court's decision on technical legal grounds.

"The situation now is uncertain. All communities are mobilized, waiting for the moment when the bill will be sent to the province's Congress," Huircan said.

The Indigenous groups fear possible environmental impacts, especially on the region's scarce water sources. Their concerns are not without grounds. In northwestern Argentina, high in the Andes Mountains, several mining projects have been harshly impacting ecosystems and traditional peoples, Rosa del Valle Aráoz, a Catholic activist and member of the Churches and Mining Network, told EarthBeat.

"Along with Bolivia and Chile, we form the so-called lithium triangle. The lithium mining has been breaking a delicate ecosystem balance," Aráoz told EarthBeat.

Lithium — which is a key component of batteries in "green" vehicles, such as electric cars — is mined from beneath salt deposits on a high Andean plain spanning parts of the three countries. But environmentalists say the toll it takes on the environment and surrounding communities is anything but "green."

In Argentina, the mining dried up a local river in the Catamarca region Aráoz said, adding, "It's a region with limited water resources. People had to leave."

In neighboring Salta and Jujuy provinces, some 30 indigenous communities whose livelihood depends on the extraction of salt from great deposits oppose the lithium mining, which directly impacts their existence. Those communities have traditionally extracted salt in the region for centuries, trading it with other villages for needed goods.

"They have been fighting against mining, but they don't have media visibility. Repression is fierce, and activists are continually arrested and sued," Aráoz said.

International mining companies are now trying to expand their operations to a zone in the south of Catamarca, but she said environmental impact studies have not been available to the communities.

"Lithium is seen as a white gold, the material that will lead the process which is falsely called 'energy transition.' But electric cars moved with lithium batteries are not 'clean.' We've been destroyed [by mining] for 500 years," Aráoz said.

Conflicts over extractive industries in Argentina have been increasing since 2018, with communities opposing fracking for oil and gas in General Alvear, in Mendoza province. The following year, thousands of people protested in the city of Mendoza against the use of cyanide in mining. There have also been protests in Catamarca, Chubut and other regions of Argentina.

"There's a great awareness in society of the need to protect the environment, but Latin American countries often are unable to take the necessary measures alone," Podetti said. "We need to join forces to negotiate with the international community and face together the challenges of poverty and sustainable development."

A version of this story appeared in the July 23-Aug 5, 2021 print issue under the headline: Catholics in Argentina speak out against mining and other extractive industries.