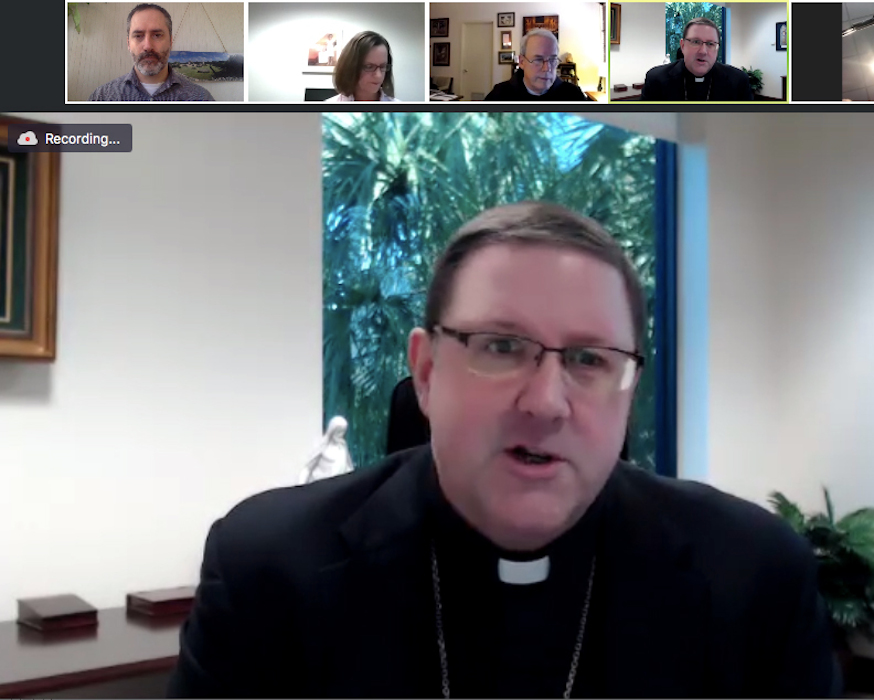 Bishop Gregory L. Parkes of St. Petersburg, Fla., is seen May 13, 2020, in an online discussion about pro-life responses to the coronavirus, other current and future disease outbreaks, and climate change. (CNS/courtesy In Solidarity)

The global response to the coronavirus pandemic provides a lesson for humanity on the importance of unifying in response to worldwide crises, including climate change, Catholic and evangelical clergy agreed during an online discussion.

The pathway to respond in both situations can be found in Pope Francis' encyclical, "Laudato Si', on Care for Our Common Home," said all four clergy in the discussion.

"We don't often think of climate change as a pandemic, but it is," said Franciscan Father George Corrigan, pastor of Sacred Heart Church in Tampa, Florida.

"Simply, put 'Laudato Si'' offers a framework for our time. We're all connected whether we like it or not. ... What we do affects human flourishing at every level," he said.

The other Catholic participant, Bishop Gregory L. Parkes of St. Petersburg, Florida, said the response to both the pandemic and the climate crisis is rooted in defending the poor and building networks of respect.

"We're united in the challenges and we must work together for a solution," he said.

"I believe that God has the power to bring good out of even the most challenging and difficult circumstance. It is my hope and my prayer that through these difficult and challenging days, he will guide us to be more united, more compassionate and more charitable toward one another," the bishop said.

The hourlong discussion included leading evangelical voices in the environmental movement, who pointed to long-standing Catholic social teaching on the importance of serving the common good and the five-year-old encyclical as sources of inspiration in their work.

"We need to stand in solidarity. This problem is too big for any one faith group to address," said the Rev. Joel Hunter, retired senior pastor of Northland, a Church Distributed, which is based in Longwood, Florida. "Pope Francis has been a premier voice of solidarity and cooperation."

He recalled Genesis 2:15, in which God placed Adam in the garden of Eden "to cultivate it and keep it," as the foundation for human action to protect the environment.

Such trying times require clergy to build a sense of unity within their congregations and across religious denominations, said the Rev. Mitchell Hescox, president and CEO of the Evangelical Environmental Network. He called for greater collaboration among Catholics and evangelicals on climate change and other environmental concerns. 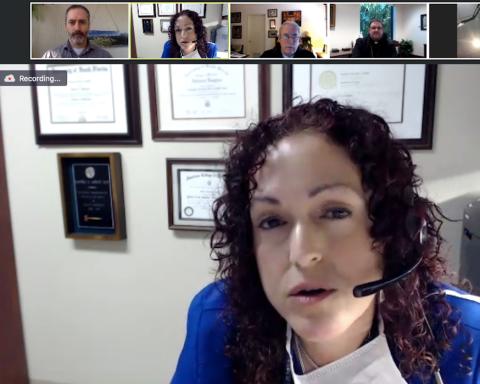 Sandra Gompf, associate professor of infectious disease at the University of South Florida College of Medicine in Tampa, Fla., is seen May 13, 2020, in an online discussion about pro-life responses to the coronavirus, other current and future disease outbreaks, and climate change. (CNS/courtesy In Solidarity)

"Catholics and evangelicals have some difference, but we have a lot more things in common than we do that keep us apart," he said. "We can keep working to see that future of what we can do together that we can't do apart."

The online event was organized by the Diocese of St. Petersburg and In Solidarity, a Catholic-run grassroots social activism movement. It was planned to mark the fifth anniversary of the landmark encyclical, which Francis signed May 24, 2015.

In advance of the theological discussion, participants heard from Sandra Gompf, associate professor of infectious disease at the University of South Florida College of Medicine in Tampa, Florida. She opened the event with an analysis of how a warming climate has been found to exacerbate the geographic spread of illnesses such as malaria, dengue, Lyme disease and Rocky Mountain spotted fever.

While it's too early to know how a warming climate may affect the future spread of the novel coronavirus that causes COVID-19, the patterns of how other diseases have spread in recent decades can alert the world of the relationship of climate change and human encroachment on nature to disease outbreaks.

In addition, she said, statistics gathered during the four months since the coronavirus is believed to have arrived in the United States show that the severity of COVID-19 in people depends in part on the quality of the air they breathe: the dirtier the air, the more severe the illness in some cases.

"That gives us perspective on climate change and global warming," Gompf said. "It's an important thing to address now."

In the face of the still-growing number of COVID-19 cases and the fluctuating daily death toll from the illness, Corrigan said clergy are challenged to bring hope to people who remain afraid of becoming sick and are uncertain about the future. He urged a return to Francis' words on the importance of unity and community.

"Pope Francis says you cannot give hope unless you have the smell of the sheep, or being close to the people," Corrigan said. "We're the ones who have to feed and nourish the people.

"As pastor, it is up to me to speak hope to that individual person's life. As pastors we certainly speak to the everlasting hope of the gospel of Jesus Christ. But hope is much more personal. ... It's being connected to people and bringing hope in their lives. It's never-ending."