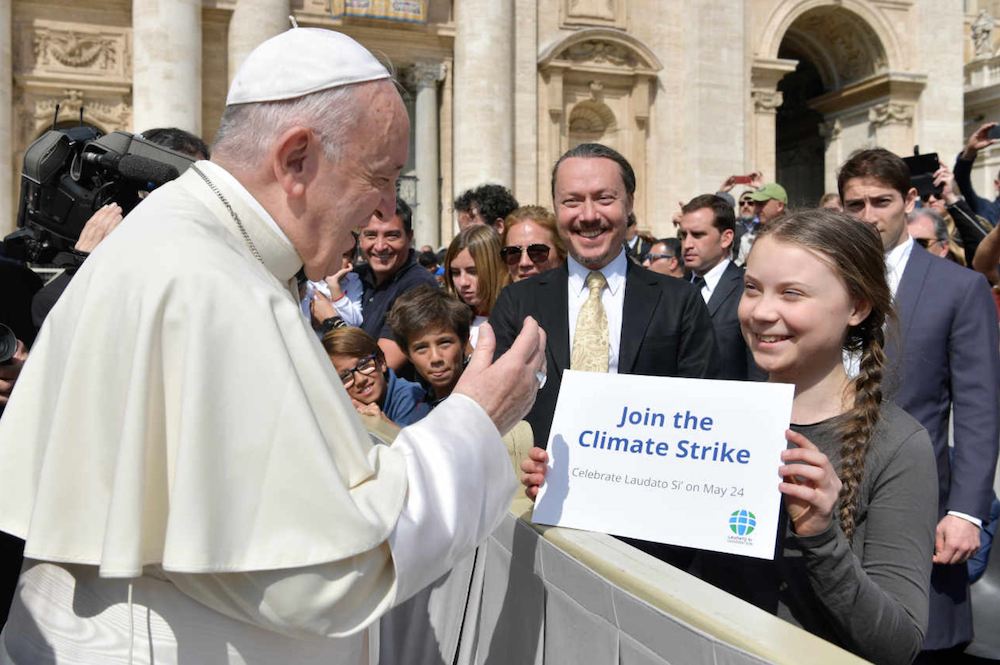 Despite Pope Francis' words in Laudato Si', millions of Catholics, including bishops, are ignoring the looming climate apocalypse and the individual and systemic conversion needed to address it.
Pope Francis greets Swedish teenage environmental activist Greta Thunberg at the end of his weekly general audience in St. Peter's Square April 17, 2019. (Vatican Media)

COVID-19 and global warming are enough to make me long for the days of clerical power and Catholic guilt. In those good/bad old days, the church's hierarchy was able to issue thunderous edicts and most Catholics would follow its directions like sheep. If the laity did not, they would feel guilty and fear going to hell.

The church used to have the power to make and break kings; the power to shape cultures and command people's actions. Too bad it does not have such power to save humanity from itself today.

Would that the pope could declare vaccine skeptics and climate-change deniers heretics and put their books, articles, Facebook pages and tweets on the Index of Forbidden Books.

This would be quite a change from the days when Galileo and Darwin were considered heretics. This time clerical power would be backing up science.

Nothing would give me more illicit pleasure than having the governors of Florida and Texas, along with the leaders of the oil and coal industries, excommunicated, just as kings and nobles were excommunicated in the past.

And rather than organizing crusades against Muslims, as it did in the past, the church could mobilize its people to protect the health of the Earth and humanity. But today, the children's crusade is led, not by the church, but by Greta Thunberg. Hopefully she will be more successful than the Children's Crusade of 1212, which ended in disaster.

There was a time when Christianity had the ability to do great things (some good, some bad).

We marvel at those Christians in the past who dug the foundations of great cathedrals, the completion of which they and their children would never see. The idea of taking on a project, like building a cathedral, that might take centuries to complete is incomprehensible to us.

"Millions of us are going about our business worrying about our daily lives while Catholic bishops and elites (myself included) argue about the Latin Mass, Communion for politicians and Grindr, rather than the coming climate apocalypse"

Pope Francis, in his 2015 encyclical Laudato Si', called the world to individual and systemic conversion to prevent the disaster that is quickly approaching. There are some who have responded, such as the Laudato Si' Movement (formerly known as the Global Catholic Climate Movement).

But millions of us are going about our business worrying about our daily lives while Catholic bishops and elites (myself included) argue about the Latin Mass, Communion for politicians and Grindr, rather than the coming climate apocalypse.

Francis is right. We need both individual and systemic conversion.

Our lifestyles must change, and our carbon-based economic system must change. We must turn the thermostat up in the summer and down in the winter. We must recycle and use less energy. But we also need government regulations and a carbon tax so that the entire economic system becomes less carbon dependent.

This will not be easy, but it must be done. The church has lost its clerical power, so I guess we will have to depend on Catholic guilt. But this time, the hell we face will be of our own making.