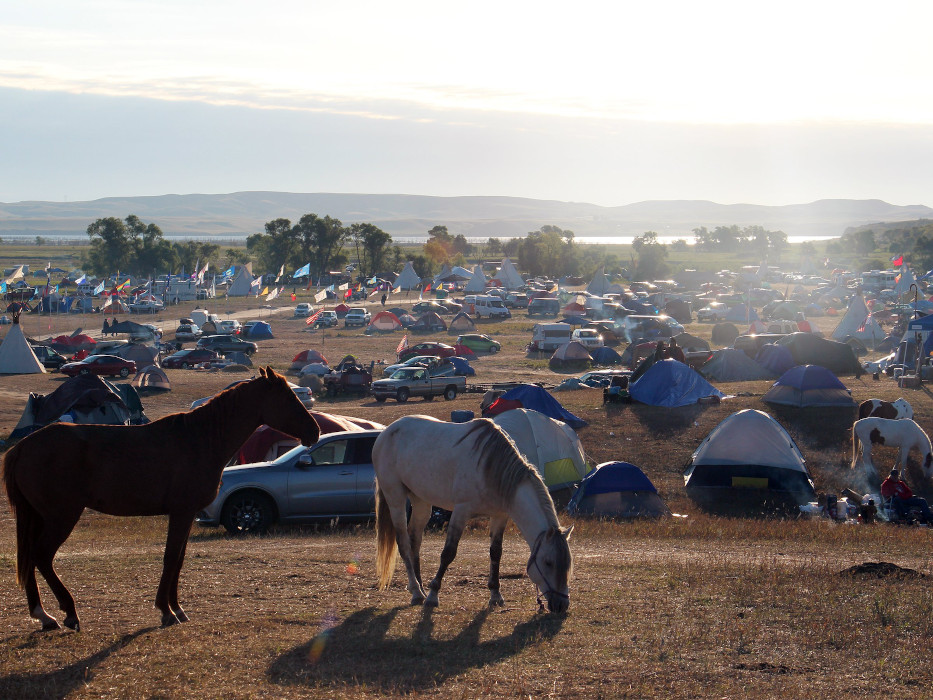 Horses graze early on the morning of Sept. 14, 2016, at the Oceti Sakowin camp near the Standing Rock Reservation in North Dakota, where thousands of people are camped in solidarity with the Standing Rock Sioux Tribe in opposition to the Dakota Access pipeline project. It's reportedly the largest gathering of Native Americans in more than a century. (AP/RNS/Emily McFarlan Miller)

The U.S. District Court for the District of Columbia has temporarily shut down the Dakota Access pipeline for the latest twist in what activists and religious leaders have called a " spiritual battle."

Oil must stop flowing through the Dakota Access pipeline by Aug. 5, according to a decision July 6 by Judge James E. Boasberg, who in March ordered a new environmental review for the pipeline.

His decision followed a series of briefings on whether to shut down the pipeline pending the review. In it, Boasberg pointed to the "seriousness" of the Army Corps of Engineers' violation of the National Environmental Policy Act by not previously conducting a thorough environmental impact study and the "potential harm each day the pipeline operates."

"This pipeline should have never been built here. We told them that from the beginning."

The Dakota Access pipeline runs from North Dakota to Illinois.

That path takes it beneath Lake Oahe near the Standing Rock Sioux Reservation in North Dakota, where, from 2016 to 2017, thousands of people gathered in prayer camps to stop the pipeline's construction.

"Fearing severe environmental consequences, American Indian Tribes on nearby reservations have sought for several years to invalidate federal permits allowing the Dakota Access Pipeline to carry oil under the lake," Boasberg wrote in the July 6 decision.

"Today they finally achieve that goal — at least for the time being."

The Standing Rock Sioux Tribe and other Native American nations in the area have not just objected to the Dakota Access pipeline for environmental reasons, but also for religious reasons. They've pointed to beliefs that the Creator has instructed them to care for the land and that water is sacred.

They fought construction of the pipeline not just in court, but also spiritually.

Along the way, they have gotten support from several Protestant Christian denominations, including the  United Methodist Church,  United Church of Christ, the Episcopal Church,  Presbyterian Church (U.S.A.)  and  Evangelical Lutheran Church in America.

Oil has been flowing through the Dakota Access pipeline since 2017.

After President Donald Trump signed a memorandum expediting approval of the pipeline, the Army Corps of Engineers concluded an environmental impact statement wasn't necessary to grant an easement for the Missouri River crossing at Lake Oahe.

In March, Boasberg ruled that had violated the National Environmental Policy Act. He ordered the Corps to complete the full environmental impact statement.

The judge also asked for briefings on "whether the easement should be vacated and the pipeline emptied" in the meantime.

On July 6, he wrote, "Although mindful of the disruption such a shutdown will cause, the Court now concludes that the answer is yes."

The Corps has estimated it will take 13 months to complete the environmental impact statement, according to the decision. However, a written statement from Earthjustice, which represents the Standing Rock Sioux in court, said a full environmental review "normally takes several years."