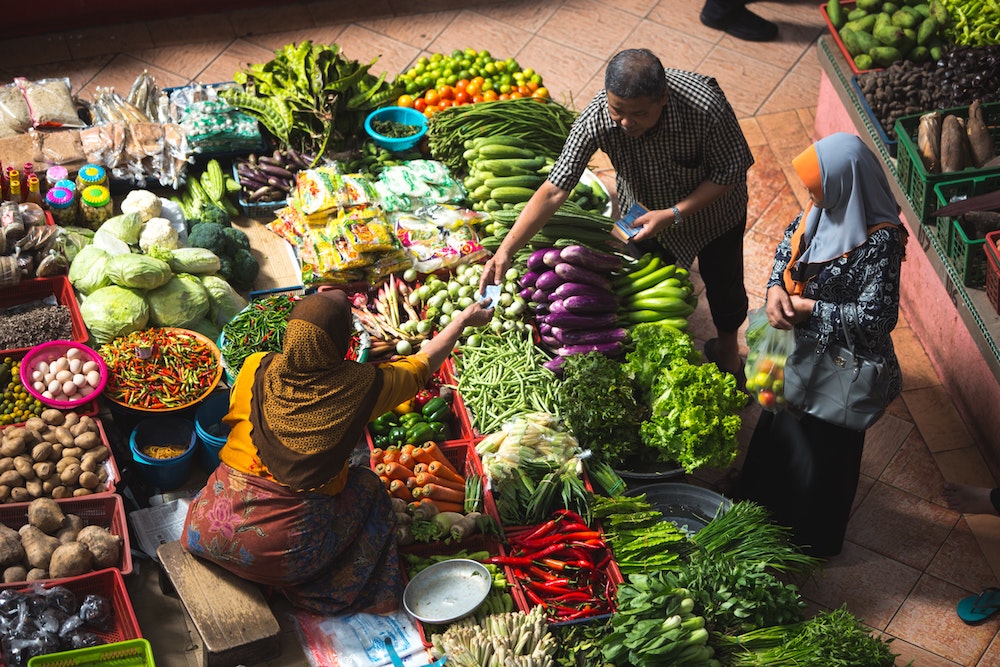 Knowing where our food comes from can help us feel more grateful for those who grow it and for the earth that sustains us, Catholic farmers say. (Alex Hudson/Unsplash)

"So what can ordinary Catholics do about climate change?"

That's a question that pops into the EarthBeat inbox from time to time. Environmental issues, especially climate change, often appear so overwhelming that our own actions seem insignificant.

But they're not. In his 2015 encyclical "Laudato Si', on Care for Our Common Home," Pope Francis made it clear that slowing global warming requires systemic change, but it will also take the efforts of all of us to care for our common home.

When I asked recently what issues our readers would like to see more of on EarthBeat, several of you asked for more coverage of actions that individuals, families, parishes and other faith groups can take.

That's the topic of today's story about three Catholic-run farms that are teaching and inspiring even non-farmers (and non-Catholics) to connect to the earth and make more deliberate choices. Everyday decisions — about the food we eat, the way we travel, how we use water and energy, and many other things — eventually add up.

The Catholic Climate Covenant, which organized the webinar at which people involved in those projects described their work, calls them "sustainability champions." But while that makes it sound as though they have some sort of special powers, in fact they are ordinary Catholics living as faithfully as they can the principles of Laudato Si'.

One thing they have in common is that they're not doing it alone. All of the farms are also faith communities — a reminder of how important it is to have companions on this journey.

The speakers had a couple of specific suggestions. Lorrie Heber, director of the White Violet Center for Eco-Justice, a project of the Sisters of Providence of Saint Mary-of-the-Woods in Indiana, recommended the practical tips outlined in David Gershon's book Low Carbon Diet: A 30 Day Program to Lose 5000 Pounds, which the sisters have used as a guide for shrinking their carbon footprint.

And Molly Sutter, a caretaker at Bethlehem Farm in southeastern West Virginia, reminded viewers that the recommendations to "reduce, reuse and recycle" are meant to be followed in that order. The best thing is to consume less. Second is to find new uses for things that would otherwise be discarded. Recycling should be a last resort, because many things that bear that triangular symbol actually can't be recycled and end up in the landfill anyway.

As for other individual efforts, reader Ann Cole wrote to thank us for Claire Schaeffer-Duffy's profile of Sharon Lavigne of Louisiana, who won the Goldman Environmental Prize for North America, and my account of the work of Liz Chicaje Churay, who won the award for Central and South America. She hoped we'd say more about the other winners, as well. So here are some brief descriptions; you can read more on the Goldman Prize website.

In Malawi, Gloria Majiga-Kamoto helped launch a grassroots movement that led the national government to ban a type of single-use plastic known as thin plastic. She stood firm despite efforts by the plastics industry to frame the issue as a choice between jobs and the environment, and a court upheld the ban.

Thai Van Nguyen of Vietnam founded an organization that rescued more than 1,500 endangered pangolins from wildlife traffickers between 2014 and 2020. Although the pangolin trade is illegal worldwide, the slow-moving mammals are among the most trafficked because of the high demand for their meat and their supposed medicinal powers. Nguyen also launched his country's first anti-poaching unit to combat the illegal wildlife trade.

In Japan, when the country turned to coal for energy in the wake of the 2011 Fukushima nuclear disaster, Kimiko Hirata spurred a grassroots campaign that led the government to scrap plans for 13 coal-fired power plants. That's the equivalent of "taking 7.5 million passenger cars off the road every year for 40 years," according to the Goldman Prize organizers.

And in Bosnia and Herzegovina, novice environmental activist Maida Bilal organized neighbors in her village to stop plans to dam the Kruščica River, her region's main water source. About 300 people blocked a small bridge around the clock for 503 days to keep construction equipment from reaching the site, withstanding bitter cold and police violence, until the project was canceled in December 2018.

So the answer to the question, "What can I do?" ranges from apparently small things, like eating less red meat, to participating in — or organizing — community action on local environmental issues. What are you, your neighbors or your faith community doing? Tell us in 150 words or less in a Small Earth Story. Help us spread the word.

When I watched the webinar about "sustainability champions," I asked myself, "Who are the champions I know?" I was a little surprised at how many came to mind. They include a class of 10-year-olds who created a nature trail at their local park, families who are trying to get their plastic waste down to zero (I'm working on that too — it hasn't been easy) and friends who are traveling by bike.

Who are your champions? If you know — or know of — someone whose story might inspire others who are striving faithfully to live out Laudato Si', drop us a line at earthbeat@ncronline.org and tell us about them.