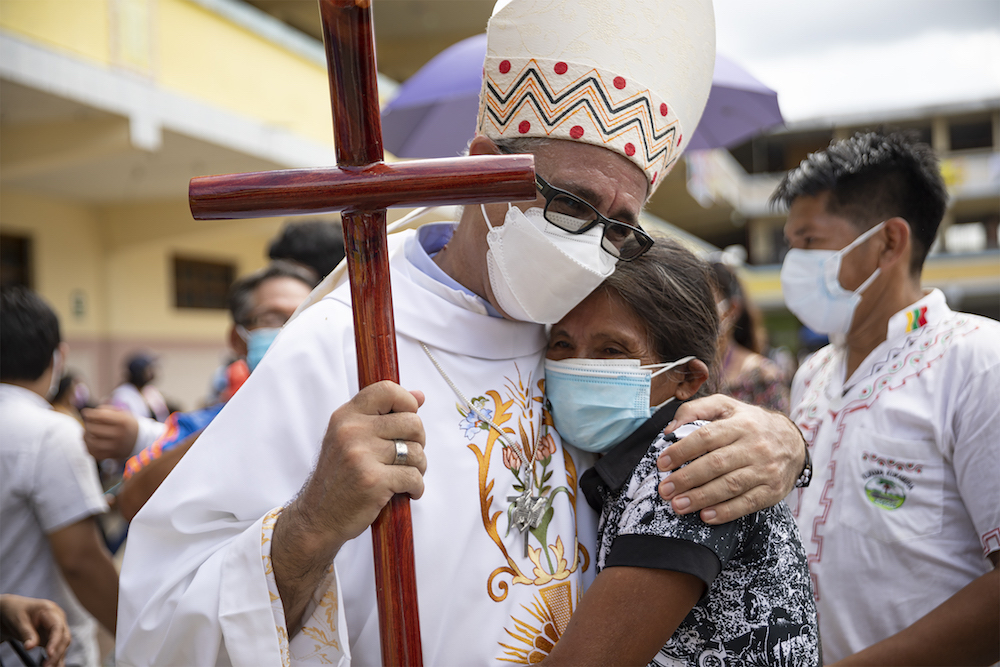 I started this week in Iquitos, a city of half a million people and the largest urban area in Amazonian Peru, where I attended the ordination of Bishop Miguel Angel Cadenas, the new head of the Apostolic Vicariate of Iquitos. It was the first time a bishop had been ordained in the city and the first time the prelate had been chosen from among priests already working there. Though born in Spain, Cadenas has spent nearly half his life as a pastor in the Amazon.

More than 1,000 people — double-masked and seated on carefully spaced chairs, because of a recent spike in COVID-19 cases — attended the outdoor ceremony. There were prayers and songs in Spanish and Indigenous languages. Children danced. There was a moment of silence for the thousands of people who have died during the pandemic.

The offertory gifts included a traditional bag and a hammock, both woven of palm fiber, and local produce. Representatives of various parishes carried placards expressing their dreams for the vicariate — one hoped for a church that was "more welcoming and less clerical."

I was particularly struck by the penitential prayers:

"Forgive us for not caring for your creation, for not learning to respect the beauty of the forests, and for exterminating vast areas of trees. ... Forgive us for staining the rivers with our selfishness and greed, for wanting to gain wealth without consideration for the suffering of our brothers and sisters. ... Forgive us because we have turned our common home into a house of death and desolation. Forgive us, Lord, forgive us." 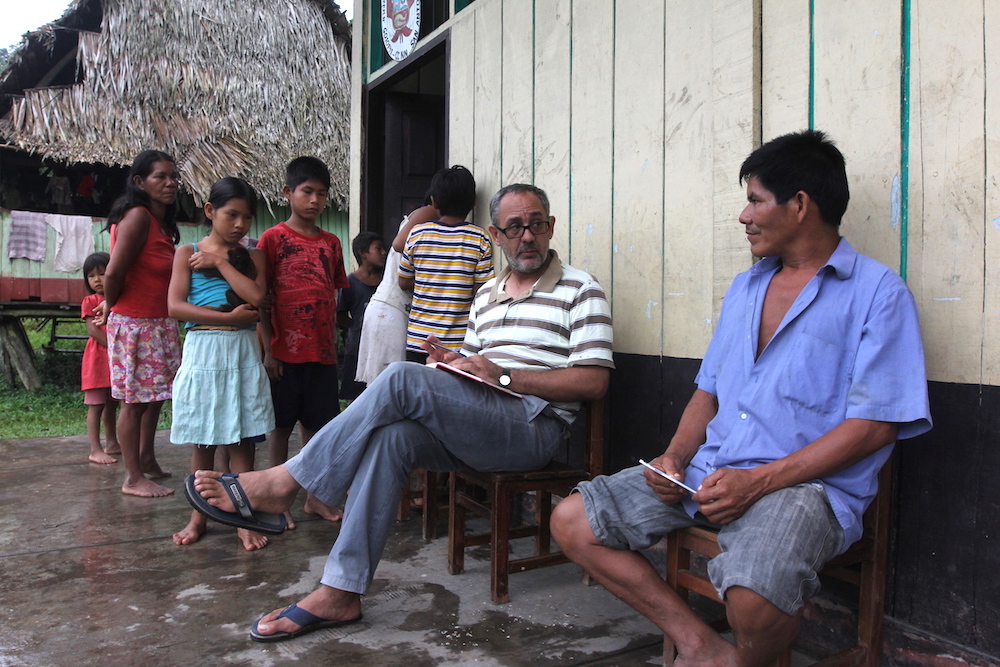 Then-Fr. Miguel Angel Cadenas talks with a community member in the village of San Antonio de Bancal, on the remote Urituyacu River in Amazonian Peru, during an annual visit in 2014. (Barbara Fraser)

I first met Cadenas and his fellow Augustinian, Fr. Manolo Berjón, when I was reporting in 2014 on pollution from oil operations affecting Indigenous territories along the Marañón River. They generously shared their knowledge of the region and its people, and through them I met the lay coordinators of Catholic communities in some of the villages belonging to their very rural Santa Rita Parish.

I spent long hours talking with the priests about toxic metals and health problems along the river, and when they moved from the river to an urban parish in Iquitos, they took me to meet families living in a neighborhood that periodically flooded with waste from city sewers, a slaughterhouse and a hospital.

In encouraging people to demand their right to a healthy environment, including through lawsuits supported by the vicariate, the priests faced criticism from oil company executives, government officials and sometimes even within the church.

But while others criticized their efforts, Pope Francis validated that struggle, first with his 2015 encyclical "Laudato Si', on Care for Our Common Home," and then with the 2019 Synod of Bishops for the Amazon and his corresponding papal exhortation "Querida Amazonia" (Beloved Amazonia).

Those documents draw a strong connection between environmental destruction and the dominant economic system, but globally, church leaders have not fully embraced them. Two cardinals raised that point in recent weeks.

In the U.S., a three-day virtual conference in mid-June drew more than 2,600 participants to explore ways for the U.S. Catholic Church to implement Laudato Si' and take stronger steps to address climate change, reports NCR environment correspondent Brian Roewe. Cardinal Blase Cupich, who gave the opening address, said this means both a spiritual and economic conversion. You can read the text of his speech here.

Meanwhile, Brazilian Cardinal Claudio Hummes said the church must act more quickly and decisively on the recommendations in Querida Amazonia, particularly the formation of ministers — not just priests and sisters, but also lay people — as Junno Arocho Esteves reported for Catholic News Service.

In many places, lay leaders weave the fabric of local Catholic communities together. At the end of the ordination ceremony, when the new bishop thanked some of the people who have helped shape his approach to pastoral ministry in the Amazon, many were animadores cristianos — lay coordinators of Catholic communities in villages.

When I asked Cadenas what he and Berjón had learned from them, he replied: "We learned patience. Normally they don't understand us, but they have patience; they give us time. We learned to love the church: It doesn't matter so much to them who the pastor is — they continue with their work. ... We learned to trust in God. ... We learned that their pain threshold is very high. We complain about everything. They have very hard lives, but lead them fairly cheerfully. .... We learned to love and to see the river with other eyes."

In those people, he said, "I see the Amazonian face of the church."

Last week's story about U.S. states permitting the composting of human remains, despite opposition from the Catholic Church, sparked a good bit of interest.

Readers Dave and Barb Corcoran wrote: "Motivation for doing this makes all the difference. Composting itself I think makes a lot of sense and it can be very reverent. We came from dust (earth) and we are returning to it. Composting a tree or garden in the backyard is a sacred place and closer to visit than a public or 'Catholic' cemetery. It can become a shrine or place of prayer. I think it is more sacred than cremation. What would Jesus do or St. Francis of Assisi? Anoint the body and let nature do the rest."

Catholic Climate Covenant will sponsor a virtual ecumenical dialogue on the "Ecumenical and Interreligious Guidebook: Care for Our Common Home" on July 29.

You can find more information about this and other coming events on the EarthBeat Events page. And if your organization is sponsoring an event, you can add it here.

Pope Francis has designated the fourth Sunday in July as World Day for Grandparents and the Elderly, and EarthBeat will be marking the day with an essay about lessons from the life of an elder of the S’Klallam and Suquamish tribes in Washington State.

Brian Roewe has also dug through EarthBeat's files to find other examples of intergenerational teaching and learning — watch your mailbox this weekend for a roundup of those stories.

Has an elder been influential in shaping the way you understand climate or environmental issues? We'd like to hear about them. You can submit it as a Small Earth Story or drop us a line at earthbeat@ncronline.org and tell us about that person.