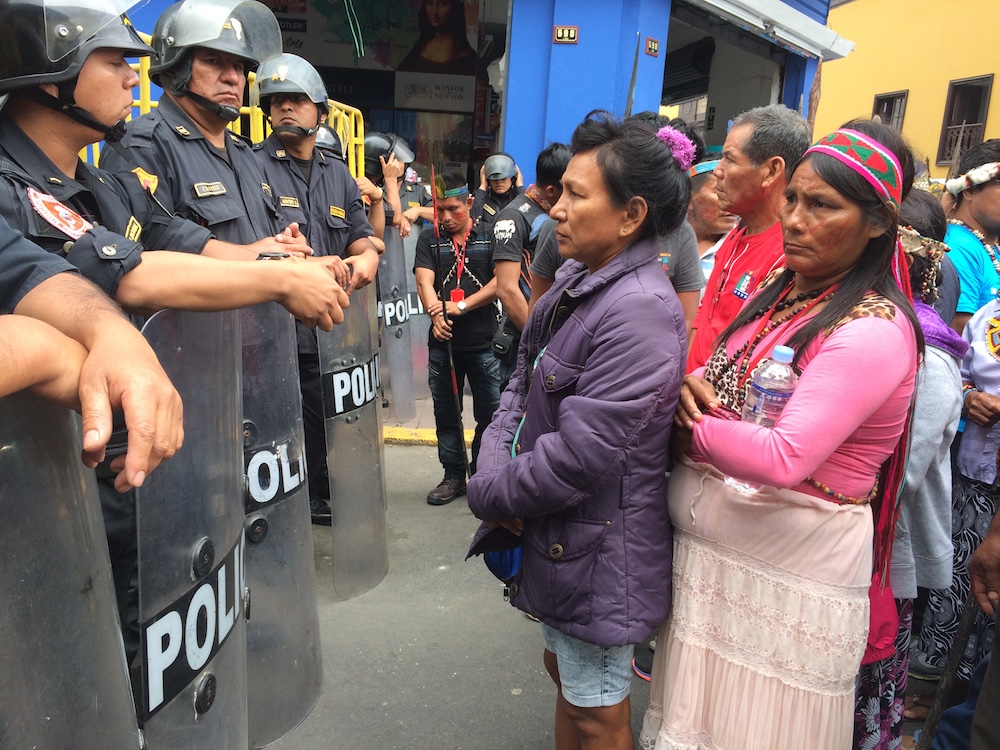 Indigenous women protesting oil pollution in the Peruvian Amazon face off with police outside the Congress building in Lima in 2016. (Barbara Fraser)

In the wake of the riot at the U.S. Capitol on Jan. 6, civil rights leaders, legislators and even President-elect Joe Biden commented that the Trump-supporting insurrectionists who stormed the building had been treated more leniently than Black Lives Matter protesters last year.

Although some experts say the case of the Capitol merits a more nuanced look and officials have pointed out that dozens of arrests were made, the images of the events in Washington contrast sharply with those from protests mainly led by people of color.

Human rights organizations worldwide have noted an increase in recent years in criminalization, or prosecution, of people involved in environmental protests.

In the past half-dozen years, more than 100 measures supporting the criminalization of protests have been introduced in state legislatures in the U.S., and 23 have become law in 15 states, as Naveena Sadasivam reported for Grist in June. The measures impose penalties for activities ranging from disturbing meetings of government officials to blocking highways or interfering with oil and gas facilities.

Several of the laws have been related to protests over oil pipelines, like the one at the Standing Rock Sioux Reservation in North Dakota, in 2016, which was marked by brutal treatment of people detained for protesting the Dakota Access Pipeline. A subsequent investigation by Alleen Brown, Will Parrish and Alice Speri at The Intercept revealed coordinated surveillance of demonstrators by various law enforcement agencies.

The U.S. is not the only place where such measures threaten the lives of people who defend the environment and Indigenous people's territorial rights. Victoria Tauli-Corpuz, a member of the Indigenous Kankanaey Igorot people of the Philippines and former U.N. special rapporteur on the rights of Indigenous peoples, was labeled a terrorist by her country's government.

In 2019, the non-profit watchdog group Global Witness, which tracks murders of people who are defending their land and environment, included criminalization of protests in its annual report for the first time.

"Evidence from across continents shows that governments and companies are using countries' courts and legal systems as instruments of oppression against those who threaten their power and interests," the group reported. "This includes the misuse of existing laws designed to stop terrorists or protect national security, and the creation of new rules to outlaw protest or muzzle freedom of speech. This makes attacks on defenders seem legitimate, increasing their likelihood."

The Indigenous people and church workers who participated in the 2019 Synod for the Amazon at the Vatican made clear that threats to and criminalization of people who are defending their land, rivers and forests from destruction by those who seek economic gain is a right-to-life issue. In the final synod document, they wrote:

Attacks on nature have consequences for people's lives. The pre-synodal consultations depicted this single socio-environmental crisis in terms of the following threats to life: appropriation and privatization of natural goods, such as water itself; legal logging concessions and illegal logging; predatory hunting and fishing; unsustainable mega-projects (hydroelectric and forest concessions, massive logging, monocultivation, highways, waterways, railways, and mining and oil projects); pollution caused by extractive industries and city garbage dumps; and, above all, climate change. These are real threats with serious social consequences: pollution-related diseases, drug trafficking, illegal armed groups, alcoholism, violence against women, sexual exploitation, human trafficking and smuggling, organ traffic, sex tourism, the loss of original culture and identity (language, customs and spiritual practices), criminalization and assassination of leaders and defenders of the territory. Behind all this are dominant economic and political interests, with the complicity of some government officials and some indigenous authorities. The victims are the most vulnerable: children, youth, women and our sister mother earth.

The incoming Biden administration has pledged to make environmental justice a hallmark of its policies. The new Democratic majority in the U.S. Senate makes it more likely that Biden's choice for interior secretary, New Mexico Rep. Deb Haaland, will be confirmed. Having a Native American at the helm of the department that oversees both public lands and the government's relationship with Native American peoples would send a strong message and be a first step toward righting wrongs that have marked generations.

"Communities at Work: Ways and practices to put creation care into action in our communities," the third of four webinars in the "Greening the Parish" series sponsored by the Greek Orthodox Archdiocese of America, will be held from 6 to 7 p.m. Eastern Time on Jan. 14. You can find more information about this and other events on the EarthBeat Events page.

I'd never heard of "Veganuary" until this year, but Damian Carrington at The Guardian reports that a record half-million people have pledged to eat only plant-based foods this month, and even some supermarket chains are supporting the effort. Studies show that meat and dairy production contribute considerably to greenhouse gas emissions and have a large water footprint.

I've cut meat out of my diet, but have a hard time eliminating all dairy products. Have you switched to a vegan diet? Why and how did you do it? Tell us about it in 150 words or less in a Small Earth Story or write us at earthbeat@ncronline.org.