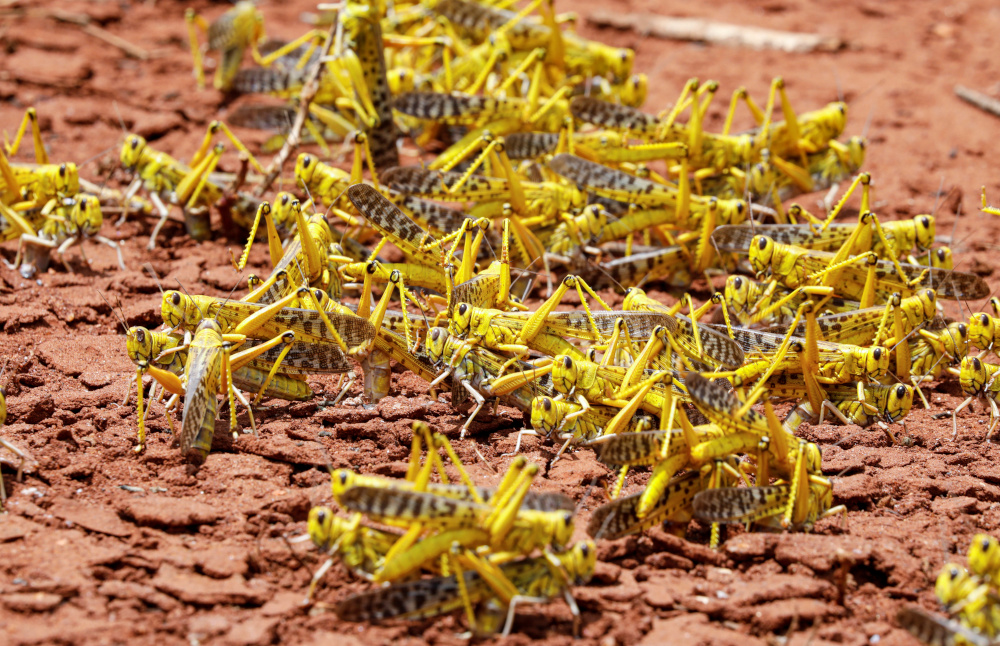 Desert locusts are seen on a farm in Kyuso, Kenya, Feb. 18, 2020. Local Catholic priests and villagers say the hatching insects mean new and locally bred swarms, something that must be avoided. (CNS/Reuters/Baz Ratner)

In this remote village about 200 miles east of Nairobi, residents – some Catholics – were fearing a new wave of desert locusts, as millions of eggs the insects laid earlier began to hatch.

Under the bushes and crops, the newly hatched hoppers can be seen attempting to fly. Within weeks, they will turn into adults when each locust consumes its own weight – roughly two grams – every day.

The village is one of the many in Kenya struck by the deadly locust plague. In mid-February, the second wave of the invasion started sweeping across the country. The first was recorded in December, when the swarms landed in the northeastern county of Wajir. Since then, they have spread to 18 other counties.

The Associated Press reported last month that the infestation of locusts in Africa is linked to climate change, noting that the heavy rainfall and warmer temperatures that the continent has been experiencing as a result of global warming are favorable conditions for locust breeding.

Local Catholic priests and villagers say the hatching insects mean new and locally bred swarms, something that must be avoided.

"The hatching eggs are the greatest concern at the moment. It means if they are not destroyed, the problem will continue for generations. At the same time, I think soon there are many people who will need food aid due to the destruction on the farms," said Fr. Patrick Musili of Kimangau parish in Kitui Diocese.

The locusts first landed in Maseki in early February, and by the time government planes came to spray, most of the crops had been destroyed.

"My crops – green grams, millet, sorghum and cow peas – were all gone in a few days. The animal pasture was also gone," Priscila Syombua, 25, told Catholic News Service. "We had never seen anything like this before. There were too many of them. Millions, perhaps billions."

Perpetua Kavinya, 25, a Catholic mother of two, told a similar story, recalling how one afternoon the insects blocked the sky as they made landfall.

"We thought they were flying past, but for one week, the insects were our unwanted guests. They moved from one farm to another, eating all the green foliage," said Kavinya. "Now, we have to wait for another rain season."

Kavinya said the rains should arrive in the next few weeks, but she was not sure whether to plant.

"We do not have seeds and, even if we had, the hatching insects would eat the germinating seedlings. We need to get the right information," she said.

Musili said the locusts also brought a rare unity among the people, with groups working together to chase away them away.

"When the insects struck, the local community came together to scare away the locusts using traditional means. The villagers moved in groups from one farm to another, pushing away the insects. When they moved to the next village, the action was repeated there," said Musili. "As their leader, I was pleased with that unity. No one could manage to tackle them alone."

The locusts landed in south central Somalia in December from Yemen, before moving into Kenya and Ethiopia. By Feb. 20, the insects had spread in seven East African countries, including Tanzania, Uganda, Ethiopia and South Sudan. This is the worst locust invasion in 70 years for the region. 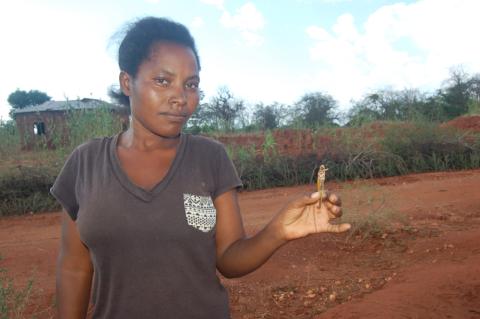 Priscila Syombua displays a dead desert locust on her farm in Maseki, Kenya, Feb.20, 2020. She said the locusts ate all her crops within a few days. (CNS/Fredrick Nzwili)

"South Sudan is now experiencing the invasion ... especially in southeastern parts around Kidepo Valley in the Didinga, Buya and Taposa ethnic territories. With insecurity and ambushes by armed tribesmen, emergency process is not moving," said James Oyet Latansio, the South Sudan Council of Churches general secretary.

The U.N. Food and Agriculture Organization said the locust swarms are increasing in Somalia, Kenya and Ethiopia and continue to move southward and westward toward Uganda and South Sudan. It has warned that the fast-breeding locusts could multiply 500 times more in March, when the rains bring more vegetation.

"We have seen one swarm here. We were shocked, since we never thought they would reach our farms from northern Kenya," said Benson Ngwili, a farmer in Kyanzavi, an area near Nairobi.

Some Catholic agencies have moved to intervene in the locust disaster. Malteser International, the worldwide relief agency of the Order of Malta, is working in Kenya's Marsabit area through the Pastoralist Community Initiative and Development Assistance and, in Ethiopia, through the Catholic Church's social and development coordinating office in Omorate.

Countries are responding by spraying the insects, but some areas that are inaccessible for control activities are turning out into breeding grounds for the locusts, Owino said.

At the same time, communities also fear the negative impact of pesticides on livestock, other insects like bees and sources of drinking water.

These fears are not unfounded.

"After the government sprayed my area, the following day, bees left two of my hives. I don't know where they went," said Kavinya.

The insects are called desert locusts, but thrive during heavy rainfall in deserts and arid areas, according to scientists. For months, East Africa has experienced extraordinarily heavy rainfall linked to an Indian Ocean surface warming, a condition called Indian Ocean Dipole.