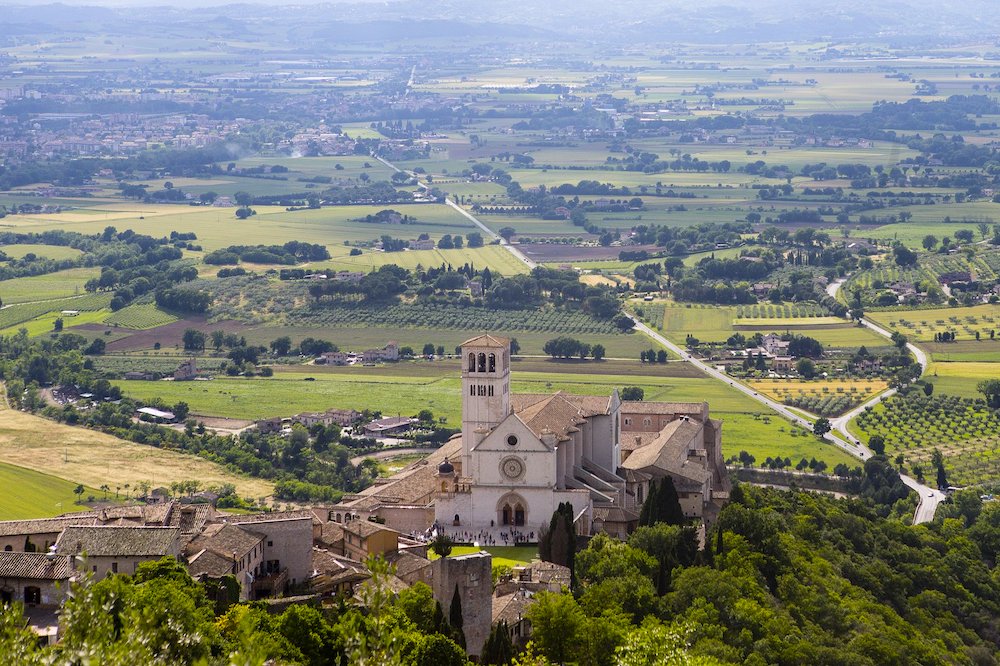 The Basilica of St. Francis of Assisi is seen from the Rocca Maggiore, a fortress on top of the hill above the town of Assisi, Italy, in May 28, 2013. (CNS/Octavio Duran)

What would a global economy that puts people and the planet first look like?

That's a central question more than 2,000 young economists and entrepreneurs from 120 countries are exploring this week at the Economy of Francesco, a three-day virtual conference centered in Assisi, Italy, and hosted by the Vatican at the invitation of Pope Francis.

The conference, which began Thursday, aims to formulate a new economic vision, one that deemphasizes growth and profit and prioritizes justice, equity and caring for the poor and the common planetary home.

The conference is being live streamed, after the coronavirus pandemic made it impossible to hold a large in-person gathering in Assisi, as originally planned. On the first day, a small group of young people led the online proceedings from inside the Basilica of St. Francis of Assisi.

"We have accepted the shared commitment to reanimate the economy," said Catalina Hinojosa of Ecuador.

In his introductory remarks, Cardinal Peter Turkson, prefect of the Dicastery for the Promotion of Integral Human Development, thanked the participants for "bringing light into our dark world," and for pledging to work toward a post-pandemic global economy "that is inclusive and sustainable, one that can help us to behave as brothers and sisters living in a common home."

Turkson referred to St. Francis as an example of the universal love for humanity and for all of creation that is needed to overcome divisions in the world and a consumerist and throwaway culture. Healing the world, he said, requires the creation of good companies, good jobs and good wealth — all of which begin with an economy that serves the people, rather than the other way around.

"We also need to produce 'good goods,' meaning goods that truly serve people and respect the environment. It is this whole process that can generate 'good wealth,' one that goes beyond mere material profit, one that promotes integral human development while caring for our common home," Turkson said. 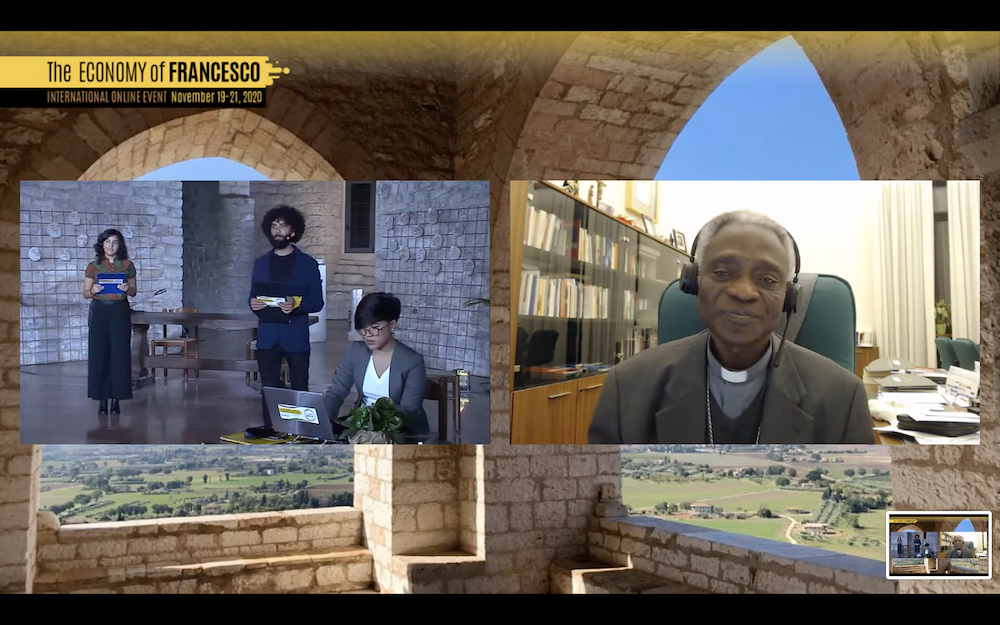 Cardinal Peter Turkson, prefect of the Dicastery for the Promotion of Integral Human Development, right, addresses participants of the Economy of Francesco conference, on its first day, Nov. 19, while a small group of young people, left, led the online proceedings from inside the Basilica of St. Francis of Assisi. (NCR screenshot)

Bishop Domenico Sorrentino of Assisi said the story of St. Francis giving up his possessions and inheritance reflects his understanding of money as not an idol, but as a tool "to build a beautiful economy, rich in meaning and gift, which cannot exclude anyone and which, on the contrary, must aim for the good of everybody, and especially of the poor."

"He was a genuine change maker, an 'economist,' without knowing it," Sorrentino said.

Francesca Di Maolo, president of the Assisi-based Seraphic Institute, which works with children in with severe disabilities, said the pandemic has exacerbated inequalities present in the current economic system that harm the most fragile the most. She encouraged participants to "dream of a better world" and develop an economy of inclusion rather than exclusion.

"There will be no development or progress without caring of the most fragile members of society. You can change the current economic system," Di Maolo said.

Francis — who throughout his papacy has critiqued economic systems that further inequality, writing in Evangelii Gaudium "such an economy kills" — is scheduled to address the participants in a video message on Saturday. Before the opening session, he tweeted, "The earth and its poor urgently demand a sound economy and a sustainable development."

In May 2019, on the feast of St. Joseph the worker, Francis invited young people to Assisi to enter a "covenant" of global change to "reanimate" a new economy "attentive to the person and to the environment," recalling the concept of integral ecology outlined in his 2015 encyclical "Laudato Si', on Care for Our Common Home."

"We need to correct models of growth incapable of guaranteeing respect for the environment, openness to life, concern for the family, social equality, the dignity of workers and the rights of future generations," the pope said at the time.

When the conference was first planned, organizers anticipated upwards of 2,000 young participants gathering in Assisi for reflection, relationship building and collaboration. But the coronavirus pandemic upended those plans and pushed the conference from March to November. Organizers hope to bring people to the historic Italian town in autumn 2021 for a follow-up event.

Even with most participants not physically present, the conference still found ways to transport them to the birthplace of St. Francis. Videos between conference sessions took attendees on virtual pilgrimages into the streets and sites of Assisi, including the Sanctuary of the Spoliation, where the saint was baptized, and the Rivotorto Sanctuary, where he embraced a leper. Over the next two days, the conference will also visit the Church of San Damiano, the Basilica of St. Clare and the Palazzo Monte Frumentario. 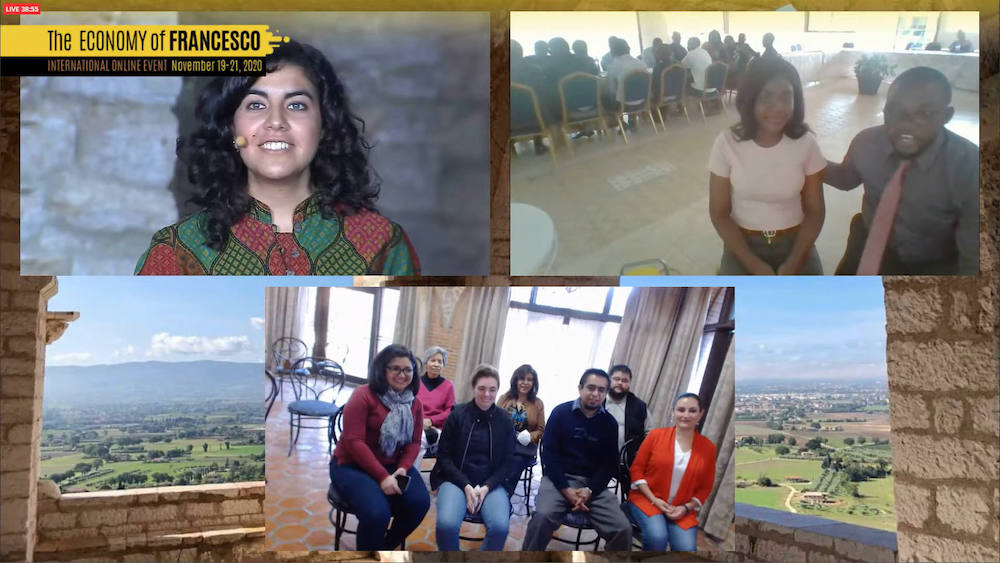 Sessions on the first day touched on topics such as food insecurity, ecological and social transition communities, and ways to reimagine development based more on fulfillment than on profit.

In each, young entrepreneurs, economist and students conversed and shared ideas with more seasoned experts who offered feedback.

In the session on human flourishing, young participants shared their ideas of ways to bring about that: a mapping tool that highlights what unites rather than divides; focusing development on smaller and mid-sized cities to provide greater opportunities and prevent overcrowding in large metropolises; and a Children's Flourishing Index as an alternative to typical market indices like gross domestic product.

Responding to the ideas, Sachs, who has worked on the Global Happiness Index, said it's critical to measure what's important to people and their security and welfare.

"If all we're doing is measuring what is happening in the marketplace right now, we're going to [not] see what's happening to human well-being, and to environmental well-being," he said, "which is why we have a crisis of our national income accounts and GDP, which have been used by politicians and governments as the reference point for what to do."

In the months before the conference, participants held nearly 30 preparatory conferences in what they dubbed 12 "thematic villages," each focusing on a specific aspect. Among them: work and care; finance and humanity; agriculture and justice; energy and poverty; policies and happiness; and women for economy.

Felipe Witchger, one of the co-conveners of the U.S. hub, told EarthBeat before the conference began that it represented the first time he had heard the church articulate how social and environmental crises are intertwined with economic issues.

The 34-year-old founder of the Community Purchasing Alliance in Durham, North Carolina, said that the dominant view in mainstream economics is neoclassical and "rooted in a very reductionist view of human potential," particularly in U.S. culture.

"It's that individual entrepreneur that makes it on Wall Street or in tech, and make success for themselves and family. And it lacks the kind of community, common good seeking the wholeness that I believe our Catholic tradition enriches us with," Witchger said.

On Friday, Nov. 20, Nobel winner Yunus will speak about finance as viewed through the lens of integral ecology. That same day will conclude with a 24-hour marathon on the Economy of Francesco's YouTube channel where participants in 20 countries will each share stories of local projects and experiences inspired by the conference.

Other sessions during the final two days will include a panel on socio-ecological responsibility featuring Boff, Shiva discussing bottom-up development, and a reading of Francis' latest encyclical, Fratelli Tutti, in light of women's role in the economy. 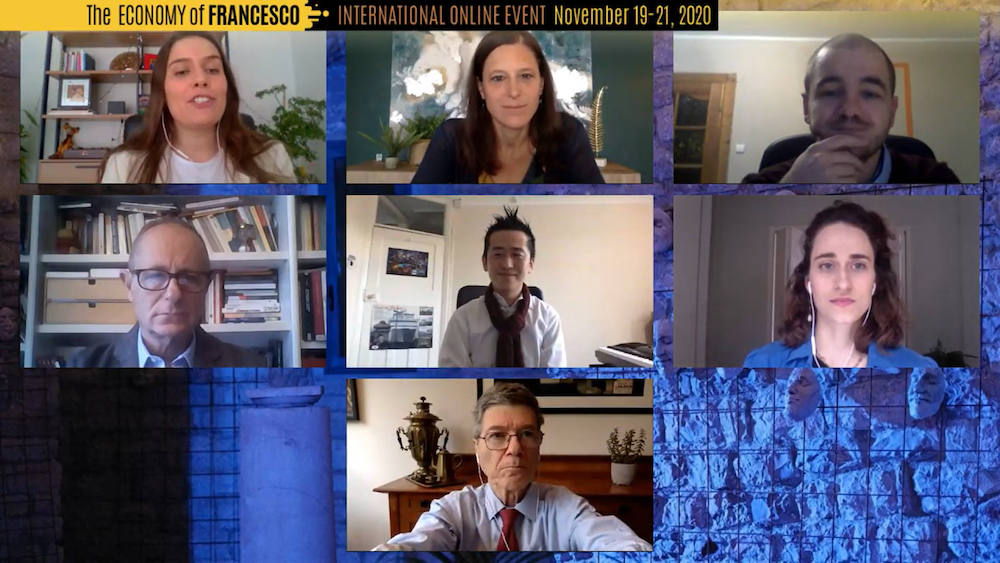 Panel discussion on Nov. 19, the first day of the Economy of Francesco conference (NCR screenshot)