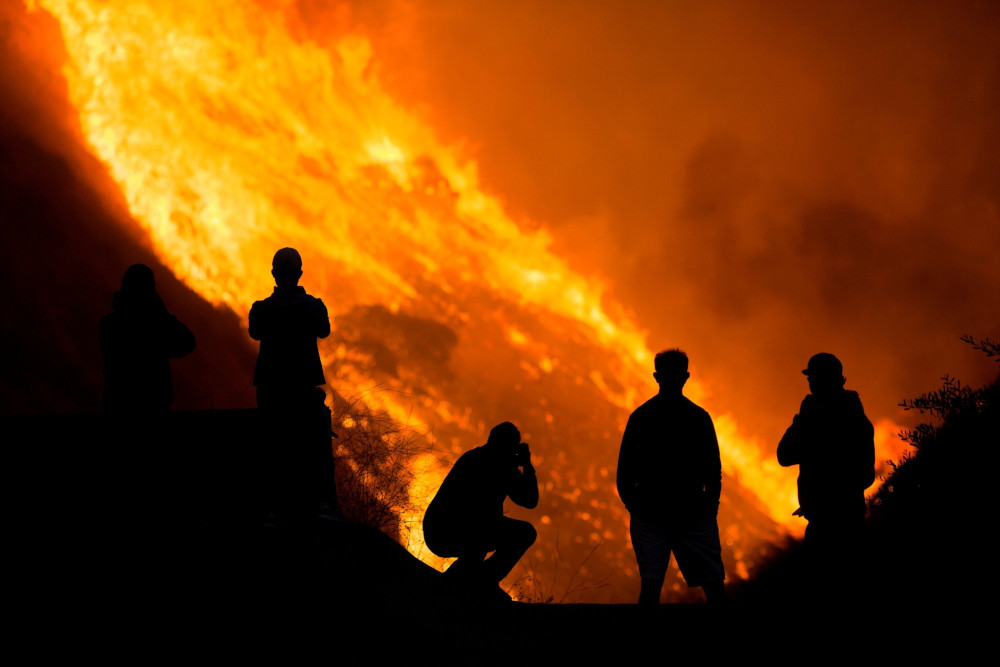 Extreme global temperatures, wildfires and hurricanes continued to plague the planet during 2020, prompting U.N. Secretary-General Antonio Guterres to appeal to the world to end its "war on nature."

In a speech at Columbia University Dec. 2, Guterres warned that continued growth in fossil fuel extraction and usage would feed a growing cycle of warming that will place all of humanity in danger.

"The state of the planet is broken. Humanity is waging war on nature. This is suicidal," he said.

Guterres' concern emerged as the World Meteorological Organization projected that 2020 would end about 1.2 degrees warmer than the last half of the 19th century when industrialization led to increased usage of oil, coal and natural gas. Climate scientists expect 2020 to be one of the three hottest years on record.

Ecologists also expressed concern that widespread deforestation is leading to diminished biodiversity and increasing the risk of disease pandemics such as COVID-19.

A study published in the Aug. 5 issue of the science journal Nature added to a growing body of evidence that connects trends in human development and biodiversity loss to disease outbreaks.

The COVID-19 pandemic swept around the world by March after first being reported in China in late 2019. Cases continued to spike in the U.S. as 2020 neared its end, claiming a disproportionately higher toll in low-income and minority communities, according to federal data and the Johns Hopkins Coronavirus Resource Center.

Meanwhile, nations continued to hold firm to their pledges to reduce greenhouse gas emissions under the 2015 Paris Agreement. The United States, however, formally left the accord Nov. 4, becoming the only country of the nearly 200 nations that signed it to abandon its promises to reduce emissions.

President-elect Joe Biden said Dec. 12 when he takes office the United States will rejoin the accord.

President Donald Trump announced in 2017 the U.S. would withdraw from it because he said it imposed an unfair economic burden on U.S. taxpayers.

Citing how climate change most negatively affects poor and marginalized communities, Pope Francis continued speaking of the importance of caring for creation while questioning the benefits of increased consumerism and the burning of fossil fuels. 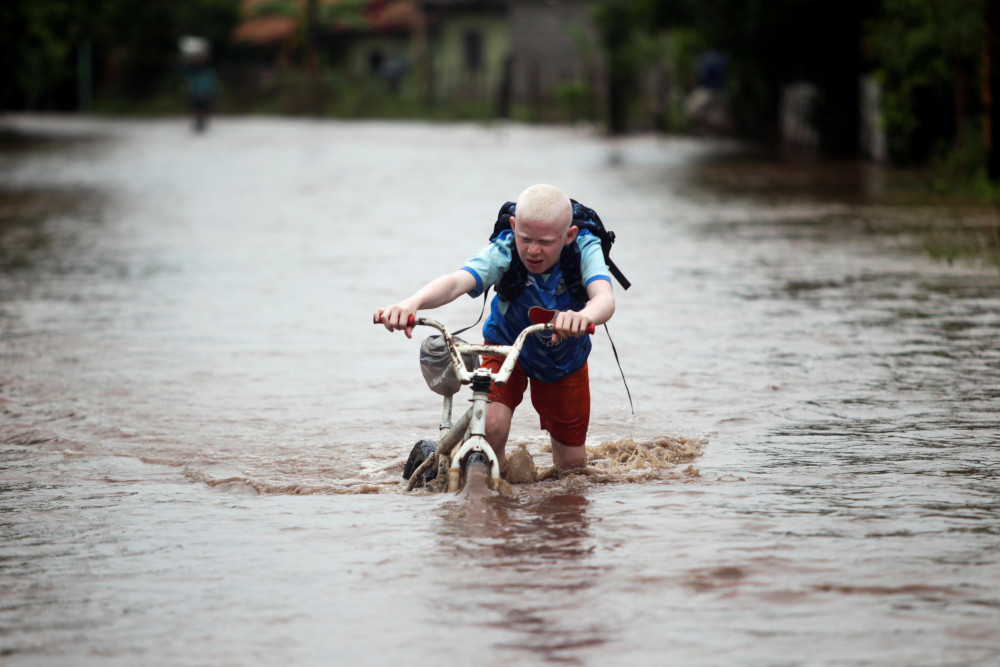 A child pushes a bicycle through a flooded road in Marcovia, Honduras, Nov. 18, 2020, after the passing of Huricane Iota. (CNS/Reuters/Jorge Cabrera)

"Now is the time to abandon our dependence on fossil fuels and move, quickly and decisively, toward forms of clean energy," Pope Francis said as he marked the World Day of Prayer for the Care of Creation Sept. 1.

“We have caused a climate emergency that gravely threatens nature and life itself, including our own,” the pope said.

Acknowledging the pope's longstanding concerns for the environment, global observances took place for the fifth anniversary of his encyclical, Laudato Si', on Care for Our Common Home.

A weeklong observance in May led by the Vatican Dicastery for Integral Human Development included online workshops that addressed ecological spirituality, sustainability and social justice advocacy and a rolling day of prayer.

As part of the observance, the dicastery announced a "Special Laudato Si' Anniversary Year" that began May 24.

Across the U.S., church-led conservation and sustainability efforts gained momentum. Environmental programs in the Indianapolis, Chicago and Atlanta archdioceses and the Stockton, California, and Joliet, Illinois, dioceses focused on alternative energy programs and advocacy to protect creation.

In a major effort, the Diocese of Richmond, Virginia, introduced a solar power program in collaboration with Catholic Energies, a program of the Catholic Climate Covenant.

The covenant also introduced the Catholic Climate Project, an intergenerational movement to respond through action and prayer to the challenges posed by climate change. The effort is set to build on what parishioners and organizations already are doing while inviting more people to deepen the Catholic commitment to protect creation.

2020 also marked the 50th anniversary of Earth Day April 22. In a statement on its website about the day, the California Catholic Conference noted that Earth Day awareness and activism have led to the Clean Air, Clear Water and Endangered Species acts.

"As Catholics, we are deeply committed to our environment and our home," said the conference, which is the public policy arm of the state's Catholic bishops.

In line with Francis' call for fossil fuel divestment, dozens of Catholic and faith-based entities announced plans to do so in two separate announcements during the year.

A tally by the Global Catholic Climate Movement-led campaign shows that since 2016 nearly 400 religious organizations worldwide have said they will divest.

High temperatures and long-term drought in parts of Australia, Siberia and the western U.S. and Canada fueled massive wildfires that claimed lives and destroyed entire communities. 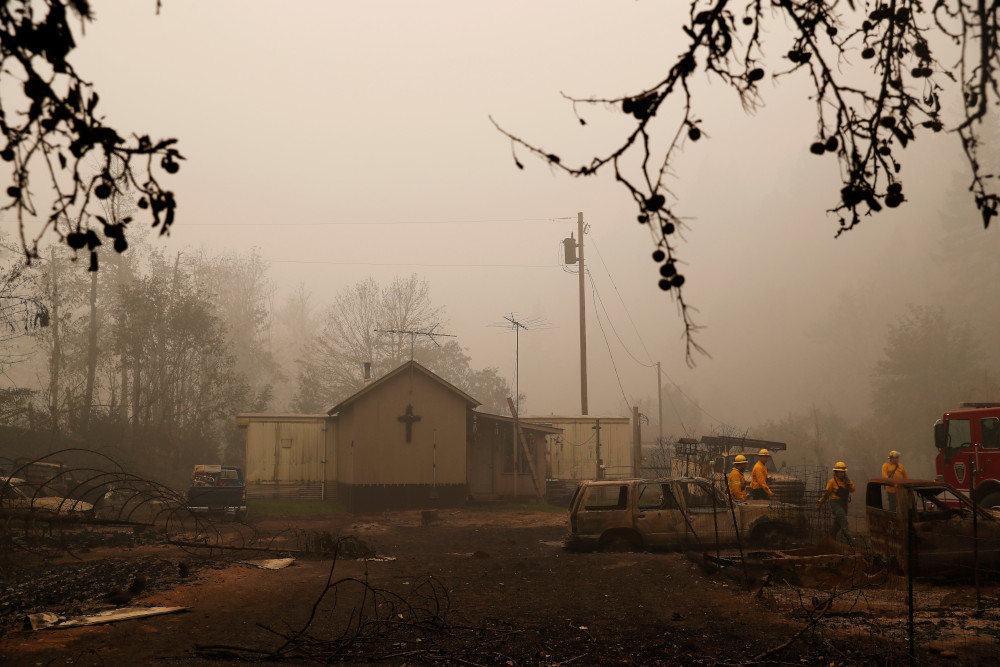 Firefighters in Detroit, Ore., assess damage to a church Sept. 14, 2020, in the aftermath of the Beachie Creek Fire. (CNS/Reuters/Shannon Stapleton)

Extreme temperatures in Australia saw fires that started in 2019 continue into early 2020 and then fire up again in November. Australian naturalists estimated that 1 billion animals lost their lives in the first round of fires.

Archbishop Alexander K. Sample of Portland visited Southern Oregon Sept. 19-20 to meet some of the hundreds of people who lost homes earlier in the month to powerful wind-driven fires. In Sacred Heart Parish in Medford alone, almost 150 families, many of whom are lower-income Latinos, lost their homes. Entire neighborhoods in Talent and Phoenix, Oregon, disappeared.

A fire also ravaged Mission San Gabriel Arcangel in California in the predawn hours of July 11, leaving gaping holes in the church's 230-year-old roof. The altar, along with the mission's bell tower and museum, were spared, but the thick adobe walls were blackened.

Beyond the fires, 2020 was record setting for hurricanes. The Atlantic basin saw its highest number of named storms with 30 including 13 hurricanes, six of which were classified as major. Hurricane Laura was the strongest to hit the U.S. coastline, raking Lake Charles, Louisiana, 50 miles inland, Aug. 27 with 135-mph winds and torrential rains that caused widespread flooding.

Much of the diocese's infrastructure sustained serious damage, as dozens of churches, several schools and chancery offices needed major repairs.

Prior to landfall in the U.S. Laura swept through several Caribbean islands including Hispaniola, where 35 people overall died in Haiti and the Dominican Republic.

Six weeks later on Oct. 9, the same area of Louisiana took a direct hit from Hurricane Delta. More than half of the Lake Charles Diocese's 39 churches had tarps on their roofs after Laura, and most of those tarps blew off during Delta, soaking them anew.

In Central America, powerful hurricanes Eta and Iota — two weeks apart in November — inundated Nicaragua, Honduras, El Salvador and Guatemala, forcing tens of thousands of people from their homes, which had filled with water and mud.

Honduran authorities reported at least 100 deaths and $10 billion in damage from the storms, the most devastating in 11 years. Officials said 1 million people lost their jobs or source of income.

And in the Philippines, Typhoon Goni, the strongest storm of the year on the planet, left 25 people dead and thousands of people displaced by flooding and wide-scale destruction of homes and farms. It was the second super typhoon of the season in the Pacific basin.