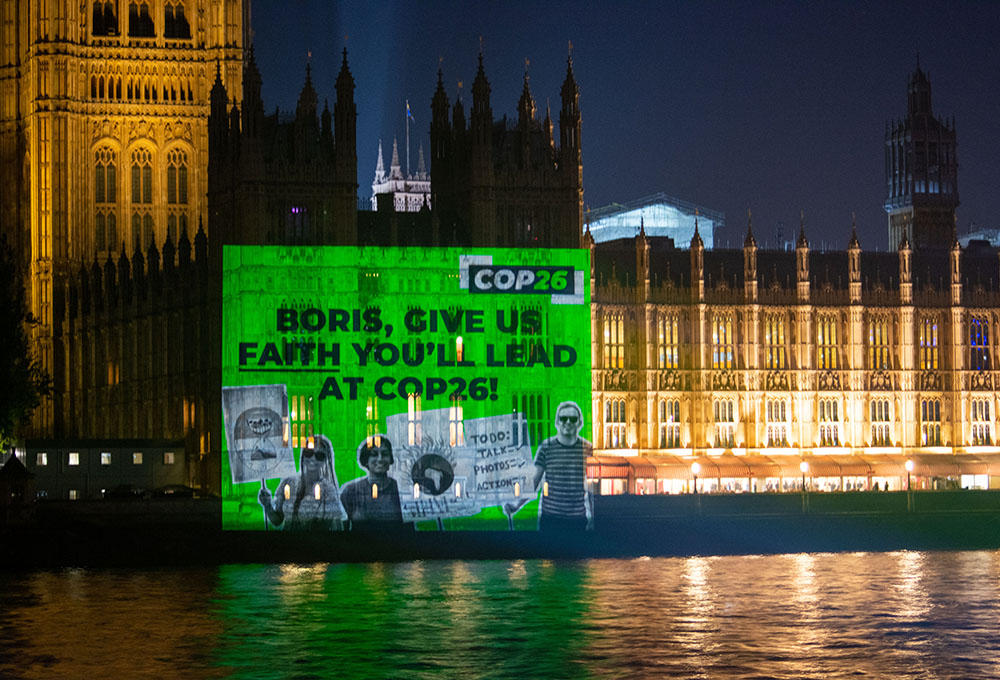 An image projected onto Parliament in London Oct. 25 urges British Prime Minister Boris Johnson to show leadership at the U.N. climate conference, COP26, which opens Oct. 31 in Glasgow, Scotland. The projection was organized by the Catholic Agency for Overseas Development, Christian Aid, World Vision, the Scottish Catholic International Aid Fund, Tearfund and the Faith for the Climate network. (Courtesy of Christian Aid)

"We need to ensure countries are making practical progress, and that those which caused the climate crisis are putting enough money on the table so others on the receiving end to adapt and mitigate the consequences," Neil Thorns, head of advocacy, communications and education with the London-based Catholic Agency for Overseas Development, or CAFOD, told EarthBeat.

"Though our own government has come up with ambitious targets, it hasn't put the necessary policies behind them. Britain's churches can offer support here through their international links, but also in recognition of their historic responsibilities — in the country which gave birth to the Industrial Revolution, whose impact is still being witnessed today," he said.

Up to 25,000 climate and human rights activists are expected to converge on Glasgow's Scottish Event Campus, along with business, charity and civil society representatives. The leaders' summit opening the conference on Nov. 1-2 will also be the largest gathering of world leaders ever held on British soil.

The event is shining a spotlight on Johnson's government.

"Although we must hope for practical progress, especially after two years of COVID, a great deal of diplomacy is needed before such a conference, and this hasn't happened," Alistair Dutton, chief executive of the Scottish Catholic International Aid Fund (SCIAF) and a Holy See delegation member, told EarthBeat. "But while governments can set the policy frame, there's a lot they don't control. Much of what's needed comes down to individuals, and this is where churches can help."

Appealing on its website for world leaders to "listen to the chorus that cries for the earth," SCIAF has paid for campaigners from Colombia, Malawi and other countries affected by climate change to attend COP26.

The church in England and Wales has circulated a prayer, asking God to instill in political leaders the "courage and gentleness to implement fairer solutions for the poorest and most vulnerable."

A "Guardians of Creation" project, launched jointly by CAFOD, the British Jesuits, Churchmarketplace, Inter-Diocesan Fuel Management and other organizations, is helping the U.K.'s Catholic community "work towards a carbon-neutral and more sustainable future," according to the Bishops' Conference of England and Wales. The project draws inspiration from the pope's 2015 encyclical, "Laudato Si', on Care for Our Common Home," which was widely acclaimed at the Paris climate conference, COP21, in 2015.

The Guardians of Creation project is co-sponsored by the Laudato Si' Research Institute, which has been promoting an "intellectual apostolate" in Oxford since 2019. 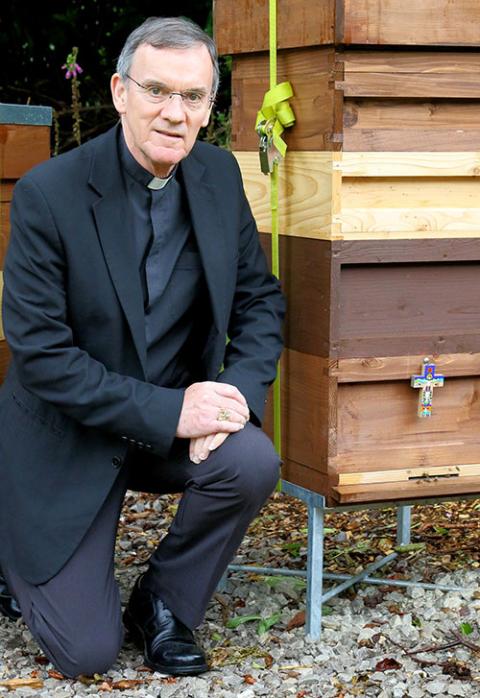 Bishop John Arnold of Salford, England, poses for a photo with beehives at the Laudato Si Centre in 2019. (CNS/Simon Caldwell)

Several projects launched as pilots in certain dioceses are expanding to the wider church. "Journey to 2030," set up by Bishop Richard Moth of Arundel and Brighton, England, has established a "parish engagement network" to ensure Catholics "play a key role in the fight to save the planet." And a "Livesimply Award," sponsored by Bishop Declan Lang of Clifton, England, recognizes Catholic organizations involved in environmental justice and sustainability.

A separate Laudato Si' Centre, run from Salford, England, by Bishop John Arnold, the church's lead prelate for the environment, is promoting ecological activities that "demonstrate the interconnectivity between humanity and nature."

On Oct. 11, Arnold joined Catholic leaders from the G20 countries in calling for fossil fuels to be consigned to history by stopping the development of coal, oil and gas, and scaling up investments in wind and solar power.

"The voices from the communities we work with are ringing out. ... We cannot and must not be quiet in the face of such suffering and injustice", the joint statement said. "Our moral duty is unquestionable. Advanced economies must act first to tackle climate change and act quickly to protect current and future generations and our common home."

And the Scottish bishops' conference and all of the country's dioceses and archdioceses were on the most recent list of faith groups divesting from fossil fuels, released Oct. 26.

Other churches and faith groups in the U.K. have also endorsed the climate campaign.

In a May resolution, the Protestant Church of Scotland set a goal of net-zero carbon emissions by 2030, while local churches are offering accommodation and opportunities for prayers and pilgrimages during COP26 in Glasgow, which will coincide with a Scottish Interfaith Week.

In England, members of the Christian Climate Action group glued themselves to the ground outside the Anglican archbishop of Canterbury's London residence in mid-October, demanding an end to his church's fossil fuel investments. And there are plans for church bells nationwide to ring out a "code-red warning to humanity" when COP26 gets underway. 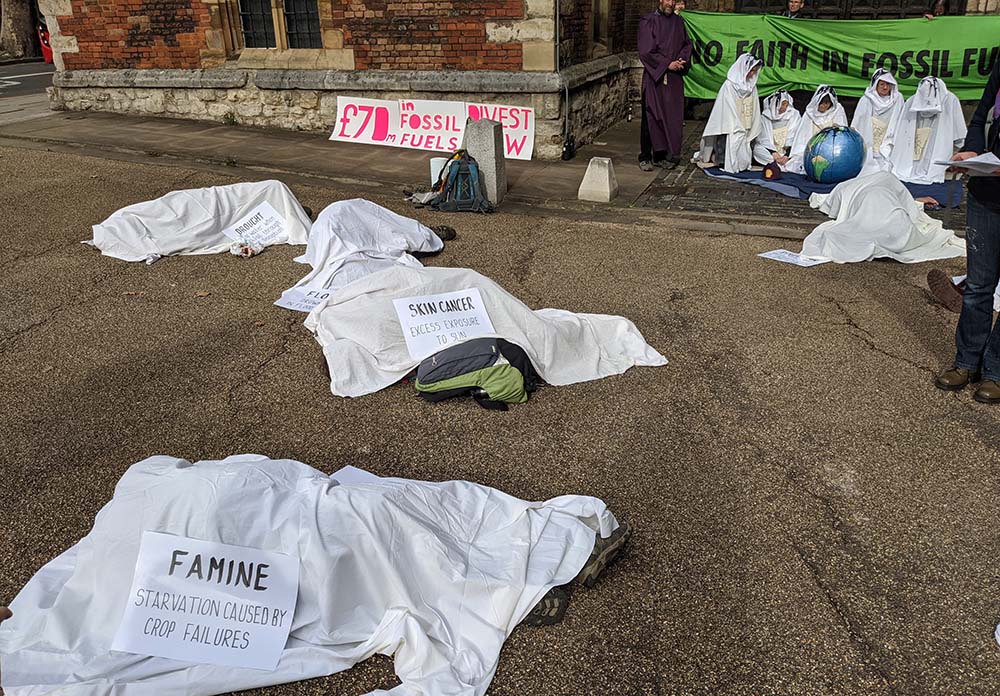 On Oct. 18, CAFOD, SCIAF, Tearfund and other Christian groups joined Muslim, Jewish, Buddhist and Hindu representatives in an interfaith message to premier Johnson's Downing Street office, reminding him of his "unique position to lead the world in tackling the climate crisis."

Although British society is largely secular, with organized worship at a low level, climate justice and environmental protection remain an area where religious voices are clear and audible.

Catholic communities are ready to respond, and their actions gain greater value in the public mind when undertaken with other faith groups, said CAFOD's Thorns.

SCIAF's Dutton agreed, adding that if views and perspectives can be brought together, and the lead shown by activists embraced by whole religious communities, this could have a major impact.

"The Catholic church itself is a reflection of society — it includes some of the most progressive and committed people, but also some of the most conservative and skeptical," Dutton told EarthBeat. "But if the whole church begins to see the climate crisis as the defining issue of our age, and if enough people across the Catholic spectrum understand what's at stake, this could move the dial quite dramatically."

Could this also push Johnson's government to go further?

With a commitment, announced in December 2020, to achieve net zero by 2050, the U.K. can claim to be at the leading edge of climate change pledges.

In June, the government hosted a G7 summit of the world's richest countries and confirmed plans, under its "nationally determined contribution," or NDC, to step up control of emissions from private homes, transport and agriculture.

Yet campaigners say even this falls short of the U.K.'s responsibility as one of the world's largest economies.

"The government has made legal commitments and put lots out here, and this is encouraging," Thorns told EarthBeat.

"But there's no point adopting these targets unless you back them up with substance. We must hope Johnson himself now takes an active role in encouraging other world leaders to make COP26 a success, and in stressing the positive benefits of clean air, better public transport and a green, sustainable future."

Catholic church leaders will participate in an interfaith vigil in central Glasgow as COP26 gets underway on Oct. 31, and join a Nov. 6 Day of Action in London — an event that drew half a million people during the last conference, in Madrid in 2019.

Besides seminars and exhibitions, an international Mass is also planned for Nov. 7 during a People's Summit for Climate Justice.

While stressing a multilateral approach, and seeking to work with governments, U.N. agencies and civil society groups, faith groups will also be highlighting the need for an effective follow-up to COP26.

"Catholic groups like ours can remind world leaders, often arguing over small things in their own COP bubbles, of the larger moral picture — that there's more at stake than words on a page," Thorns said. "The COP is just a moment in time, and it won't solve the world's problems. Once it's over, the church, with its worldwide capillary network, should call on governments to act and step in to support the most vulnerable."

"We shouldn't treat COP26 as the end in any shape or form — it's just the latest meeting bringing states together to spell out their contribution to controlling climate change," Dutton told EarthBeat.

"However much we manage to obtain agreement on, we need to move from talk to delivery. This is where the church, through its parishes and communities, can really make a difference, by pushing us to go further and showing what these commitments mean for each and every one of us."