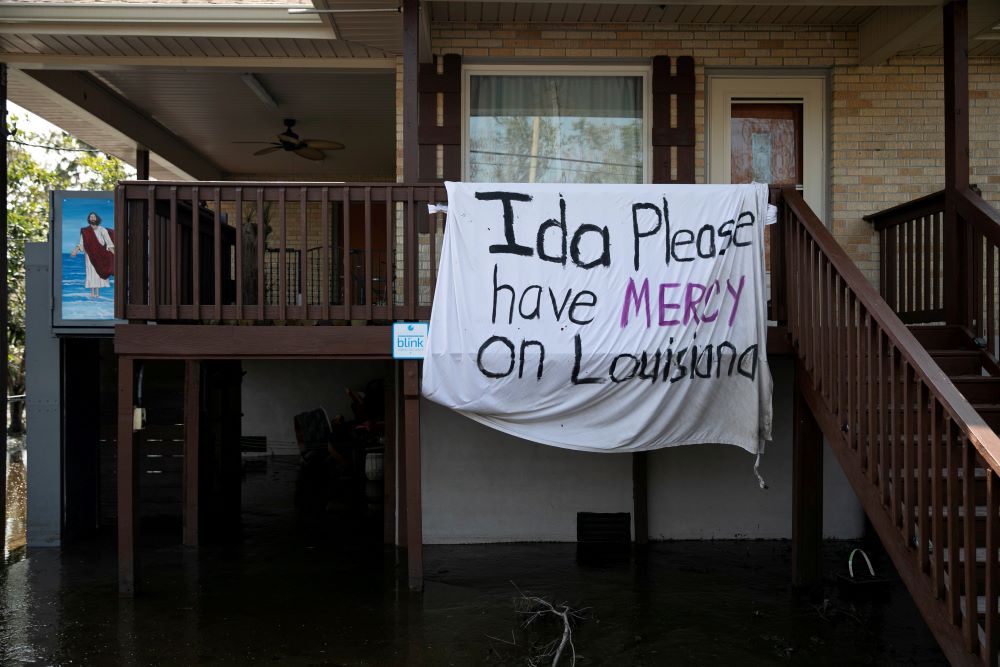 A blanket hangs outside a house in Jean Lafitte, La., Sept. 2 following Hurricane Ida's landfall. Several ministers at an Aug. 26 event said that faith leaders have been quiet for too long on environmental matters or have been waiting for a safety net when disaster strikes, rather than advocating for solutions to prevent problems before they happen. (CNS/Reuters/Marco Bello)

As twin trillion-dollar legislative packages, each carrying significant climate investments, make their way through a critical month in Congress, faith-based environmental groups are rallying religious support to buttress the bills that some are calling "the most important political window on climate action that we have ever faced."

Together, they would represent the largest federal investments in U.S. history to slash greenhouse gas emissions causing global warming and to build resilience around the country to the increasing impacts of climate change.

The bills would pump hundreds of billions of dollars over the next decade into programs to transition the national electric grid to clean energy, expand public transportation and broadband access, reduce pollution, fortify cities and communities for the impacts of climate change and create a Civilian Climate Corps to work on climate resilience and protection.

The legislation also forms the basis of the revised U.S. pledge under the Paris Agreement on climate change to cut the nation's emissions by 50% to 52% from 2005 levels by 2030.

Both bills could see votes in Congress in September. Democratic House Speaker Nancy Pelosi has pledged not to bring the infrastructure bill, which received support from 19 Republican senators, to the floor until the larger spending plan passes the Senate, but has set a Sept. 27 deadline to pass the bill. The $3.5 trillion bill is moving through a budget process called reconciliation, which requires only a simple majority to pass in the Senate, where the 10-year spending package has not garnered any Republican support.

"The next month is the most important political window on climate action that we have ever faced," Avery Davis Lamb, co-executive director of Creation Justice Ministries, said during an Aug. 26 online event spotlighting faith communities on the frontlines of climate change.

The webinar, which included messages from North Carolina Rep. Deborah Ross and a staff member for Virginia Rep. Donald McEachin, came a day before a national faith call-in day for climate action, where more than 550 people made upwards of 600 calls to members of Congress urging their support for the reconciliation bill. The action was sponsored by a dozen faith organizations, including the Sisters of Mercy of the Americas. Another interfaith update on the legislation is set for Sept. 10.

The Catholic Climate Covenant has also worked to gather signatures from individuals and institutions for its Catholic Appeal for Climate Action to lend support to both bills' climate policies.

Several ministers at the Aug. 26 event said that faith leaders overall have been quiet for too long on environmental matters or have been standing back and waiting to be a safety net when disaster strikes, rather than advocating for solutions to prevent problems before they happen.

"As faith leaders, it's time for us to stir some things up," said Rev. Lynn Godette, pastor of St. Paul AME Zion Church in Aurora, North Carolina. "We've been quiet, we've been not wanting to get, as we would say, political. But it's time for us to reach out to our political leaders and stir up some things so that we can bring hope back, yes, to our communities, bring hope back for our environment."

"Now more than ever we need to be asking for significant investments in action on climate justice and resilience, because this is the moment for our congressional representatives to demonstrate moral leadership on climate. They need to know that as people of faith we expect them to lead on climate change," Lamb said.

"It is an absolutely imperative investment, and it is crucial both for God's creation and for our communities that this bill passes."

Environmental faith groups have identified funding priorities for the legislation, among them:

They also support tax credits for green energy, but they say such incentives must be limited to truly clean energy sources and not include natural gas. A tax on carbon emissions, which could be redistributed to Americans in the form of a dividend, another policy supported by some faith groups, is also being discussed by senators.

Lamb said while the bills include "a lot of good funding," it "is not enough to make the transformative changes that are called for by climate scientists," and likened it to a floor or down payment.

"But it is an absolutely imperative investment, and it is crucial both for God's creation and for our communities that this bill passes," he said. 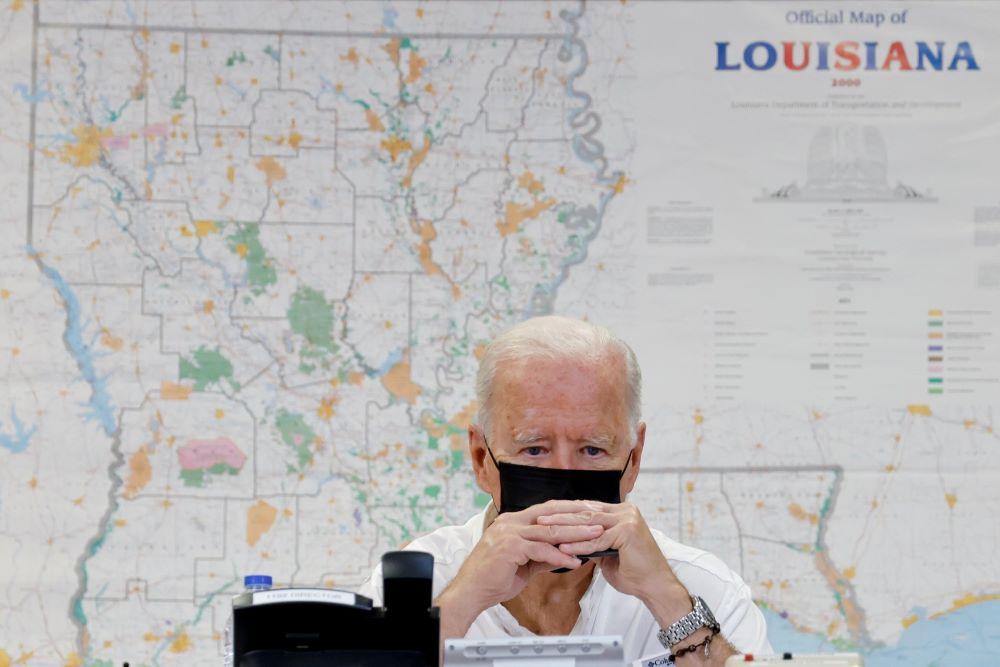 President Joe Biden looks on at the St. John Parish's Emergency Operations Center in LaPlace, La., Sept. 3 as he receives a briefing on the impacts of Hurricane Ida. "Climate change poses an existential threat to our lives, to our economy," Biden said during a Sept. 7 visit to communities hit by the aftermath of Hurricane Ida in New Jersey. (CNS/Reuters/Jonathan Ernst)

The path to the president's signature remains rocky.

Democratic leaders have tied the two bills together in an effort to appease various factions in the party. Meanwhile, with the reconciliation package unlikely to receive Republican support, all 50 senators in the Democratic caucus will have to be on board to set up a tie-breaking vote by Vice President Kamala Harris.

Days after the faith call drive, the legislation hit a new hurdle when Sen. Joe Manchin, the Catholic Democrat from West Virginia who chairs the Energy and Natural Resources Committee tasked with writing some of the budget bill's major climate programs, suggested in a Sept. 2 Wall Street Journal op-ed that his colleagues "hit the pause button" on the reconciliation package and reiterated his concern with its $3.5 trillion price tag.

Environmental groups were quick to criticize Manchin, arguing that the total has already been negotiated down and resurfacing his ties to ExxonMobil lobbyists, which came to light earlier this year. The Rev. William Barber, co-founder of the Poor People's Campaign, wrote on Twitter that Manchin's fellow senators should "hit pause on him and expose how toxic he is."

As the planet has warmed, the number of weather-related disasters worldwide has increased fivefold in the past 50 years, according to a new report from the World Meteorological Organization. The costs have also skyrocketed, with weather disasters from 2010-19 costing on average $383 million per day, compared to $49 million from 1970-79. In 2020, extreme weather piled up $95 billion in damages, and was the sixth consecutive year with 10 or more billion-dollar disasters, according to the National Ocean and Atmospheric Administration. Since 1980, extreme weather events have cost the U.S. $1.88 trillion.

While visiting communities hit by the aftermath of Hurricane Ida in New Jersey Sept. 7, Biden said that this summer's extreme weather across the country — from Ida coming ashore in the Gulf as one of the strongest storms to hit the U.S. to historic wildfires out west — show the impacts of climate change that scientists have predicted for decades are here.

"Folks, the evidence is clear: Climate change poses an existential threat to our lives, to our economy. And the threat is here; it's not going to get any better. The question: Can it get worse? We can stop it from getting worse," Biden said.

The faith and climate resiliency event featured video testimonials from congregations on the coasts of North Carolina and Georgia about how increased flooding is hitting their communities. At St. Paul AME Zion Church in Aurora, off North Carolina's central cost, the repeated pattern of major storms followed by rebuilding has thinned the population and the number of people in the pews.

Asked what would happen if no actions or investments are made in the face of rising seas and climate change, the Rev. Gerald Godette, associate pastor at St. Paul, replied, "Death to a community is what would happen. Our people are leaving after these storms, and many can't come back."

Hermina Glass-Hill, coastal and environmental justice coordinator for Georgia Interfaith Power & Light, said she hopes their stories will help policymakers see the impact that increasingly intense storms are having on their communities and compel them to support solutions, especially for those who can't flee the flooding.

"The infrastructure definitely needs the kind of funding up and down the coast that's gonna allow people to be resilient and to be able to weather these storms," she said.