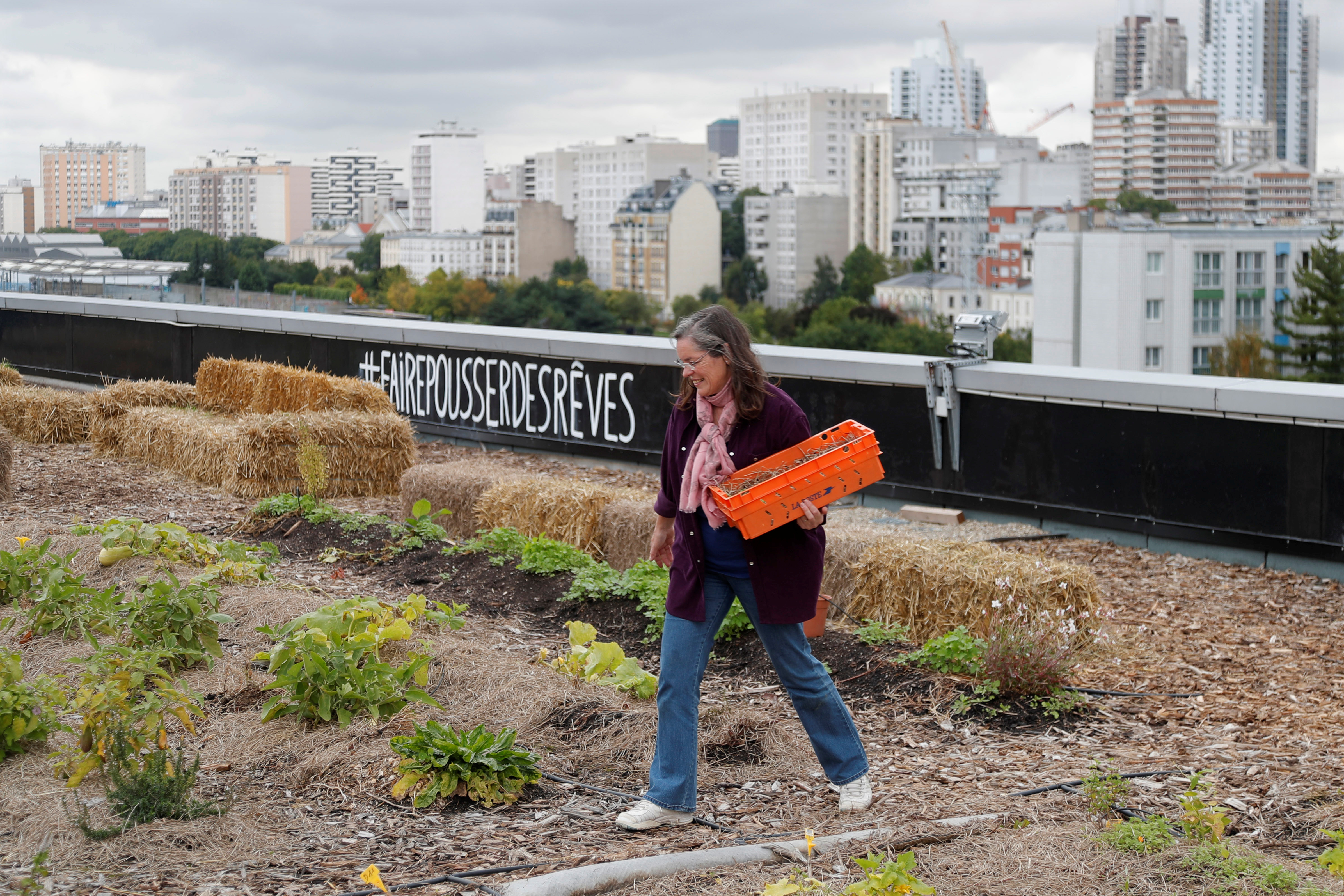 Post office employee harvests vegetables from a garden on the roof of a Paris post office in 2017. The sign reads: "To make dreams grow." (Reuters/Charles Platiau)

Coronavirus lockdowns are pushing more city dwellers to grow fruit and vegetables in their homes, providing a potentially lasting boost to urban farming, architects and food experts said this week.

Confirmed cases of COVID-19, the disease caused by the coronavirus, total more than 2 million, with about 130,000 deaths worldwide, according to a Reuters tally.

Panic buying in some countries during the crisis has led to empty supermarket shelves and an uptick in the purchase of seeds, according to media reports.

"More people are thinking about where their food comes from, how easily it can be disrupted, and how to reduce disruptions," said landscape architect Kotchakorn Voraakhom, who designed Asia's largest urban rooftop farm in Bangkok.

"People, planners and governments should all be rethinking how land is used in cities. Urban farming can improve food security and nutrition, reduce climate change impacts, and lower stress," she told the Thomson Reuters Foundation.

More than two-thirds of the world's population is forecast to live in cities by 2050, according to the United Nations.

Urban agriculture can be crucial to feeding them, potentially producing as much as 180 million tons of food a year - or about 10% of the global output of pulses and vegetables, according to a 2018 study published in the journal Earth's Future.

The Food and Agriculture Organization of the United Nations (FAO) reported that the pandemic "could quickly put a strain on the food supply chains, a complex web of interactions involving farmers, agricultural inputs, processing plants, shipping, retailers and more."

The coronavirus outbreak is not the first time that concerns about food security have led to more kitchen gardens.

The effort continued during World War Two, with vegetable gardens in backyards and schoolyards, on unused land, and even the front lawn of the White House.

In recent decades, the fast pace of urbanization in developing countries is causing urban malnutrition, the Food and Agriculture Organization said, calling on planners to become "nutrition partners" and pay attention to food security.

Despite pressure on land to build homes and roads, there is more than enough urban land available within UK cities to meet the fruit and vegetable requirements of its population, researchers at the Institute for Sustainable Food at Britain's University of Sheffield said in a study last month.

In tiny Singapore, one of the wealthiest nations in Asia that imports more than 90% of its food, urban farming including vertical and rooftop farms, is fast becoming popular.

The city-state, which ranks on top of the Economist Intelligence Unit's global food security index for 2019, aims to produce 30% of its nutritional needs by 2030, by increasing the local supply of fruits, vegetables and protein from meat and fish.

On Monday, Singapore lawmaker Ang Wei Neng said that during the coronavirus outbreak, "it would be wise for us to think of how to invest in homegrown food".

For Allan Lim, chief executive of ComCrop, a commercial urban farm in Singapore, the pandemic is a reminder that disruptions to food supplies can take place at any time.

"It has definitely sparked more interest in local produce. Urban farms can be a shock absorber during disruptions such as this," he said.

[This story was made possible by Thomson Reuters Foundation, the charitable arm of Thomson Reuters that covers the lives of people around the world who struggle to live freely or fairly.]