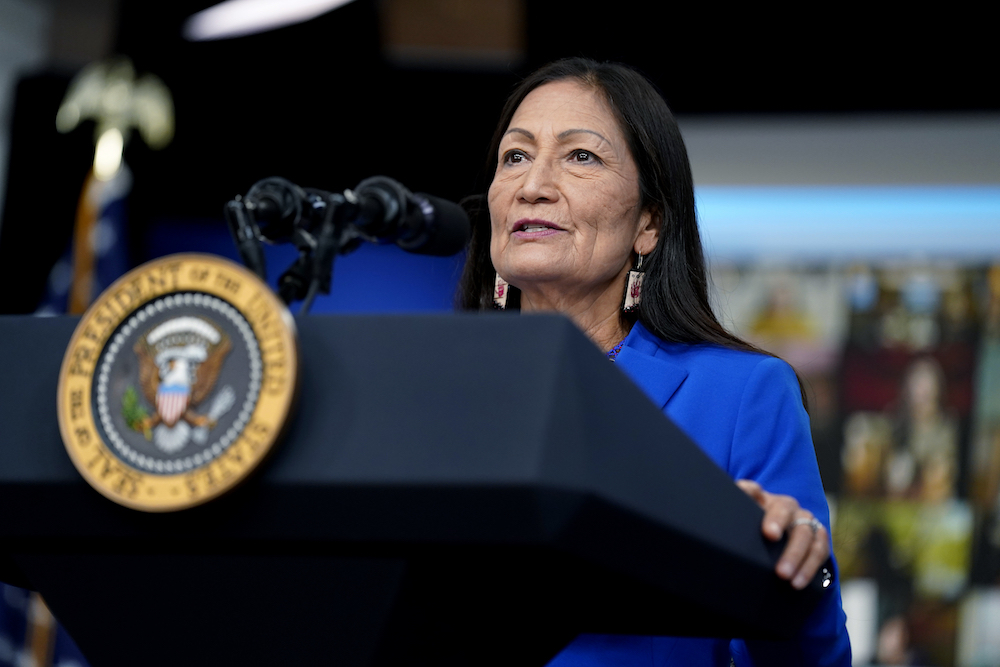 U.S. Interior Secretary Deb Haaland has announced a new initiative to protect and improve access to sites across the United States considered sacred by Indigenous peoples.

"Since time immemorial, the Earth's lands and waters have been central to the social, cultural, spiritual, mental, and physical wellbeing of Indigenous peoples. It is essential that we do everything we can to honor sites that hold historical, spiritual or ceremonial significance," she said in a written statement from the U.S. Department of the Interior.

"The Interior Department is committed to protecting these sacred sites from desecration, while at the same time collaborating with Indigenous communities to increase access and ensure good stewardship of their lands."

Haaland, a member of the Pueblo of Laguna, is the first Native American to serve as a U.S. Cabinet secretary.

Eight agencies have signed on to a memorandum of understanding aimed at improving interdepartmental coordination, according to the Department of the Interior. They include the U.S. departments of the Interior, Agriculture, Transportation and Energy, as well as the Environmental Protection Agency, the White House Council on Environmental Quality, the Advisory Council on Historic Preservation and the Tennessee Valley Authority.

The 14-page memorandum directs those agencies — which are responsible for the management of federal lands and waters — to develop consistent policies and processes for sites held sacred by Indigenous peoples.

It says they should take a "forward-thinking" approach that not only seeks to avoid harm, but also to "collaborate with Indian Tribes and Native Hawaiian organizations to ensure good stewardship of their lands and allow their rightful access and use to certain public lands through Tribal-agency and co-management agreements, where possible."

The memorandum also establishes a working group with members from each agency to enhance their collaboration and address significant issues as they arise.

Indigenous peoples have creation narratives tied to sites in every region of the U.S. and beyond, and maintaining a connection to those places is essential to their spiritual practice and existence, according to the memorandum.

The desecration of those sacred sites and the relocation of Native Americans, Alaska Natives and Native Hawaiians away from them has had traumatic effects on the peoples' spiritual well-being, as well as their social, cultural, mental and physical health, it said.

"Indian Tribes, the Native Hawaiian Community, and Indigenous peoples share an essential truth of the interconnectedness to nature and all life," the memorandum said.

Controversies over the use of such sacred sites have made headlines in recent years, beginning with action to halt the construction of the Dakota Access pipeline on the Standing Rock Sioux Reservation in 2016.

More recently, Indigenous peoples have shared differing visions for Bears Ears National Monument, restored to its original boundaries in Utah last month by the Biden administration. They have also organized a "spiritual convoy" to stop the transfer of Oak Flat, an Apache sacred site in Arizona, to a mining company.